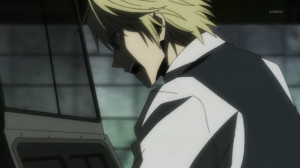 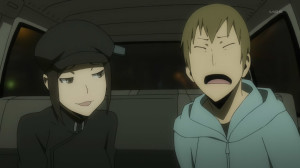 So I had to do this episode with 16, as college got exceedingly insane and tore out most of my time. A week of all nighters later, I finally get around to watching episodes 15 and 16.

Episode 15 was decent. The first half does well to introduce Niekawa and his whole fascination with Shizou. It also serves to tell us that, nuff said, Shizou IS the strongest in Ikebukuro. The guy is literally a heartless monster as he grabs the door and smashes right into poor Niekawa (which I did cringe at cause it sounded PAINFUL). He’ll survive though, as that guy is insane to the extreme. I mean, being hit with a friggin pole didn’t kill him XD

That said, the comments by Walker were darn entertaining. The Walker and Erika pair is pretty fun, and while they can’t live up to the Isaac and Miria pairing, they come pretty darn close. I especially laughed at Walker’s idea of a “simple” lifestyle XD

As a stand alone episode, I can’t give this a solid A, if only because the next episode just goes above and beyond. I would have been really annoyed had I seen this and had to wait another week to see what happened. The most annoying of cliffhangers I’d say. The next episode does use this as a HUGE building block. All the wait definitely pays off then, so I don’t think this was an unnecessary episode at all.

Of course, that makes me wonder, would it be 10x more fun to watch Durarara!! in one go? XD

Since I couldn’t get this episode done on time, there’s no preview. Just go straight to the next episode XD