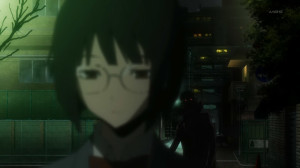 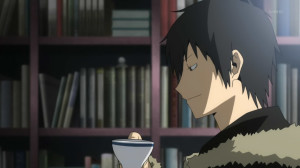 The next big event seems to be taking form. This episode had a good dose of story, humor and some very nice character moments. There isn’t much in terms of actual action but the plot progresses significantly as a few key things are revealed.

We know how Celty lost her head, and who did it. Shinra’s dad is quite the interesting and funny character. I especially loved how he wrote down “Father” and asked Celty to call him that. Later he also got the drop on Namie and had her let him in with a toy pistol XD. He seems like the typical mad scientist, and he’s all for letting Izaya do whatever he wants with the head. The question though, is whether Shinra knows about the head, and if he’s okay with what’s about to happen.

Izaya is definitely planning on orchestrating a major event that will put everyone who even remotely knows Celty in danger. I’m guessing the series is going to have a very dark tone as the plot thickens. Unlike Baccano!, I can’t see Durarara!! keeping that light hearted feel. Izaya is slowing making his way towards being the main antagonist.

He’s also like a big brother figure to Mikado, but as I’m sure Kida can attest to, that isn’t going to end well. Speaking of Kida, it really seems like he’s thinking of going back to the Yellow scarves. I’m sure we’ll learn more about what happened between him, Saki and Izaya in an episode or two. The question is though, if Kida does go back to the yellow scarves, he will be going against Mikado and the Dollars, something that Izaya probably wants.

The Slasher story seems to be coming to a conclusion, as we now know that its actually the demon sword Saika, and that its after Anri for some reason. I’m guessing Mikado, Celty and maybe Shizou will go against this, with probably Izaya pulling the strings on the side. All in all, things are progressing, plot threads are intertwining, and If you’re not watching this series, get out from under that rock and do it NOW! XD 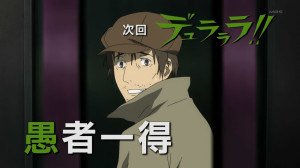 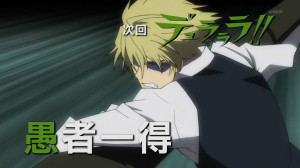 Seems like a new detective dude is going to come into the fray of things. Also, We’ll get to see more of Dotachin and the gang, and that always leads to good comedic fun! Seems like the slasher and Anri story is going to be progressing too!