Adult Swim to Air Kekkaishi in May 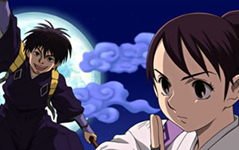 “Adult Swim, the late-night television programming block of Cartoon Network in the United States, lists the American television premiere of the Kekkaishi anime during the May 29-30 weekend on its online schedule. Viz Media announced that it had acquired the television anime series at Comic-Con International last July. The Sunrise anime studio adapted Yellow Tanabe’s Kekkaishi manga into 52 episodes from 2006 to 2008.”

Plot Summary: Sumimura Yoshimori, a 14-year-old junior high school boy, is a descendant of Kekkaishi, or an exterminator of monsters He is vying for the heir to the family with Yumikura Tokine. Tokine is older than him, and she is his childhood friend as well as his rival Kekkaishi. To save people from the crises, and to make himself stronger, Yoshimori fights against monsters tonight, too.

Kind of a disappointment, in my not so humble opinion. I was hoping for something like Darker Than Black, but we still have one more anime to be announced that apparently AS has acquired and will be airing.

Discuss the news story here over at the forums.