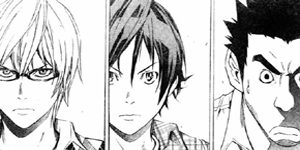 Viz will release the first volume of Bakuman, a Shonen Jump title by the Death Note team (Tsugumi Ohba, writer, and Takeshi Obata, who’s also well known for Hikaru No Go, artist), in August. The series was very popular in Japan, where it has spawned an anime series premiering this year. The story concerns two 9th graders who want to be manga-ka.

Two other manga are also set to be released: Dengeki Daisy, by Kyousuke Motomi and Seiho Boys High School, a shojo manga by Kaneyoshi Izumi. You can expect Dengeki in July and Seiho in August.