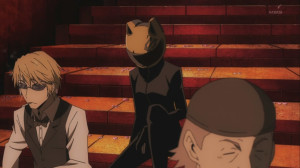 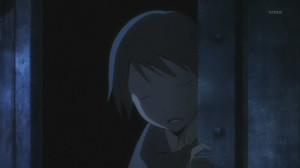 After a good dose of three solid episodes, Durarara!!! finally gets its first “slightly weak” episode. I’ll say this  quite frankly, this episode just didn’t fit in with the feel and world that the show has crafted so wonderfully in the  last three episodes. Ikebukuro and the show itself had a very japanese, urban theme and feel to it something that really contrasts to the very European themed Baccano!

Along comes the backstory of the Headless Rider, Selty, and while its a decent and unique story, I couldn’t help but feel that it didn’t fit into the  grand scheme of things at all. The whole Irish, Celtic Folklore stuff is a nice and original idea, but I’d have almost preferred something more in tune with the japanese feel the show has been projecting.

I guess you could say that the execution of the concept isn’t as good  maybe? The way the story was told, as a video from Shinra was possibly not the best way to do it? I’m not entirely sure. I do love how Durarara!!! strives to do the things it does and do it in an original and unique way. This is NOT Baccano! I understand that, but I think Durarara!! sorta misses one hit that Baccano! never did, and that was the integration of the supernatural, fantasy stuff perfectly into the world and universe they’ve established.

That said, the episode wasn’t without merits. The whole backstory on Selty was imaginative and unique, even if it didn’t fit in as well with the rest of the story. The other characters playing a part in her backstory was pretty fun and nice to see. I like how Durarara!!! sense of time is more or less based on each story arc. There’s a sense of cohession in the sense that each little plot arc resolves before the next event starts, whatever its chronological order. It pays off a lot more to the viewer, rather than the choatic style that Baccano! had.

There was also the fact that Celty has a voice, even if its only for the viewers to hear. This gives her a lot more depth AND character, and it also kinda showed us that the narrator in the second episode was obviously her. I do like this narration style thing that Durarara!!! has been doing in literally every episode. Its entertaining, and it sorta gives the show a very story like feel, something that I’d call masterful adaption from a novel to an animated series.

That said, I should really just review Baccano! and stop comparing Durarara!!! to it. They really are two different beasts, but I simply can’t help it, as while there aren’t a lot of parallels to the two stories beyond the animation studio and original author, they both provide something really unique and different in the anime offerings  of today. Something the anime industry definitely needs! 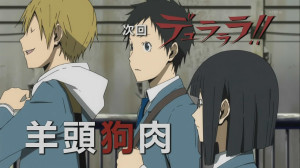 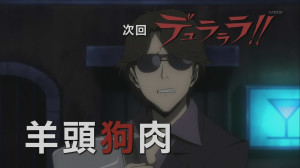 Its back to Kida, Ryugamine and Anri this time! I personally am not that interested in the whole Ryugamine and Anri love thing going on, but Kida is definitely one of the entertaining characters this show has, so I’m pretty sure next episode should be fairly good!