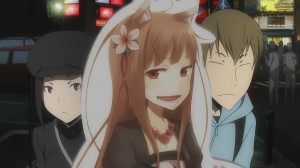 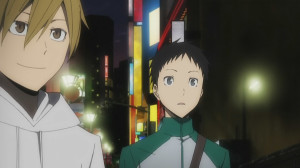 The First episode basically introduces a bunch of characters and the area where the show is going to take place in. With Kida serving as a guide for his chilhood friend Ryugamine, who has just moved to Tokyo, we’re taken around the Ikebukuro district, and introduced to a bunch of characters.

They first run into Erika and Walker, who are taking a huge “Horro” board with them (Horro from Spice and Wolf, cameos ftw). They’re also meet Kadoka and Togusa, who are in the truck where the Horro board is being carried. Following their walk around the area, they also run into a Russian Tout for a Sushi shop named Simon, who is quite the interesting fellow. As they move on, they see a man chuck at vending machine into the air. Kida explains that its a man named Shizuo Heiwajima, and that its best to stay away from him.

On another side of town, a girl named Magenta is kidnapped by a bunch of hoodlums. The Truck carrying her is then attacked by a weird biker, with a yellow helment and a black bike, known as the “black biker” in urban legends. Two of the thugs are killed, while the third runs away in the truck, with the biker giving chase. The car suddenly stops, and the Biker falls off his bike and lands on the road.

As the thug jumps out of the truck to survey the corpse, he finds that the biker has no head, and that some black mist is coming out of the neck. A scythe is produced from the Mist, and the Biker uses it to slash the thug. The thug topples to the floor, confused and shock.

Back in Ikebukuro, Ryugamine and Kida run into a girl, who apparently seems to have a scar on her neck. The girl suddenly runs away. Rida and Ryugamine suddenly run to the road, where they see the Urban Legend, the Black Biker, riding off right infront of them. 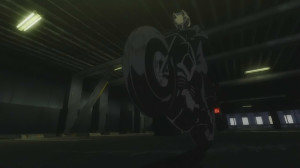 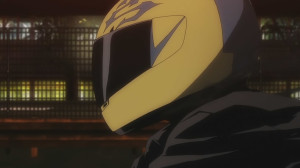 As expected of the team that did Baccano! This seems to be a stellar and very entertaining series. The story telling style seems similar to Baccano!, and the Anime looks to be very character driven. From what I’ve seen so far, it seems like a lot of these characters will NOT dissapoint. The cast looks be an extremely unique and colorful collection of characters.That said, I do think the Black Biker thing seemed a bit out of place. It does look interesting though, whatever it is.

I also love how this show is focusing more on a specific area of Tokyo, and the myths and legends regarding that area add a great deal of depth and realism. One thing with baccano! was that it happened all over the place, and the area where most of the characters were didn’t have as much of an identity. Eitherway, its safe to say that I’ll be watching and blogging this show like mad. Awesome stuff 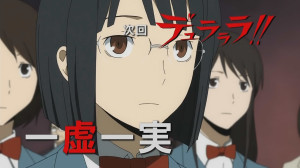 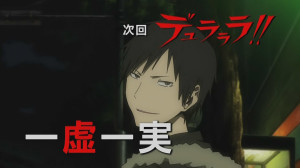 Seems like we’ll get introduced to a few more characters next episode. The currently started Black Biker story will also be progressing, so it should be quite interesting to see how the story unfolds on that end.