Needless is this season’s flashy summer blockbuster action series. There’s tons of flashy moves, lots of trash talk between the characters and there’s even a heavy dose of fan-service to boot. Needless is a pretty entertaining show, provided you set your expectations of the show to the right degree. If its complex plots, serious, believable characters and original concepts instead of tried and true cliches, then its best to look elsewhere. If you’re looking for a show that packs a lot of punch in its action, has a metal OST that resembles that of the Guilty Gear series and has fan-service that is second only to series like Ikkitousen, however, then you’re definitely looking in the right place. 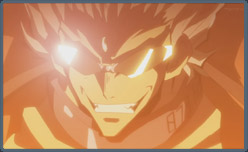 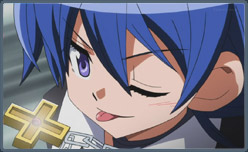 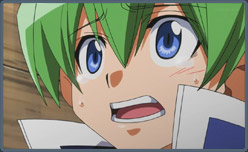 Needless revolves around the exploits of a fake priest Adam Blade, his partner Eve and the orphan Cruz that runs into them when his resistance faction is obliterated by an evil corporation called Simeon, all set in the year 2130, after the third World war. The story is obviously set in a sci-fi setting, and most of the characters have abilities thanks to fragments of a person’s power who called himself the second and saved Japan after the third world war. It gets a bit more developed from there, but as you can see, the idea behind Needless is nothing special and pretty cookie cutter.

The show rarely takes itself or its plot seriously, thankfully. The show is intended to be a humorous, Gaar-ish (Think Gurren Lagann) entertaining show of various abilities and battles. The action scenes in Needless are very very flashy and cool, and its almost like the sci-fi setting of Scryed mixed with Dragon Ball Z meshed with Guilty Gear’s art style and the added Gurren Lagann “Gaar” for the extra topping. It’s in no ways original, but it surprisingly works to the degree where you’ll enjoy it. There are plot-twists, but purely added in for shock value rather than to make you go: “Wow… that’s deep”. There’s also a bit of the tried and true comedy elements thrown in, which only add to the “non-serious” and snazzy feeling the show seems to generate.  At the end of it all, the story is just padding for the action, which is good, clean and simple fun in one explosive package. 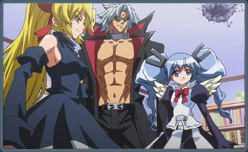 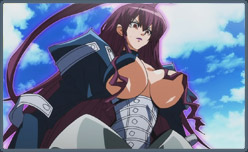 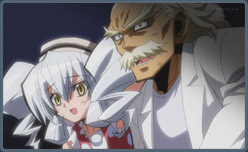 The plot is largely forgettable, and even the characters aren’t very memorable, as they combine cliches and past characters from a host of popular anime. For the anime fan, especially one that’s seen a lot of shows, there’s all sorts of parallels and relations to be made. It’s tough to hate the shows characters, since they resemble fan favorites from across the anime industry. The designs are very over the top, focusing on fan service and outlandish designs that will entertain. The design style seems very similar to the popular fighting game series Guilty Gear. The characters and their interactions borrow heavily from another show, Scryed, from which a ton of parallels can be drawn.

Characters and plot aside, the action is where the real entertainment can be had. The action scenes are pretty well animated, with animations for attacks and the battles themselves very well done. There is a bit of recycling and there’s also a drop in quality for a few seconds every now and then, but its rarely noticeable. The Budget and animation were managed very well, and it keeps the fights and the action interesting. The comedy elements are where the animation becomes basic, but they add some comedy relief in-between all the screams, shouts and punches, so it’s not a bad thing.

The music is also quite impressive, with two very impressive, intense opening themes and two somewhat odd but funny ending themes too. The rest of the track borrows heavily from the heavy metal track style that the Guilty Gear/BlazBlue series is known for (and if you haven’t played those games and liked this show, then it’s a good idea to give them a look). The Voice acting is pretty decent, with the emotions of the characters portrayed well, even if somewhat over the top. Considering the series tries to be this over the top, flashy festival, it works well though, and it can’t be argued that the intense-ness is not intentional. 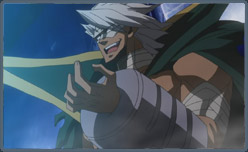 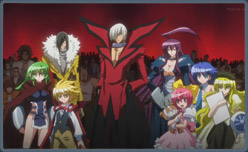 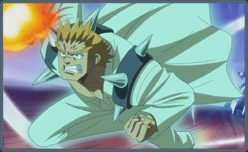 All in all, Needless is a fun little show. It’ll keep you entertained and won’t really move you much. People looking for a seriously impressive and memorable experience would have a better time watching something else. For those who just want a good brawl fest with flashy moves and a good dose of comedy and fan-service, this is definitely a great show to blast a few days off on, even if you won’t really remember it much after that. We award it with a B Grade.