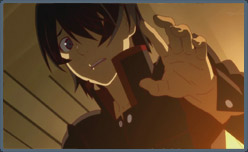 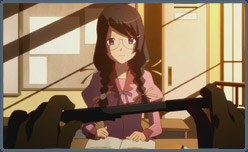 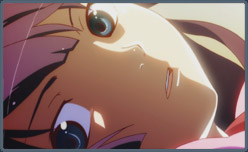 Alright, so Bakemonogatari is the new show from SHAFT (who are really on a roll this season). Bakemonogatari tells the tale of Araragi, a kid who’s actually had quite a few run-ins with the supernatural. All of his such run-ins seem to involve women somehow… *smirk*

The anime ‘s story revolves around Araragi and the various girls he meets and helps out. Each girl has some sort of problem of a rather supernatural nature. Araragi being the nice guy, goes out of his way to help them out.
So how exactly did the first 5 Episodes (and First two arcs) of the series fare?

Well I’d definitely say that the early episodes left a positive impression on me. The main character is sorta unique and Kamiya Hiroshi (his Voice Actor/Seiyuu) has done a terrific job on developing his character. Araragi comes off as the typical nice, helpful guy and has a good deal of wit and sarcasm to throw your way without seeming like too much of an ass or seeming annoyed (A nice contrast Kyon from Haruhi Suzumiya, who pioneered the “sarcastic monologue” tradition in anime…)

As for the other characters, namely, the girls, they’re actually quite interesting. A nice breath of fresh air in a time when we get a lot of generic stereotypical female characters. Senjogahara is a nice twist on the typical Tsundere, Hachikuji is a slightly different loli character and Hanekawa is pretty much the smart, glasses type modest girl (who’s NOT SHY for a change!). I’m sure we’ll see more diverse and intriguing characters in the coming episodes as well.

The meat of this anime, much like any other SHAFT Production, is in the dialogue and the conversations between the characters. Sure there’s some animation and action every now and then, but it’s kept to a bare minimum. The characters and their interaction is the focus, and while it definitely works, it will seem all too familiar to anyone who’s seen either any of SHAFT’s previous works (Ef: A Tale of Memories/Melodies, Zetsubo Sensei e.t.c).

What really prevents the show from standing out is that it’s too much like a typical SHAFT anime. What works well on a show like Zetsubo sensei (all those random static images, and tilled symbols for example) doesn’t seem quite as right in an anime that deals with the Supernatural. SHAFT have really outdone themselves with some of the animation they’ve done on the show’s more dynamic scenes. We’re rarely, however, treated to these scenes and the bulk is a collection static images, or scenes with minimal animation.
I don’t know if it’s budget constraints, or just a SHAFT thing, but the whole “lack of dynamic animated scenes” is sorta what really hurts this show. The dialogue is interesting, but you can’t help but feel a slight sense of boredom at the fact that you’re just watching two people talk most of the time.

One character comes in, talks with the main character. Said character leaves, and another shows up. And of course, there’s never more than 3 character on screen at once. That really makes this seem like more of a play.

The character designs are definitely impressive, but the backgrounds and backdrops leave something to be desired, again I’m probably guessing budget constraints. The Art is overall good, but there’s obviously an absence of detail in everything beyond the characters (especially the backgrounds). 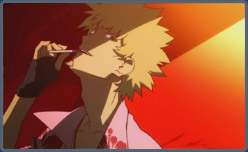 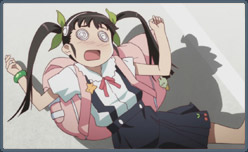 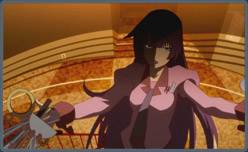 All in all, Bakemonogatari is a pretty intriguing show. Sure, it’s got that typical SHAFT flare in it, which at times actually seems out of place. It is, none the less, pretty interesting. It isn’t for everyone though.

This is one of the shows that’s appealed to me this season. I’ll definitely be blogging this from Episode 6 onwards.