If there’s one genre that’s had an influx of titles in the last few years, it’s the Mecha genre. An anime about Robots, set in a post apocalyptic world is no stranger to the rather growing and expanding amount of titles in the Mecha Genre. One may even go as far as to say it’s a bit too common. So what does Innocent Venus do to set itself apart from the rest? Not much really…

Innocent Venus is your run of the mill Mecha anime about two guys trying to protect a small girl amidst a world that’s been torn apart due to a natural disaster. 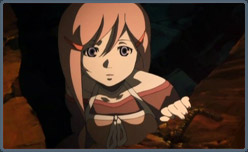 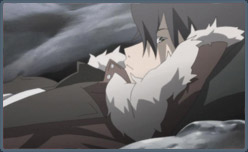 The story follows the two protagonists Jin and Jo, as they evade the corrupt government and a gang of highly skilled government agents, all in order to protect a girl named Sana. Sana seems to have some hidden power that everyone’s going crazy over (where have I heard this before?). Of course, things are never as they seem, and the story suddenly takes a dramatic change of events as the motives of many of the key players in the story become clear and shocking revelations follow.

The story and plot for Innocent Venus seem stale, unoriginal and pretty forgettable at first, and they mostly stay that way if not for a major plot twist. Said plot twist occurs at around episode 8 of the series, and while the plot twist is pretty amazing and really brings the anime up by a few notches, it just comes in too late. The anime is a 12 episode series, and for about 8 episodes you get a rather boring and uninteresting story that you could care less about or even bother to watch.

Most of the eight episodes are about the two main characters and the damsel in distress playing cat and mouse with their pursuers. Of course, this is probably a setup to be able to properly introduce all the major characters and build some feeling of attachment towards them. Which in theory is fine, since the last 4 episodes make this series “seem” like it’s really worth the watch. Everything that’s been done at the start of the series begins to not only make sense, but seems like it’s a stroke of pure genius. It’s quite sad that the majority of the series isn’t fleshed out properly and most viewers will probably quit before the much awaited plot twist even occurs. If they don’t quit, they’ll probably be too put off to really care. This and this alone, is the series’ major flaw.

There are other small things that really stick out as well. There’s a huge amount of unoriginality, such as how the whole idea of what the Mechs in the anime really are is a page straight out of Neon Genesis Evangelion. It’s not identical thankfully, but the basic idea behind the mechs is borrowed heavily from NGE. To make matters worse, the main characters in the anime are just not interesting or unique. While the plot twist near the end DOES give them a much needed face lift, it’s beyond ignorable that they’re pretty much generic and shallow characters that provide little interest to the viewer for more than half the series.

The cast of characters have pretty much the same problem as the story they’re in. The personalities of the anime’s characters appear rather stale and shallow, until you guessed it, episode 8! This is where a lot of things happen and a few characters show their true identities and agendas. Suddenly, some of the major characters have impressive back stories, deep and somewhat original characteristics and even become interesting! It’s just a darn shame that this happens waay too late in the series. 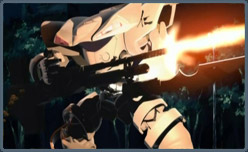 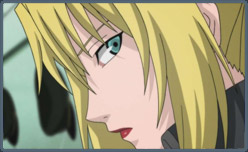 Animation fares better than the rest of the shows areas, and remains splendid throughout. Whether it’s the mecha scenes, the character fist fights or just a simplistic driving scene, everything from the backgrounds to the character’s facial expressions are done nicely.  While there’s nothing really revolutionary or jaw dropping about the animation, it’s done well and with a nice mesh of 3D and 2D animation to boot.

The Artwork, is sorta both good and bad, depending on where you look. The character designs, the backgrounds, locations and everything else is just fine and pretty well done. The Mecha designs, however, are some of the most disappointing seen to date. It’s such a shame that such well animated mecha scenes really suffer because of rather ugly and annoying Mecha designs that are really not all that interesting to look at. Mostly the Mechs are just cellshaded blocks with eyes, arms and legs on them. And since the emphasis of this anime is pretty much it’s mecha element, it’s a real shame that it doesn’t deliver on that front as much as it should.

Finally, the sound and music are pretty much… just decent. The voice acting is done pretty well, and some characters are definitely given an added layer of depth thanks to the hard work put in by their voice actors. The music in the anime however, has it’s ups and downs. There’s not much music in the anime to begin with, but when it’s there, it’s pretty good. The classical music pieces played on the piano for instance, are especially nice. The Opening and Ending themes though, are average at best. All in all, the sound department fares well, and maintains a consistent level of quality (average) throughout. 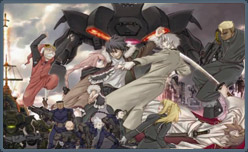 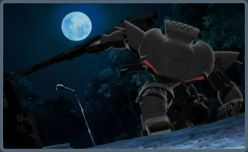 Whatever the reason, Innocent Venus remains an average choppy generic Mecha anime till it’s 8th episode, and from there it rises to something a bit more special and unique. It’s a tad bit sad that most people won’t be able to bear the 8 episodes of boredom.

It’s because of this rather stingy flaw, that Innocent Venus is tough to recommend. It may be worth a watch, but only if you’re a really really patient person. Overall, we give it a C.