Tengen Toppa Gurren Lagann is in one word “revolutionary”. It’s a perfect example of how far the anime industry has come in recent years. Calling it the pinnacle of the animation industry would be a fitting term for this master piece. It seems that the makers of FLCL, Gainax have gone where no Anime producer could’ve gone before, and very impressively so.

Gurren Lagann is an evolved product of the Japanese animation industry, setting new standards for the entire industry. It is only fitting that the basic underlying theme this anime tackles is also centered around “progress” and “evolution”. Taking a modest start, the anime slowly grows and develops it story and characters, ultimately building up to a tale of epic proportions. All of this and more is done in the rather impressive and constrictive episode length of 27 episodes, which is an impressive feat on it’s own. 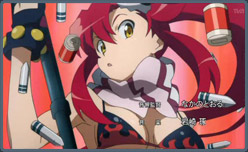 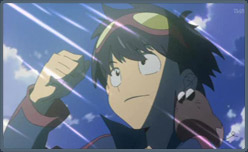 The story revolves around Simon and his brother Kamina. Simon is a boy who lives underground and digs to make a living. In Simon’s world, all humans live underground, surviving at the bare minimum by whatever they can gather. Kamina is a man who aches to advance further and see the surface again that he saw with his father when he was but a child. His prayers are answered when one day a huge mech plunges through the ceiling into their underground village, creating havoc and panic. Meanwhile, Simon digs up an extraordinary weapon, a small mecha, which Kamina later names Lagann. In the ensuing battle, Kamina, Simon and a huntress called Yoko band together to take down the enemy and emerge to the surface. From that point onwards, Kamina and Simon only head further and further down the road to their ultimate goal of going beyond the heavens.

As stated previously the plot of the anime is in one word, “Epic”. The story starts off as being a tale that first leads to the survival of it’s protagonists, to a quest for the freedom of the world, and then finally for a battle to save the Universe itself. Beyond just being so long, a great thing about the plot of the anime is change. Nothing remains the same for too long. Characters die, events happen, people change and this leads to the very world changing as well. The level of complexity of the story also increases with time. Just like a person, Gurren Lagann grows and grows, becoming bigger and better as time passes.

There are quite a few great things about the story, but the best is undoubtedly the character development. Gurren lagann can be said to have three major segments, and in each segment, the characters change and evolve. Each event of the anime matures them, and they grow just like any normal person does. The transition from one time period to the other is done marvelously, with time slip transitions being very smooth.

Simon for example, emerges from being an annoying cowardly kid to a confident leader that inspires the hearts of everyone around him. The great thing about this story is how it’s extremely unpredictable, with twists and turn that will make your jaw drop, and your eyes pop out. Particularly, a huge event in the first five episodes alone stuns, bewilders and shocks you to the point where it seems like the anime may have prematurely killed itself. Much to your surprise, however, Tengen Toppa Gurren Lagann only gets better as it progresses.

Gurren Lagann has a killer story, but it’s amazing plot would be nothing without it’s amazing cast of characters that take the huge burden of the story on their shoulders and drive it along. It can be arguably said that Kamina himself is the main star for the first few episodes, and amazingly drives everyone and everything in the story. Then the other characters get their own chances to shine as the story continues. Simon, who’s always overshadowed by his “Aniki” (Brother figure) slowly becomes his own man, while continuing the traditions and ideas of his brother, and you see more and more of Kamina in his younger brother. 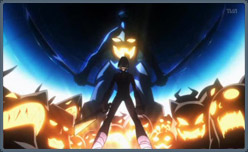 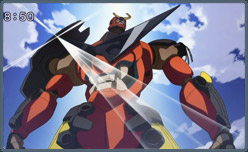 Many characters come in, and not one of them feel useless at all. The series is jam packed with lovable characters, both as inspiring heroes and as cool villains. It’s amazing how well all of these characters are maintained, keeping in mind how much they grow and change throughout the series. Even as they mature and change, however, they never stray a bit from their core personalities and that’s an amazing accomplishment in its own right. Some characters earn your respect even more as they perform their various role in the stories, while others become hated for their acts.

It’s to the credit of the creators of the characters and how deep and well made they’ve mad them, that they stir up a great deal of emotion in you. When a character dies, it feels like you’ve SEEN someone precious die. When the heroes of the story are in a tough position, you instinctively urge them on and hope they win. It’s the deep amount of emotional involvement that this anime brings out of you, that makes it so special.

Of course, while Gurren Lagann’s major focus is in the characters and not the Mechas, Gurren Lagann has some amazing fight sequences that really pump up the adrenaline in you. And thus, Gurren lagann is an anime that will appeal to both die-hard Mecha genre fans and casual anime watchers as well. It has good doses of action and story, and excels at both.

If there’s one weak element in Tegen Toppa Gurren Lagann, it’s the time it takes for one to get used to the rather “rebelliously” unique art style. The art style seems horrible and annoying to a giant degree when you first watch the anime. he art, however, contributes a lot to the unique style of the anime and before long you begin to appreciate it for what it is. There is also a gradual improvement in the art quality as the series progresses.

Character designs, Mecha Designs and everything also evolves much like the story and general artistic presentation of the anime. In the end, the only real flaw of the art of how it can actually be a reason to put off people from an exceptionally great anime. On the other hand, the trade-off of taking a bit of discomfort in the first episode is the great experience that every anime fan would take way from this show and it’s superb story!

Unlike the art, the animation remains superb from start to finish. The way everything smoothly flows and the way every move, every action is done is just nothing short of jaw dropping. Tegen Toppa Gurren Lagann is an anime that deserves to be watched in nothing short of HD quality. Anything less just doesn’t give the amazing animation justice. Tengen Toppa Gurren Lagann may be a 27 episode series, but it’s clearly been animated with the budget of a 50 episode series. Gainax pulls one over every other animation studio in Japan, and the world. 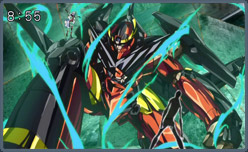 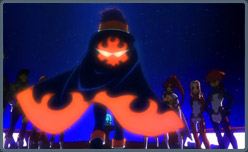 The Sound is also perfect. The voice acting in particular, is exceptional. Half the greatness of the characters comes from their dialogue and how well it’s done by the voice actors. Props to all the voice actors in the anime, as they do a terrific job and add a lot of depth to their characters. The music is also exceptionally well done, from the intro music, to the music used during the battle scenes. The sound is as good as it can get with this anime.

With little flaws, and a great deal of strengths, Tengen Toppa Gurren Lagann is undoubtedly THE anime of 2007 to watch. No reason justifies missing this amazing series, which is set to raise the bar of standards in the anime industry for years to come!