If you have been anywhere near the anime scene within the last year, you must have heard of Death Note. The meteoric popularity and mainstream acclaim of first the manga and later the anime could have spared none but those living under a rock. Death Note first began as a manga series written by Tsugumi Ohba and illustrated by Takeshi Obata. Two live-action movies followed and then the animated series directed by Tetsuro Araki and produced by Madhouse studios. This review is based on the original Japanese TV version of the series, fansubbed in English by the Animanda Group.

The lead protagonist is a remarkably intelligent 17 year old high-school student called Light (or Raito) Yagami, who one day stumbles across a little note-book. He learns that the notebook is of supernatural origin and the instrument of untold power; with it Light can orchestrate the death of any individual he fancies. It is an interesting and provoking concept – ‘power corrupts and absolute power corrupts absolutely’, that underlines the whole show. The 37 episode run depicts the inner corruption of a promising young youth, admired by his contemporaries and a source of immense pride for his family. His boredom lures him into temptation and ultimate power over the life and death of those around him poisons his mind. We witness his rise and then his inevitable fall. That such divine power is not for mortal man, is ultimate lesson. 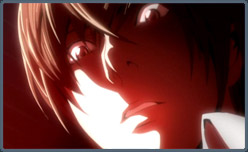 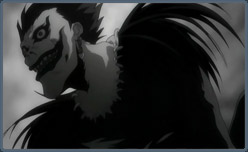 The anime follows the manga with near scene-by-scene precision and hence kept many fans of the original manga who would have been alienated had there been many departures. It also means the anime retains much of the thrust the original creators intended. Death Note is best described as a ‘clever’ tale. The story is gripping and suspenseful, the plot intricate and the twists plenty. It progresses as cleverly and deftly as only the best cat and mouse chase may and despite its length is never tedious, monotonous or boring; yet it manages this despite not being full of action or stunts – indeed it would be fair to say the action in Death Note takes place within the mind of the lead protagonist.
A few plot-holes in the early part of the series cast a minor tarnish on an otherwise splendid affair, splendid at least until episode 26. After this point, I found the story disappointing.

The creators set up as the main engine of their plot, the cat-and-mouse chase of the two lead characters and wove a commendable story around them which served to showcase the equal genius of both men. Then for some inexplicable reason, they proceeded to mow that all down with reckless abandon in the final 10 episodes leaving the viewer in much dismay.

It is for this reason and with much regret that I could not bring myself to award a higher grade.

The two leading characters are Light Yagami and his equal adversary, the ingenius and anonymous detective known only as “L”. Without revealing much of the plot, the two men lock wits with each other, engaging in a long-drawn out and much bloodied match of chess. Towards the end, one of them falls and the other believes his victory certain but although the battle is lost, there is one last card yet to be played and the war is not over. The cast of Death Note is laudable indeed. Both Light and “L” are memorable and unique. Much effort has gone into the creation of their personalities and the results speak of this. They are nothing alike: Light as your typical prep-school prodigy and “L” who is awkward and dishevelled, even downright weird with several pet quirks from the way he sits to how he holds objects and even his compulsive love of ice-cream but under these widely different veneers, each possesses a most powerful mind.

The supporting cast also leaves nothing wanting. The team who work tirelessly with “L” to track down the ubiquitous and elusive “kira”, each character is unique and interesting.

Amane Misa is a young, effervescent teenage model and idol with an intense infatuation with Light Yagami. Her devotion to him is complete and sincere, happily sacrificing half of her life-span for his benefit not once but twice. This devotion is explained in later episodes adding depth to her character. 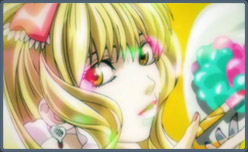 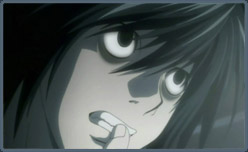 The Death Gods, of which the two who feature most prominently: Ryuk who is attached to Light and Rem who is attached to Misa, are just as fully fleshed out as the others. Ryuk is the more detached, observing the unfolding of events set in motion with amusement and curiosity while Rem, we learn is far more affected and involved with her charge.

One common complaint to be heard is the lack of development in the characters even though the anime encompasses a substantial time-span, especially since the show prides itself on the depth and fullness of its characters. I find this to be a somewhat unfair allegation. Character development is worked into the way the multiple layers of the cast’s personality peal during the course of the show, sometimes surprising us, sometimes being predictable. The characters perhaps do not ‘grow’ as such but we do see Light’s fall into corruption as his conscience erodes. The only characters whom I found incomplete were the few introduced towards the end. Near and Mello seem far too much like rehashes of different aspects of “L”’s personality and Mikami was quite generic.

The cast of characters, unique and memorable are one of the highlights of the show despite the few shortcomings and are worthy of a high award.

The artwork is done in the more serious and realistic vein of the manga style. The colours are vivid and crisp with the tones kept grim to suit the mood of the series, without being gloomy or too dark. Again the show closely adheres to the original. The characters and scenes are very much like how they appeared in the manga except this time in colour. The animation is excellent, the best of what one comes across in anime these days and leaves nothing lacking. Nothing is re-used and the opening and closing sequences are done with an eye for creativity and aesthetics. Although there is nothing particularly groundbreaking in this regard, the production is of the very best quality which speaks of the plenty of funding and resources pooled into this project.

The voice-acting was impressive and convincing, the original Japanese voice-over at least. I cannot comment on the English dub, because I have not watched it. The background music throughout was good and complemented the mood and settings very well. It was one of the most carefully and well-directed soundtracks I have come across in a while. The opening and closing themes, especially the second set which run from episodes 20 – 37 performed by Maximum the Hormone were noteworthy and distinctive, the sort which make for listening even on their own. This is definitely a soundtrack CD worth paying for separately, something not often encountered. 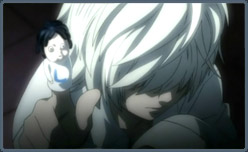 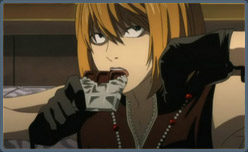 In conclusion, I would recommend Death Note to all anime-fans, new and old alike. It has its shortcomings, especially the storyline related fiasco mentioned earlier which kept it from getting the much coveted Distinction but that should not prevent anyone from foregoing the show. It has much to recommend it, and is highly entertaining with a top-notch production. This is a show with tremendous appeal despite the disappointment of the last ten episodes. Fans might be interested in checking out the three-hour Television special Death Note: Vision From God which is an epilogue from the vantage point of view of Ryuk. It includes new footage and dialogue not featured in the anime.
Overall, it has been rated A.