What do you get when you have an anime that’s based on one of Clamp’s best character art direction and Sunrise’s awesome animation? It’s really just two words that bring about “awesome”, “unique” and “fresh” to the anime industry… “CODE Geass”

Code Geass is the brainchild of two great men; Gorō Taniguchi (Director) and Ichirō Ōkouchi (Writer). Both of whom have worked on another Sunrise series, the acclaimed Planetes. The Character designs are done by the highly popular Manga studio “Clamp”, who are known for their awesome work on Card Captor Sakura, Chobits, X, xxxHolic and Tsubasa Chronichles, among many others. The conversion of the vision into animated format is also done by the same animation studio “Sunrise” that worked on some amazing anime(Gundam Seed, Zega pain and Scryed e.t.c). Calling it one of the best anime of the year is an understatement, it’s most definitely one of the best anime of all time. 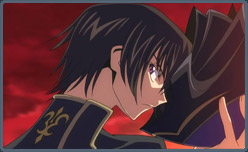 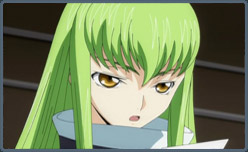 The story is set in the distant future of a conquered Japan. Japanese are striped of their name, diginity and rights and are known as “Elevens” by their conqueror, the Britanian empire. Taking a break from Clamp’s usual dose of “light hearted” and cheery stories, Code Geass is a dark and gritty tale about revenge, oppression of the weak, and conflicting morals. What exactly is Code Geass though? It’s difficult to say. The Anime can be considered a mesh of several genre and unlike many of it’s kind, it meshes each genre very finely and quite effectively.

Code Geass has a bit of a Mecha element to it, but it’s more or less about a guy named Lelouche’, his past and the way he stands up to what’s happening around him. When he accidentally meets a green haired girl named C.C, his life changes and he gains the power of the Geass. With this power, he’s able to issue an order that the inflicted victim will always follow. From here on, the anime turns into a war story and how Lelouch uses his powers to start an uprising against the Britanian Empire. This dark gritty tale, filled with suspense, thrills, action, Mechs, murder and drama is an amazingly fresh and highly addictive experience.

The plot, is one of the most addictive and interesting seen to date. The story starts out in a rather chaotic way, introducing multiple plot points that branch out into their own little stories. While it seems that the anime’s taking too much onto itself, it really does settle each plot point, each little tidbit well, and no part of the plot actually seems deattached or unrelated from the other. It’s all connected, and very well thought out. Code Geass’s amazing plot, is definitely the strength and the true worth of this anime. It’s just something to be experienced.

Of course, what Code Geass really excels at is something that even some of the best anime fail to do right. The “pacing” of the story in Code Geass, is near perfect. There’s no useless episode in Code Geass, and there’s rarely (if ever) any point in the entire 25 episodes that can be considered a “drag” or even just a bit slow. No… each episode of Code Geass is nice and chunky with story and events. Each episode superbly introduces something and leads onto to the next, making this a roller coaster ride that just gets better and better and better as it moves on, all the way till the end.

While the ending is indeed, a cliffhanger, it’s not one that’s going to remain unanswered. At the end of the last episode, it has already been announced that a second season is well on it’s way. With that said, Code Geass’s first season does an amazing job of setting up a lot of plot points, covering up most of the minor details and getting ready for the next step in the story. 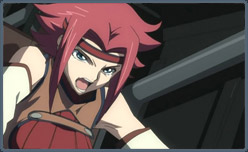 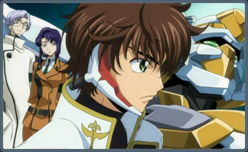 Complimenting the plot, is a cast of amazing and very well thought out characters. Each character has a very deep and well made past, and their personalities and ideals are based on what they’ve gone through. Adding to that fact, is the amazingly well done character development that each character goes through.

Each event further changes and evolves the characters, and makes them realize what they want and what they should do. This evolution doesn’t stray beyond the limits of their core personalities though, and the result is an anime that is full of characters that will make you clench your fist in frustration or jump up and down in cheer for their amazing reactions.

The main character himself, Lelouche is just so interesting and cool that he alone, would give the anime greatness. He’s one of those few characters that have charisma, can talk well, are mysterious and give out a somewhat evil aura while still treading on a path that seems to be right. Added to that is the classic goody two shoes (and childhood friend) Suzaku, who believes in following the rules and not going against the government. While it’s not a definite which characters are likeable, and which are just darn hateful (for how well they play their negative roles) to a person, it is certain that NONE of the characters in the anime are worthless or unneeded.

It’s been a good deal of a while since Sunrise did it’s last block buster project, and the animation in Code Geass is definitely one of the best seen so far in anime. Crisp, clear and smooth, the animation makes everything flow so well that it’s a sight to behold. It’s definitely one of the most well animated anime to date, from it’s mech fights to it’s less action packed (but still intense) character interaction moments. While the animation isn’t a ground breaking revolution like Gankatsu, it’s definitely one of the most refined and well crafted forms of the classic animation style to date. Sunrise has really outdone itself this time, with almost no animation recycling at all and that really makes one see the care and hardwork put into each and every episode of the series.

On the art side, most of Code Geass is amazingly well done. The character designs, the mechs, and especially the varied art done in the backgrounds for each of the locales are just jaw dropping. There’s still the fact of some of the characters being a bit “longer and thinner” than what can be considered normal, but that really is “Clamp’s” style of art. It may irk one a bit at first, but it’s really a small “oddity” in an otherwise amazing looking anime. Code Geass gets top notch marks for it’s amazingly well done artwork, character designs and locales. 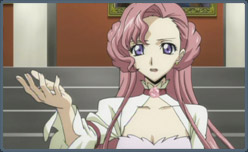 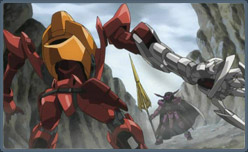 Soundwise, Code Geass hits a high note again. The voice acting in particular, is VERY well done. There’s no dialogue that doesn’t have some a feeling of life and realism in it. Each dialogue is delivered expertly, and even to non-japanese folk (mostly all of us), it really is visible that extra care was put into this element of the sound. The OST itself is pretty amazing except for a disappointing second Opening theme which fails to live up to the high standards set by the first one. All in all though, the sound effects, music and voice acting are all top notch, and there’s definitely nothing to be nit picky about even.

Overall, Code Geass is the cream of the anime crop. It’s an expert example of what an anime should be. It’s got an amazing story that’s a well thought out and expertly paced. It’s got some amazingly deep characters, and top notch animation, art and sound. Is there any thing that’s not to like about Code Geass? Sure, if you want to be picky, you’ll find SOMETHING, in some small part of the anime that can be called bad, but make no mistake… If you’ve missed out on Code Geass, you’ve missed out on “THE” anime experience of the year. Amazing stuff, and makes us all the more hyped to see just what Season 2 will have in store for us. Definite A+