It is feudal Japan in the 15th century. The Shogun Ieyasu Tokugawa must choose his successor from among two grandsons, bitterly divided by a feud. When all attempts at diplomacy fail, he summons Hattori Hanzo and the heads of Kouga and Iga ninja clans. The truce between the families is dissolved and he pits them against each other in a battle to the death to determine the successor to the shogunate. Armed with ninja scrolls bearing the names of the ten best warriors of each faction, a vicious struggle for supremacy between the rival clans begins, complicated by the tender (read annoying) but ill-fated love affair of Gennosuke Kouga and Oboro Iga. Basilisk is a Romeo & Juliet story set in the harshly beautiful and tragically romantic backdrop of the Ninja – intrigue, intense rivalry and the ever-present threat of a violent end. 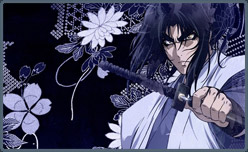 The showdown unfolds in stunning colour and gorgeous artwork over the next 24 episodes, as the clans hack down each other one by one, moving steadily towards an inevitable and bitter end. This review is based on the original Japanese version fan-subbed by a number of different groups.

Each episode begins with a grim battle scene and narration, the prologue culminating with the tagline “To the one I love, prepare for death”. This is the basic synopsis, two ninja clans separated by hatred and two pairs of star-crossed lovers caught in the midst. The series begins with a history of the factions. For four centuries, the clans have warred with one another, until finally a fragile peace is attained under the auspices of the first Hattori Hanzo. Not much later, intrigue and betrayal blight the truce and the love affair of Ogen of Iga and Danjo of Kouga. When peace comes again, it is too late for them. Several years later, the clans are once again bound by a truce. To cement the ties, the heirs of the two families are betrothed and Gennosuke Kouga and Oboro Iga grow to love each other only to be torn cruelly asunder. History repeats itself.The story runs predictably toward an inevitable conclusion. There is one significant twist and in the last episode, the story manages to draw a tear or two from the more sentimental viewers. A catharsis faithful to the tradition of the genre. The story is quite simple and in the vein of classical theatrical romance.

The execution however suffers from certain failings which pull down the whole series. The principle lead character Oboro of the Iga clan is irritating to say the least. Pathetic, miserable and so diffident as to make the viewer sick. To make matters worse, GONZO allotted her far too much screen-time which would have better served some of the other characters – Muroga Hyoma for instance. Additionally, too many of the really interesting characters were killed off prematurely, which was not only a shame in its own right but meant the series perforce had to focus on Oboro who needless to say, survived to the very end (>_<). Secondly, since the basic premise never changes, i.e. ninja from both clans being eliminated in more and more ghastly ways, the show tends to get monotonous especially with the endlessly sulking and whimpering Oboro. Subsequently, having killed off some of the best characters early on, the middle portion suffers from monotone and filler-episodes, a recap episode and a down-memory-lane episode (which was actually good in terms of character development and not such a let down).

The story cannot deserve more than a C because there simply isn’t enough to it. GONZO try to bring in some political and historical intrigue, they try to add in some colourful back stories, but the main plot is too feeble and out-moded. Shakespeare is so 16th century, let’s have something fresh now. 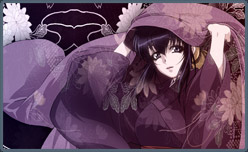 The characters in Basilisk are well written and involving. They manage to evoke sympathy in most cases. The writers have managed to create multi-dimensional personalities, passionate and tender one minute and vicious the other. Oboro is one painful exception. She is one of those characters that inspire the viewer to look forward to evil befalling them. One is left hoping someone would kill her quickly and end her suffering as well as one’s own.

There is no ‘good’ clan and no ‘evil’ clan, there are no evil characters, just two families determined to uphold family name and honour and avenge the deaths of their loved ones. In both factions, there are likeable elements and characters which are too ugly, both inside and out to appeal much. On the flip-side, since the cast is so extensive, not all the deserving characters get enough screen-time to be enjoyed to the fullest. The remedy for this, far from being more episodes, would simply have been better time allocation. At times, some characters resemble other characters’ appearance so much; it becomes hard to tell them apart. Yashamaru and Saemon took a bit of time to differentiate between as did Tenzen and Hyoma. However, since it is the characters which drive Basilisk forward and make it memorable, they land themselves a B+.

The crowning glory of Basilisk is its stunning visuals. The artwork is gorgeous, and the animation fluid. Some of the backgrounds have been done to such perfection and with such an eye for aesthetics that they look like watercolour paintings. The characters look great, apart from a few freaks which are quite appalling, for instance Ieyasu Tokugawa’s chin bears a very disturbing resemblance to testicles. Nenki of the Iga is also quite repulsive but I suppose that is part of his character profile and one cannot argue that he should have looked like prince charming. The colour is stunning. I watched the whole series in real media encodes, and despite the poor quality of the video, the colours were vibrant and luxurious. One of the best palettes in recent years. Art and Animation are definitely the high-point of this show and get an A. 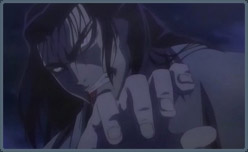 The sound track is not bad. The Opening Theme is a pop-rock angsty number, which may not win any awards or be long remembered but is good enough for the purpose. The same goes for the Closing Theme. Background music is adequate, and successfully adds to the ambience. In all cases, the music is good enough, but does not stand out and hence deserves a C.

This being primarily a ninja story, comparisons with Ninja Scroll and Naruto are inevitable. The Ninja Scroll movie was more refined and sophisticated. The ninja techniques believable, which in Basilisk are not. Naruto is lighter, more humorous fare, aimed at a slightly younger age group; Basilisk is for a mature 16+ audience. In some places, Basilisk is reminiscent of the Rurouni Kenshin OVA, if you enjoyed Reminiscence, you may want to watch this series.

In conclusion, Basilisk is a good anime, but it lacks that extra polish and depth to rated any better than a B.
~Reviewed By Lithium Flower