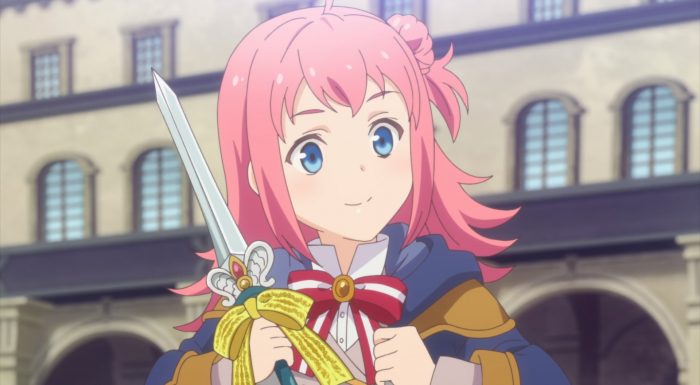 This episode continues to hammer home the stakes involved in all this. Obviously, they can’t just let something terrible happen right away. But layers are being added that should keep things from being too easy for Endo and Kobayashi. I’m still glad they are trying to build up that tension with the characters fully grasping that they have no way to try again. It looks to be a one-shot deal here. Either they get it right and create the happy ending they are seeking, or they won’t. But they’ll have to live with the consequences either way. 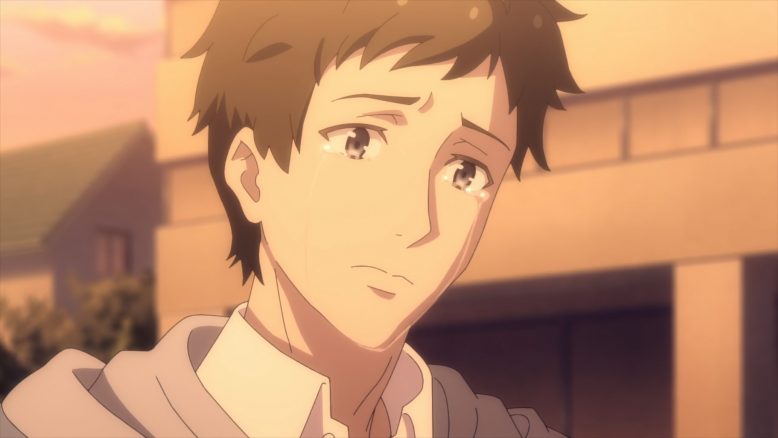 Endo’s situation did end up being what I thought it might be. Poor guy just was ripped away from something he loved and had dedicated himself to. It wasn’t anyone’s fault, but his body just gave out on him. But I’m sure that would just leave him with even more regrets. In a way the injury determined how far he could go in that sport. But I’m sure he wanted to see just what he could do if he had the freedom to play to the limits of his ability instead of the limits of his health.

No wonder he fell for Kobayashi though. She saved him. Not only from an uncomfortable situation, but in terms of giving him a reason to keep moving forward. It wasn’t just a distraction from his pain. She gave him the comfort of feeling like his efforts weren’t wasted. He can’t play anymore, but his love for baseball and his efforts still means something. They can still be used as experience towards something else. He doesn’t just have to leave baseball in the past and let it go. Before that point he’d lost hope and felt utterly empty. Who wouldn’t fall for someone that gave them a reason to believe in themselves again? 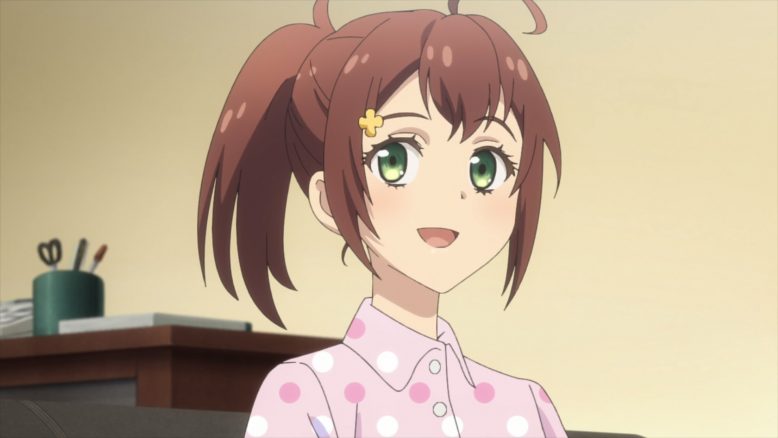 Kobayashi is just a great girl

So, I’m as excited to see how things progress for Endo and Kobayashi as any other pair in the show. And I think it was important for Kobayashi to really take in how much Endo appreciated her. That her words and heart saved him from his lowest point. And he’s channeling that towards their efforts to save those characters. It gives him the chance to give to someone the salvation she gave to him. I’m not sure how she really feels about Endo at this specific moment in time. But I do think moments like that will either help her to fall for him or to just appreciate the feelings that probably are already inside of her.

On a side note, what was wrong with that class? At least some of those people must be aware that Endo left the baseball team due to injury. Even if they don’t know, they should be able to suspect. His last game he leaves due to obvious injury and suddenly he’s not on the team anymore. Logic should be there that he probably shouldn’t even be playing softball. But even beyond that, it’s just plain insensitive. I know people can be stupid, but geeze. Thank goodness Kobayashi was in that class. The only person there with a soul. 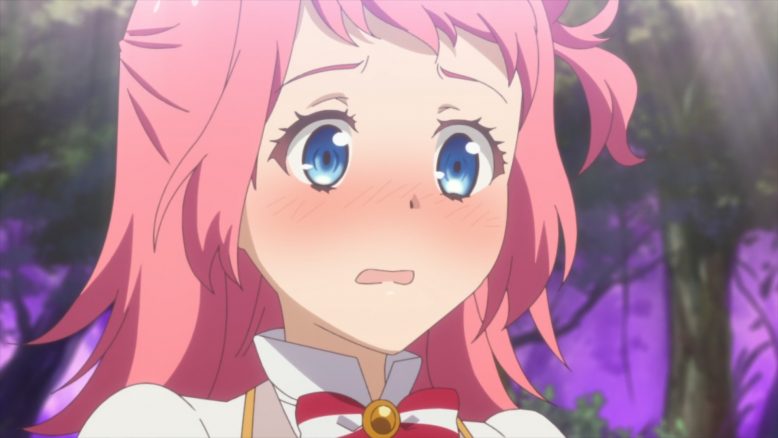 She just can’t handle this guy!

Fiene’s situation is interesting. I think she’s going to be even more key than I’d normally expect in this story. She is the game’s protagonist so in a sense that shouldn’t be a shock. But right now, the focus is on saving Lieselotte. I don’t think Fiene is getting the attention from Endo and Kobayashi as she probably should. Her whole situation is abnormal. Her stats are maxed out like she’s going through a New Game + run instead of this being a fresh game. And she clearly had a memory of Baldur getting killed flash in her mind. That’s probably a scene of him getting killed in a bad route. What else might end up happening with her and how might that impact how the story is going to unfold? I feel like Endo and Kobayashi might miss some important details focusing only on Lieselotte.

I also wonder what kind of impact will all this have on her mental state? If she was a less overpowered protagonist, she might view events and react differently. Her words were accurate, but a bit horrifying. She was honestly talking about being able to survive even if her limbs were cut off or her gut cut open. How does a person honestly move ahead with that kind of awareness? How many other visions is she going to see of Baldur dying to protect her and might she push him away because of that? She might have her own troubles in putting her trust in others. It’s almost the superhero thing of her being nearly invincible but the people she cares about aren’t. 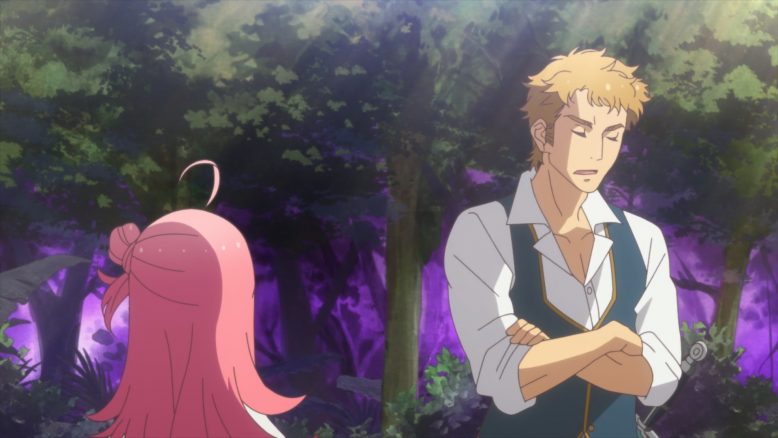 Just musing over how cute his love interest is

So far things look ok for Fiene though. Bal is a surprisingly smooth operator. He’s not intentional with it, but that just makes his words even more effective. He’s not going to deny her strength since that’s obvious. But saying that he seems even weaker against her than he is against normal enemies is nice. Even more so since he can slip in calling her lovely at the same time XD. It’s great since he isn’t intentionally flirting or trying to hit on her. He just objectively considers her a beauty and one that is special to him. Bal’s honest view is that no one could seriously wield their sword against someone as cute as she is. He could probably handle fighting other lovely girls, but when it comes to Fiene he’s especially incapable of doing his best.

I was a bit worried about these two for a while. It felt like Bal getting this divine mission to protect Fiene would just really frustrate her. And it’d be hard to blame her since she’s just insanely powerful and hardly needs protection. But thankfully things are looking pretty good. Even managing to start to turn Fiene into a bit of a tsundere. At least she had to run away like how Lieselotte had to in the previous episode. 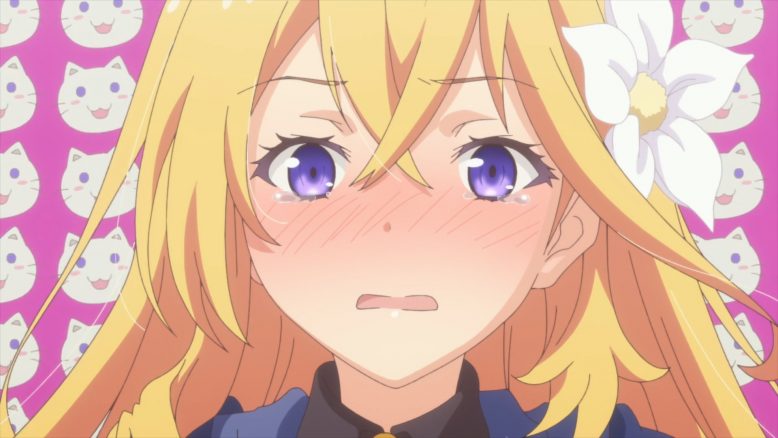 It’s funny how little I’ve mentioned Lieselotte, but in a sense she’s just a steady cute presence in the show. It is a bit unnerving when Sieg isn’t around since Endo and Kobayashi are kind of helpless. They can’t give anyone else advice. So, all they can do is hope that Fiene has seen enough of Liese to realize how much of a “tsun de rais” Lieselotte is. I think it is fine though. And in that sense, I look forward to seeing how their friendship continues to grow. Even if it sometimes risks people seeing them as a possible yuri ship.

The only issue is that Lieselotte isn’t so easily saved. It’s a shame since at this point there’s been nothing to make her think her bond with Sieg isn’t strong. But she’s just so awkward and lacking confidence in herself. I’m sure there is an influence from that Witch that is messing with her mental state, but I do wonder if most of it isn’t just a legitimate lack of confidence. The biggest worry I suppose is something happening that could legitimately give her reason to worry. But for now, there is little to hold her back. 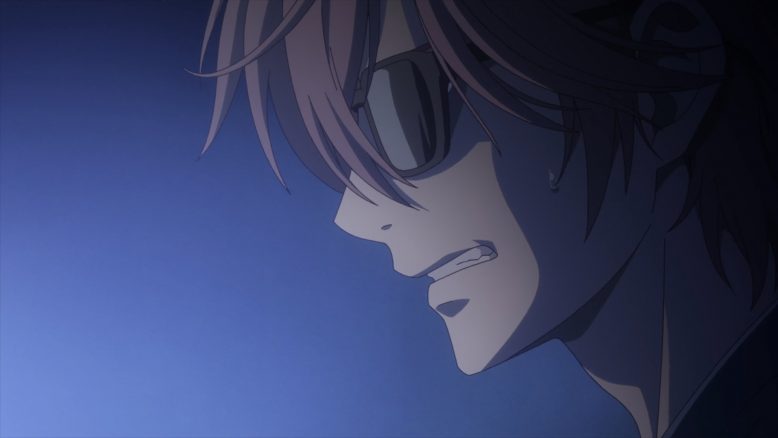 He’s having a bad day

This was a great episode. I love how each side of the story got a bit of focus and was allowed to be further developed. They also hammered home how strange this whole situation is. Kobayashi can’t play the game by herself, can’t do anything with the saves, and clearly something is up with Fiene’s stats. And there even is that actor who is bound to be a major player in all this. He seems particularly frustrated and can’t seem to access the game. Has somehow his access been transferred to Endo and Kobayashi? If so…how and why? Or is it just that he can’t access it while they are playing, but he can when they aren’t playing? Curious to see what impact this guy has on these events. What is he hoping for with this game?