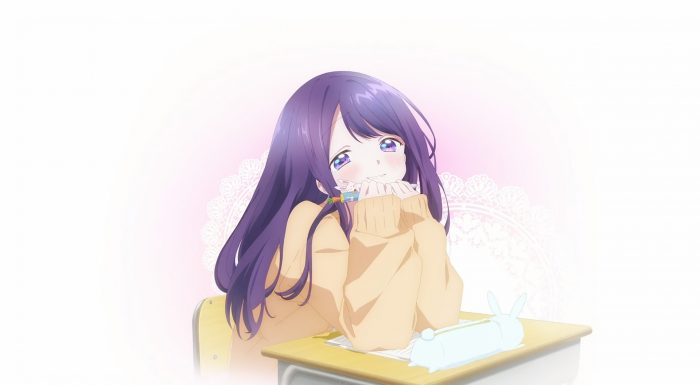 Absolutely a contender for cutest first episode of the season right here. I expected this to be good going in. But it ended up being even cuter and more fun than even that. The focus stayed nicely on Shiraishi and Kubo the whole way through and didn’t drag in the slightest. Obviously, the cast is going to expand (and probably focus even more on Kubo’s friends), but these two can carry the show just on their own if needed. There’s just a lot of cute energy when it comes to these two. I’d say it does still fall into the whole “teasing girl” territory of shows like Takagi-san, Nagatoro-san, etc. But it’s almost purely cute. Even when Kubo is teasing or pushing Shiraishi to do some silly stuff, it never feels like he’s going to have a bad time here. 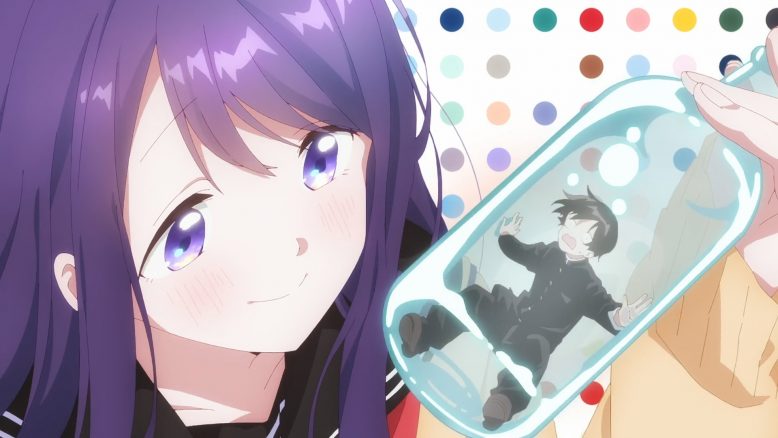 Not enough ways to express how cute Kubo is

A lot of the praise to this episode goes straight to Kubo herself. I give huge credit to Kana Hanazawa for delivering a great performance as Kubo. This woman is doing great work this season between Kubo in this show and Kobayashi in TsunLise. She even sang the OP wonderfully. A classic voice actor who just brings out the best of Kubo here. She manages to bring out the “girl in love” element in Kubo and has a voice that can tease without it being annoying. No matter how much fun Kubo has with Shiraishi in this episode it never feels like too much is being done or that he’s having a bad time. Although I suppose getting caught standing on his chair might have been a bit rough…

The whole concept just is loaded with cuteness. Shiraishi is invisible to most people and struggles to get on the stage of his own life. But the girl that likes him can always find him without any effort. Her eyes can’t help but track him down which almost leaves her cutely perplexed at how others can’t notice him. And honestly Kubo is high levels of cute. Her pouting face is wonderful, and I respect Shiraishi’s resolve for not immediately giving in every time she pouts about something. She’s one of those characters where every expression lands perfectly. Her smiles, smirks, pouts, etc, are just a treat to behold. When she’s looking happy it just leaves me smiling as well. 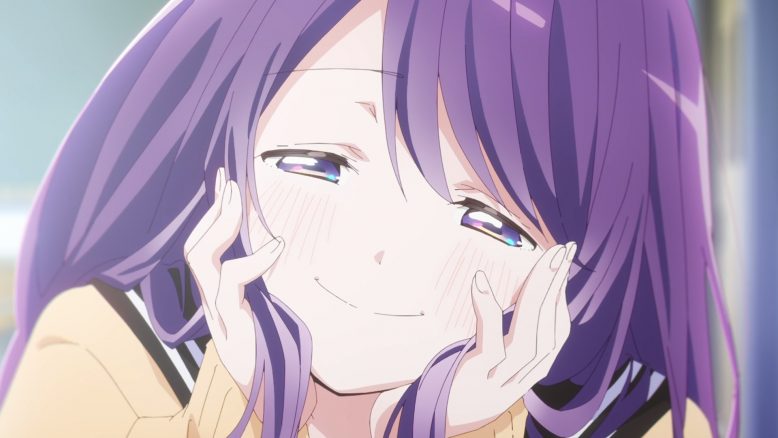 I do wonder what sparked her interest

The big questions are when and why she ended up starting to fall for him. Did she notice him at some specific moment, and something he did left an impact? I don’t think it’s because she thinks it is special that she can notice him. It seems almost confusing to her that no one notices him when it’s so natural to her. It’s kind of nice to just jump into things with the girl clearly already interested. We don’t have to just start with their first meeting and build up from there. Instead, we’re kind of just jumping right into the middle of it. Kubo and Shiraishi aren’t that close yet. But they clearly have been doing this back and forth for a while. I do hope we get a flashback though of their first interactions. 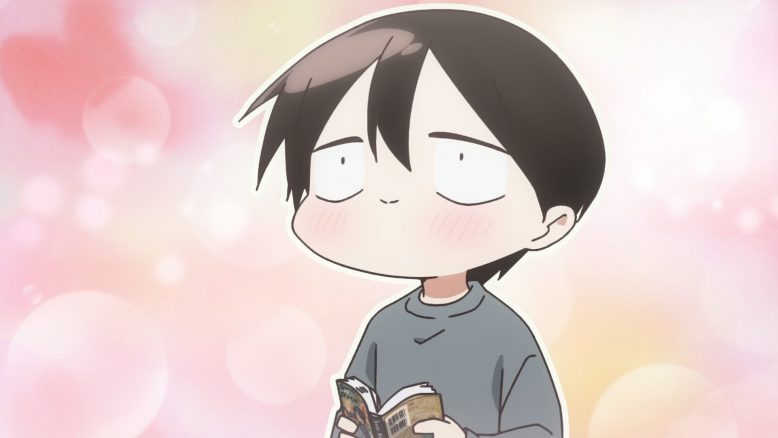 The invisible man is a good guy

It’s easy in a show like this to underrate the male protagonist. And it would be incredibly ironic to just forget to talk about Shiraishi. But he’s honestly a nice main character in his own right. The guy isn’t outgoing or extremely confident. Yet he’s not some reclusive loner either. It’s more that his circumstances dictate his actions. People don’t notice him. It’s almost on a supernatural level. Cashiers literally think no one is there until he gets their attention, and they freak out a bit. In a case like that of course he’s not going to have a lot of friends and would just gravitate to solo activities. Not that there is anything wrong with that, but it isn’t as if he’s actively rejected group activities. Just a lot of work for a guy that must tell the teacher each day that he really was in class.

Shiraishi at most might be a bit oblivious. He clearly hasn’t picked up on any legitimate interest from Kubo. That’s despite the girl doing flirty things like sitting in his lap. He also couldn’t figure out that she was upset about him not responding to her greeting that morning. In that case though he really did think she was just talking to someone behind him. Even if Kubo always spots him, it probably is easy to always presume that people aren’t talking to him. But he does try to avoid instantly going along with things he’s not quite onboard with like standing on his chair. He just gave into some light blackmail XD. Honestly, Shiraishi is just a nice guy. 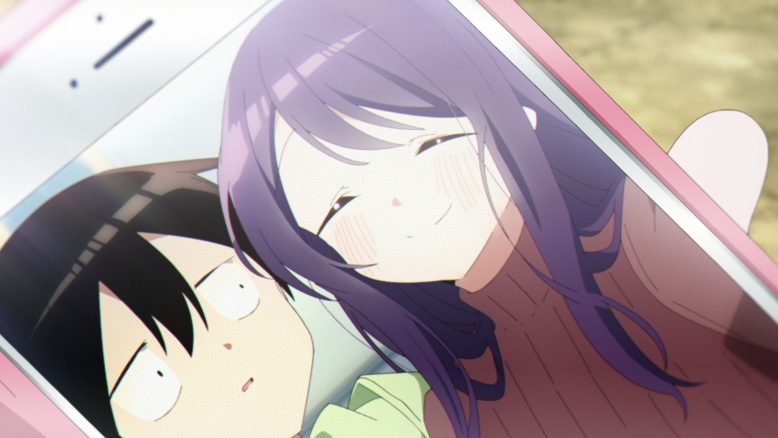 She’s already got a picture of them together!

The first episode was easily broken down into a few skits. There was the incident with standing in class, the confrontation over not greeting Kubo, answering questions in class, and meeting outside of class. In a sense a lot happened though. Kubo doesn’t mess around in terms of chasing things she wants. The girl got to have some fun with Shiraishi, let him answer a question in class, got help herself on something she didn’t know, sat in his lap, and even got his Pine (Line) information so she can text him whenever she wants! She is a confident girl on a mission. At the rate she’s going they could be planning the marriage by the end of the season! There will obviously be more characters added as we go along. But this was a strong start for just the main pair. 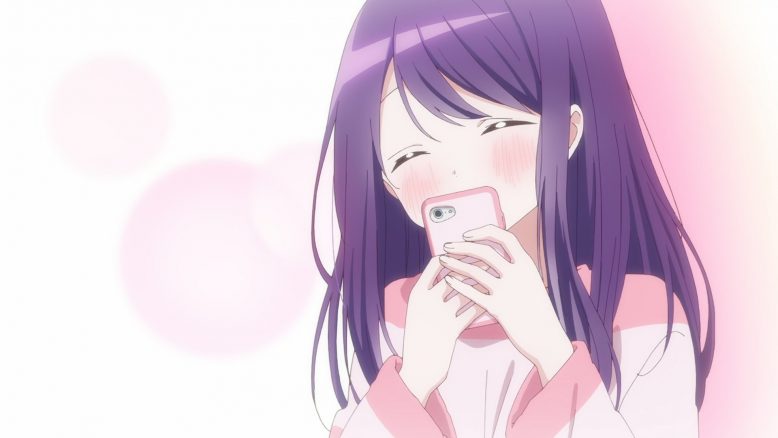 The more Kubo the better!

Honestly, I had a lot of fun here. I only came across the manga last year when it was added to Shonen Jumps mobile app. Even then they haven’t been able to upload all the chapters available so there are huge gaps where I have no idea what has gone on. So, I knew going in that I would likely enjoy the show. But this was even more fun than I had thought it would be. A lot of the praise goes to the voice actors, but also to the staff. The visuals can be solid most of the time and then just elevate at the right moments. Most of the time it’s there to make Kubo even more enchanting. There’s a good chance I’ll have enough fun to stick with this show. But it’s hard to say with the season just getting underway.