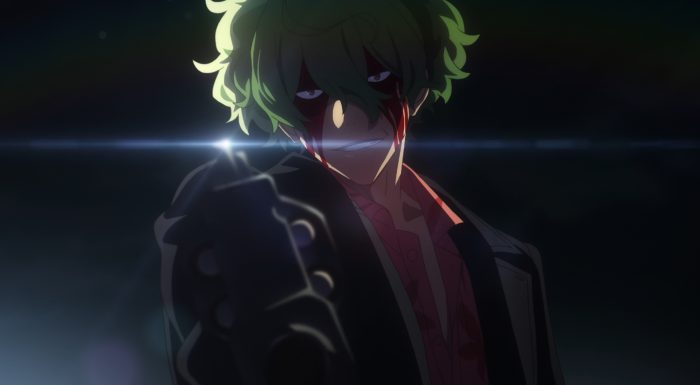 This show just keeps finding ways to keep my focus glued to the screen. Things got very intense near the end of this one. They did need to create some real drama and put Chisato’s life on the line. Even if there’s no chance for Chisato to die before the finale, it still did a good job creating tension. With her getting knocked around while blinded from blood in her eyes…that was definitely accomplished. They built up the danger with just establishing Majima’s looming presence and then unleashing him. And he was even more dangerous than I expected him to be. Of course, they did show him taking down several Lycoris before this point so maybe that should have already been a given. But actually, seeing him getting the advantage over Chisato was something else. 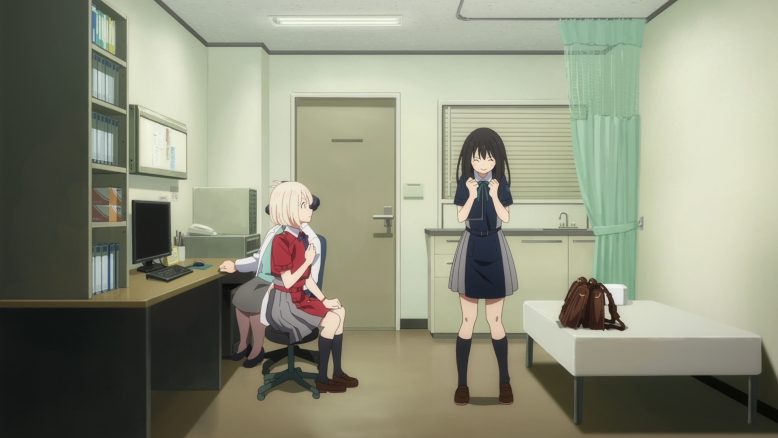 I know a lot happened in this episode, but I want to focus on the ending. Takina’s squeals of victory were some of the purest celebrations I’ve seen in a while. I just loved it. She jumped right in on taking the advice she was given, scored a lucky win, and she just let her joy come out. Beyond the first squeak it wasn’t very loud, but it was incredibly expressive. Her little jump for joy and tiny dance just captured how she was so happy to have gotten that win. Takina isn’t the only person in the world that doesn’t take losing well. But after losing that many times it makes sense that she was hungry for a win. The losing had been eating at her and I loved seeing her enjoy herself that much.

Poor Takina had been getting destroyed in those games though. It is fair to argue that she should have realized that Chisato’s incredible vision was giving her an advantage. But it is understandable I think that she didn’t realize to what extent it would come into play for rock/paper/scissors. She clued in pretty quick when it was explained to her. And it makes sense that during that ‘set’ moment Chisato could read if Takina was going to stay rock or not. Once that happened Chisato 100% could not lose. Maybe she’d get a draw now and then. But she’d never lose. And it’s so cheap that Chisato used her skills to make Takina into basically her live-in maid! After that she totally deserved Takina celebrating all over the place in front of her! 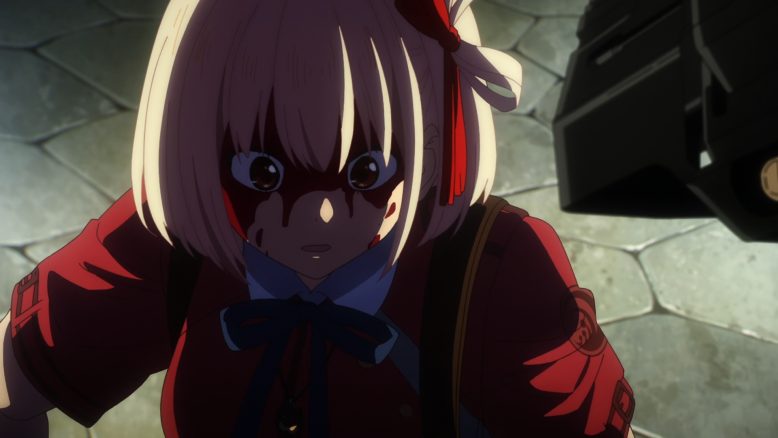 This was a close one

Majima definitely established himself as a dangerous threat. And maybe he’s one that’s a bit invulnerable since he survived an explosion with only minor injuries! That goes both ways of course, since somehow Chisato handled getting hit by a car surprisingly well. While Robota drew up the strategy to some degree, it is still Majima and his crew that made it happen. And he was plenty capable of rolling with the punches, even against a top tier Lycoris like Chisato. At the very least it was very convincing that this guy is a threat to even Chisato.

The blood in the face move was definitely effective. I guess even Chisato can’t dodge that! Even with her elite vision, there are some things that are harder to predict. Catching her off-guard is key and Majima managed that here. And he really did have her in a bad spot since without the ability to see she was helpless. If not for the guy being a bit of a talker, she’d have been killed before anyone could try to save her. 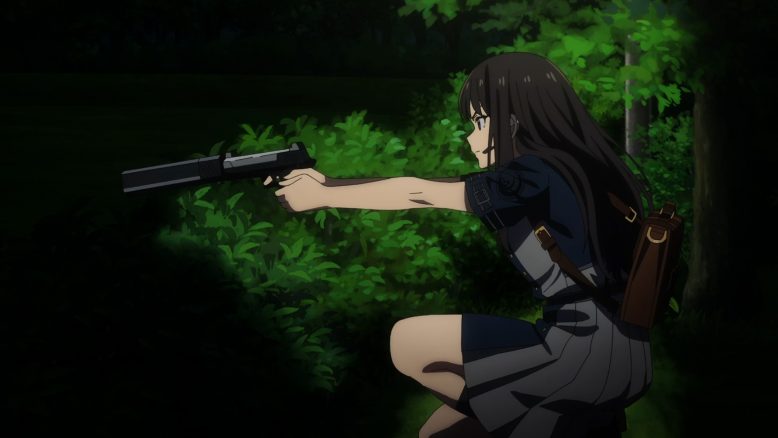 Huge props for Takina for the beautiful rescue! Everyone did of course play a role here. But I loved seeing Takina go out there and just save her girl. She started right off with shooting the gun right out of Majima’s hand and then systematically took down several of his men in quick order. And even better is that she was clearly embracing the direction that Chisato wanted to walk down. She wasn’t going to fight her on this and insist on shooting to kill. Chisato noted that she was skilled enough to shoot to injure and avoid killing even with regular bullets. It was simply enjoyable seeing Takina unleash hell in a way that Chisato would be proud of. 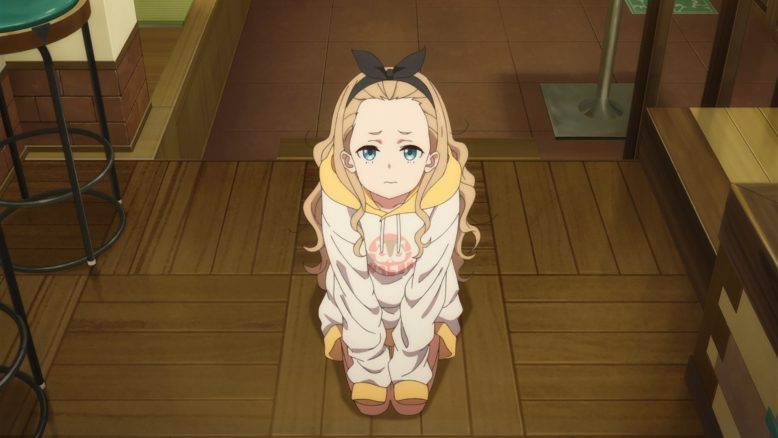 Maybe she made some mistakes

I liked the obvious contrast between Kurumi and Robota. Both of them were pretty active in this episode and both were doing their best to support their sides in this conflict near the end. It’s funny that they were both left on their knees and feeling like they were in trouble. And yet both effectively get forgiveness and are allowed to carry forward. It’s just that with Kurumi it feels a bit more heartwarming having Takina not hold a grudge against her. While with Robota…I’m confident this guy is going to get killed sooner or later. He is dancing on a knife’s edge the entire episode. His skills don’t match his talk so he can’t crack the DA and get their location. But he also struggles to get Majima to bite on taking on Chisato too. It’s a miracle he’s even alive by the end of this episode.

While Kurumi has an equally interesting situation. It does finally come out that she is the one that cracked the DA. That action contributing to Takina losing her position there and also just helped set events into motion. She was of course working for Shinji and just doing a job. She had no idea what would happen and she definitely didn’t want those guns getting into circulation. But she definitely played a role in things. I’m as proud of Takina as Chisato is though. She didn’t hold a grudge against Kurumi and just moved on. Takina made her decisions and I don’t feel she regrets saving a comrade’s life. And maybe she is accepting all of this as a net positive since she got to meet Chisato. Still, I can’t wait for Robota to find out Kurumi is alive and get trolled by her. 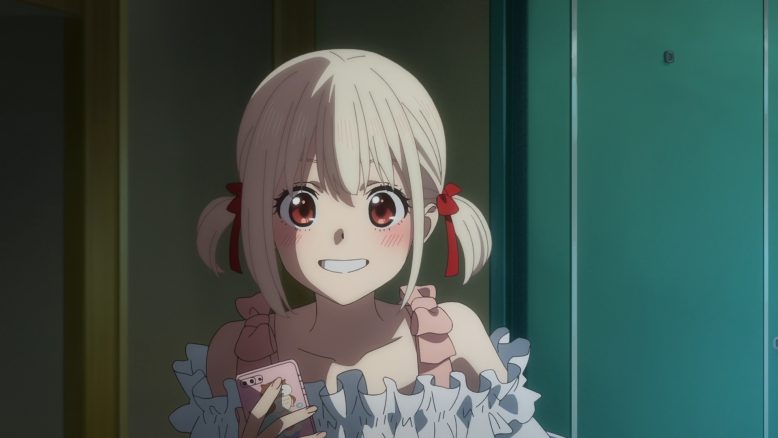 Chisato just happy to have a roommate

We’re set up for things to get even crazier in the second half of this show. Majima is completely locked in on Chisato as much as Shinji is at this stage. Not great for her having these guys way too interested in her. But that’s how it goes. The pressure is going to ramp up and it will be interesting to see how the main cast handles it. The key element will be Takina. She’s not really in the cross-hairs of either of these guys right now. So, she can basically be a free element that can support Chisato in various ways. The two hackers will undoubtedly clash in some way too.

But I am curious to see how this show plays out. Will Chisato make it out alive? I kind of hope so since at this stage breaking up the partnership, she has going with Takina would be tragic. But there’s no way to know besides just waiting and seeing.