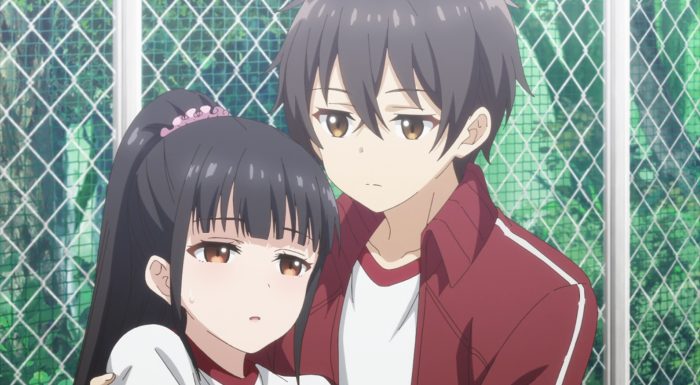 This show remains good fun and the supporting cast really added to an enjoyable second episode. The dynamic between the leads is good. I can’t see a future where they don’t actually end up getting back together. There is plenty of attraction remaining between them. Whatever their piled-up issues were, they are the only thing really keeping them apart at this point. And even in that I can’t say they are doing a good job of it. It’s no wonder things almost got out of hand in episode one. They aren’t remotely over each other and that is only getting harder to ignore the longer they are stuck together. Going to be hard to keep their former relationship a secret as time goes on. And I expect after a certain point they are going to want to confide in their friends anyways. 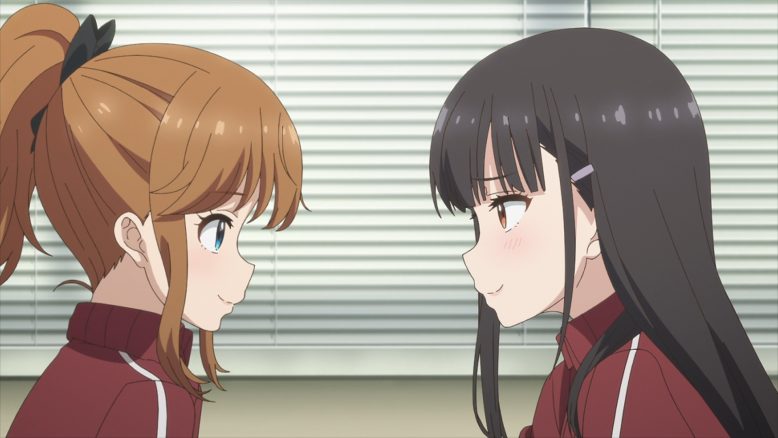 Well, I suspect that Yume will want to confide in Minami sooner than Mizuto will with Kawanami. It was actually nice to see Yume’s friendship grow with that girl. It definitely feels as if she didn’t have a ton of friends in the past. That is probably reflected by her happily going to a school unrelated to the one she graduated from. So having an upbeat and energetic friend is probably a big win for her. Even if she was frustrated at how athletically gifted Minami is, that was evened out with Minami having her points of envy as well. And they do have good banter between them so I can see them getting along well. And if Yume is really shaken up by things with Mizuto…it will be nice to have someone that she can talk to.

It may not even matter that they are trying to keep things secret anyways. Minami is freaking perceptive. Or at least she’s got the talent to make it appear like she’s constantly onto things. Everything Mizuto and Yume say feels like it is being broken down. I think Mizuto especially felt that pressure and realized pretty fast how important it will be to stay on guard with her. She did note a lot of things. Absolutely took note of Mizuto being there to watch out for Yume collapsing from overworking, how they interacted when Yume was sick, Mizuto’s previous romantic experience, and how he corrected her about them being stepsiblings. I can’t wait to see how she reacts to other things that happen throughout the show. 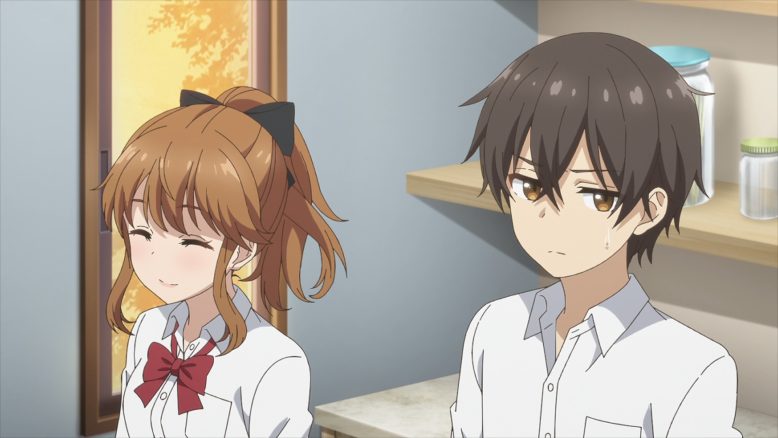 Better watch out for this girl

It makes sense for all those things to catch Minami’s attention. The last thing she jumped on of course being a big thing. If they were simply moving to accept each other as siblings there’d be no need to correct Minami and call their relationship one of stepsiblings. Being actual siblings’ kind of cuts off romantic implications while the latter does leave the door open just a little bit. Of course, it doesn’t mean their relationship would have to get romantic. I’m not surprised that she has her eyes on them. Since they claim to have been strangers before this, there is plenty of potential for interesting interactions. And from Minami’s perspective it is interesting to see how close they are despite that. I can’t imagine she’ll figure out the truth all on her own, but you never know. 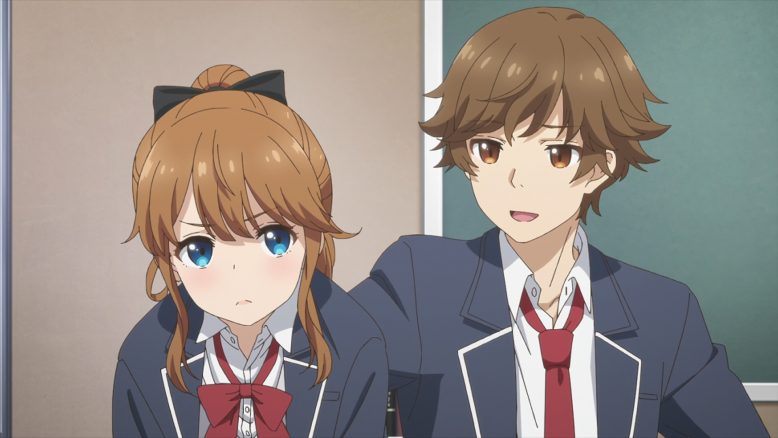 Not sure what to make of this guy yet…

There isn’t as much to say about Kawanami at this point. His friendship with Mizuto took a backseat to Yume and Minami. And you can honestly say Yume was the point of view character for most of the episode. I’m not sure what to make of this guy yet. Is he getting closer to Mizuto because he can tell that there is something going on between Mizuto and Yume? It doesn’t seem like he’s in it to go after Yume. It could be that he finds Mizuto’s abrasive personality amusing. But his claim of basically enjoying observing romance does make me think he’s got suspicions about our main characters. It is hard to say though since we just didn’t get that much of him. 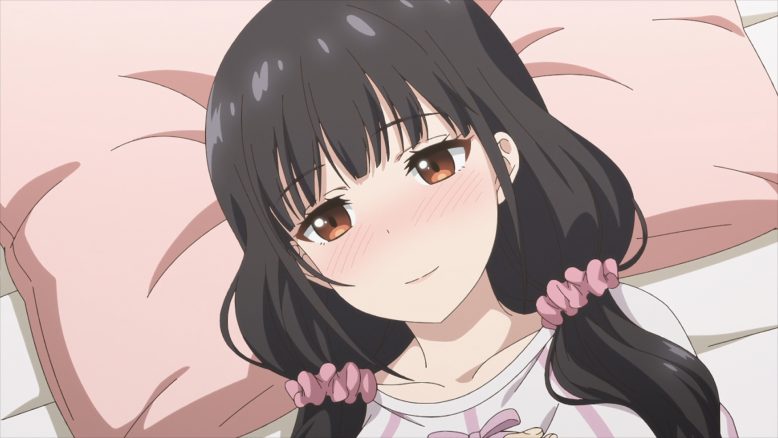 I really wonder what issues piled up to break these two up. They seemed to be pretty happy for a while in their past relationship. And it’s clear that there is still attraction between them now. They are keeping a distance because of their breakup and being stepsiblings now. But it’s really just a matter of time before they get closer. Of course, whether or not they can actually tackle the issues existing between them will determine whether they get any closer than where they are right now. It doesn’t sound like there was one big issue, but there had to be some substantial ones that set them in different directions.

The signs are plentiful in this show about how they both feel. Mizuto knew that Yume was over doing it and was ready to catch her when she collapsed. Even if he passed her off after, he only did so after making sure she’d be looked after. His reaction to the ‘hand holding’ was pretty apparent too. At the very least he seemed reminded of the feelings he still has for her. And that she really turned to him when sick (and even when not so sick) shows how she feels too. It’s not enough for either to willingly confront their own feelings, but it is something. 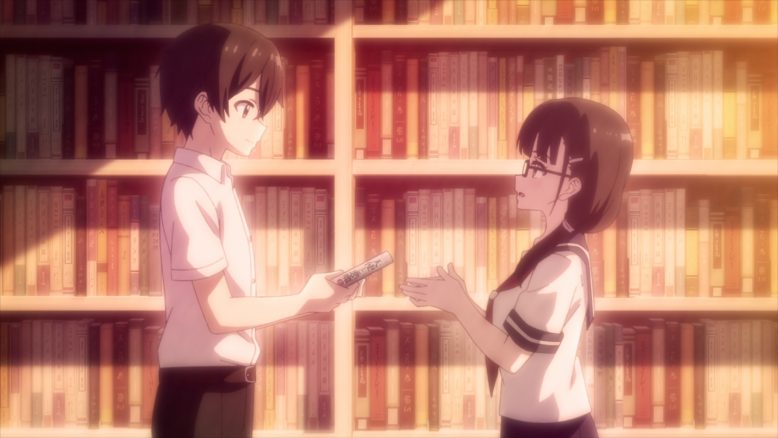 At one point they were all smiles

This is just a show that I’m really enjoying. The relationship is fun, the supporting cast is good so far, and there is plenty for me to dive into here. If they were just pleasantly enjoyable then I wouldn’t be able to say much about it. But thankfully it is more than that. We’ll see if I keep up with this show past this point. But if nothing else it has been a pretty fun first couple of episodes.