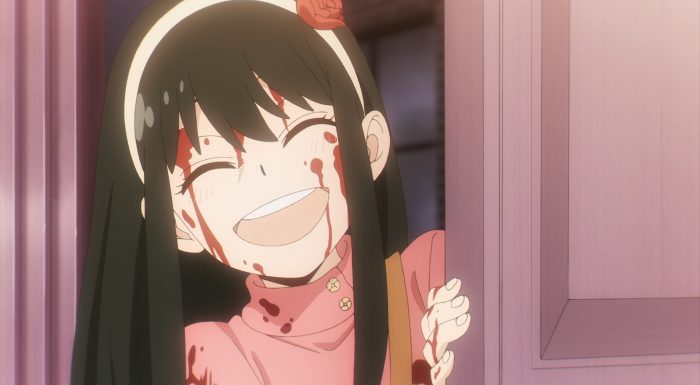 There’s no denying how successful an episode is that ends with me going “wait it’s over already!?” I was so drawn into the showdown between Yuri, Yor, and Loid that I was honestly surprised when the ED started up. Maybe it was in part because Yuri only arrived at the Forger home at the mid-point of the episode. So once things started to pick up on that side of it, I lost track of time. Regardless though, this was just a great episode. Yuri adds yet another person with something to hide. The amount of deception within this family is just making everything fun. And Anya didn’t even really get involved with this one. Her “Uncle” arrived a bit too late in the evening for her to immediately get involved in it. 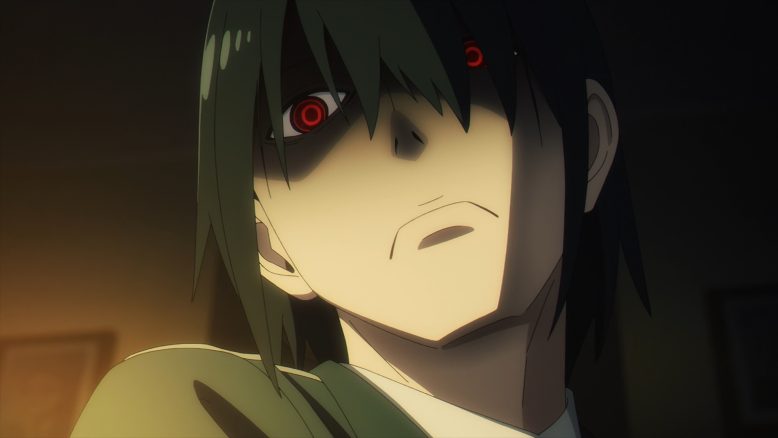 He’s definitely good at his job

Yuri can be rather…intense. I suppose it makes sense that he’s Yor’s brother. He matches both in terms of being extremely determined, caring about his family, and being rather loose when drunk. Considering she crushed his ribs with a hug I think we can say he doesn’t share her supernatural strength. But in general, he’s a pretty capable individual at his job. It’s kind of funny how they both got into careers that can be rather messy and yet seem to have done it with the best of intentions. Yuri believes he’s doing good by his sister and his country by being part of the secret police. While obviously Yor believes in what she’s doing when it comes to assassinations. The same goes for Loid of course. Everyone is on various sides of these political issues, but they can share that element.

The interrogation captured how extreme Yuri can be. He can be pretty upbeat and pleasant at first glance. But he won’t hesitate to throw down evidence (that he didn’t report for dramatic effect) or smash a person’s face into an ash tray. That guy probably set off quite a few triggers for Yuri. Not only was that guy leaking information for cash, but he was also cheating on his wife. I fully expect part of Yuri’s motivation for this job is to clean scum off the streets and protect his sister by doing so. It does make sense why he’s extreme in that respect. Although I’m sure it could lead to a lot of good people getting killed or locked away. This guy did it for purely selfish reasons, but I’m sure there are plenty leaking information because they believe it’s the right thing to do. 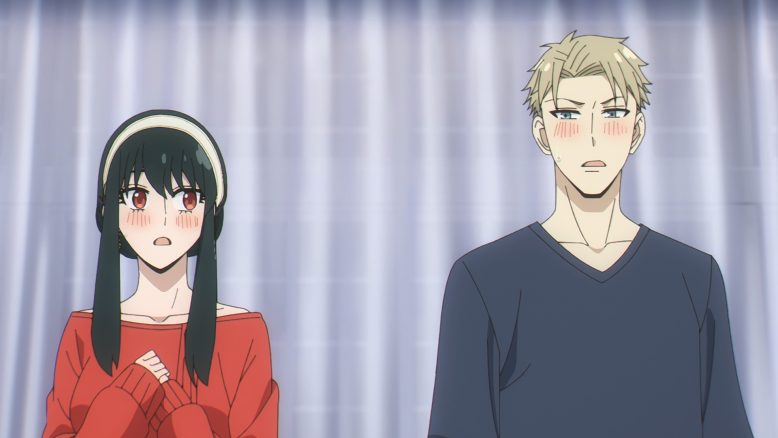 Will see how long this remains an act

It is funny how Yor’s concern about being suspicious for being single isn’t a big deal. There’s no way Yuri would allow his sister to be arrested. All the more so for reasons like that. I suppose it’s also possible that a motivation for him speaking up about her finding someone might have been because he understood the potential risks. I still think the main motivation for him encouraging her to find someone is because he does want her to be happy. She gave so much of her life too supporting him and he wants her to live for her own happiness.

Obviously Yor still has reasons to be concerned and want to protect herself. Being an assassin is hardly a legal profession. Even Yuri wouldn’t be able to protect her if that was found out! So, I won’t say that her desire to use this family to protect herself is completely wrong. If she was looked into for being single then it might lead to her main profession being discovered and that would be bad. In that sense she is the same as Loid. Both are using this family to keep doing what they believe is right. It’s just that Loid’s motivation absolutely requires the family to exist while it’s just a convenience for Yor. 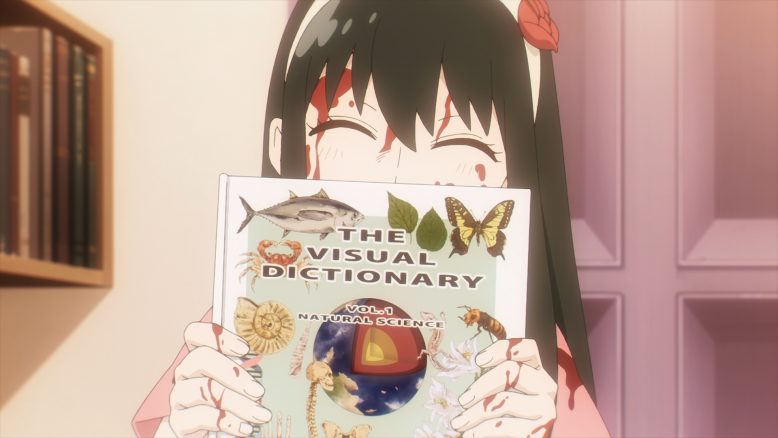 She worked so hard for her brother

All that being said, I’m amazed Yor hasn’t been arrested! It was absolutely sweet seeing her show up in those flashbacks wearing a big smile…and the blood of her victims XD. Yor has always been cute whether we are talking about younger Yor or modern day Yor. She really did work herself hard for the sake of her brother. I do feel like her organization might have taught her to clean up after killing people sooner, but she eventually picked that trick up! If you take away the extreme elements, they have a pretty nice family bond there. Yor gave everything she had to raise her brother and let him take full advantage of his natural talents. It’s only thanks to her sacrifices that he had the potential to reach the levels he has.

In that sense it is kind of perfect how Yuri also picked up a dirty job for the sake of his family. No doubt seeing her showing up at home bloody all the time just crystalized his motivation. If he worked as hard as possible then Yor wouldn’t have to anymore. Of course, he doesn’t realize that she never stopped. But the intention is still clear as day. He’s made it so she shouldn’t have to worry as much about him. Although with his extreme personality…she should have reasons to worry in other ways. Thankfully his flaws allowed her to lie about why she never told him about her marriage. That kind of BS “oops I forgot” thing wouldn’t have worked with many other people. 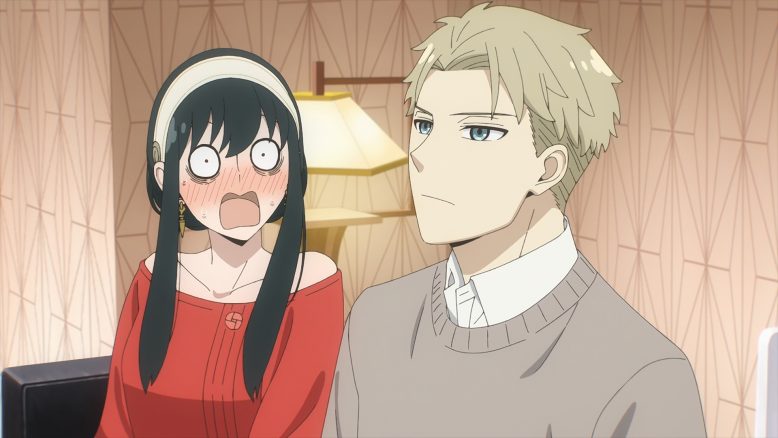 This family is full of great reactions

There is a long road for Yor and Loid, but I’m looking forward to seeing them develop. Loid can be logical (and think very fast) but obviously his relationship with Yor is different than it’s been with others. Even he had to react honestly at the over the top ‘couple’s accessories’ he set up for them. They can deny it to Anya all they want, but clearly there is something there. The innocent reaction to their hands touching is also good evidence of that. It will take time though for them both to grow closer and appreciate that. Yuri’s drunkenness makes the whole “kiss to prove your love” work despite being childish. It seems unlikely that they really will. But if nothing else it allowed the episode to end on a great moment. 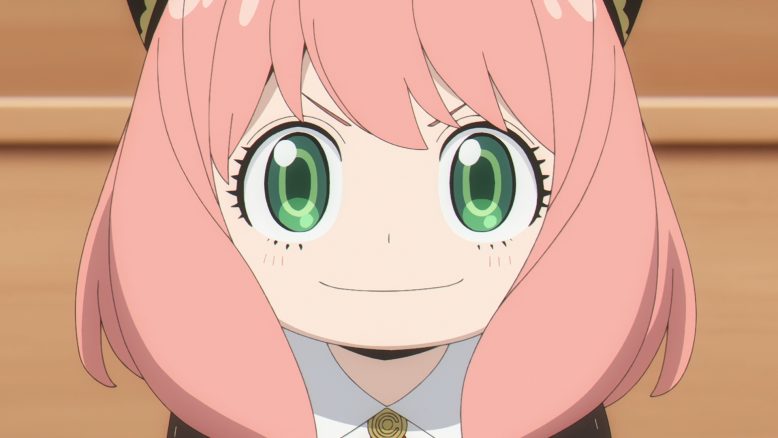 I love her confidence

I love when the show focuses heavily on Anya and her school life. But I also enjoy the focus on the other parts of this family. Loid and Yor’s relationship have a lot of potential. They are both pretty amazing at what they do and this is such a good chance for them to find a bit of happiness. In a sense it will probably be better if they miss a chance to kiss here. It’s a bit silly to say, but it’d be nice to see their first kiss be one that they both legitimately want. I also hope we’ll see a bit of Anya in the next episode. Her using Bondman to learn about math was great though. Even if she’s not a big part of the next episode there’s no doubt she’ll get her moments to shine.