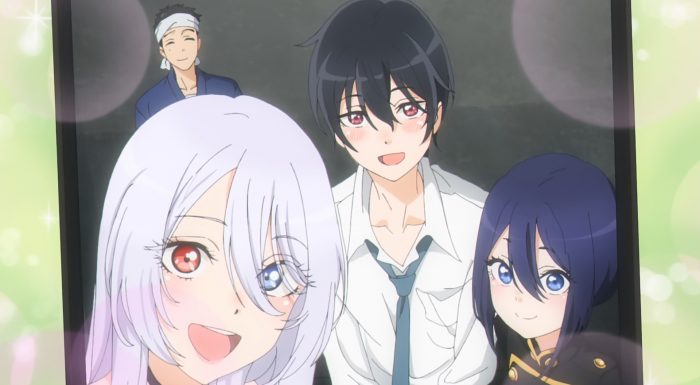 The payoff scene at the end of this episode was well worth the time spent getting there. I did expect that Shinju would end up cosplaying eventually. But I wasn’t entirely sure it would actually happen this fast XD. I am glad for her though. Even if her rationale was something that even Gojo could guess at. It is nice that the kid sister was helped out and that the three of them got to enjoy their cosplay together. A lot of hard work went into it, but it definitely paid off in the long run. Not sure if they’ll team up for another group cosplay since that depends entirely on series. But it is nice that this dream got to come true for the various girls. 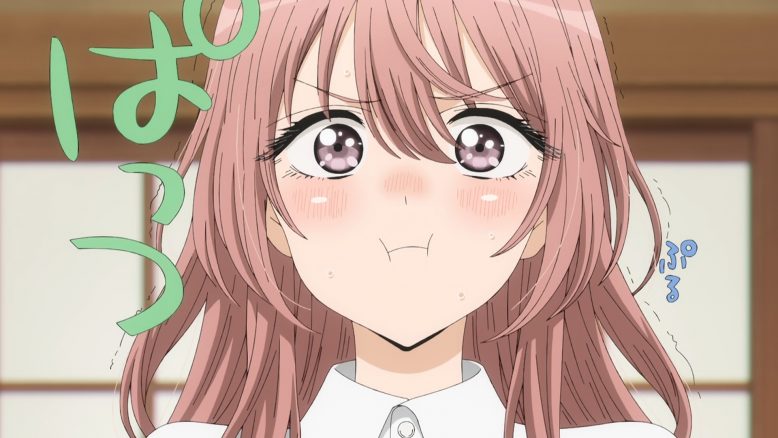 She worked hard for this

Good for Shinju in all honesty. She’s a nice girl who was battling some confidence issues. I think it’s fair that Juju hadn’t spent that much time exploring her sister’s potential interest in cosplay. She has a lot on her own mind and cosplay was something she was doing for her own sake anyways. I’m sure Shinju tried to hide it from her sister the most. While anyone could have noticed this, it does make sense for Gojo. Besides him just being the main character, he is someone who can empathize with her on a certain level. He has had his own crisis of confidence and struggled to even try and talk about his own interests with others. So, I can see him noticing that Shinju was hiding her true desires a bit.

Thankfully Shinju didn’t have a very complicated cosplay desire. They would have been in huge trouble making this happen if she wanted to be a Tuxedo Mask type of character XD. Thankfully Soma was a fairly easy to manage cosplay. He is just a guy in a school uniform after all. A male school uniform which is even better and a uniform that is similar to the anime character without many alterations. That really saved them since all Shinju had was her allowance and I’m not sure how much money Gojo actually has himself. 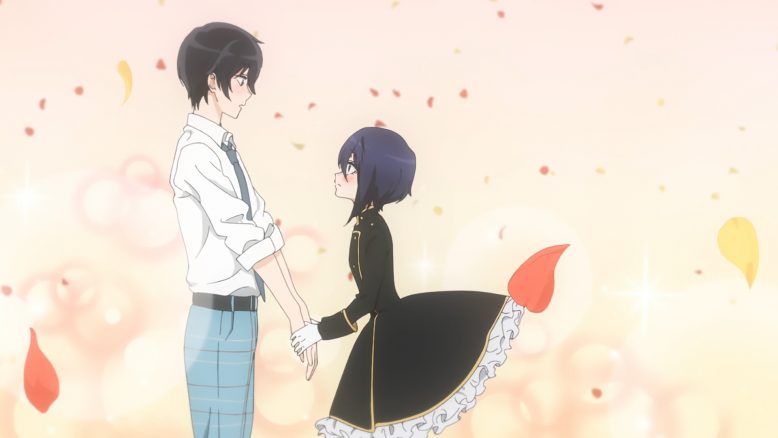 Imagine seeing this without context

It really did work out nicely though. I can see how Shinju had no faith that she could make this happen. And maybe her sister’s stance on not cosplaying characters that she doesn’t fit in terms of body type influenced what Shinju thought was possible. After all, she did have some hurdles to cross before making this cosplay possible. Thankfully she did actually still pick a character she had some qualities of. Shinju is tall and that’s a huge element that can’t really be compensated for without stilts or something. All she really needed was a trick to conceal her chest, a wig, and a bit of makeup work. That’s still a good amount of work, but nothing compared to the outfits Gojo put together for Juju and Marin. 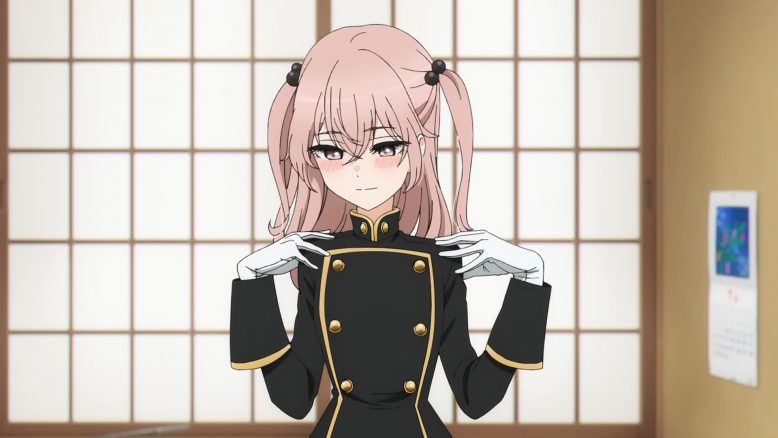 You can feel the happiness here

While this episode gave a lot of focus to Shinju, it is fair to look back at Juju and Marin. This was especially a dream come true for Juju. Getting this cosplay right meant a lot to her. It is as close as she can physically get to her dream. There’s no escaping the joy she felt in really having that outfit. The focus on that dream was last episode, but it did pay off nicely here. It also gave her good chances to chat a bit with both Gojo and Marin. With Gojo it was more on the technical side of things and making the outfit as perfect as they could get. Definitely helped that Juju understands a lot of the specifics herself so it’s a little easier on Gojo. Marin has the passion, but she’s just not as informed yet in terms of actually making outfits.

The parts with Juju and Marin were a lot of fun to watch too though. I loved the bit about Marin’s tweets getting reactions of shock that Juju really exists. Did people think she was CG or something? I know she doesn’t go to events since that’s not what cosplaying is about for her, but wow. I guess it doesn’t help either that her account doesn’t respond to others so her existence is a bit more mysterious. It is nice though that Juju doesn’t care if Marin takes some pictures with her or tweets about it. At this point they are friends and there’s no inconvenience for Juju herself. And besides, having a cosplay friend is nice for them both. Marin can keep getting more educated and they can both cosplay characters from the same show that they couldn’t handle themselves. There’s win/win in specific circumstances. 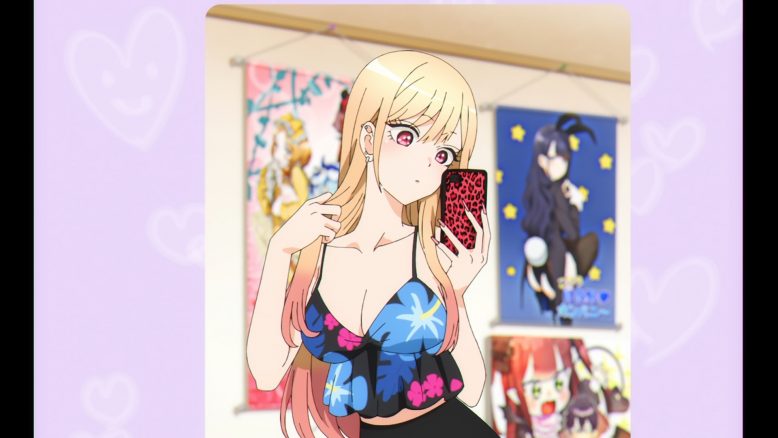 Not a lot to say with Gojo and Marin in this one. It is a lot of the enjoyable same. He’s into her, she’s into him, and they both are having a good time in general. Certainly, there is nice stuff in this episode like Gojo realizing that Marin can share his feelings on things. That both can feel the desire to be helpful. There are just things that each of them isn’t good at and that they can appreciate in the other. It wouldn’t be any good if Gojo just idolized Marin without realizing that she can feel that way too. And yeah, she’s definitely having a powerful impact on him at times. No shock he couldn’t keep up with texting her the whole time… 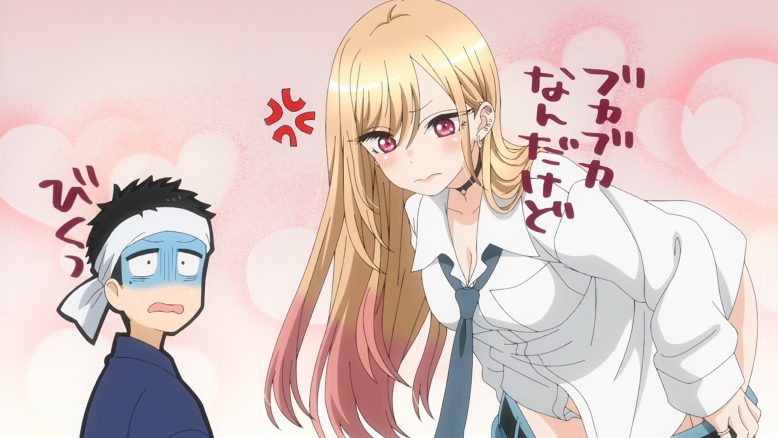 If we’re following the OP then the ‘oni’ type cosplay is coming up next. I guess that makes sense. While it’s not exactly a complicated one in terms of the outfit (since there isn’t much of one) I can imagine other issues having to be figured out. Though I’m sure using something like body paint to handle the skin tone issue should be easy enough to overcome. Although I’d imagine that’s really time intensive. I’m curious if we’ll see less of Juju and Shinju in the next few episodes. If they aren’t cosplaying in the same show, I could see them being less involved for a while. Even if they want to tease some interest from Juju in Gojo, I’d think they won’t bother going too far with that. Just leaving it as her being overwhelmed by close contact with a guy for the first time.

But this was a solid episode. I enjoyed Shinju’s struggles both in terms of admitting her feelings and tackling the cosplay. But it was really fun seeing Marin and Juju having a great time with their completed outfits. I hope they do spend a bit of time next episode showing off pictures of the group cosplay. But regardless I’m going to eagerly anticipate where we go next. I couldn’t quite tell if there are any other supporting characters ready to drop into the show, but we’ll see. There are only a few episodes left to go so that might be a bit tough to manage anyways.