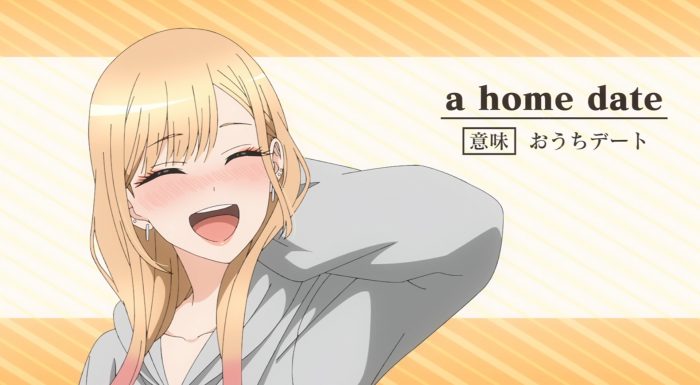 This show has definitely found a good balance. There is time for the characters to fall further in love with each other. But they also are giving a lot of focus to the cosplay and even Gojo’s improving skill with creating hina dolls. The show doesn’t get caught up in just focusing on one thing. And honestly, I’m finding myself enjoying the snippets of these fictional series that they reference for the cosplay. You can definitely pick up on the various franchises that they are drawing references from. They definitely feel like shows you could have seen existing in the past. 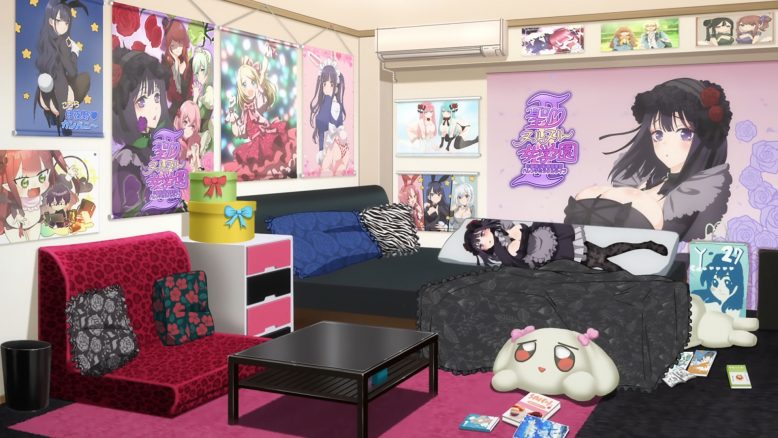 Marin has some nice merchandise

I suppose the one thing keeping the romance from taking off is how the main characters politely take turns swooning over each other. If they ever got caught doing it at the same time then their relationship might go to the next level XD. It really stood out for me in this episode. Gojo starts it up by visiting Marin and understandably getting overwhelmed seeing her sleepwear. No surprise he’s so nervous after going inside her house that he was looking ready to pass out or throw up. Seeing her room naturally cooled his head off and allowed the focus to switch to Marin freaking out. Of course, her version of freaking out is pretty self-aware and mostly just being overwhelmed for how hard she is falling for Gojo.

The only thing I hope is that they don’t drag out this pattern too much. It is fun seeing Marin fall into incomprehensible internal monologues over having a home date with Gojo. While Gojo throwing up is a bit less fun, I can understand how that whole situation was overwhelming. So, it is fine to keep this up for a little bit. But at some point, someone has to break the status quo here. At the very least Marin is pretty well aware of her own feelings so she’s the prime candidate to do that. But it would be very much like Gojo to be surprise. This is just one case where I struggle to see them maintaining the present situation. 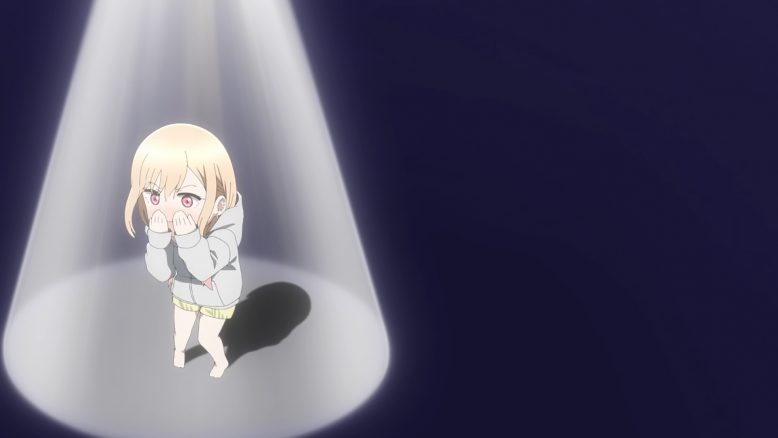 Cuteness through the roof

It only seems proper to give extra focus to Marin just being a very adorable character. While I’ll be happy to see things progress between her and Gojo, that doesn’t mean I’m not having a blast with her reactions to things. The girl just getting utterly wrapped up in her own thoughts about the home date and before she starts cooking. She has the right balance of great strengths and definite flaws. Her cooking was going fine, but she stumbled right at the end. But since it didn’t look anything like what she was going for…Gojo mistook it for a completely different dish XD. Marin is definitely one of the stars of the season with just how utterly enjoyable she is to watch. 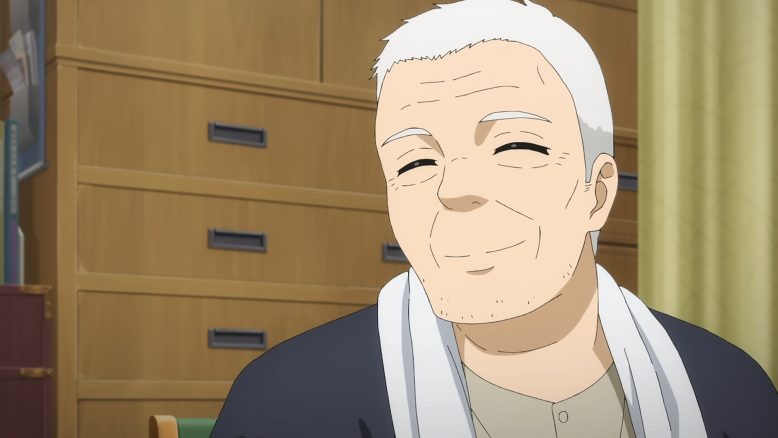 Understandable that Grandpa is proud

I did appreciate the momentary focus on Gojo’s growing skills. There is no doubt he’s gaining a lot from working on this with Marin. The chance to socialize for him is huge and of course he’s got these growing feelings for Marin. But at the same time, it is nice to see that his main interest is actually getting something out of this. And in this case the key is having to work on an actual person. There are just more things for him to take into consideration and reasons to try and be hyper focused when it comes to applying makeup on Marin. And I’m sure he’ll continue to gain more through learning to make cosplay. At the very least it is a good message to say that he can gain skills to make hina dolls by looking at things beyond just hina dolls. 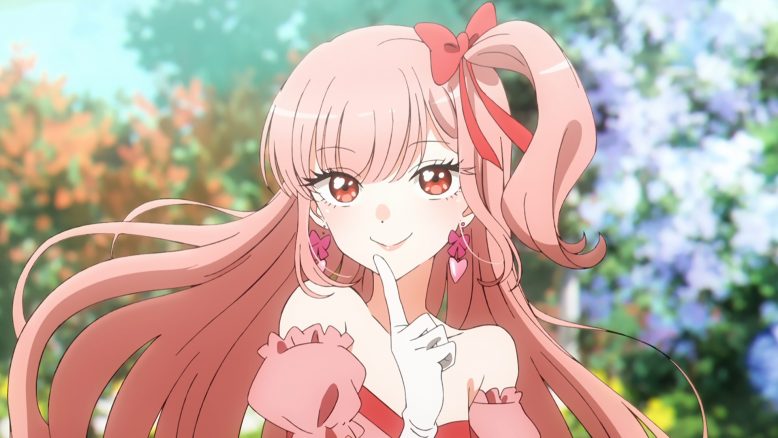 Juju shines in cosplay as well

At least they did find a pretty good way to get Juju to go along with the duo cosplay. Let’s face it, saving that much money is more than worthwhile. Plus, on a certain level it is a good thing for Juju herself to make some friends. Sure, she has her sister and clearly that has been working fine for her. But I don’t think it can be a bad thing to gain some friends in Marin and Gojo. They do have quite a few things in common and seem to enjoy some similar franchises. Well at least Juju and Marin since Gojo is very much only checking out series that Marin is cosplaying. And it is just a win for all parties to split the costs to a studio and being able to put more money into their respective cosplay.

Honestly this show reminds me of a sports anime in some ways. They are taking time to steadily build up the audience’s understanding of cosplay. This episode giving a great deal of credit to the value of eye tape, good cameras, and even software to adjust and touch up pictures. Some of these things could be understood without a great deal of focus. But I still appreciate the show building up our understanding using Gojo as the vehicle for learning. While this isn’t unique to sports anime, that was the first thing I thought of. You can’t always count on the audience being experts in something and it is nice to help build that knowledge base. 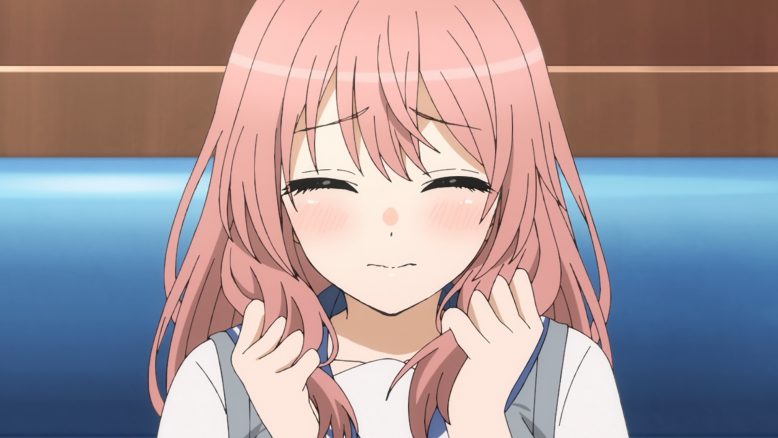 Welcome to the show

This was another really solid episode. I can’t comment too much on Juju’s younger sister since we saw so little of her. I can imagine though that she’s had her own struggles. She isn’t just a bit taller than her older sister, but she’s just absolutely huge for her age. That she’s actually taller than even Marin says a lot. But hopefully she can get a bit more comfortable despite hanging around with people a good deal older than herself. One more good character added to the mix wouldn’t be a bad thing. Now I’m getting pretty excited to see the cosplay come together. Juju and Marin should be quite the sight when fully set in their cosplay.