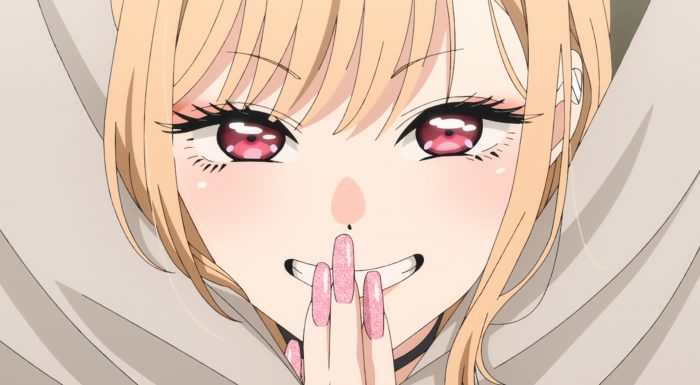 To say Gojo is overwhelmed at times is putting it lightly. But that’s good in a sense. He needs these pushes out of his comfort zone. Otherwise, he’s just going to back away like we saw in this episode. It is understandable that he’d be uneasy and overwhelmed. Even if it was partly by choice, he is going from relative social isolation to the social circle of one of the popular girls in the school. Completely understandable that he’d be uneasy about what people are saying. But it’s also true that he was making the wrong choice there. The point was already made to him in episode 1. He’s got to stick with what he cares about. The friendship that is forming with Marin is something. He shouldn’t be running away from that because he’s concerned about what people he doesn’t even know are saying. It is tough though. 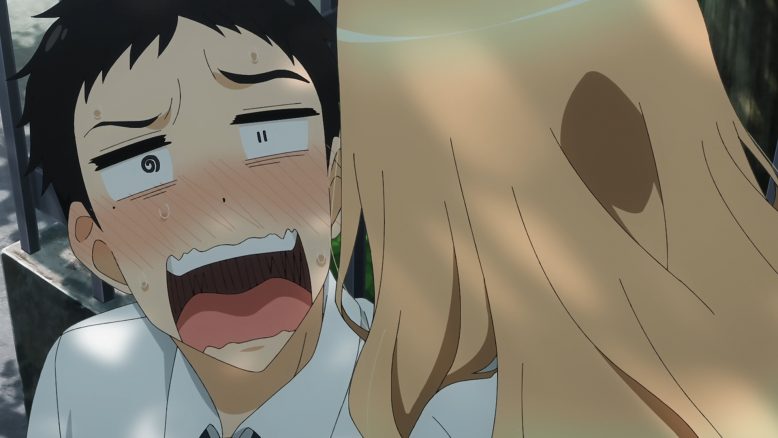 Thankfully they didn’t drag out the avoidance thing. It does fit the character to be sure. But at the same time, I wouldn’t want to see a whole episode of that with drama and difficulty. Just spending a bit of time with him doing that before Marin finally gets him to talk was good enough. And thankfully she didn’t drag things out either. Just made a completely fair point about them already being friends and just messing with him a bit about the dating thing. I’m sure rumors are something she’s dealt with before. She’s definitely not going to let gossip like that slow her down. Of course, Marin isn’t unstoppable and perfect. But at least in this circumstance she can handle things pretty well. It really is up to Gojo to steadily build up his confidence and resilience. Not easily done, but something he’ll have to work towards. 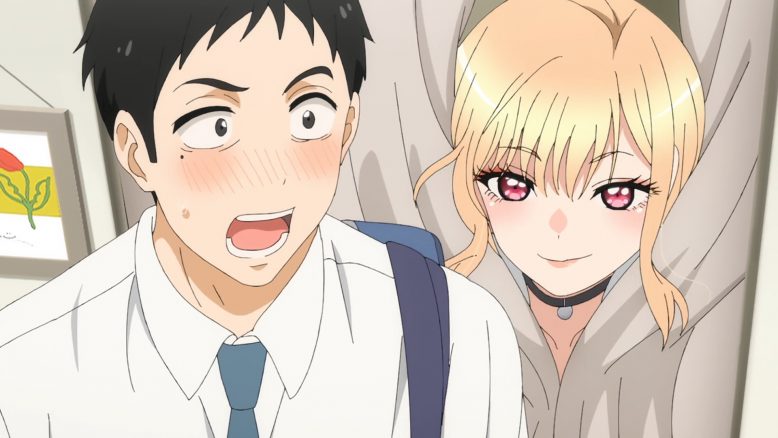 No question that this show has been a fan service machine so far. They are putting in the effort with Marin in particular and it is working. But the big thing is that the story is continuing to move forward at the same time. Though they are definitely having fun with things like that opening sequence. I mean wow they really didn’t hold back on both the dream and the consequence of it. Not that there isn’t fun to be had with things getting a bit out of hand. At least they are steadily working towards their cosplay goals. Just making sure to have fun along the way. Whether it’s fun for the audience or just Marin in the show messing around a little bit. 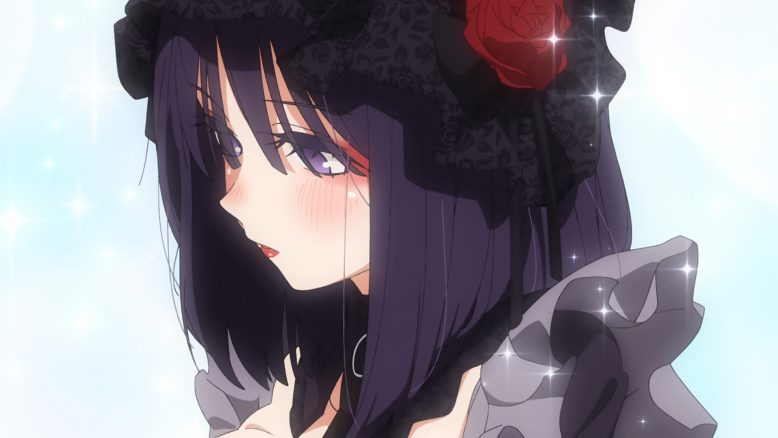 Nice attention to detail by Gojo

It is funny in a sense how Gojo is only slowly realizing his value. Without him there…honestly, I think Marin would be a year or more away from ever getting her cosplay finished. Well, either that or she’d have to cave and pay someone that is good at making cosplay to do a custom job for her. There is so much to take care of that understandably went under Marin’s notice. She has the eyes and focus of a fan which makes sense. She wants to cosplay as this character she loves. But one thing she lacks is the attention to detail that comes from Gojo’s years of work towards Hina Dolls. He has experience she lacks even if he hasn’t made outfits for people. So, he can notice important elements that fit the setting of Shizuku’s game and other smaller details.

His value to this is huge and Marin understands that. It is only natural that she pays for the cosplay materials. This is a project she started and asked Gojo to help her with. Considering he’s putting in all that effort it’d be unreasonable to ask him to buy the materials. Of course, from his perspective he’s gotten a lot out of this. And we’re not even talking about the fanservice stuff. There was good reason he agreed to help in the first place. The way Marin lives her life and the validation he got for his own interests was more than reason enough to help. Still, I can understand Marin wanting to pay for this stuff since she’s getting the most use out of it. 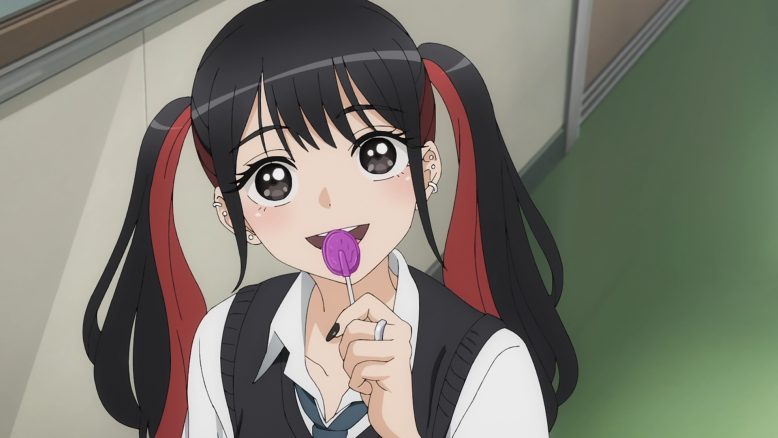 I also wanted to give some credit to Marin’s social circle. It makes sense in theory that they wouldn’t have a big issue with Gojo. Marin’s someone that can’t stand people harassing others for their interests. So, there’s no way she’d have friends that would be mocking Gojo for hanging around Marin. Even if they likely don’t know why he and Marin are spending time together. They are just pretty friendly in general and kind of considerate at the same time. It’s obvious how difficult things are for Gojo with how friendly Marin can be. So having friends that get that is nice. Even if they can’t really stop her XD. 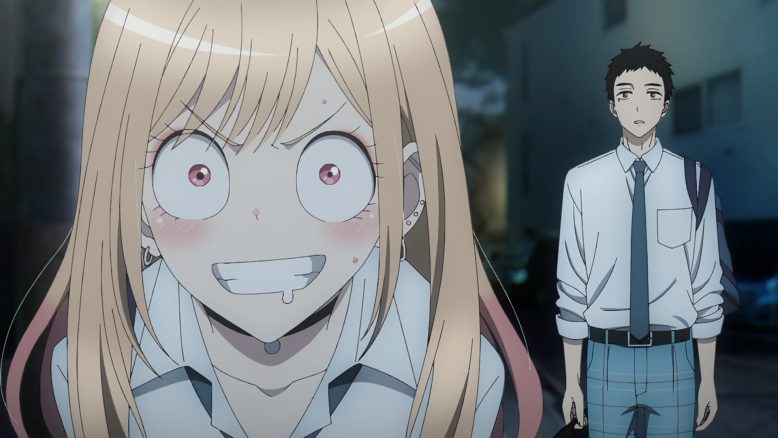 Marin has great expressions too

This was a solid episode. They are putting a lot of effort into this cosplay and making sure we keep up with the steps. There is a lot to handle and that’s becoming increasingly clear. Putting together a whole outfit, plus wigs, contacts, etc is a huge order. All the more so with Marin having a 2-week goal. I’m sure if Gojo told her that was a tall order she’d reconsider that specific event. But I’m sure he’ll soldier through without expressing that until they are pretty close to completion anyways. Thankfully he is hard working so it should work out somehow.