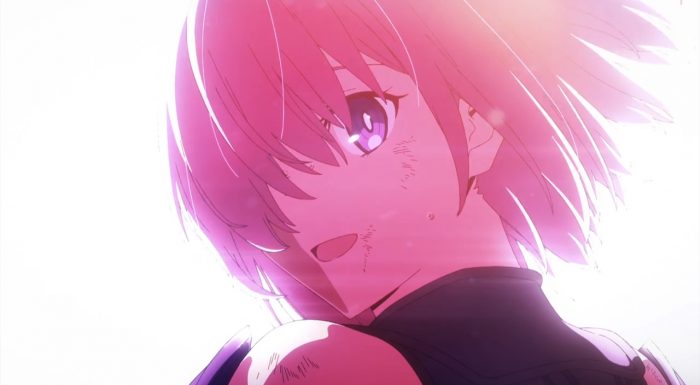 I’ve been waiting to watch this movie for a long time. Ever since the Babylonia anime ended in 2020 this movie has been coming. But finally, I get to talk about this all the way in 2022! And this was a lot of fun to watch. This really is what the first part of the Fate/Grand Order story has been building up to. A huge showdown with the big bad and trying to recover a future for the human race. Of course, they couldn’t spend much time really building up to the conflict itself. This really is the culmination of entire adventures so it was for the best to mostly just jump right into it. They did set some things up when it came to Romani and Mash. But mostly they just made sure to give as much time as possible to the fight versus Goetia. 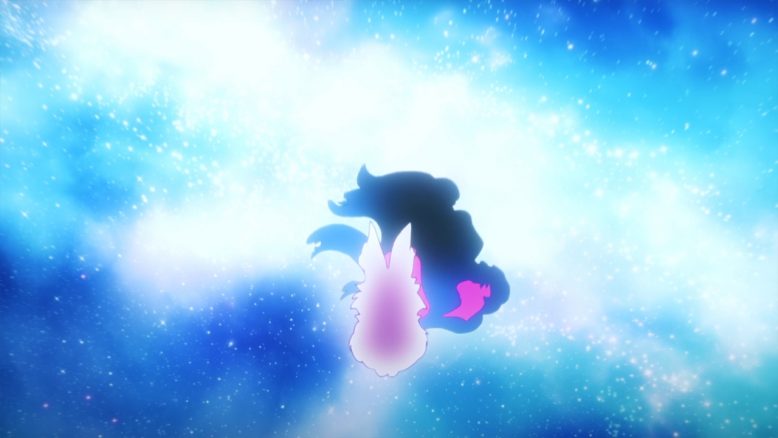 This could have been explained better

There was one element they couldn’t really do much about. That was the fate of Mash. They did give some visual cues about what was going on there. But how she magically showed up alive at the end had to be rather confusing to people. They did at least hint that it was connected to Fou but…there’s only a small visual for anyone to really wrap their head around. So, I’m going to delve into it here since it isn’t as if there is another anime coming that would actually resolve it.

So yeah, Fou effectively is another one of the ‘Beasts of Humanity’. Babylonia showed Beast II (Tiamat) and this movie was heavily about Beast I (Goetia). Fou is Beast IV. There’s a lot that could go into explaining his origins, abilities and everything else. But simply put Fou chose to sacrifice his sentience and characteristics as a beast in order to fully resurrect Mash. He’d been gathering energy across time and if left alone he would have turned into quite the threat himself. But he chose to give that up to bring back Mash from oblivion. It was a move that did allow for a miraculous return for the character, but effectively turned Fou from a clever individual into simply an animal. As big a sacrifice as others paid in the movie, but one that didn’t get covered since they’d have to sit down to explain exactly what Fou is. 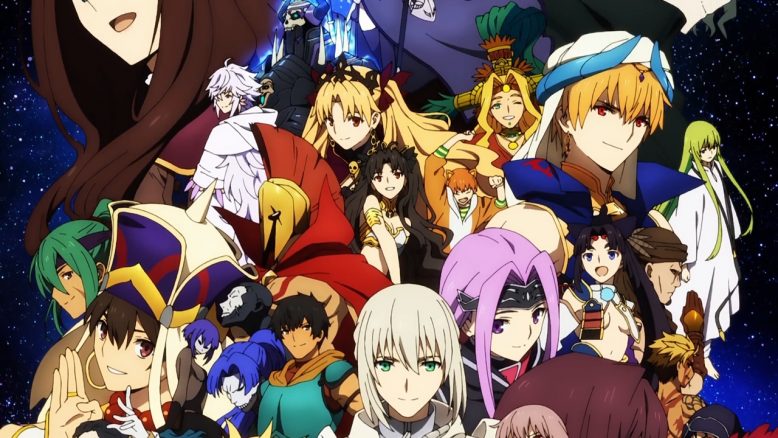 This movie is packed with characters!

No question this movie had a lot going on. They had to come up with a method to let Fujimaru really fight since Mash wasn’t going to be doing everything herself. Giving him some on the spot summoning allowed for both the familiar summoning chant to be used (which was nice), but also let us different characters taking on both Lev and Goetia that you wouldn’t normally expect. There were some interesting choices made to be sure. Using the child version of Alexander the Great was certainly a choice XD. Same goes with making use of Charles-Henri Sanson to take on Lev earlier. Obviously, game mechanics aren’t everything so choosing lower rarity servants from the game doesn’t make them weak servants. Still pretty funny to bust out those kinds of guys in a situation like this.

And in that sense, it was definitely great seeing all these familiar faces showing up to fight. The movie didn’t have time really to give them all the spotlight they deserved. There’s just not enough time to let them have long speeches outside of really Jeanne or Gilgamesh. But we still got to see some legendary figures that took their first chances to be really animated and they ran with it. And the thrills that came from the various showdowns in this movie were plenty strong. 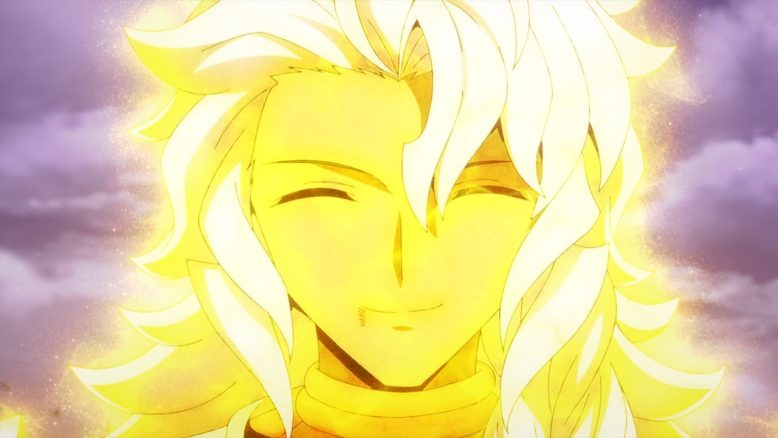 There was plenty going on with Goetia and Solomon. The reveal was still pretty good in having the Doctor walk in there and then reveal himself. And the shocked reaction from Goetia made it all the better. The one person he never expected to see appeared to make a sacrifice that he never would have believed him capable of making. It is fair to say that the overall journey meant something to Romani and it was thanks to seeing this journey that he was able to do what he did. Sacrificing his very place in the Throne of Heroes and removing any chance that he would reappear. Even if it meant saying goodbye to Fujimaru, that was something he had to do.

Of course, it wasn’t clear in the moment what he even did outside of delivering a solid blow to Goetia. There are just some things that the movie couldn’t quite manage with the runtime it had and no time to stop and give exposition. But the loss of Solomon and what he gave up was plenty clear. For those that played the game it is a sacrifice and loss that is felt. Since that is a character that was with the players for years. Even for those that have only seen the various anime, Romani was still a character that has been there through the various adventures. That he’s gone for good means something. Even if they could have tried to slip in some more dialogue explaining what he was doing and not simply what it would cost him. 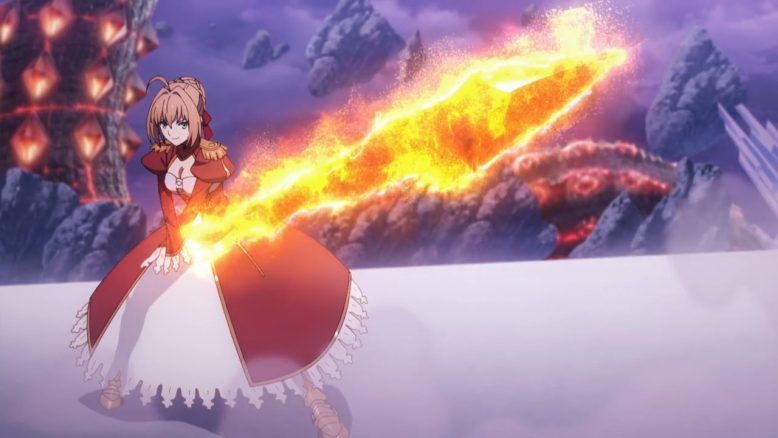 The action itself was something I want to give plenty of praise to. Bringing many of the major figures from the various story arcs in the first part of FGO was great here. You had Nero of course stealing the show (much to people’s dismay I’m sure). But beyond her there was plenty of highlight moments for Enkidu, Drake, and even Nightingale. They really let these characters take their shot at Goetia and that was a lot of fun to watch. And those characters at least got some moments to show off their personalities and express themselves. They weren’t long moments of course since the movie was in a hurry. But it was still plenty enjoyable to see these characters fighting in this battle. They gave it all they had.

I also want to give a special nod to Jeanne since she was the first major figure to show up when things were getting messy and lead to all the others appearing soon after her. She’s had some interesting anime history thanks to Apocrypha. But this was just an occasion when she could be as heroic as she needed to be and stand as the protector she’s suited to being. Obviously, her presence was in spurts since she was either on one battlefield or being banished from the scene by Goetia. Thankfully Goetia was too cocky and didn’t banish the heroic spirits earlier. That would have made winning nearly impossible. 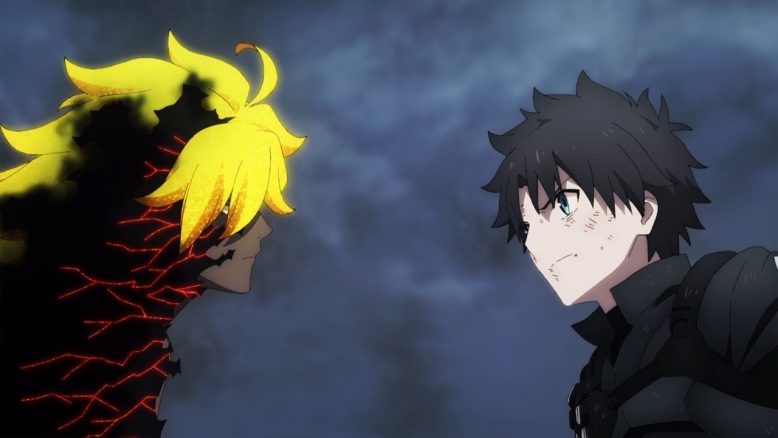 The final battle for Ritsuka and the sacrifice by Mash were both major moments as well. Ritsuka pushed himself to the limit. I also appreciate the movie doing everything it could with special mystic codes to give him the ability to actually fight without it being total nonsense. Obviously, the risks that were there along with using that mystic code didn’t actually kill him. But he did come out of the battle rather worn down and without Mash showing up at the end he would have died in this struggle. Props to him for holding up as well as he could. And him honestly getting enraged at Mash’s loss to the point he was ready for a suicidal charge was fine. It’d be crazy if he had easily kept his cool after something like that. Though he was only stopped by…someone ready to make their own sacrifice. 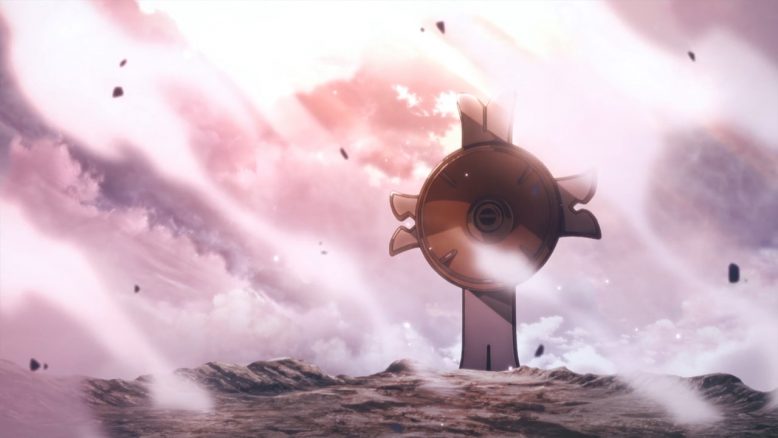 Mash gave her all

Mash’s sacrifice…was pretty intense too. That girl gave all she had and then some. Her life was one that was going to be tragic in some ways. She lived a limited time, never really got to live in the world as she deserved to, and would have died fighting. But she was ok with that. She had seen so much and that journey had forged her into her complete self. That she could give everything to protect her senpai and the person she loved was enough. And she even helped after death to let Ritsuka fight (with her shield) and kept his heart on the right track. Though I’m certainly glad for the stretch that was required to let Mash survive. Tragic endings do happen. But I don’t mind seeing happy endings too. Even though the FGO story is ongoing and this victory isn’t the end of that overall adventure. 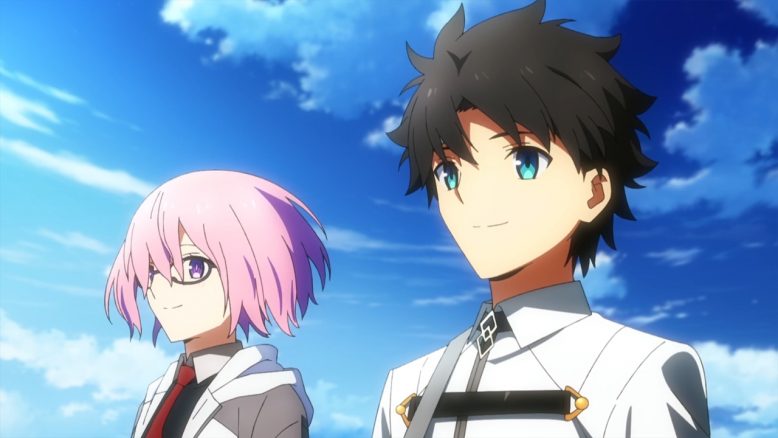 Even with a few flaws, I enjoyed the heck out of this movie. The best parts where everyone was just taking the fight to Goetia was awesome and I enjoyed that a lot. And they did the best they could with trying to turn this one struggle into a full movie. They couldn’t quite give every character a moment to shine and sometimes the most they could do was a quick cameo. That being said, I did enjoy what they managed to do here. We still got to see an epic showdown against Goetia and key moments were handled as well as I could have asked for. I’m not sure if we’ll see more Fate/Grand Order anime adaptations. Although I do think that’s still pretty possible. But if this is the last of the FGO anime then this was a nice way to go out. It was worth the wait.