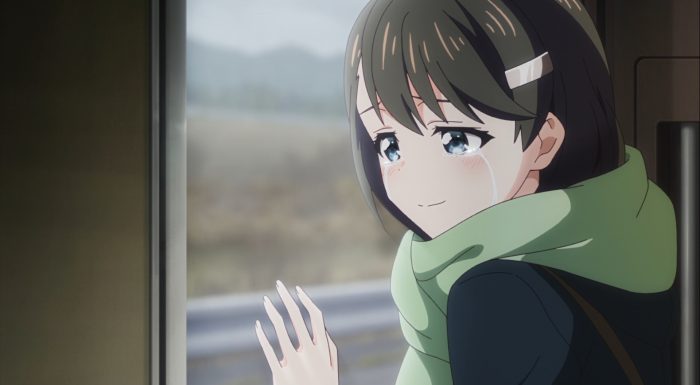 The show surprisingly listened to me and got itself moving along a bit faster. They did need to push the pace and actually play some hockey before the show was halfway over and managed to do just that. We even continued the positive trend of not focusing on the silly idol stuff and keeping it on the characters and the game itself. Fingers crossed that they just used that first episode stuff to ‘attempt’ to draw in viewers before switching it up on them by actually focusing on story, characters, and sport. I’m sure it won’t continue for the whole show. But the longer they keep that going the better as far as I’m concerned. It was nice to just play some hockey even if the cast still is just average as a whole. 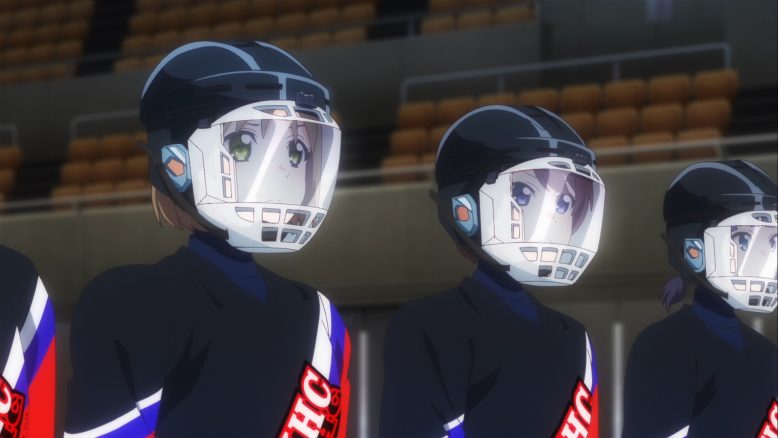 These characters are on my wavelength

They are getting a replacement for Mami to at least make up for not having the bare minimum players to even start playing a game. But they honestly need this new girl…and another dozen people to join with her. If anyone gets hurt then they are playing shorthanded and even without that they are going to get exhausted playing a game without any chance to get off the ice to rest for a few minutes. It’s like trying to play any sport like soccer, hockey, baseball, etc with only the bare minimum. Just a whole lot worse because hockey is basically like sprinting. Going full tilt for a minute or less and then getting off the ice to rest for a few minutes. Honestly, it’s amazing they managed to play for 30 minutes with only getting the minimal breaks between stoppages in play and intermissions. 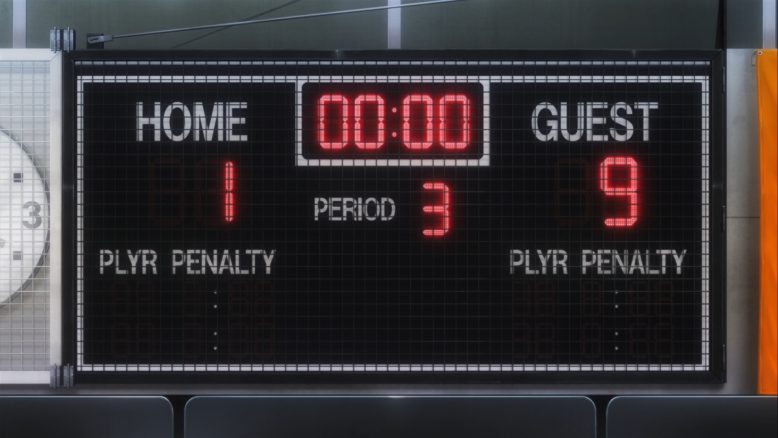 The result is honestly pretty flattering to the main cast. They could have been buried by twice the number of goals against. Stamina was a huge factor for this kind of game. The other team would be getting rests as they changed lines while the main girls would only get increasingly tired as the game went along. Honestly their opponents had to have stopped playing remotely seriously once the second period started. Not that the main cast are likely to be insanely bad. Three months if they already knew how to skate would be enough to at play somewhat decently. I don’t think kids in North America spend that many months training before getting into game action. Although they tend to play against those of similar experience levels.

The big issue is that they couldn’t really train. The coach was telling them to remember their training but what could they seriously practice? They couldn’t practice defending or attacking since they barely had enough bodies for one group. The coaching staff could help a little and play positions but there were still only two of them. It’s actually impressive they played as well as they did without any chance to scrimmage or practice effectively. That’ll remain an issue if they aren’t going to gain more players to bolster their lineup. 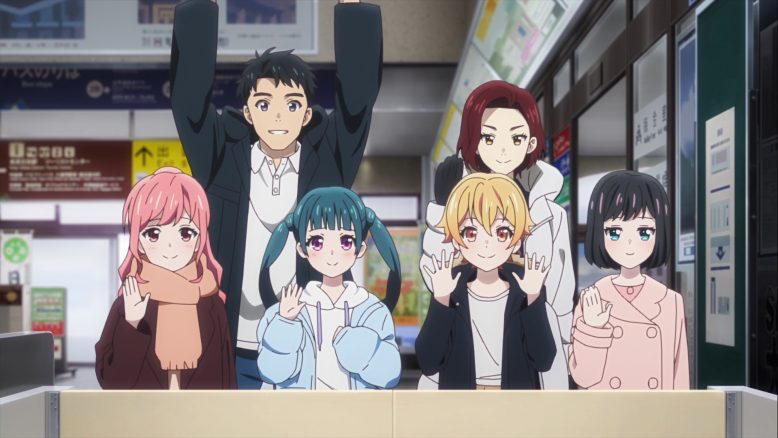 The stuff outside of the game was fine. It was nice seeing the group come together to support Mami and give her a nice sendoff. Kaoruko was given a nice chance to lead and remind them of what was important. They could spend time feeling sorry for themselves even though Mami is the one who has to leave all her friends or they could do something positive with the time they had left. Giving her as good a memory as possible was a nice thing. Although I’m not sure if getting blown out of a 1-9 game is a great memory. They managed to make that work for them with at least scoring a single goal. That was nice and pretty fair. That was probably their only shot on goal and that is the kind of moment where a cold goalie can give up a bad rebound. 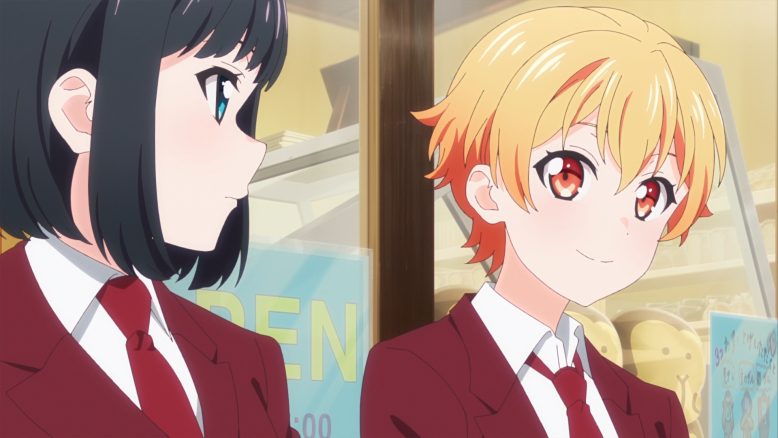 I’m a bit mixed on Riko guilt tripping her friend into playing hockey. Naomi did end up getting invested once they were moving along. But it’s a bit shady for Riko to talk about how she’ll quit if she doesn’t play the game with her. It is fair for her to quit if she’s not interested. But could she seriously not enjoy it with the others without Naomi? I feel like Naomi herself coming to that decision would have been better than her feeling guilty about Riko quitting originally. It was a small scene but it felt a bit weird. Was it supposed to be cute how she was guilting her friend into playing hockey with her?

That issue also came with Mami’s farewell. Was there a good reason for Manaka to show up at the last minute? Maybe if there was a scene of her talking to herself about Mami leaving while the others left. Or showing the scene where Manaka refused to go with them. But instead, they just skip to the cliché of her chasing down a train on her bike. We’re supposed to care about the farewell, but I’m left feeling like Manaka is incredibly self-centered. Everyone gets a normal farewell but she gets a dramatic moment where Mami is left screaming her name on a train and probably freaking out everyone within earshot XD. Drama is what it is and that’s fine. But I feel like they are hitting the surface level stuff without building up to it naturally. 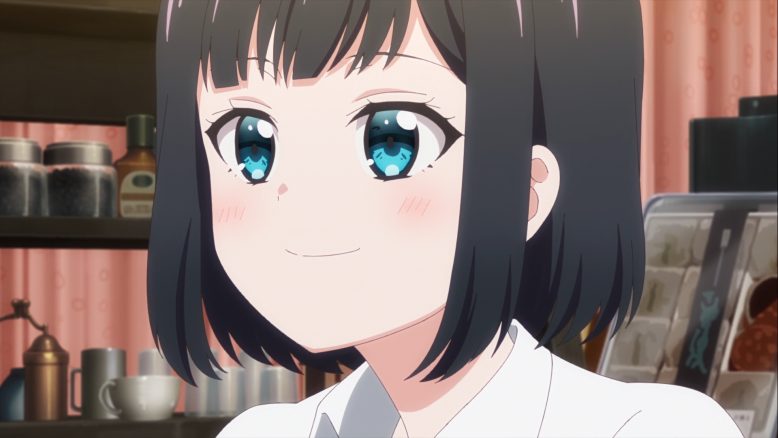 This episode despite my nitpicking was fine. I liked that the girls got a chance to play a game of hockey and that at least someone noticed that their team was way too small. Also, I appreciate that they weren’t forced into having a dance performance afterwards. There was some good stuff there. Kaoruko showed good leadership in getting the team to focus on doing something positive for Mami. Mami herself showed guts in falling but getting up to keep playing during the last period. Even the goal actually made sense since it was a fluky rebound that just barely turned into a goal. Naomi remains my favorite character because she shows relatable things like a passion for a certain mangaka. Just a better character than some of the others. But at least the show is doing some things well and doesn’t look bad. There is effort going into this.