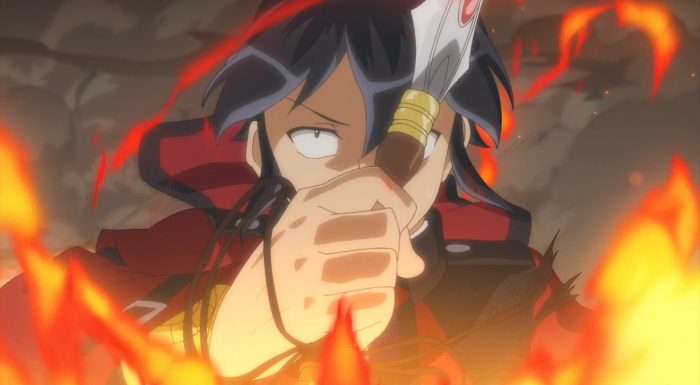 I can’t believe this show is already over. This show was an interesting one for me since I did read some of the source material, lost track of it for whatever reason, and then only remembered it when this show was announced. So, my expectations were high, but I wasn’t sure what to really expect. In the end though, this was an extremely fun show and I’m going to miss it. The last episode wasn’t as utterly intense as the previous one, but it still had a lot to offer. The Goddess dragging Makoto into a brutal situation and nearly got him killed. I honestly think she considered it a win/win scenario. Either Makoto would die in the battle or he’d take care of the Demon forces that were a threat to her precious hyumans.

Obviously even in the first case she probably hoped he’d do enough damage for her chosen heroes to clean up. It’s almost too bad we didn’t get to see anything from the Goddess herself. I’d just like to see if she’s freaking out over Makoto’s growing power or not. After all he’s still in an immature state. Once he really learns some magic, he’ll instantly reach a scary level. This was honestly one of the better opportunities to kill him that might be presented. 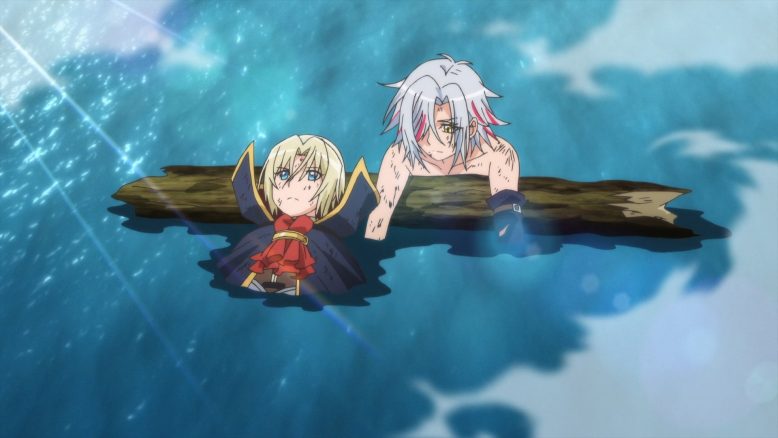 They got off lucky

It was a total miss on my part when it came to Lancer. Now that name wasn’t dropped in the previous episode, but Tomoe did mention Mitsurugi’s name offhandedly in episode 3. So, in the end he wasn’t one of the summoned heroes, but essentially in the same position as Tomoe. Lancer is a dragon that made a contract with Sophia and the rumor just spread that she slayed him. Certainly, she must have done enough when they clashed for them to join up, but I guess we’ll have to wait and see if that story ever gets told. There were definitely summoned heroes on that battlefield, but they just didn’t ever cross paths with Makoto. At the very least they don’t appear to have been on the same level. My instant guess is that the female hero might end up an ally while the male one will remain antagonistic. 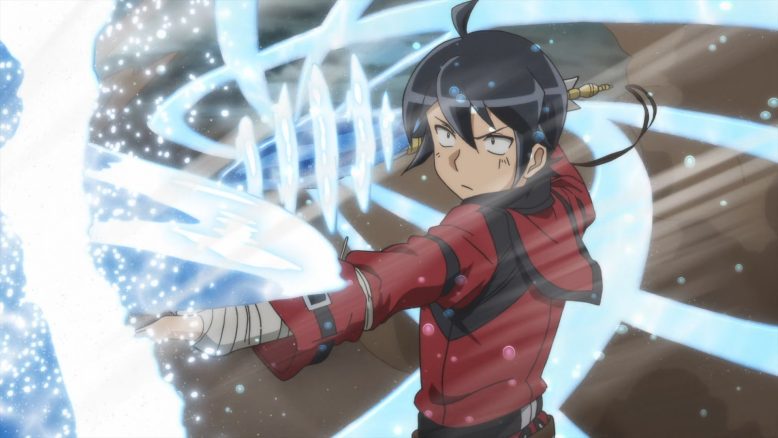 The action itself was a blast though. Makoto hasn’t had too many chances to cut loose in that sense. He did kill that adventurer last week, but that was more like stepping on an ant. There isn’t any challenge in killing someone like that. In this case he was hit hard while his guard was down and that made things more troublesome than they could have been. Makoto still absolutely outclasses Sophia and Lancer, but they did get some solid hits in. If not for the insane work by the dwarfs he might have actually died before he could bring all his power to the forefront. Having all that mana doesn’t help if he can’t use it effectively or fast enough.

Once he did start unloading his power though it goes intense in a hurry. It didn’t hurt that the other side kept antagonizing him as having the protection of the Goddess behind him. Thankfully as well that their gear didn’t eliminate the protection from Tsukuyomi. Makoto’s power was insane though and once he unleashed everything it basically wiped out an entire battlefield. The battle did stop and it was mostly a win, but the casualties on both sides were extreme. It just shows how much life can be lost if he isn’t careful about what he does. 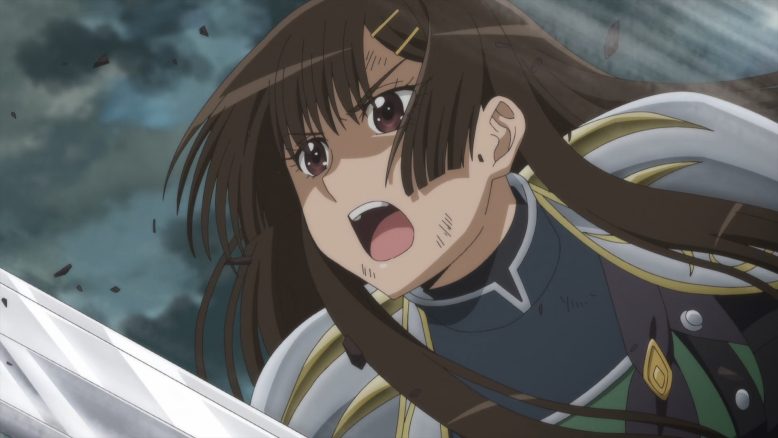 A normal hero trying her best

Things did mostly settle down by the end of the episode. Makoto’s shop is up and running which is good. Hopefully this time Makoto will have the luxury of studying and learning as much about magic as he can. And they even have a new Tomoe fragment. Of course, it wouldn’t feel right if it was exactly the same person. It also makes sense that Tomoe can just make a new fragment. I like the choice to use one of Makoto’s rings as a core. That should make her more than powerful enough to protect herself. The biggest fear would be the fragment ending up like her predecessor. Thankfully that shouldn’t be the case and now things can really settle down in the demiplane. At least until the next conflict inevitably comes XD. 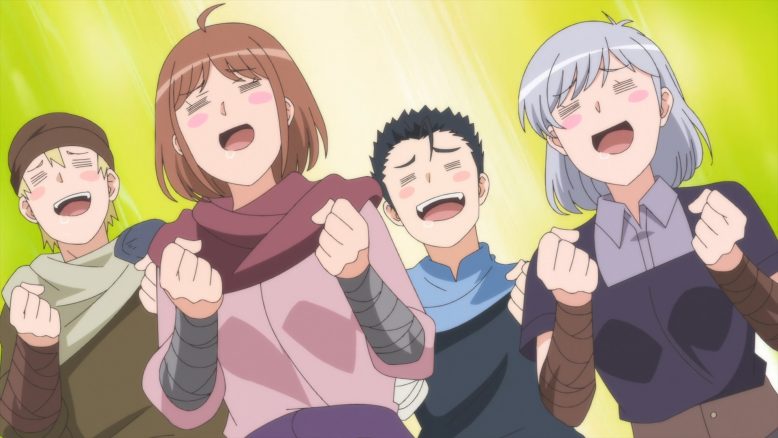 The biggest thing for me is the announcement that this show will get another season! I was feeling uneasy at the end of this episode when there wasn’t any real sign of an announcement. Thankfully it has gotten one so now it is just a matter of waiting a year or two. This is one of those shows I could have seen being a one and done thing despite being really good. Instead, I can now just enjoy how good the show was while keeping an eye out for what is coming next. 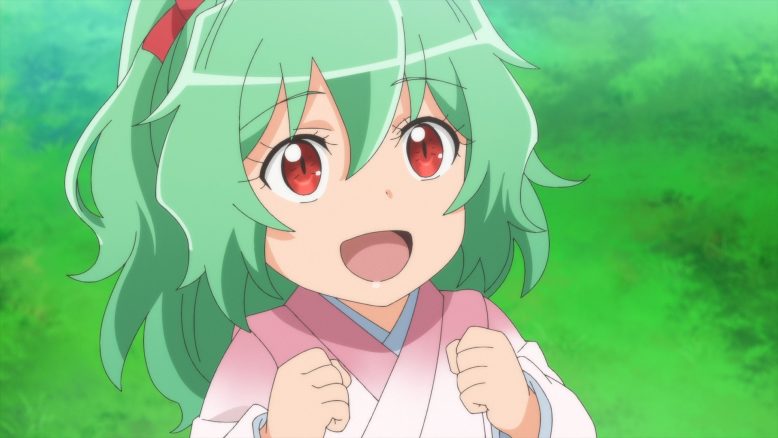 This show was rather balanced as a whole. It had a nice amount of comedy and poking at isekai things when it was appropriate. But it also very much knew how to get dark and serious when the time came for it. The second last episode really hit that part home. This isn’t a series where nothing of consequence happens. The loss of Fragment and that good guy Orc won’t be forgotten by Makoto or the denizens. And that loss ties in directly to how hard the characters work to avoid a repeat of tragedy. The real test there will be when more truly hateful people wander into the demiplane, but their efforts should help avoid that becoming a huge problem. 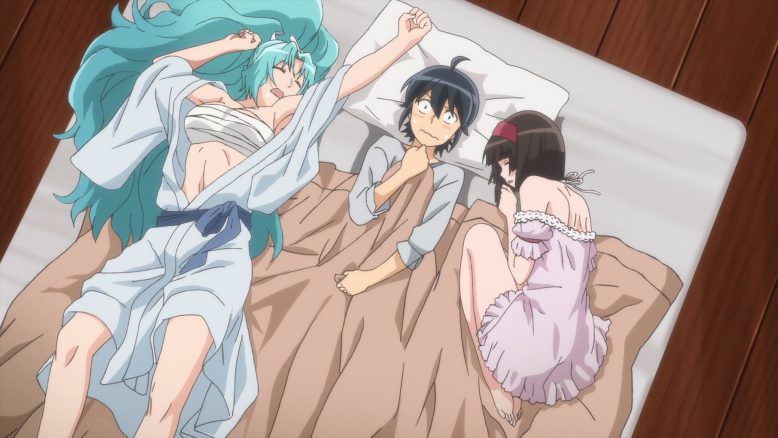 As a whole I just had a really good time with this. It’s funny to think how a giant dragon (Tomoe) and a scary giant spider (Mio) could end up such loveable characters, but it really worked out that way. It makes me hope that in another season we might see a bit of progress between them and Makoto. I can’t imagine this family barrier will hold up forever with how much that isn’t an issue for those two.

But, that’s a thing to think about later. It was really easy to talk about this show and I’m glad to have gotten the chance to do so. I have no idea how next season will turn out, but hopefully at least a couple shows are as good as this one ended up being.