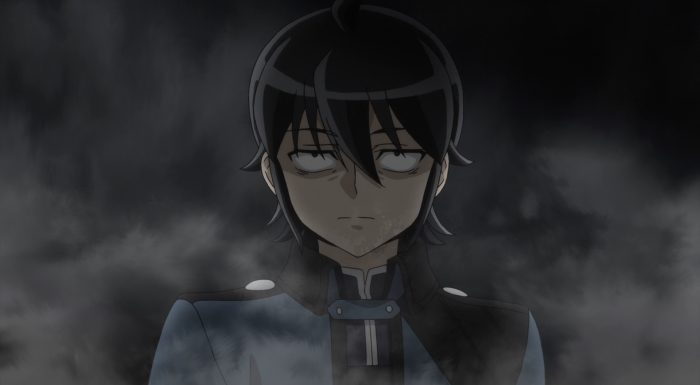 It is certainly true that you never want to truly anger a kind person and that was on full display here. Makoto has his dark elements, but as a whole he tries to do the right thing. He has incredible power, but he never even takes a position of leadership until it is pushed to him. And certainly, he does his best to both avoid taking lives and resolve things as peacefully as possible. Which makes this episode stand out since he was pushed so far that he didn’t even hesitate to cut down that adventurer. Her friends that died in the explosion had it easy. They were there one moment and gone the next. This woman got the full horror of being taken down by a being both powerful and beyond her comprehension. And it is hard to say she didn’t deserve exactly what she got. 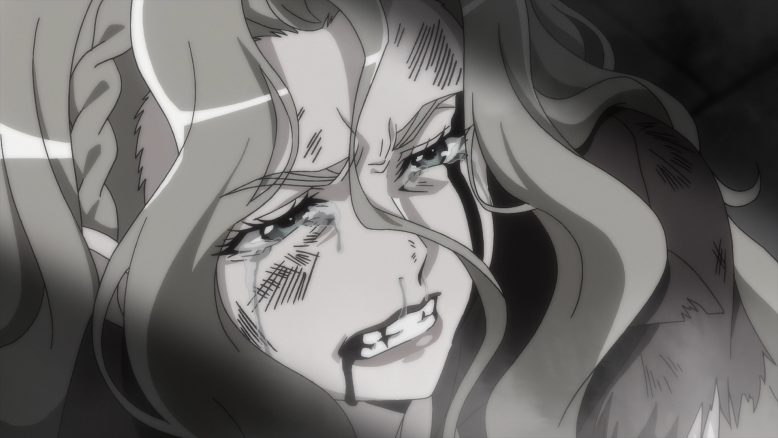 Some mistakes you don’t get to learn from

Obviously, revenge is a slippery slope and the whole “an eye for an eye leaves the whole world blind.” But I can’t really fault Makoto here. He tried to be understanding and showed a level of trust to the humans. The flaws to his thinking were giving people too much credit and underestimating the absolute greed of some adventurers. The awesome team with Toa that he met gave him a really positive view of people. Even after seeing some really terrible adventurers, he might have gotten a bit too used to the positive potential of people. This was a terrible realization that some people are truly awful.

There is a level of pure satisfaction in seeing revenge exacted in such a cold way. Honestly Makoto was barely even talking to her as much as talking to himself. He was processing the terrible thing that happened and really took his time. With how powerful Makoto is, he could have killed that person instantly and without much fuss. But he wanted to send a message first. To both use the knife that the orc had praised to injure the woman that took his life and then he simply moved to shut her up. Hitting home the terrible position that Goddess put him in. The normal human speech just sounds off to him. Which probably only made it easier to kill her. 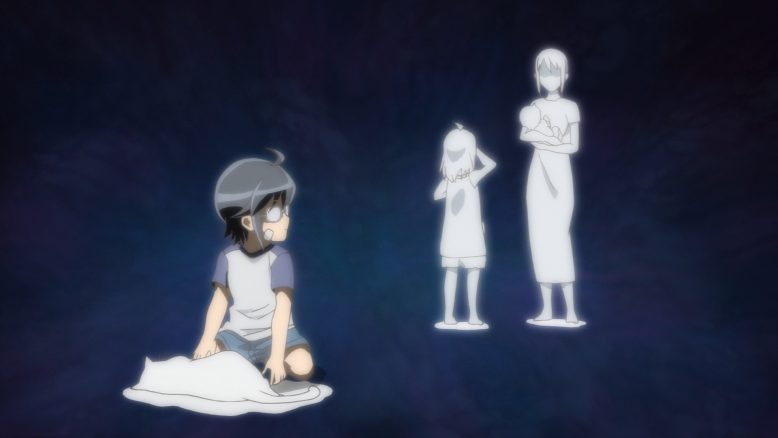 Something about this was unsettling

At least we did get a good look at a variety of things for Makoto. His first contact with death came from the passing of an animal. Maybe it was a pet or maybe just a dead cat her saw on the side of the road. But until that point death wasn’t even a concept he thought about. Heck he had to learn from that moment that death is sad. Which I mean could either be a healthy developmental moment for a child…or the sign that something is a bit broken in Makoto.

One can only guess at what made him cry after taking down that adventurer. Was it taking a human life, getting hit by the true loss of Fragment and the orc, or was it simply him reacting to the idea that he should be saddened by the loss of life? I don’t know, but regardless he went through a painful ride there. 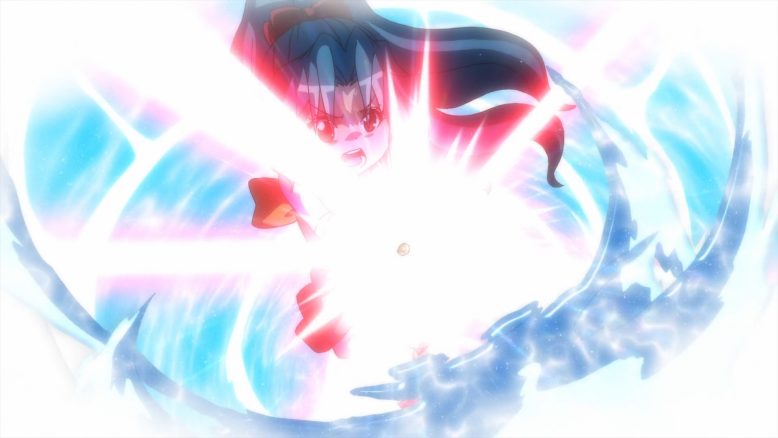 Went out a hero

This whole situation was a good lesson. They took security in the Illusory City too lightly and it had a high price. If not for Fragment’s quick thinking the damage would have been even more devastating. Makoto’s mana sealed in those rings was colossal and not many could do anything but die in the explosion that caused. It was miraculous that only two denizens died. At least they’ll be better suited to handle any adventurers that make their way there in the future and won’t have as many dangerous items laying around that could explode at a moment’s notice. The cost was high for this lesson, but at least it won’t be easily repeated. 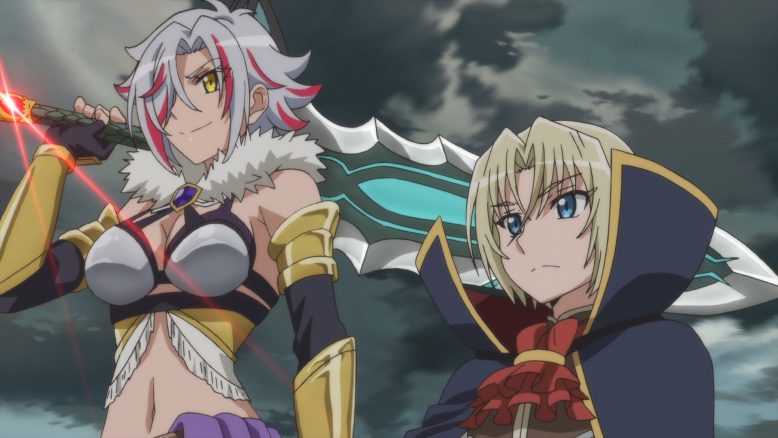 And now this is happening

Of course, the ending of the episode was a huge deal that changes things up severely. That scumbag Goddess has made her move. There’s no way that she accidentally dropped Makoto onto the front lines where the heroes and demon forces are about to clash. And I don’t think it was for the sake of using him against the demons. I suppose even Makoto could suffer injury when ambushed by the third ranked adventurer Sophia. She’s not exactly on the level of Mio and Tomoe, but that’s the point of an ambush. Plus, she was wielding a particularly dangerous sword. Considering the name ‘Mitsurugi’ I’ll presume this guy is one of the heroes that the Goddess summoned to replace Makoto. Seems entirely believable that she’d choose to summon a shouta like that. Makoto should be ok considering his strength, but who knows. They probably aren’t alone. 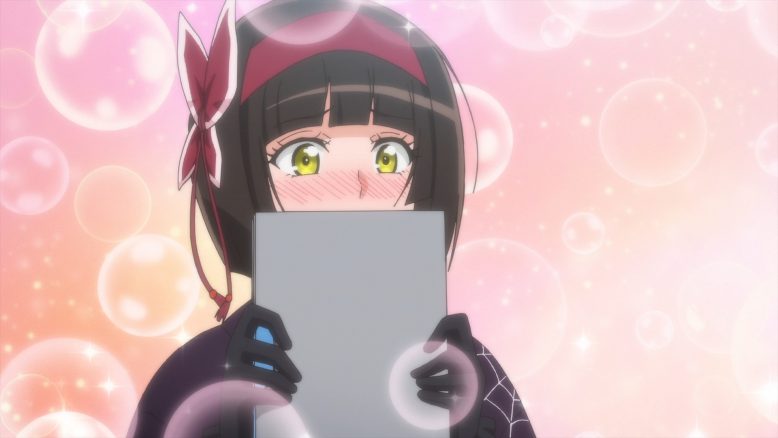 Needed some Mio cuteness after this one

I can’t wait for next week. The show is about over, but it should go out with one heck of a bang. You have Makoto being targeted, he’s injured (losing a couple rings), and honestly Mio/Tomoe are going to be pissed. If they can get to Makoto in time then it will be a bloodbath. If they can’t make it in time, it will probably still be fine since Makoto is strong. This episode was a ride and one of the best of the series so far.