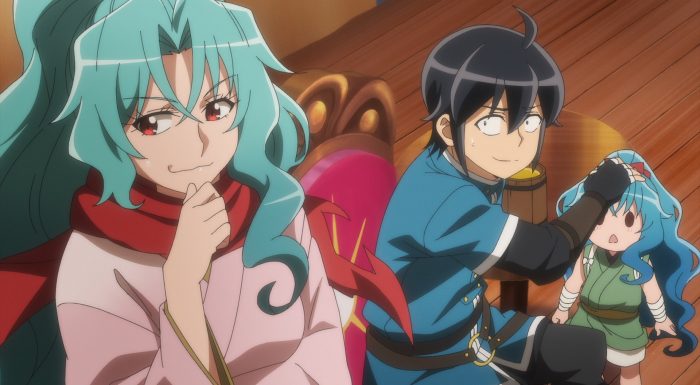 The show had been pretty steady lately. But this episode was definitely a step up with a lot going on. The ending itself was pretty hilarious with how events continued to spiral further and further out of control. It was almost a shame for the episode to have to end since I wanted to see how much crazier it was going to get. If nothing else it has me absolutely set to see the next episode. I can’t imagine it will just end where it did and quietly resolve. Not with all the parties involved being rather fired up. The only person that isn’t that emotional right now is Makoto, but that doesn’t mean he can handle everything. Just keeping Mio from slaughtering everyone will be enough of a job. 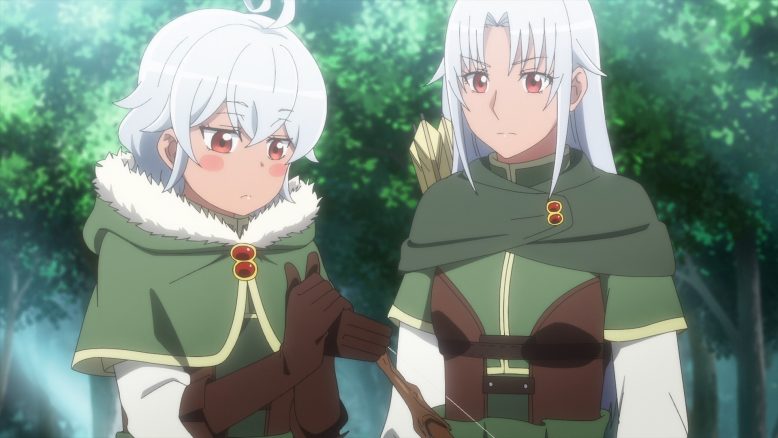 These two have no idea what they are getting into

It is no wonder that everything got so crazy though. You have Makoto who just wanted to negotiate access to the ambrosia flower which was fine. But Mio was pretty overjoyed at the little date she had with Makoto and the handholding was just a bonus. 31 seconds of happiness turned into absolute rage. I suppose they could negotiate with the corpses of those Dark Elves (I think). That alone would have been tough but manageable.

But then you had those stupid human adventurers showing up laying claim to the ambrosia flowers. Not just grabbing some, but instead wanting all of them…No wonder humans in that world have such a bad reputation. That level of absolute greed in a situation they are not able to handle is amazing. And things just spiraled out from there with some skeletal entity being awoken by all the activity. Since that guy was in the OP I’ll presume he’s an enemy. 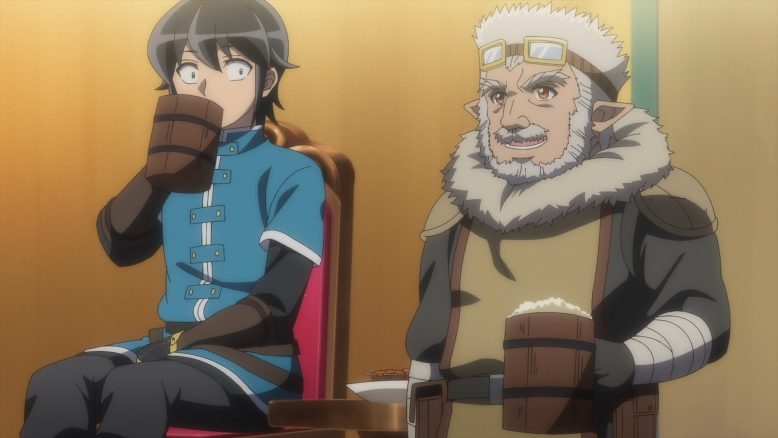 But that wasn’t even all that the episode had going for it. The early portion had a mix of smiles and literal tears. It was kind of nice seeing the various members of the demiplane getting to interact with Makoto. He’s somewhat become a figurehead for that place and that’s fine. But I do like seeing everyone actually getting to know him and vice versa. It makes them more than just denizens and makes them actual people. In particular I like seeing how the alke are pretty varied in their interests. Some of the species like the dwarves get locked into one main focus. But the spiders just seem good to try out a variety of things depending on their personal interests. 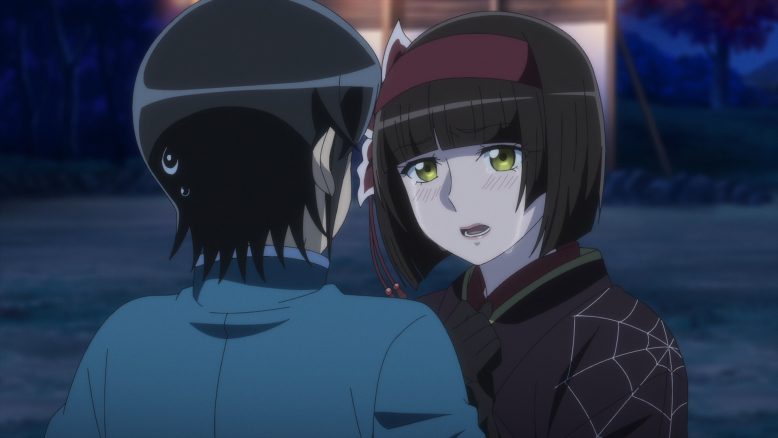 The big emotional thing was the reveal of Makoto’s training. It’s actually kind of scary how powerful he is and how he can do things that shock even himself. His training method actually making him insanely powerful. Maybe his level refuses to go up because he keeps dying and resetting himself. Or he’s just too powerful for the test to handle. Regardless, it’s pretty scary how he has been dying and restoring himself over and over again. Just looking at that one night and the amount of arrows…he had to have died 9 or more times. It is a good thing that Tomoe and Mio realized what was going on. Even if he can’t relax like he’d want…he can find other ways to cool his head than to kill himself. Plus I’m not sure any of them can handle Mio breaking down into tears each time he does this.

Even if he can survive that without issue the risks are clear. He’s going to continue getting more powerful to the point where even the most powerful items won’t be able to conceal his mana. And beyond that he’ll absolutely get the attention of that goddess. She wanted him to stay out of the way and I’m pretty sure becoming a living god would not exactly line up with that. He’d cause an outright war with the Goddess of that realm and I don’t think that’s a great thing. Even if he really dislikes that Goddess the effects of a planetary war against a divine being would cause suffering for the people caught in the middle. 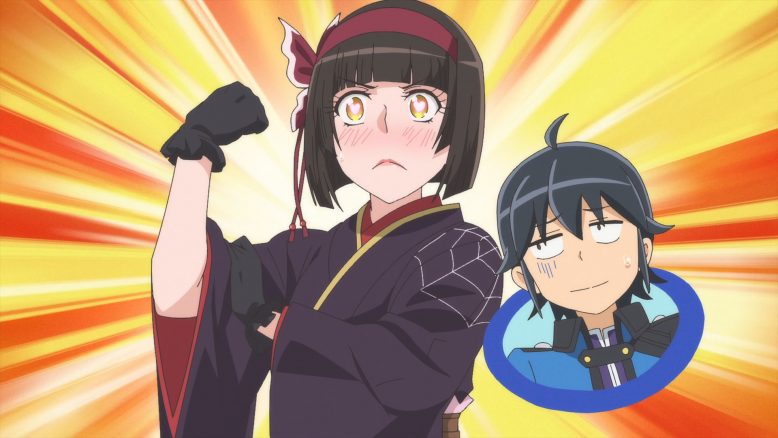 This girl is adorable

Honestly it was a really good episode for Mio and pushing things forward. She was really breaking down when it seemed like Makoto was dead or killing himself. And I think her emotional reaction helped hammer home how big a deal this all was. But beyond that you had Mio and Tomoe just having none of it with the prostitute (who may also be an adventurer) thing. They are able to handle the difficulty in getting Makoto to sleep with them. But having him respond to some random woman that passes by is just hard to endure. Not that they are entitled to anything, but it was a good time to clear the air here. And I do appreciate that it isn’t that simple for Makoto because these two have pretty well become family to him. But they aren’t his sisters. Will have to settle that eventually. 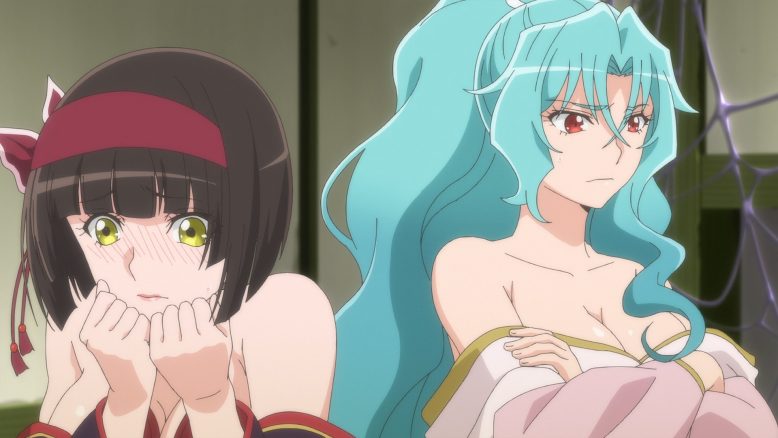 That escalated in a hurry

I just had a blast with this episode. It really moved the story along and set up some good moments. Things are a bit more awkward for Makoto with Mio and Tomoe after having their wishes really thrown at him. So that will be interesting to see unfold a bit. But for the moment I’m liking where the story is moving to. We’ve got a potential big fight coming, a complicated situation in the woods, and the potential to add to the demiplane if Mio doesn’t kill everyone!