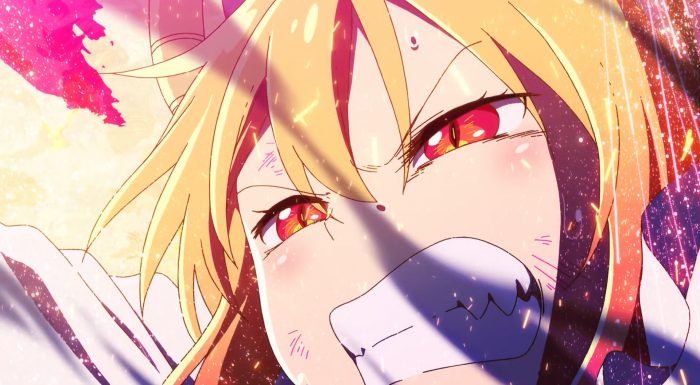 It feels good see this show return. The first season of this show was really enjoyable and just in that respect I was looking forward to this. That it is also a triumphant return for KyoAni considering all that has happened is a win as well. But, I’ll try to keep the focus on the content of this episode since it deserves to be praised on that level. The feel was a bit different from season 1, but it still really nailed the important things. The main cast was nicely introduced without an unnecessary amount of recapping. Instead we just got to see a fun little adventure for Tohru (temporarily) getting a job and then leaving it. The highlight was definitely the conflict against Ilulu who is undoubtedly going to be a major figure in this second season. Almost destroying a city is a solid way to make an impact. 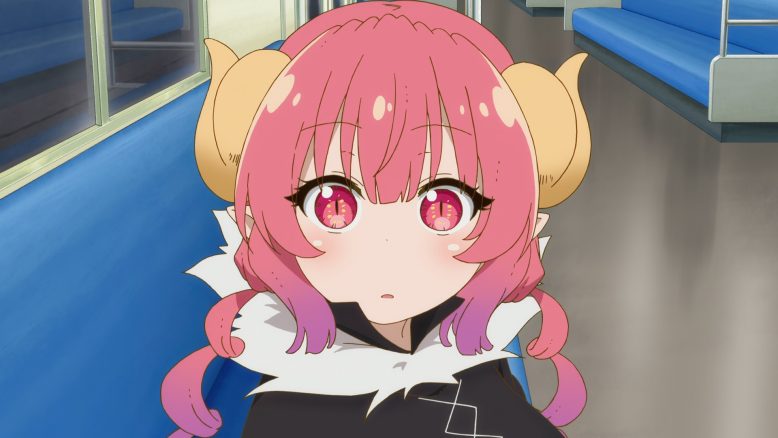 Of course if that was all she did that would be one thing. But I’d say she left the biggest mark on Kobayashi for a lot of reasons…I’d like to say I’m surprised that Tohru never thought to change Kobayashi into a guy, but I’m not. In the end Tohru loves Kobayashi exactly for who she is. She wouldn’t change those dead fish eyes, her personality, or anything else about her. I’m sure this will cause a stir, but part of me thinks it won’t change anything important. Much like getting drugged with a bit of love potion would send Kobayashi into a bit of a craze I suppose this might as well. But I sure hope Ilulu doesn’t think this will make Kobayashi make a move on her or anyone else besides Tohru.

Figures that we’ve got our second dragon that shows up presuming things between Tohru and Kobayashi is just lust related. It was the case with Kanna and in part it is the case here. Of course the circumstances are different. Kanna was just desperate to have Tohru help her go home. Ilulu just can’t accept the bond between Tohru and Kobayashi. The reason is obvious when looking at the brief shots of her flashbacks. She had a connection with some humans, it ended in tragedy, and now she’s just pissed off in general. It ended badly for her so it must always be doomed to fail. And just unleashing her destructive impulses out of a blind rage is refreshing compared to facing her pain. 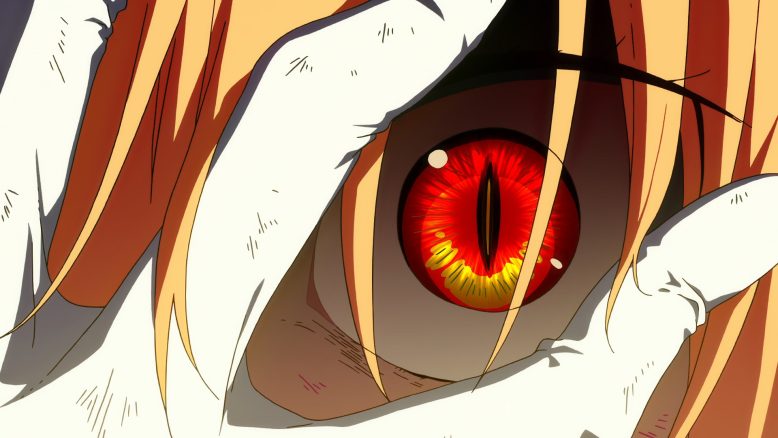 I’m starting to think Elma just underrates Tohru’s strength in order to keep herself and Tohru on the same level. Since honestly it seems like Ilulu is a great deal further behind Tohru in terms of power than Elma’s breakdown would imply. Despite throwing a lot at Tohru all she was managing to do was to anger Tohru. I suppose that would have still gotten her what she wanted in having Tohru wipe that city off the map and be forced to leave that world. But it also would have gotten Ilulu killed. She wasn’t going to win the fight before Tohru lost her patience.

And it was a close one. Tohru was getting increasingly angry. She couldn’t win the fight without going all out, but she couldn’t do that without destroying the city. It is a solid reminder that Tohru is both a dragon and on the side of chaos. It is a struggle for her to restrain herself. Still, that was a pretty awesome fight. KyoAni definitely can still bring it when it comes to these fight scenes. You get the feel of how the city was on the verge of being wrecked if not for Kobayashi’s quick thinking and Elma’s barriers. 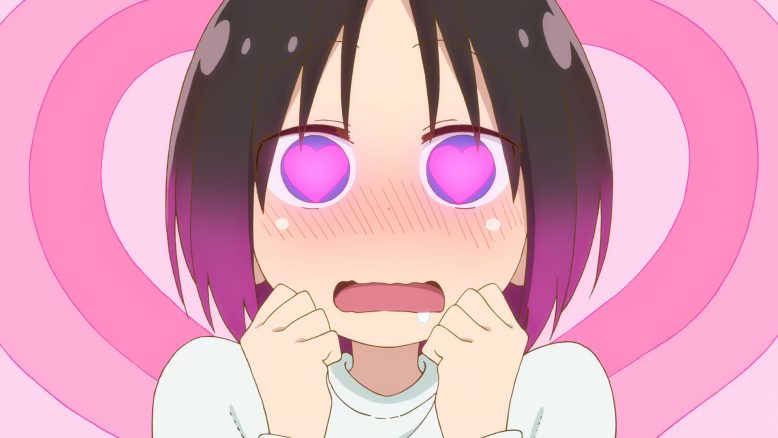 Credit to Kobayashi in this episode. Just having faith is a nice thing to say, but actually taking action helped Tohru out immensely. It was also a good reminder that just because Tohru has friends doesn’t mean she is necessarily going to be helped out whenever trouble brews up. And it is also a good reminder why others didn’t step in when Tohru’s father took her back home. The only one that would legitimately be willing to act is Kanna and she isn’t strong enough to intervene in situations like this. Tohru and Kobayashi have to be capable of defending their way of life. Otherwise it could be lost in an instant. 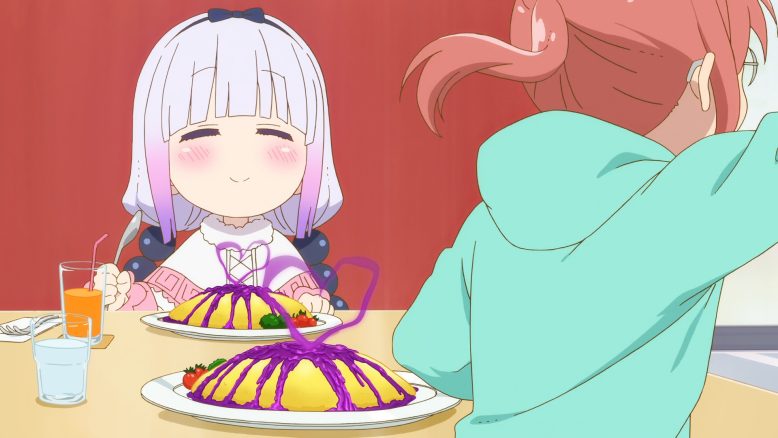 Good to have Kanna back

I don’t want to forget to acknowledge the hilarity that was the first part of this episode. Tohru working at the maid café was truly glorious. The best part was that she was such a good cook that she wasn’t going to get any acknowledgement as a maid. Of course I’m not sure that is entirely fair. Being able to cook is a strong quality and even Kobayashi acknowledged a kitchen maid as one type of maid. If Tohru is that darn good of a cook then that’s perfectly valid. Although she wasn’t going to get many props as purely a maid since she does refuse to call anyone Master. The only one she would consider calling such a thing is Kobayashi. My favorite part though was that she actually taught those girls how to cast magic. They are going to be the most successful maid café in history! 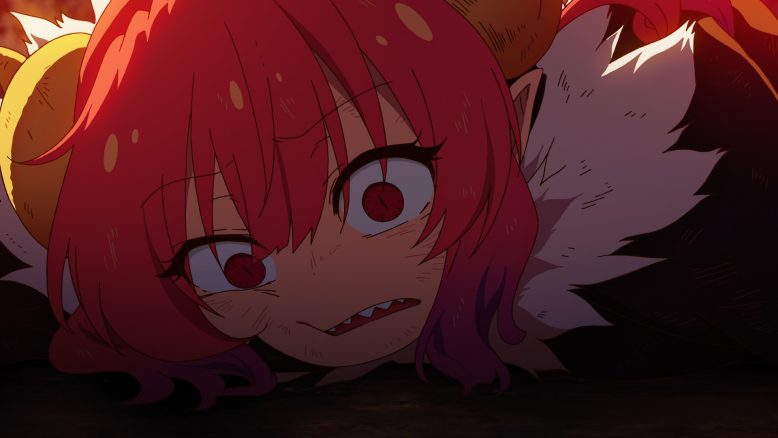 I’d say this was a pretty successful return for Tohru and company. It should be interesting to see how things settle in once Ilulu isn’t purely an antagonistic force in the story. But the immediate issue will be Kobayashi’s personal situation. She’s going to have some interesting times until either Ilulu turns her back to normal or until she can get Tohru to do it. I’m not entirely sure if I’ll end up picking this series up for the season, but it definitely is a strong contender. This episode was just a lot of fun to watch.