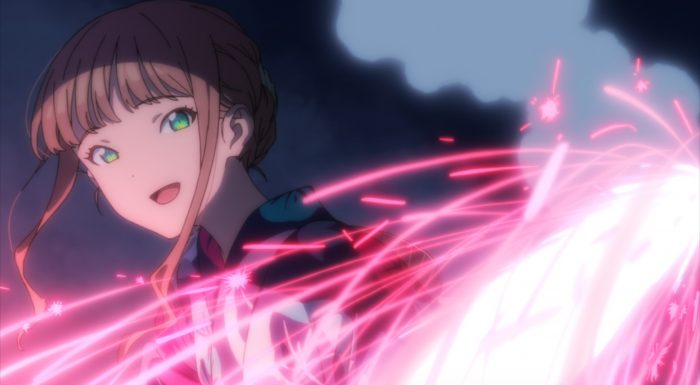 Now this was a fantastic episode. They brought Chise right into the spotlight and not necessarily in the way I might have feared. This was a great chance to push the story forward in respect to her situation and also keeping Yomogi and Yume progressing forward in a great way. Throw in a fight I really enjoyed and you have an episode that works as well as any other in the series thus far. We are heading into the latter parts of the show but it really isn’t losing what has made it so enjoyable. I’m looking forward to seeing what will happen in the remaining episodes and just where our main cast will be when all is said and done. 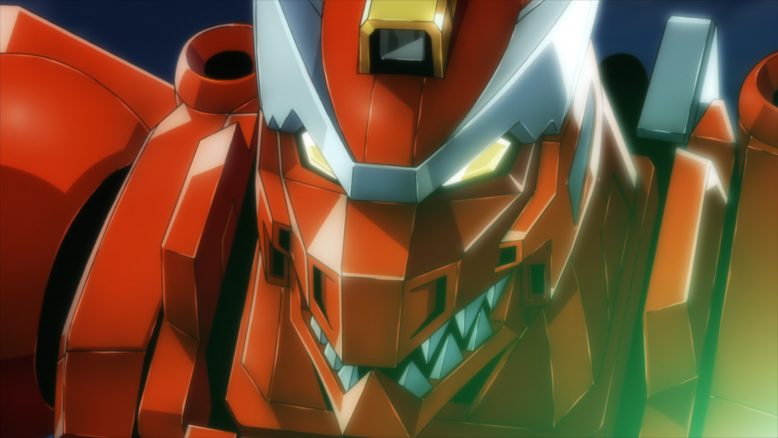 The heavy hitting moment for Yume of course came in confronting her sister’s ex-boyfriend. Unfortunately there wasn’t any additional information or clarity gained from this guy. He seems confident enough in the accident explanation. But who knows if he really believes that or if he wasn’t somehow involved. It would be understandable to want to play this as an accident if say he was involved directly in what happened to Kano…Now I wouldn’t say he’s likely to have killed his girlfriend, but it’s a possibility. Either way he’s definitely moved on as seen by that ring. The guy just leaves you a bit unsatisfied. He claims not to have known about the bullying. Although if his girlfriend was being bullied you’d think he’d care a bit more about that. Then he leaves with a line about you normally expecting a boyfriend to help his girlfriend when in trouble. That’s interesting…

Of course Yume was thrown off by all this. She had to face a lot of difficulty just to get this meeting and she still doesn’t really know what happened to her sister. Did she commit suicide? Did she die in an accident? All her struggles and she feels as lost as she was at the start of all this. So it’s not shock that she retreated back into herself a bit and struggled to pull together the strength to go and fight. Even if she did force herself it probably wouldn’t have gone well. We already saw how Dynazenon struggles when the team isn’t synced up properly. But her not going at all would of course lead to issues against an enemy that can mess with the ground. 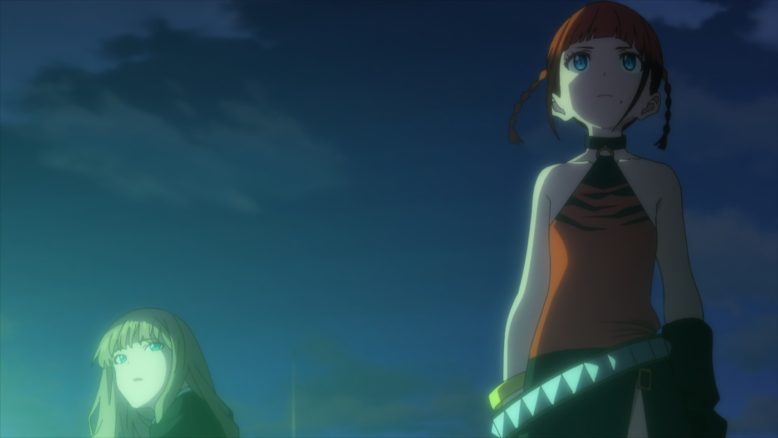 Some strong moments this week

Having Chise confront Yume definitely worked. She is someone who has felt very on the edge this whole time and hasn’t exactly felt part of the team. A temporary fighter that only occasionally gets to do something. So Yume’s rejection hit her harder than it would others and forced and outburst that shook Yume in turn. It was good on her to actually throw some things at Yume who was focused too much on her own losses. Understandable as that is. It was good for Chise to remind Yume that she has actually gained a lot through this show. She has more friends, she has some answers, and yeah she also has Yomogi. Someone that charged into danger (after Gauma shot him) to save her. If nothing else Yume has gained someone that cares about her that much and she shouldn’t disregard that to only focus on her loss.

The end of the episode helped quite a bit in respect to wrapping that up. Yume accepting things a bit more as reflected by her racing off to get into that yukata. Something done for far more than just being able to enjoy the fireworks XD. She understands Yomogi’s feelings more now and is more open about accepting them. They aren’t at the stage of any open confessions, but they are in a pretty good spot. This episode was hard on them, but it helped them get quite a bit closer. 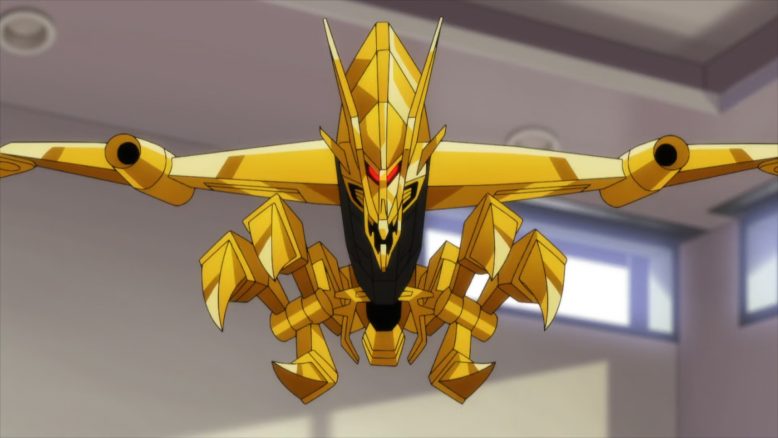 I love how Goldburn turned out. It seemed entirely likely that he’d be a major threat from the start and the cast would have to deal with him. Instead he’s a far more interesting existence than that. He’s very much an extension of Chise’s emotions and feelings. He responds to how she feels and not necessarily her conscious thoughts. When she felt frustration towards her school he was ready to dive towards it. And when Yume was falling it was that intense concern that lead to Goldburn saving her. Doing that instead of taking a combative stance against Yomogi which would have been a natural development since he did tackle the kaiju. It also reflects in how Goldburn acts like a support asset for the team. Not doing a whole lot of damage himself (though that shrink/enlarge beam is cool). But he does combine into a very awesome unit.

The interesting thing is that Goldburn can resist being controlled. That does make some sense of course since he’s very tightly tied to Chise’s emotions. The only risk I can see is that he will absolutely act on her emotions. If she loses her cool and gets angry he might hurt the people she’s angry with. And as we saw from her flashback Chise does have frustrations. She wasn’t hurting herself, but she was apparently giving herself tattoos which I can see in Japan not quite being considered appropriate. It doesn’t seem as if she was being bullied directly, but she may have been ignored and isolated by her class. Hopefully she can overcome some of this stuff and leave this series happier than she started. 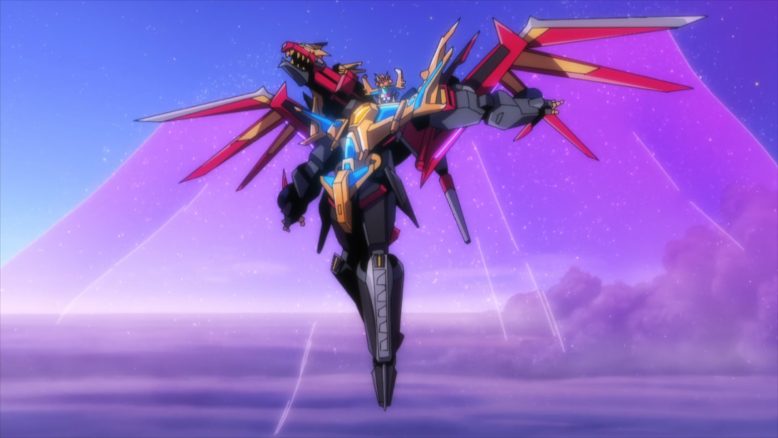 No complaints about the action here. The fight was tricky for the cast early on since it was against targets that need to have solid footing. With Yume gone they lost their aerial advantage. With her back they would have been fine anyways. But it was truly awesome seeing the combination into…Super Dragon King Kaiser Gridknight! Wow that’s a name. But to be fair it definitely put up a display that was more than worthy of it. Such a satisfying finish. No doubt they are pretty close to their fighting peak right now. I could see them gaining a crazier final form in the last episode, but that’s about it. Unless the enemy can either weaken the team or throw a four-person controlled kaiju at them they aren’t going to have a chance. Gauma is right that they need everyone. Everyone there is necessary and that includes Chise. 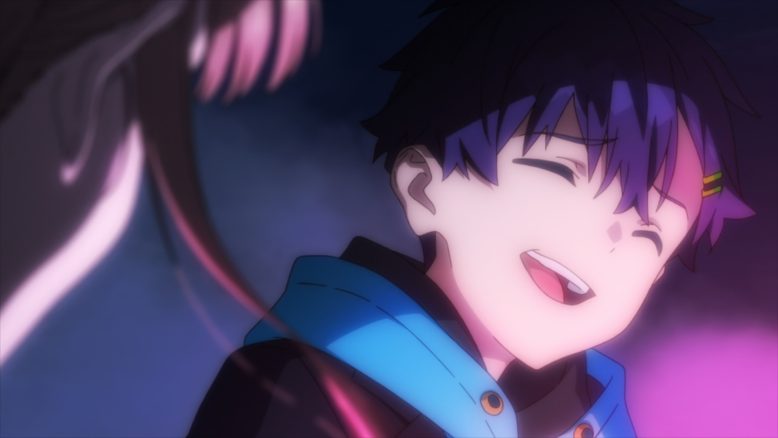 This was a whole lot of fun. Dynazenon is so reliable each week. It is easily the show I look forward to the most. I can’t wait to see where things go from here. They are likely to get even crazier and probably more intense as we head towards the climax. But I’m all in for that.