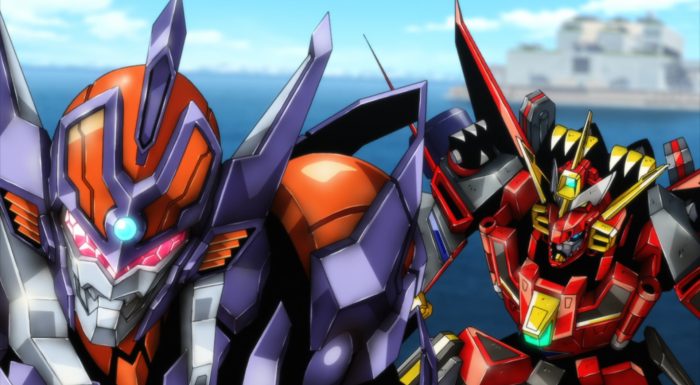 While events played out largely as you would expect that still made for a strong episode. The main cast may have fallen out of alignment the previous episode, but this time they pulled themselves together and overcame one of their most challenging encounters yet. While they did gain a very powerful ally in Gridknight that doesn’t mean that things are going to be a cakewalk from here on out. If the kaiju are growing stronger in response to what they are up against then throwing someone like Gridknight into the picture might only escalate the threat level. But the main cast are up against a dangerous group regardless so having an ally should give them more options when fighting. 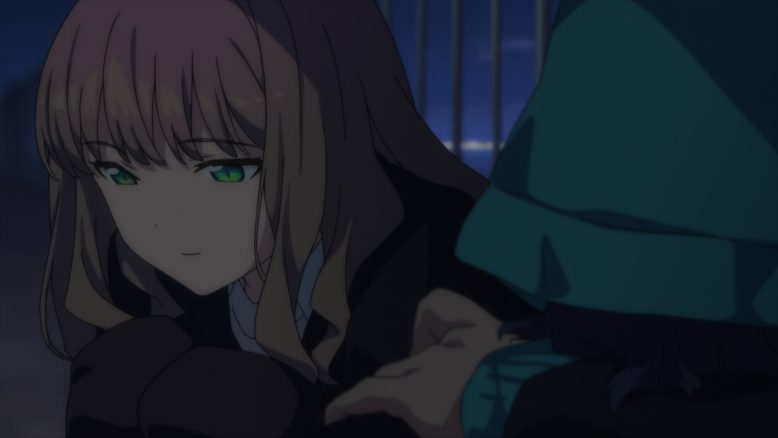 The core of it for me was Yomogi and Yume restoring their relationship back to normal. Not that they were outright fighting, but there was a gap between them. Mostly it was Yume throwing up a wall for a variety of reasons. They never really did delve into why she was keeping him at a distance, but maybe they didn’t have to. The important thing was her opening up. Finally she’s delved a bit into what she thinks about her sister. Yume just doesn’t know what to think at this point. There’s a gap between the sister she thought she knew and the one she’s hearing about. And things really changed between them while Yume doesn’t know why. I’m sure as they continue to dig they’ll understand better. And Yomogi’s tears did help here. Helped Yume laugh and appreciate that someone else cares this much about something important to her. 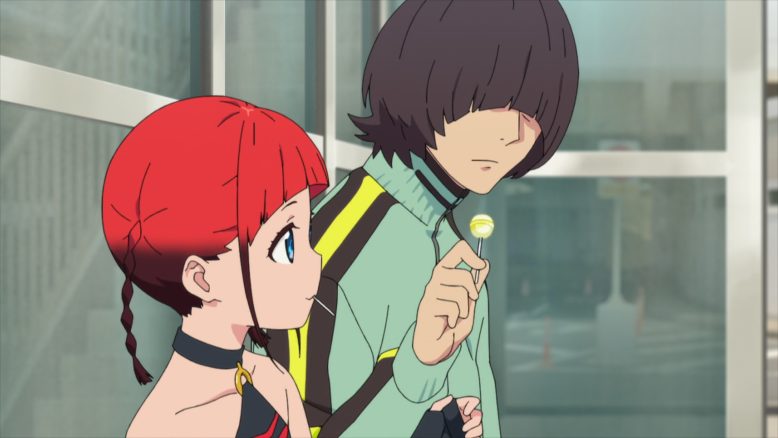 Koyomi had a tough time in this one. Good on him for stepping up to help out Arata. He probably would have been ok even if he didn’t step in since rescuers were going through the area. But, at the same time he might not have been. Easy to save people you like or at least people you don’t know that well. But saving someone you honestly don’t like at all is a bit of a hurdle. This situation just brought those two closer together and closed whatever possibilities existed for Koyomi. Though perhaps there wasn’t that much hope either way. Things aren’t looking great either when it comes to Mugina since she’s really gotten invested in the whole killing mission. But hey, at least he’s still got Chise!

Speaking of Chise, I’m curious to see when things will take a turn with her. She’s seeing characters bonding while she herself feels a bit left out. She did have to find the team herself and wasn’t exactly called upon to join them. They seem to be hinting at a lot going on with her including probable bullying. And she’s still got that thing she picked up in episode 1. She’s going to get wrapped up in something dangerous and the cast will have to deal with it. I’m curious to see how Chise’s story continues to unfold. It doesn’t feel like she’s in the worst spot though when at the end she is sharing candy with Koyomi. 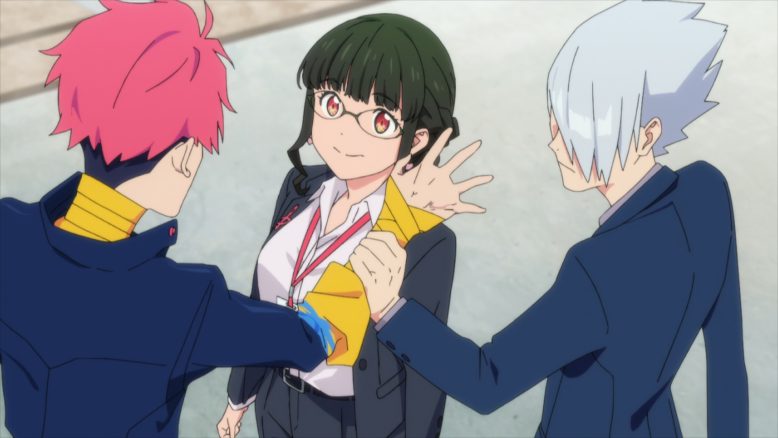 Good to see Anti. Wow, he’s really aged up. I didn’t even recognize Second at the start. I’m not sure if they have accelerated aging or if it really has been that many years since the events of Gridman. No telling since they are effectively dimension hopping here. And it is totally Anti to attack Dynazenon himself when the kaiju retreated. Admittedly he didn’t really know what was up with them either and just treated it like two kaiju clashing in the city. He still has that time limit to consider, but it’s not the worst thing either. The fights in this show aren’t exactly marathons so he should be plenty effective. Good on them to share that fixing device since Dynazenon would have been near useless going forward with a busted leg. They could have just used combinations without Gauma’s unit, but that wouldn’t be great long term. 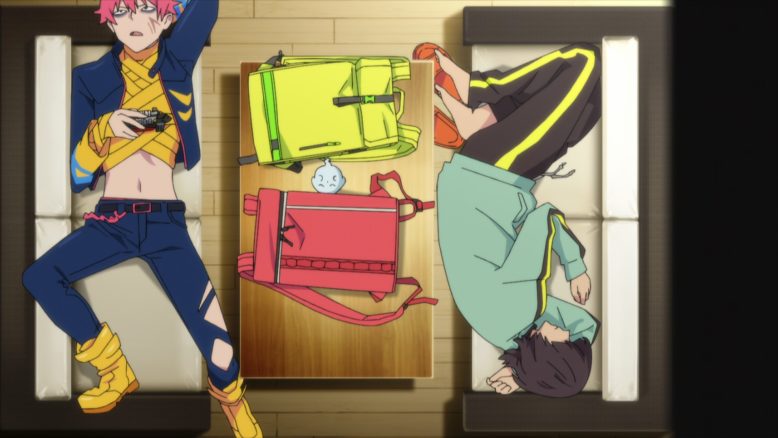 It was kind of nice to have Gauma and Koyomi bond a bit. Those two haven’t interacted a lot, but they could relate a bit. Gauma was down on himself since he let Dynazenon get damaged and it was entrusted to him by someone he cared about. I’m increasingly curious about this woman since she was some important person that was out of his league in some sense. I hope if she is still alive that he gets to meet her again. But for the time being he should just be glad that Dynazenon got fixed. Maybe he should also be glad that Gridknight didn’t kill him for casually laying a hand on Second… 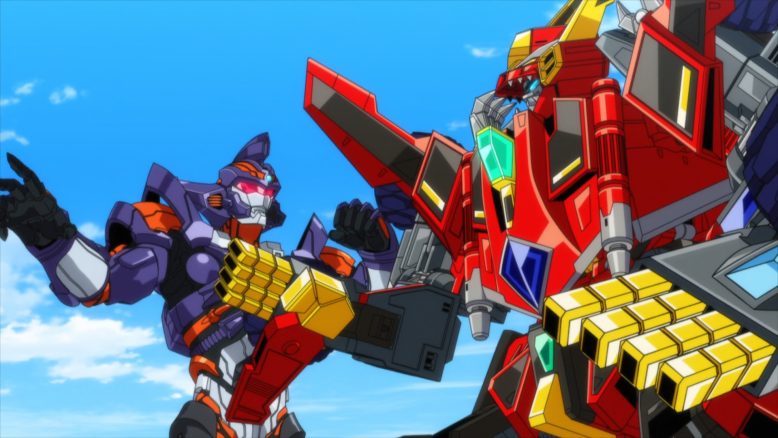 This was just another great episode. I loved the combo action between Dynazenon and Gridknight. They made for a good team. Even managed to fit a “something beam” attack into this which I loved. Certainly the enemies are looking more dangerous with Onija casually throwing out the idea that kaiju exist for massacring humanity as a whole. Also I love his utter nonsense of saying kaiju aren’t there to settle personal scores when he’s done nothing but use them to try and settle personal scores…I can’t wait to see how things will unfold now that we’re heading into the second half. Gridknight will shake up the status quo and the action should escalate.