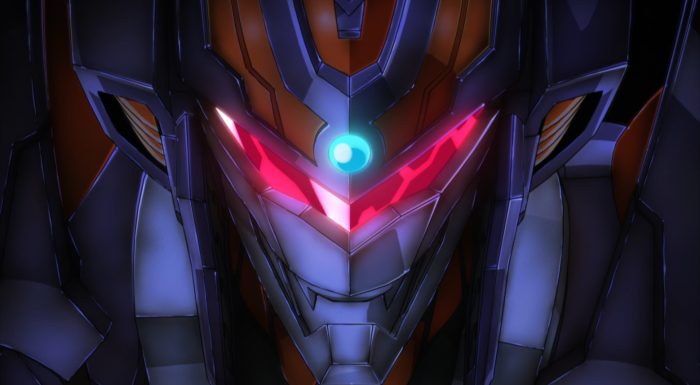 Dynazenon had a lot of interesting elements at play in this episode. Most of the main characters had their personal arcs furthered this week. And the impact of those issues dragging them down was reflected in the tough time they had in the fight of the week. The first one that they are set to lose before getting saved by the very timely rescue from Gridknight. The first big crossover character between Dynazenon and Gridman. I’m sure Gridman himself will appear to help out at a later point in the series. But it was a nice move to have Anti show up again. He didn’t get any lines yet, but with him there this situation could be stabilized. 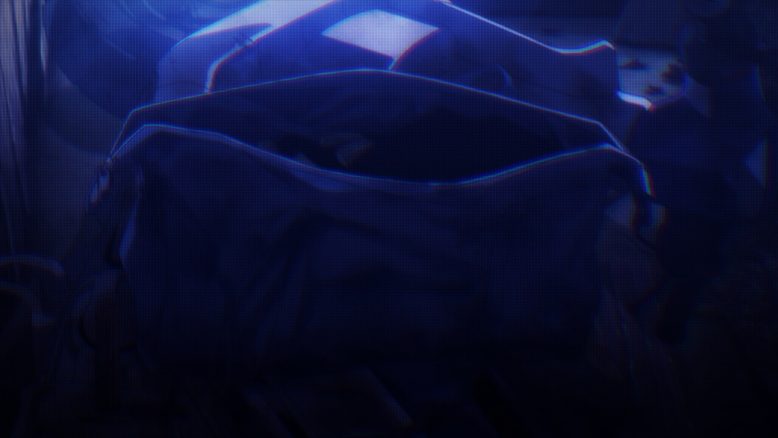 I’d accept guesses on this one

Koyomi was probably the star of this one in terms of his plot really being pushed forward. There’s a fair amount going on with him. The flashback to the past was both interesting and yet still a mystery. He saw a case of vandalism and then was shown something in secret. Then he got uncomfortable and ran away from the whole thing. I’m not entirely sure if that means he just kept running his whole life until he got to this point in time, but that’s probably where this is going. What I’m curious about is what was up with that bag? It was hard to make anything out. But maybe it was that dragon shape we saw at the end of the OP. And that was almost certainly Dynazenon before it turned into a mech. So did Koyomi have a connection to Dynazenon from the start? 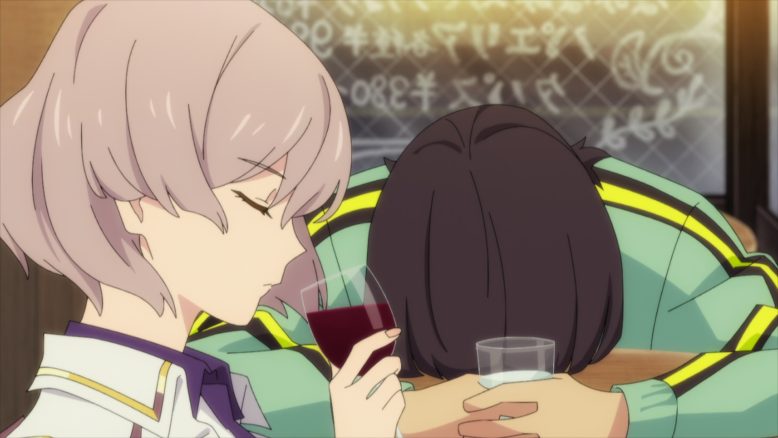 Didn’t expect to see these two together

Beyond the flashback Koyomi had a lot going on with his multiple drinking dates XD. Of course his original meeting with Yomogi’s boss was interesting since it was eventually crashed by her husband. And that itself was weird. She just had her husband swing by since he was nearby while she was out drinking with an old classmate? Ok, that’s a bit weird. But maybe what was most weird was that nothing too extreme happened. Well besides the husband being unable to get Koyomi’s name right. I’m not sure if he was doing that intentionally or if he was just being dumb.

Then came his drinking date with Mujina. I kind of salute his drunk state for thinking she might eat him XD. Someone needs to consider this group a threat! Strangely they kind of hit it off. Neither of them are that driven and are somewhat dragged along by their teammates. That makes the later part of the episode all the more interesting when they run into conflict. She takes Dyna Striker on a whim and didn’t really have any strong feelings about it. At least not until Koyomi raced in like a lunatic and tackled her! Honestly her kicking him off of her was probably the most motivated she’d been in the show. I’m not sure if that built up to her getting hyped up to fight later in the episode or just being manipulated but it was interesting to see that shift in her. 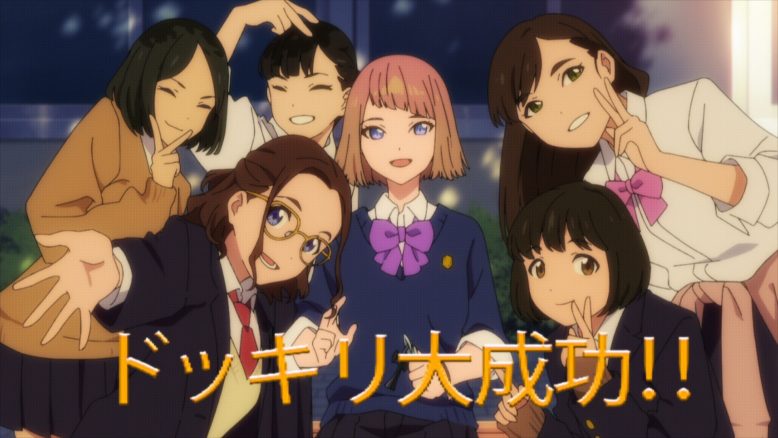 Sure, just a friendly prank

Then you have Yume and Yomogi running into some difficulties. Yume being hit with a lot in a short amount of time. She at least is exposed to the idea that her sister may have killed herself and may have been bullied in short order. I salute her intent to try and find out the truth and learn about her sister. But it did appear to hurt her as she was warned about. Sometimes the truth isn’t something comforting. Then came the video she saw. It was somewhat grey, but I definitely considered it bullying. This was the best look at Yume’s sister that we’d gotten thus far and it was painful to watch. She ended up dating someone and their popularity lead to her getting bullied as a result. The edits easily could have been disguising Kano crying over her possession being taken and found outside like that.

Yomogi might have been a bit off in general after another uncomfortable trip with his mother to spend time with the guy she’s dating. But I think most of the issue came from Yume. There’s a few possibilities. She may have simply just been upset over what she saw in that video and pushed Yomogi away. But I think she’d been enjoying his company lately so I’m not sure on that one. I think she may have seen potential similarities between her and her sister. That if she was too close to Yomogi she might be bullied or harassed by his female friends. Yomogi is probably more popular than he realizes and Yume could potentially take heat being the girl he’s closest to. Also a subtle motion there by the one girl to block Yume’s view of Yomogi, but that could have been coincidental. 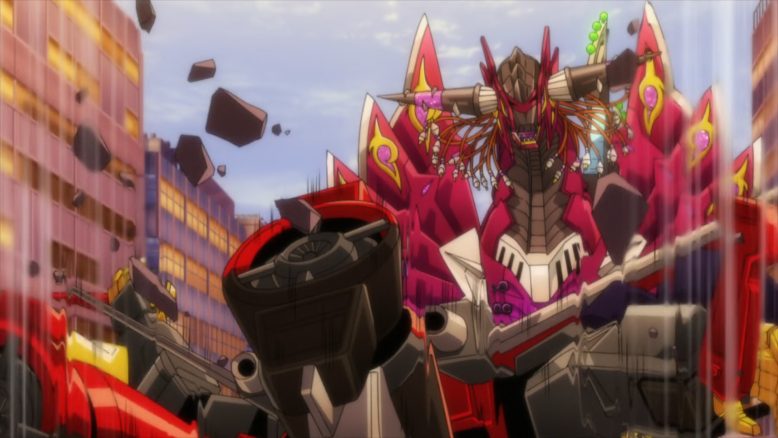 This one was a beast

No wonder with all of that stuff going on that the action didn’t work well. The team wasn’t on the same page in their feelings or their coordination. Now it isn’t as if the team just didn’t like each other or were openly fighting. But rather their personal baggage was throwing them off. They understood that while fighting and how that wasn’t a good thing. But it is hard to just flip the switch and put away complicated feelings. It didn’t help that this was easily the strongest kaiju so far. One that was being controlled by two people at once. They had a tough fight and weren’t at their best. And things looked downright bad if they hadn’t been saved at the end of the episode.

Not much to say about Gridknight that wasn’t said in the intro. His appearance was very timely, but I’m not sure if he’ll outright join the cast or not. We’ll just have to see how this plays out. Honestly the conflict within the Kaiju users was more interesting. They all have their own views and maybe that lack of cohesion has helped Dynazenon handle them thus far. Mujina up to this point has been very apathetic to taking action. Juuga wants to negotiate when possible. Onija is just angry and wants to rampage. Shizumu is the most dangerous I feel. The guy has the feel of someone who is able to manipulate those around him and is the most dedicated to the kaiju themselves. If anyone in this group has last boss qualities it is him. 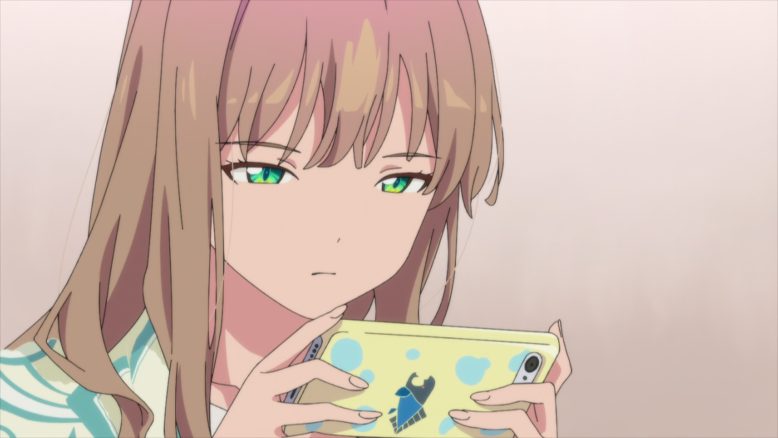 Curious to see how her story plays out

This was really a strong episode. The characters have reached a difficult point in their character journeys and I can’t wait to see them play out from here. The game is also changing a bit with Gridknight showing up. The role he will play in the coming episodes remains to be seen. But I remain really engaged with this show and where it is going. I’m mostly interested in seeing the storyline around Yume continue to develop, but I’m looking forward to more from the other characters too. Koyomi has a good arc going and Chise is bound to play a bigger role in the second half of this show.