Mashiro no Oto – A Beautiful Beginning 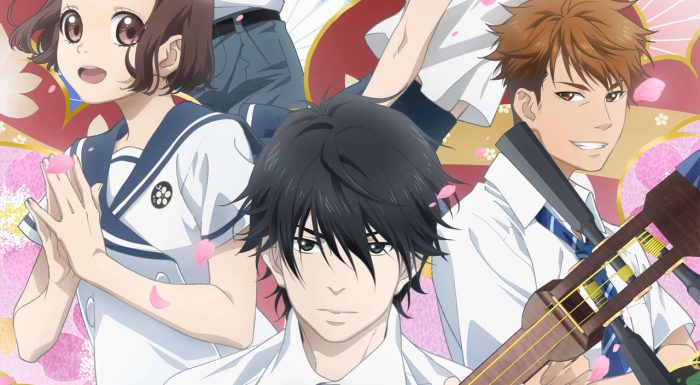 They often say that nostalgia is one of the core fuels of music, powering its ability to resonate with people. Who “they” are and what the heart and soul of music is, is honestly not that important, at least for me, today. I’m not a musically inclined person, nor do I pretend to suggest that I could even describe music and how it affects the human soul in a succinct or interesting way. Yet, the thing that I want to highlight today, is a show that I think really explains the power of music, of tradition and of how music can really awaken something deep within people.

The thing in question, a show I want to get you to watch and potentially enjoy with me, is Mashiro no Oto. A show, that I believe, is the hidden gem and sleeper hit of the season that most people will unfortunately miss out on or gloss over.

I say that, because I too, almost missed out on this show. Anime as a whole this season has been kind of a downer for me, what with my two most anticipated shows (Edens Zero and Shaman King) both being in Netflix jail, and nothing else really resonating with me that much. Its hard to really talk about anime these days, when nothing exactly moves or excites me. 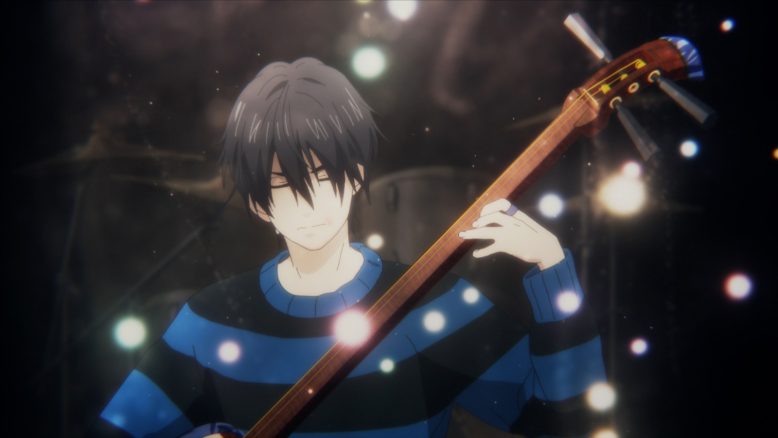 Its also worth noting that I’m just going through a very odd time in my life, having just come out of a rather tough start to the year, and now kind of trying to settle into a new normal within a pandemic. I’m sure a lot of people can relate to that, so I doubt I’m alone here. To that end, Its in moments like these, in our lives, that I think, it becomes quite difficult to find the time or energy to just watch or engage with something medicore or “decent”.

Rough times, odd times, they call for things that will distract us, uplift us and give us superb experiences. And I will say this, despite appearances, Mashiro no Oto is superb. Its like Shouwa Genroku Rakugo Shinjuu or Welcome to the Ballroom or NANA or Fune wa Amu, a show that just resonates with you on such a level that its hard not to be emotionally moved and just be dragged into it. Mashiro no Oto, as of the four episodes that have aired so far, is a show for those of us who love great storytelling and want to experience something new, different and emotionally powerful. 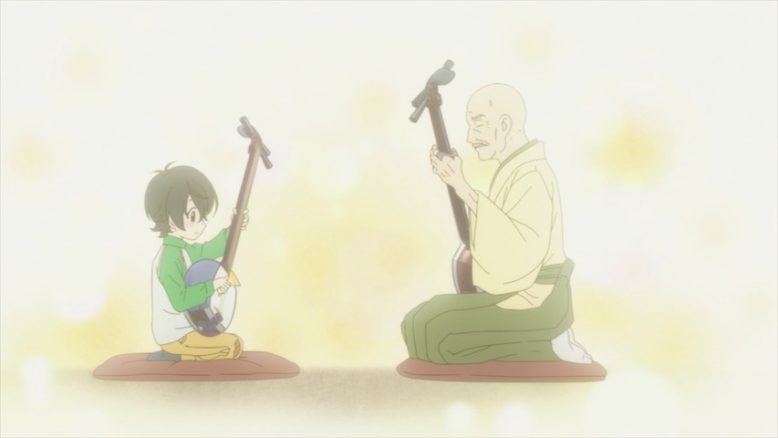 The tragedy, of course, like I mentioned earlier, is that I don’t see many people actually giving this show a shot. Mashiro no Oto doesn’t make much of an impact with its core premise after all. Its a show about a high school kid playing the Shamisen (A traditional Japanese musical string instrument). And given the quality of anime series that tackle the topic of music, in the last few years, Its easy to see why most people would give another one of those, a pass. Music, taken on its own, can certainly be appreciated, but only by those who really are already “into” appreciating it.

Much like how Welcome to the Ballroom makes someone not familiar with Ballroom dancing really appreciate the unique world and subculture of that particular activity, so too can show do the same thing for the music played on a Shamisen, or so the theory goes.

The secret sauce, of course, is connecting the music to an engaging human story. Yes Mashiro no Oto is about a high school kid playing a musical instrument, but its also a story about a loving grandson trying to find his place in the world after losing the musical genius that inspired him; his grandfather. Its as much about him and in his life, is it is about the culture and the world of the Shamisen player. That duality, that appreciation for not only the thing, but the people that appreciate, love and push that thing forward? That’s what makes shows like Mashiro no Oto, special. 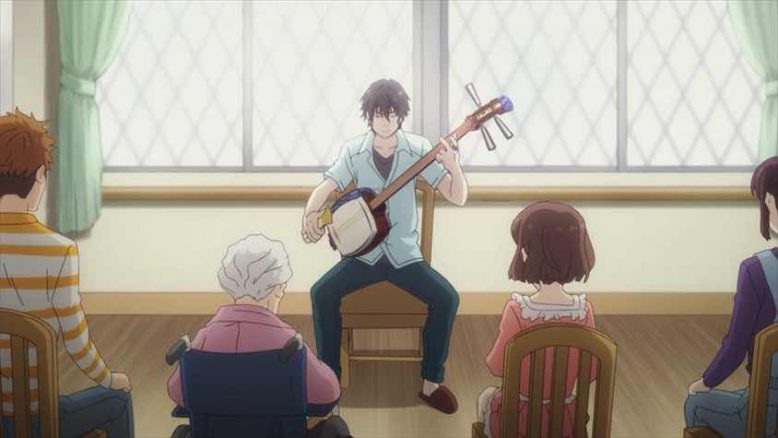 And I do often wonder, how shows like this one make communicating all that so easy, when its one of the most difficult things to capture, in a story. I think its something that only Japanese storytellers are able to do, this well. Japan, is unique in that the culture really emphasizes, respects and supports the idea of craftsmanship and mastery. There can be a real appreciation, sense of respect and reverence for things that most people in western society would find “dull, traditional or old”.

What’s even more amazing to me, is that Mashiro no Oto not only shows us an entire world of not only aspiring and talented Shamisen players, but that it so lovingly depicts an audience that actively supports and hungers for this particular genre of music. It really is, an exploration and a window, into a different and exciting new perspective, something that really elevates the anime medium.

Too often, we see shows trying to either setup a larger story, trying to cram as much as possible into a limited episode count or just ruin the pacing of an otherwise potentially powerful story. We saw it with some of the best shows last season, and its something that I think is really hurting the Anime industry as a whole. 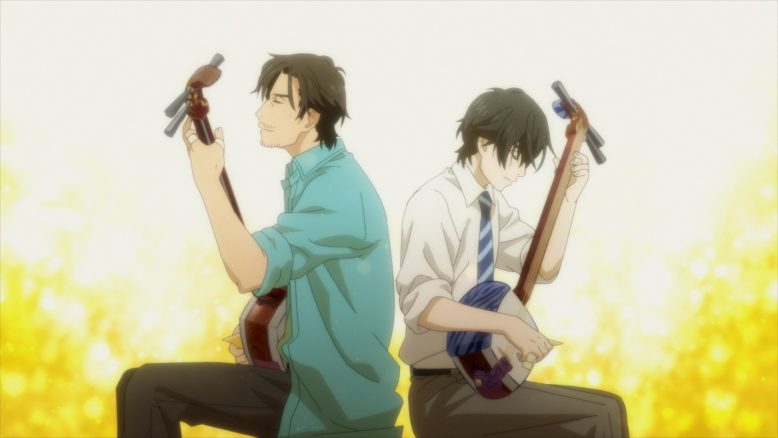 So to see a show, just really nail the idea of telling a cohesive, well paced story, unencumbered by whatever its source material is or isn’t, and just focus on wowing its audience, well… Its something that we just don’t get to see enough of, these days. There’s even a part of me that wonders if I want to continue with this show, as these first four episodes tell a solid enough story, that well, it feels complete in a way.

Now, for sure, It isn’t of course, and I think what’s so exciting about Mashiro no Oto, is that it sets up enough intriguing pieces WHILE telling this cohesive story of its protagonist Sawamura Setsu coming out of his shell and finding himself, in just four episodes. The coming of age story, is done, and there’s a lot more to be had here.

The show opens up with Setsu really kind of struggling after losing someone dear to him (his grandfather, his inspiration) and then trying to find out what to do with his life following that. What happens next, is I think, one of the most riveting and interesting opening story arcs I’ve seen in a while. By the end of episode 4, Setsu has already changed and gone through a character arc, while meeting a bunch of people that will undoubtedly play a huge role in the next chapter of his life. There’s his new life in Tokyo, there’s a band of friends there, a rekindling with family, a new rival, and ultimately, an entire world of professional and competitive Shamisen play ripe for exploration. 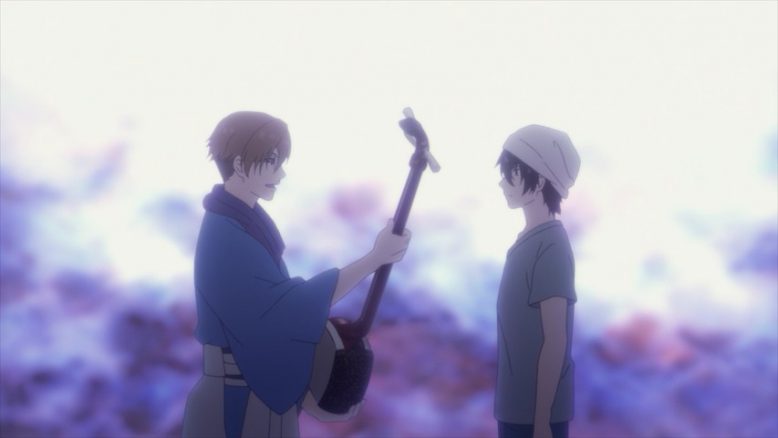 I truly believe that good shows need only an episode to really sell you on themselves, and I’d say if you’re curious about Mashiro no Oto, then just watch the first episode. Give it a look, watch it till the end, and I think you’ll find yourself going through all the available episodes, before hungering for more. It may be a bit of a slow season for some of us, but if shows like Mashiro no Oto are around, then I think I have something to be excited about.

I probably won’t be blogging about this one weekly, if only because I just think this is a show I want to experience without the worry of sticking to a regular writing schedule. That said, its also been a while since I’ve watched a show and immediately wanted to gush about it. 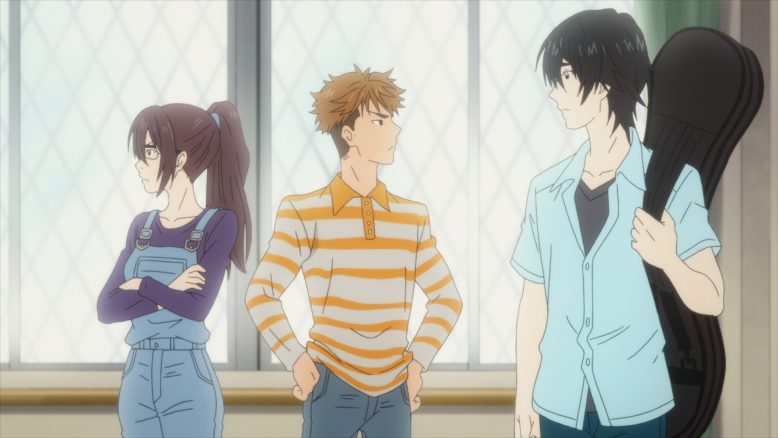 Mashiro no Oto is a gem I found (thanks in a large part to YouTuber Gigguk giving it a shoutout in his latest Anime Season Video), and its a show that really struck a chord with me. I’m not watching much this season, but I did want to do my part to recommend this show to anyone who may end up reading this.

To cap it off, I’ll say that I’m always open to feedback, so if there’s people that would like me to cover this show weekly, I can certainly be swayed in the comments section, as always. And of course, I’d love to hear your thoughts on this show if you ended up watching it. Have a great Spring 2021, stay safe, and if nothing else, I’ll check in with another post on this series in a couple of weeks.