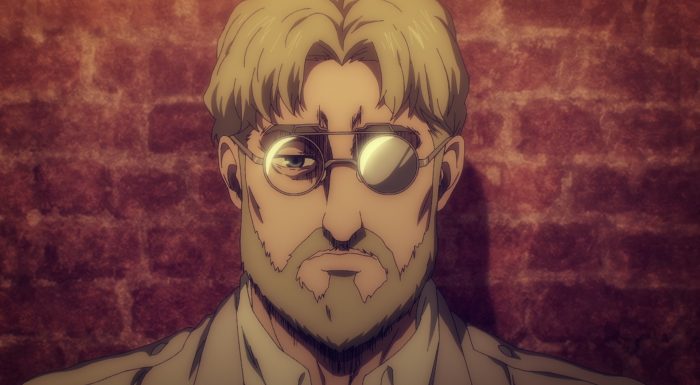 Plot twists, pivots and deconstruction, with a heavy dose of nihilism to boot, its quite the different look for Shingeki no Kyojin. As we reach the so called end of what I assume is only part 1 of the “Final Season”, things are murkier, muddier and as confusing as ever. Getting a handle on what this show is trying to do, what its trying to say or even what its going for is probably one of the biggest challenges of 2021. At this point, if you’ve made it this far, then you’re in it to the end, and Shingeki no Kyojin, Isayama-sensei, MAPPA and the Production committee behind this project know that.

The first episode, 14, is perhaps the most interesting of the two to me (I’m not sure if I like or dislike anything at this point). Here we have the long awaited “talk” between Eren and his two friends, and its also here, where the kid gloves come off. I mean that not just for Eren, but for Isayama-sensei as well. In essence, this is where the deconstruction of everything that we as the audience know about this show begins.

Eren, Misaka and Armin have been a trio that were more or less the emotional core of the first three seasons. Sure, you could find both Eren and Mikasa annoying, but the way the two of them cared for each other and Armin? That was touching and it made some rather flawed characters, somewhat endearing. There was context towards what drove Eren, Mikasa and even Armin at any one point. They wanted to survive, and what they wanted to protect each other while doing it.

Yet, as Eren reveals what he knows about them and himself, well, all of that gets shattered in an instant. Mikasa is a slave to her Ackerman bloodline, and Armin has slowly become a slave to the very memories that he’s absorbed since gaining his Titan powers. The so called bond that these characters believed in? It was artificial, manufactured and fake.

And to add insult to injury, Eren reveals that he detests his two childhood friends, who could never think or act for themselves. I’ve always wondered why Eren seemed to exclude Mikasa and Armin from his whole “Why doesn’t humanity think for themselves” schtick, but its clear here that he never did. He always hated these two, or at least some part of him did.

In a way, its Eren finally realizing what he values in life, and tossing aside things that he feels were never that precious to begin with. Its a really tough scene to see as the audience, because some of us (as in myself), were thinking that Eren was doing what he was doing to protect Armin and Mikasa.

Yet, in this scene, as Eren so accurately proves to Armin and Mikasa in mere moments, all of that is more or less null and void. The implication here is clear, from Isayama-sensei, and its that any idea of promise to his audience of Eren doing this for the right reasons, is gone. This is the new setup for the story, the new direction, and its one where Eren gives a damn about absolutely nothing or no one. Eren is charting his own path, free of any of the narrative build up or connections from the last few seasons.

And that’s very interesting to me, because while it definitely spits in the face of everything I liked in the past three seasons, its a different and unique direction none the less. Look, I’ll be dead honest here… Shingeki no Kyojin peaked for me when the show revealed the whole truth behind the Titans and the basement. In a sense, the show that I loved and enjoyed wrapped up there and then, and everything that we’ve gotten since is just a weird new story to me.

Incidentally, it seems like Isayama-sensei is kind of on the same wavelength as I am here, or at least, his intent seems to be that way. It feels like Isayama-sensei, from this whole final arc is saying something quite directly to his audience. Something, that I think, I finally got this week, as Eren just tore down the last few pieces of what made him who he was before. The directive is something like this:

Isayama-sensei fulfilled the promises he made at the beginning of this story, namely the ones regarding the Titans, the world of this story, and Eren and his whole deal with his dad. All of that has more or less been delivered upon, so now, what comes next, is whatever the hell Isayama-sensei wants it to be. Its almost like a “I gave you what you wanted, not stick with me for what I want to say”.

And I get that, after all the mysteries that were setup in the beginning of the series are done, its fair to say that Shingeki no Kyojin can go anywhere. Its Isayama-sensei’s story, its his characters, and if he wants to burn it all to the ground in service of some grand point, then he can do so.

I’m onboard with that, but what I want, is that whatever he does, be entertaining and interesting. The Eren turning full on villain? Sure, lets go with that. Armin and Mikasa being slaves to things beyond their control? Okay. The world being a dark place where very few humans are free to make their choices free from the influence of society and those around them? Alrighty.

I’m onboard for all of that, but what I’m not onboard for, is where all of those interesting twists and pivots lead to; Zeke’s Euthanization plan. The nihilism that pervades through Zeke’s full backstory, his goals and his plan? Man they just reek of such depressive garbage that I’m not sure I really want to partake here. The idea that some character hates himself, his life, his entire race so much because of how twisted and broken both his society and family were and are, is just a weird thing to dedicate your final arc to.

There’s nothing poetic or interesting about the whole second episode (15) where we get to see Zeke’s life story, again. Most of the stuff here is information we got in a much better way in Season 3, but the new stuff is what really feels like Isayama-sensei might be going a touch too far in the depressive route.

Do I believe that Eren is onboard with Zeke’s plan one hundred percent? No. There’s a chance Eren could be though, and if the series is expressing Eren’s big “choice” as a “choice on how to die and kill his entire race” then well… That’s messed up.

And look, I’ve somewhat versed in Japanese history, and there’s that whole angle of Senpakku and Harakiri in there, where often the biggest warriors in the Sengoku era would ultimately express their freedom of choice by killing themselves on their own terms. I get that, but I also dislike that idea immensely, and its not exactly something that entertains me.

Zeke was such an interesting and conniving character. His whole plan was so clever, but his end goal is so darn disappointing. I was almost glad when he decided to just blow himself up, surprising both Levi and throwing his own plan into the gutter. It also, incidentally, made the entire point of the whole episode, kind of moot.

If this was Zeke’s big death scene (and it certainly felt like it was), then this episode was a big waste of time. If it was’t, well… Then I’m not entirely sure what we’re heading towards.

To me, the more interesting idea is that Zeke is one and done at this point, giving his ambitions. With Marley about to rain down on Paradisio, and Zeke out of the picture, where does that leave Eren and his whole “Fight back” plan?

How does Eren adapt, where does the story go from here? I will say that I’m equal parts curious and disturbed by what we got this week. The nihilism is starting to wear me down a bit, and the fact there just doesn’t seem to be any character that I can latch onto as a “protagonist” is also an issue.

If Eren has made the transition to antagonist, then who goes on to face off against him? Is it Reiner? The guy who was always the antagonist for the series until now? Is that Eren’s plan? To have Reiner become a hero and basically play a role as a villain himself? It would put things like his whole sparing of Reiner into context.

Or is all of this just me ascribing more meaning to what is essentially a “burn it all down” conclusion to a popular franchise. I’m not sure, and I honestly don’t think we’ll know until its all said and done. With one more episode left, the more immediate question for me is; where do we leave this anime series before it goes on break?

Its a question that may make or break this series honestly. Its no secret that the production values, direction, pacing and nearly every other aspect of Shingeki no Kyojin have taken a nose dive. The people funding this know very well that Shingeki fans are going to watch the “Final” part of the story, so its clear that we’ve gotten huge cuts to the budget and production of the story.

Scenes like Levi’s massacre of his own squad, are done entirely off screen, for instance. And its in a situation like this, that I think this final season is going to wrap up, leaving fans both scratching their heads and wondering how this will all end. Is that a win for this show as a whole? I’d say so, even begrudgingly so,.