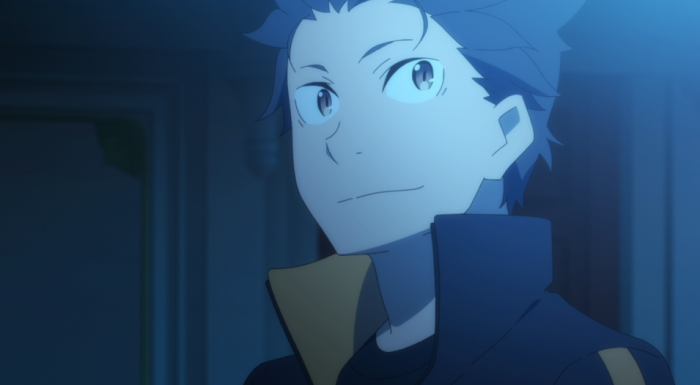 And we’re off. After what seemed like a bit of a detour, Re:Zero 2 is moving forward, full steam ahead. Last week’s episode was a step in the right direction, but this week, this week we fully moved in that direction and got some truly satisfying moments and twists. It will remain a wonder why the story quality drops so significantly when the focus is put on Emilia, but this week, despite the renewed focused on Subaru, even Emilia got some truly great development. Its almost like Re:Zero 2 is back to the juggernaut that it has been for the majority of its run.

A run, mind you, that’s had 28-30 minute episodes nearly every week, with the OP/ED being shown sporadically. This is, in fact, only the second time that we’ve seen part two’s OP and that too with no ED sequence at all. It makes me wonder how exactly something like Jujutsu Kaisen (A great show) was able to beat out Re:Zero 2 for the Anime of the year last year, but well… We’ll save that discussion for another occasion. I do believe that once this second part is over, that Re:Zero 2 as a whole will have a real shot at Anime of the year, and at the very least, will take a spot in my all time favorite anime series list.

So generalities aside, what was so good about this episode? Well, the gains this week were two fold. On the one hand, we had some serious forward progression towards the resolution of both the mansion and Sanctuary issues. That was cool an all, but the really impressive feat came in addressing a huge issue I had with this second arc (until now). If anyone’s read my thoughts on this season, then you remember how much I disliked the Subaru x Emilia scene from earlier in this second cour. 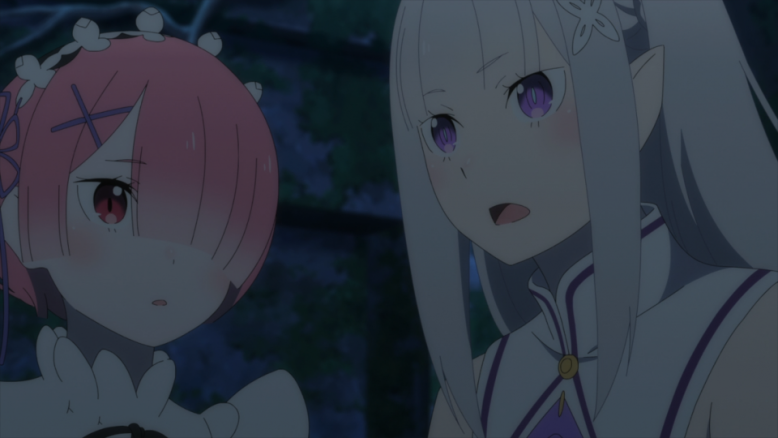 Subaru said I was best girl, while telling me how flawed I was.

Well… Color me impressed, because Nagatsuki-sensei and the anime production staff just tore into that scene, and used it to really build up Emilia in a believable way. The conversation between her and Roswaal shortly after Ram asked Emilia for her help, was some of that trademark depth and solid writing that has been missing in the last few weeks.

The key point here, was in differentiating Roswaal from Subaru, and how it was actually Emilia and her experience with Subaru that did it. I’m sure Nagatsuki-sensei intentionally planned it this way, but man was it genius none the less. Subaru is an awkward guy and there’s no doubt that he’s selfish and controlling at times. The thing that separates him from someone like Roswaal, however, is sincerity. Subaru may idealize Emilia, but he idealizes all of her, faults and everything.

Subaru may love Emilia in a way that seems incomprehensible, but he does so realizing that she has room to grow. He accepts her for who she is, but still pushes her to be better, albeit in his own flawed way. That’s actually really really well done, and very human. We can wax poetic about how real romance should be, and what a healthy relationship is, but this is the text book definition right here. 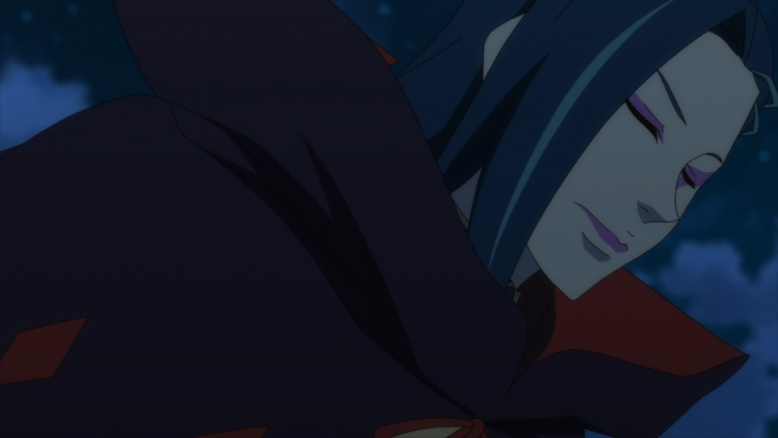 Hrm… Subaru has beaten me in the best girl argument.

People aren’t perfect, and its clear that Emilia and Subaru aren’t either. Yet, with this scene and with how it’s impacted Emilia, I’m finally convinced that Emilia and Subaru are actually good for one another. Emilia isn’t completely, totally adoring of Subaru, and Subaru is but he continues to want to win Emilia’s approval and affections. That weird power imbalance, continues to push both of them to grow, mature and improve.

The scene where Emilia literally proves to Roswaal that Subaru is better than him, is the real show stopper here. Emilia mentions that Subaru, in his desperate attempt to communicate his sincerity, lets himself reveal Emilia’s weaknesses and flaws as well. And they’re true flaws, and things that Emilia needed to hear. As a result, she’s stronger for it, having gone through her own trials using what Subaru told her as support and vital information. As Emilia rightly points out, no one else had ever done that for her, no one had just been honest with her to that degree, while also caring for her.

Everyone, whether it was Puck or Fortuna, have always just kept Emilia in the dark, protecting her. What Emilia, of course, needed, was the respect and honesty to able to be told how to improve. The fact that this is what separates Subaru from Roswaal, as similar as they may seem on the surface, is just really powerful writing. 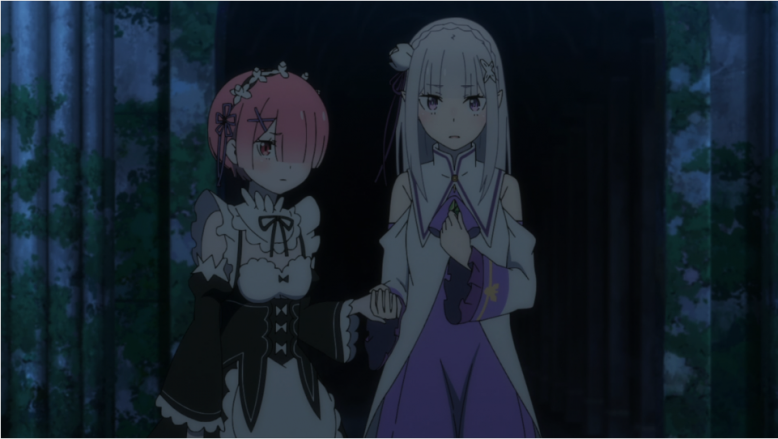 That sense of tension and unease…

And to give credit where credit is due, props to the animation team at Studio Fox, for just killing it with the small moments. The way Emilia and Roswaal both emote in this scene, with such nuanced looks of surprise, relief and dismay, is so darn impressive. Anime series like Jujutsu Kaisen and Kimisetu no Yaiba may kill it with those beautiful Sakuga fight scenes of flowing animation, but I found myself blown away by how realistic and expressive the character’s faces were in these scenes.

And if that weren’t enough, the Emilia and Roswaal scene is just one small part of this episode. The next killer scene is of course, Ram and her entire reason for not only helping Subaru and co, but also how she ultimately decides to confront Roswaal at the Sanctuary’s core. Again, this scene is just powerful writing, whether its the twists we end up seeing, or the dialogue itself.

Its fascinating how Roswaal continues to doubt Ram, and how she works earnestly to try and save him. I mentioned last week that Roswaal felt like almost a victim himself, trapped by his own past and what Echidna had left him. Well… This week not only echoed that idea, but it put Ram in charge of resolving that issue. And I honestly love that, because its honestly not Subaru’s problem to solve. Roswaal needs to be saved by someone that actually cares for him, and that’s definitely Ram. 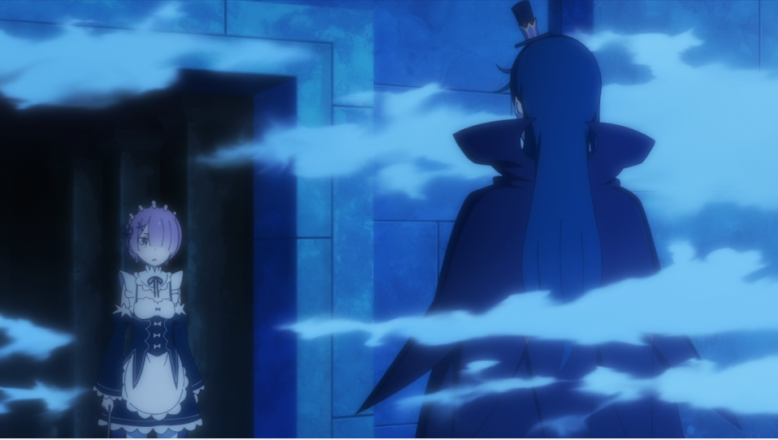 If the awkward communication between Ram and Roswaal weren’t enough, as those two prepare to duke it out, its actually the reintroduction of Puck that REALLY surprised me. Puck coming back and now having formed a pact with Ram is a nice little twist, and not only gives Ram a huge power up, but makes her entire collaboration with Subaru a lot more sensible. Subaru obviously trusts Ram, despite her affiliations, but Ram has always been a bit more of a wild card. To get the context to her actions AND get Puck back, well, it was a really satisfying moment that I never expected to see.

Now, its worth noting, that the Ram and Emilia moments are just two thirds of an already impressive episode. Next, we finally get back to the Mansion, and the episode ends in spectacular fashion by setting up the next major part of the story. Having Subaru arrive to help Petra was nice, but it was the Garfiel and Fredrica reunion that felt really satisfying. And man, I never thought I’d say this, but I’m actually quite hyped for a fight in Re:Zero, for the first time ever.

I really do want to see the whole Garfiel vs Elsa fight. These are two rather powerful characters, and while I’m rooting for Garf, I’m  not entirely sure if he’s strong enough to take her down. In any case, we’ll be waiting until next week to see that fight play out, but man is it exciting to actually want to see a battle play out in this show. 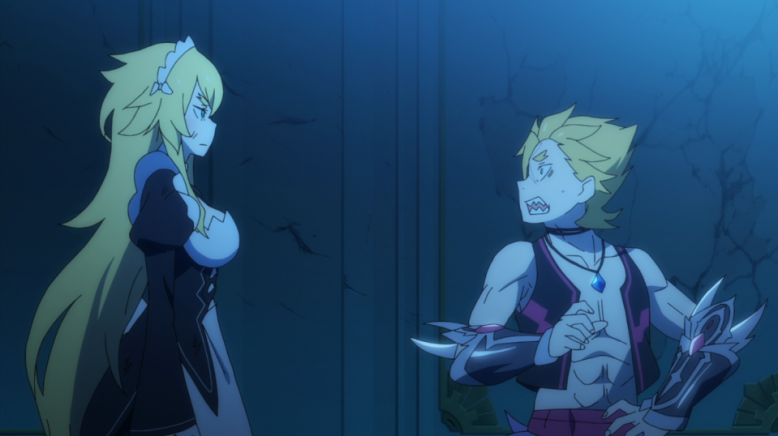 When you see your Onee-chan after a few years….

And of course, the episode actually ends with Subaru, once again, arriving in Betty’s room. This is the moment that I’ve been waiting for, ever since we learned about Betty’s rather tragic back story from last week. Betty, much like Roswaal, is in a prison constructed from regrets in her past. Now that Subaru actually has the the whole story, things are definitely going to go in an interesting direction.

See, as much of a foregone conclusion as Subaru rescuing Betty is, the way he does it is still very much a mystery to me. We’ve seen Subaru do things in his own awkward way, and the way the guy continues to endear those around him while still making a ton of missteps, is what makes Re:Zero so endearing, to me.

Subaru isn’t perfect, but his earnestness and the way he goes through hell for those he cares about, is what really makes him such an awesome character. It really is great to see him take the spotlight, again. Of course… Now the wait for next week, begins, yet again. 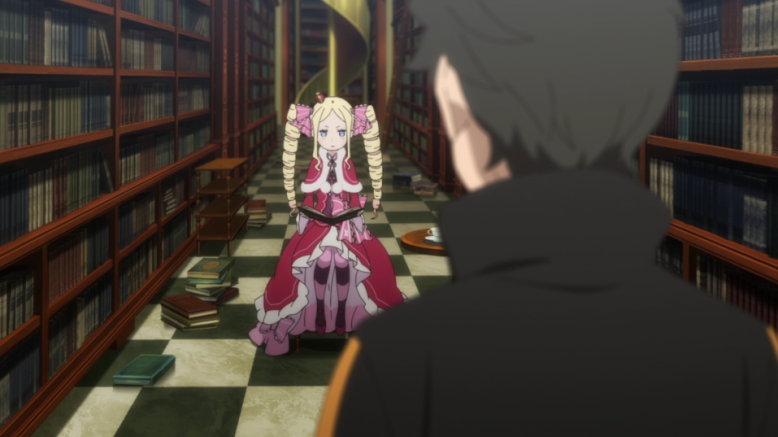 “Its time to leave the room Betty, and go OUTSIDE!”

P.S: This week and last week’s review are publishing at the same time. I mentioned I was dealing with some offline life issues, and it seems like I’ll be dealing with those and fun things like moving in a Pandemic, for a few weeks still. Apologies for the tardyness of posts, I’ll try my best to keep up with this stellar series as much as humanely possible.