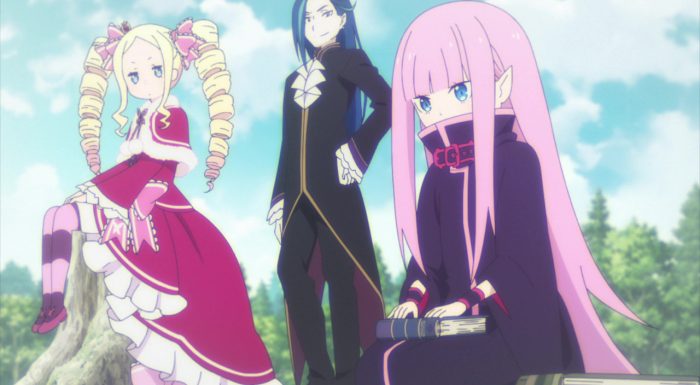 Now THAT is how you do a flashback. After a three episode flashback arc, its almost insane how Re:Zero dove head first into yet another flashback story this week. The upside, however, was that this week’s flashback story was not only good, it was great, fantastic even. In one episode, the show managed to achieve more than it has in its three episode story arc prior, while also really kicking things back into gear in terms of momentum. The Re:Zero story roared back to life this week, and thankfully, marks a true return to form for what has been a near perfect series overall.

The key difference, I think, between this week’s rather successful episode and the last three, was restraint. Restraint in terms of length, restraint in terms of drama and restraint from the characters. There was an elegance here that I don’t think we’ve quite seen from Re:Zero 2’s flashbacks thus far, pushing things even further than the Otto backstory we got a couple of episodes ago.

The restraint in length was, however, by far the biggest boon to this story. We got the cliff notes about Roswaal’s relationship to Echidna, Roswaal, Betty and Ryuze’s dynamic and even got some hints on the Sanctuary and a new antagonist. This was almost the same kind of story as the Emilia stuff we got a few episodes ago, but the lack of information and the willingness to just cut and go through the relevant beats, helped this story really sing. 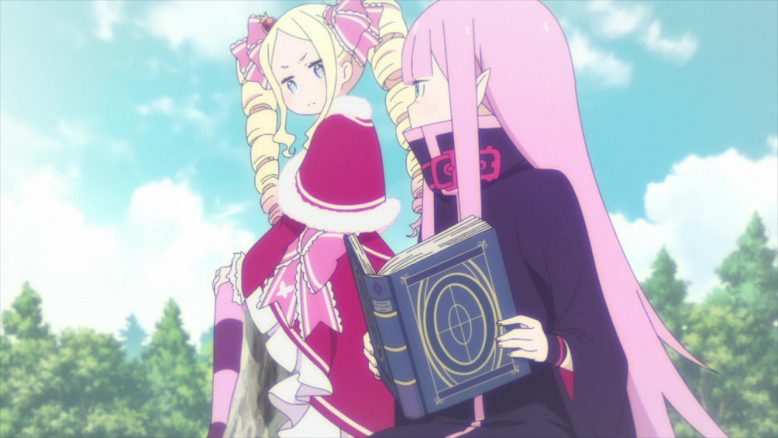 In a few short moments, combined with the little tidbits we got last week, Ryuze and Betty’s whole relationship was what formed the “emotional core” of the story. There was nothing artificial or fake about Betty and Ryuze’s interactions. They acted like real friends, bickering, teasing one another, and also just caring for one another without devolving into huge fits of despair. The moment where Ryuze and Betty say good bye was so powerful, so perfect in both its acuteness and in the way the characters genuinely struggled with the situation, that I just couldn’t help but get teary eyed.

Granted, Ryuze and Betty are characters that I’ve known about for a while, but the way the show developed their friendship in the span of a couple of scenes through 1.5 episodes, well that’s masterclass storytelling. We, as the audience, already also have context for Betty’s abandonment issues with regards to Echidna (her mother), and that definitely gave the show the extra omph! it needed to really sell Betty’s anguish here.

Betty’s desire and pain at not being able to save her one friend, or those around her, felt real. It hurt, it stung and it provided some real weight to not only the flashback story, but the overall story of the Sanctuary and the Mansion. I have always wanted Subaru to go and help Betty out, but after seeing her tragic backstory, I can’t help but want it more. 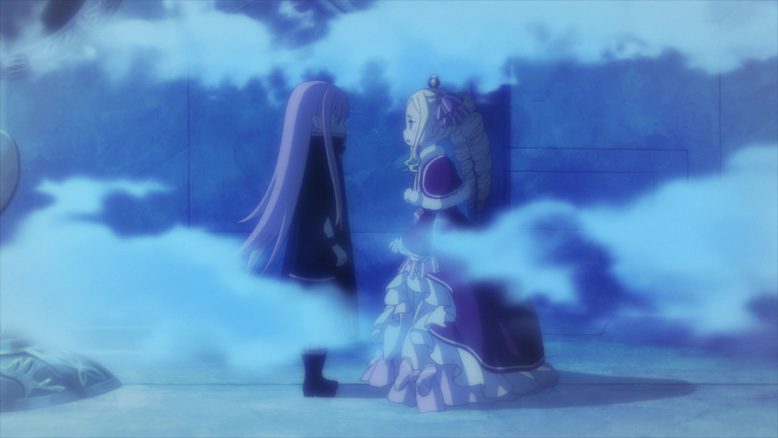 The loli friendship that made a grown man tear up….

And that, that is what powerful storytelling does. That is what the purpose of a flashback is, to strengthen and empower the story that’s being told in the present. Not only did this flashback sequence do this for Betty and to a lesser extent Ryuze, but it flowed beautifully into the central conflict of the story at this particular point in time; Subaru vs Roswaal.

I must admit, the Roswaal loving Echidna thing was a bit of a surprise, but once I saw that piece, everything immediately clicked. Roswaal’s overwhelming belief in the book, was tied to his affections for the woman that not only saved him, but served as his mentor and teacher. A woman, that, incidentally Roswaal was unable to save when he faced off against what seems to be yet another antagonist to add to the mix of growing rogues in this story; Hector the Devil of Melancholy.

On the topic of Hector, I will say this; We got as much of him in this episode as the story needed. We have no idea who Hector is (whether he’s someone with Echidna’s Witch Factor or…?) but we do know that he was after Echidna, and that he was the reason that the Sanctuary was ultimately formed. We also know that he’s a character that neither Echidna, nor Roswaal, Betty or Ryuze could take down. That establishes his threat level, his personality and his brutality when he faces off against a younger Roswaal. It basically cements him clearly in villain territory. 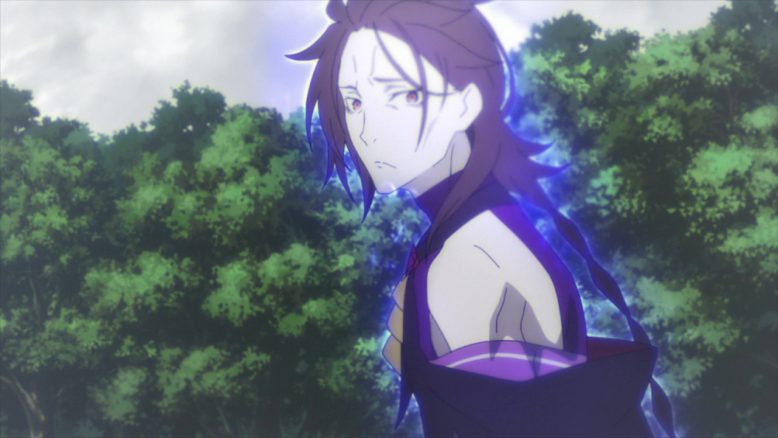 Hector, the new villain with the energy of a snail.

Now, while we’re talking about antagonists, I’d be remiss to not mention Echidna herself. Echidna, as a character, is perhaps one the most fascinating things to come out of this second Re:Zero series. I originally pegged her as a villain, and then a wild card, and now it seems that she may have very well have been… Good?

I’m still not sure what to make of Echidna, but whatever her reasons and motivations, she did save a lot of people and give them happiness. There’s a good side to her, even if her selfishness seems to overrule some of her better qualities. That kind of nuance is something I think Re:Zero clearly lacked, and the mystery of what exactly Echidna is and where she lands on the good to evil scale, is an element that really spices up the story.

Echidna may act evil, but all we’ve seen her do is help literally every character grow and become better versions of themselves. The sanctuary itself also gives a lot of different, downtrodden races serious protection. Its a sanctuary both in the physical sense, but also the emotional sense as well. 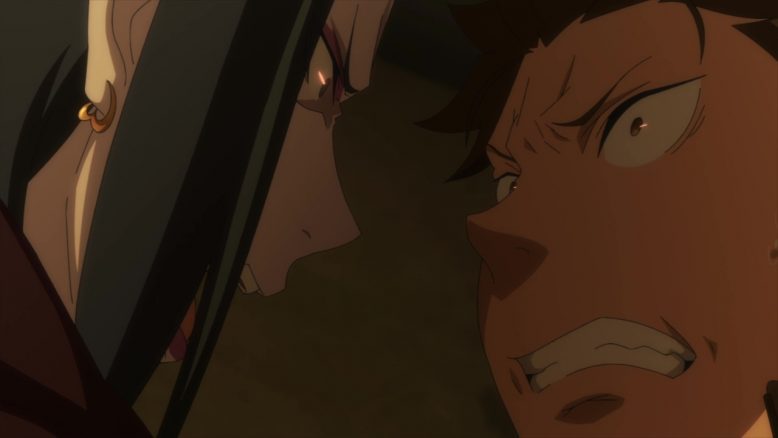 Of course, what’s most fascinating is that whatever Echidna’s ultimate intentions were, she has also left a bunch of broken people behind in her wake. Betty is forever trapped inside a library waiting for a hypothetical someone that may never come, and Roswaal is so obsessed with Echidna that he’s basically abandoned everything else.

Speaking of which, I LOVE, love the dichotomy that’s been setup between Roswaal and Subaru. How one empowers, and the other devours those around them. its clear that Subaru is in the right here, but what makes this whole thing so impressive is that Roswaal isn’t necessary evil, he’s misguided. Roswaal is a victim of his own guilt and powerlessness, having failed to save his friends and the woman he loves. To that end, he’s accepted weakness as a matter of course, and become trapped in it.

Thus, Subaru’s true enemy isn’t Roswaal, but the trap of guilt, loss, pain and weakness that imprisons him. And as Subaru learns this week, that is something that’s not exactly easy to overcome. 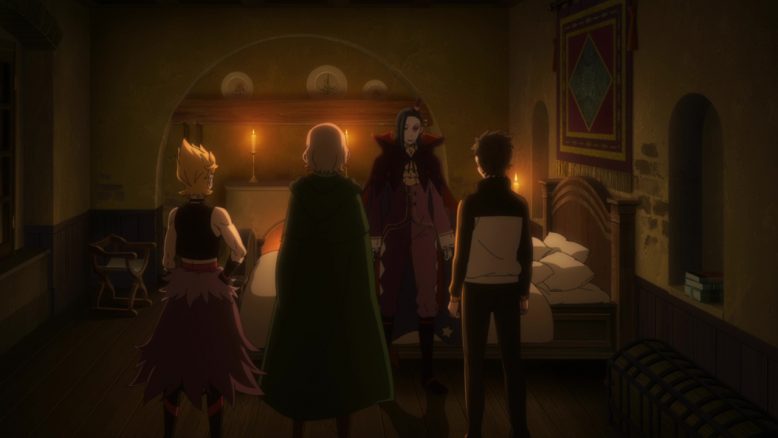 Its the Otto that always throws everyone off…

Which, ultimately, leaves at a pretty solid place as the episode ends. We’re left with some lingering questions about the Sanctuary (How exactly did it form, and why did Echidna die?) and we have some momentum in Subaru’s battle of wills with Roswaal. Emilia is also ready to get going, so now the story can focus, in earnest on resolving the complex web of interlocking problems that its weaved for its characters. The wait has been long, and the setup meticulous, but things are fine moving along. Exciting, exciting indeed.