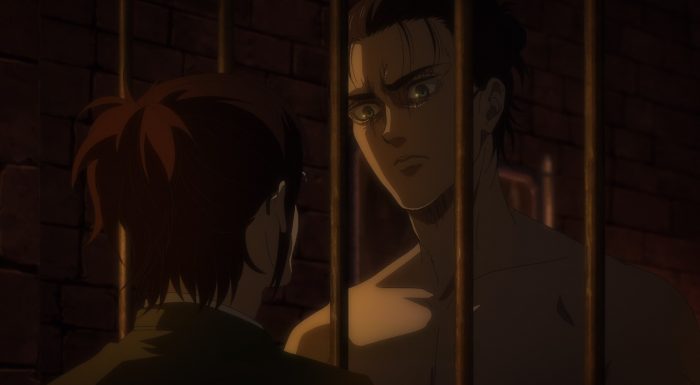 The final season of Shingeki no Kyojin is like a pendulum in terms of quality, oscillating between good to mediocre constantly. Its a curious case, to see this show try to do so many different things and to struggle at it all so spectacularly. This is a show that is trying to be a commentary on humanity and war, its also a story about humans transforming into hulking giants and eating each other. Its trying to focus on its characters and give them meaningful arcs, and yet its transforming and disfiguring those very same characters in service of its plot and commentary. Its trying to be both a slow, thoughtful contemplative experience and an action romp, at the same time.

Shingeki no Kyojin honestly feels like a show that is at war with itself. It feels like it has no idea what it wants to be, and to cut even deeper, I think its writer/mangaka Isayama-sensei is just trying to push his own story into something its not. Every time the show shifts its focus from the battle between Marley and Paradisio and pivots towards the larger politics of this weird world, things start to get dull, boring and convoluted. 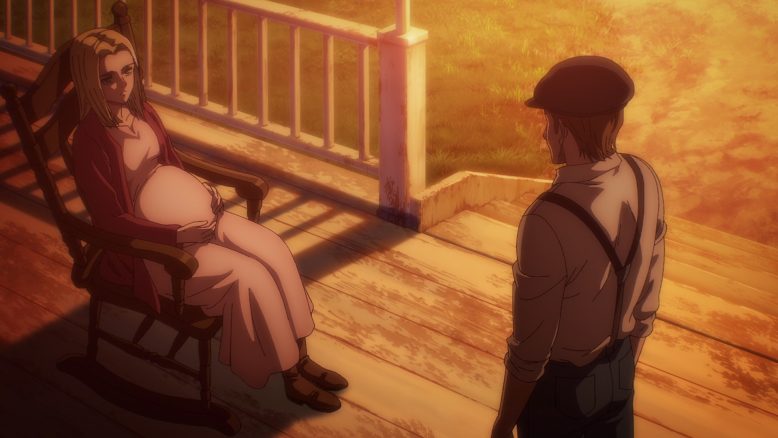 Speaking of weird… Pregnant Historia out of nowhere?

The pacing also feels so… Weird this season. We had so many episodes in the start of the season dedicated to Marley, then we switched to a sudden explosive confrontation between Eren, Paradisio and Marley, and now we’re back to a slow contemplative look at Paradisio. This entire episode, while chock full of interesting moments, also felt highly unnecessary. Why was an entire episode dedicated to something we already knew? That Eren has changed so drastically, and that no one understands why.

We got that two episodes ago, when we saw the big rift between everyone from Paradisio and Eren. So why then, did we spend an entire episode focusing on the show contrasting Eren’s past self with his current self? Why do we get scenes with Eren talking about how much he loves his friends, and then get scenes where Eren bullies a former friend and mentor in Hange, showing her that he’s the one who holds all the cards? 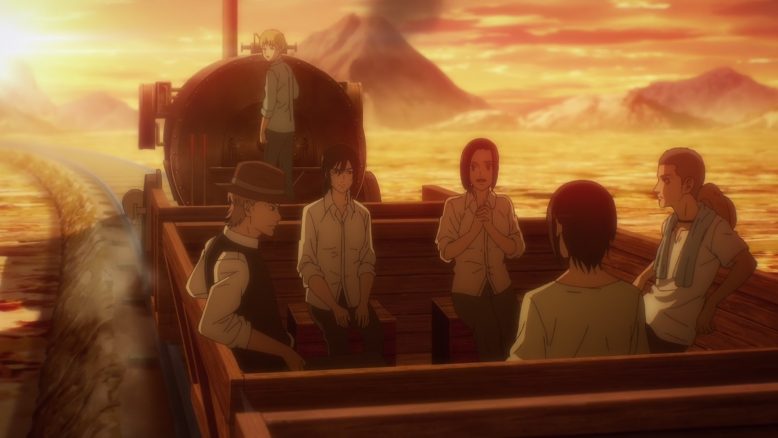 Just an old fashioned steampunk ride with the mates….

If the idea here is to build up a mystery as to why Eren changed as much as he did, then its wasted effort as far as I can see There was enough of a mystery about Eren and his motivations two episodes ago. The lingering question of how Paradisio had changed was answered last week. This week? It was the entire cast of characters just reflecting on the past, doubting Eren and honestly not doing much.

To add insult to injury, mysteries like the Ackerman clan, for instance, were resolved in such a anticlimactic way this week. Mikasa is the descendant of another race of people (Seemingly inspired from traditional Japanese), yet these people are less interested in their historical links to Paradisio and just want to get at the natural resources present there. So now, not only is Paradisio a huge military threat with their Titan powers, but they also have natural resources like Fuel? 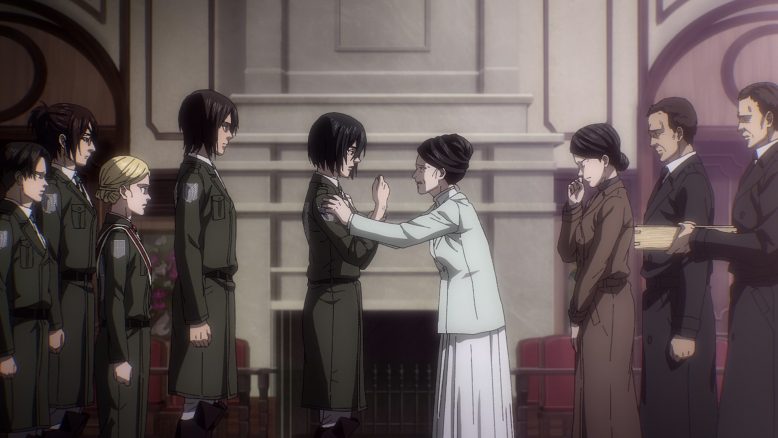 “Child, do you have the oil? We need the oil, you see, for it prints Money!”

And Look, I get what’s going on here. This is a pretty blatant reference to our modern world, and how various countries have bombed and invaded other countries for natural resources like oil. The question I have is this; “Why here and why now?”

If Isayama-sensei is using Shingeki no Kyojin as some kind of device to comment how messed up our modern day society is, then well, point made. The thing is though, to anyone living in the modern world today, that’s pretty readily apparent. There’s nothing revolutionary or interesting about commenting on what is pretty much a fact for so many people living today. Whether you live in the west, or you live in Japan, there are huge systemic societal problems everywhere. Most of them can be traced back to greed and depravity in our history, for sure. 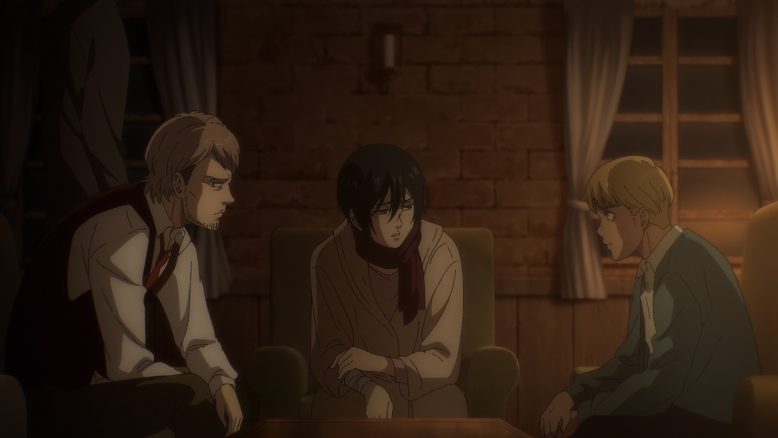 The Eren defense force is having a bad day…

So what exactly is Shingeki no Kyojin and Isayama-sensei’s end game here? Why deliver a stellar set of twists and build up momentum last week, only to totally deflate it this week? I just don’t get it. I go from thinking: “THIS IS IT! Shigenki is back!” to “Oh… Uhhh… I guess, not really?” so often now, that I’m wondering if those random flashes of brilliance are just statistical anomalies at this point.

There are some interesting things, like Zeke’s big plan here, Eren’s shift in perspective, Historia’s pregnancy e.t.c., but these ideas could’ve been touched upon in a quarter of an episode. And looking at the preview for next week, it seems like our two Marley kids are going to get the focus next week, so the story is more or less grinding to a halt again. 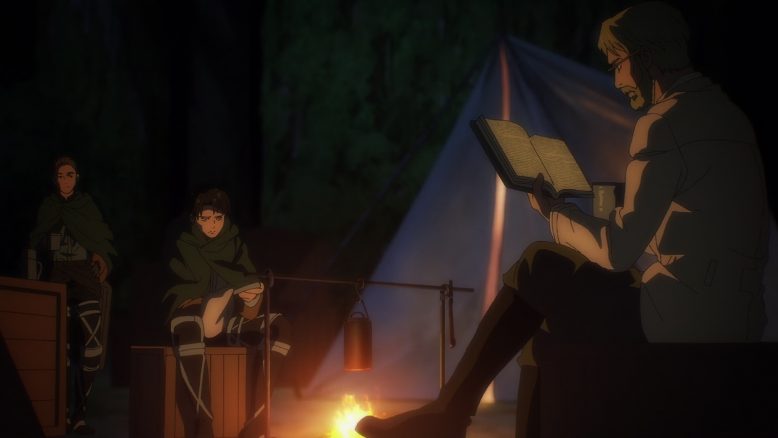 The plot slowed down so much, Zeke started reading a book…

Which, honestly, is quite worrying. This final season is known to be only 16 episodes (as per bluray listings), and we’re already at episode 10. Six more episodes, and this conflict hasn’t even properly started. Is this entire “final season” of Shingeki no Kyojin just going to be a giant waste of time? Are we going to get a “Shingeki no Kyojin Final Season part 2” in another season or two? Or are we just going to get a rushed ending in another 5 episodes or so?

Neither scenario sounds great, and yet we are where we are. I’m just not sure about Shingeki no Kyojin again, and yet I almost half expect next week to suddenly pick up again. It could happen, it could not. The problem is, this back and forth in focus, themes and general quality is making this show, rather difficult to watch and engage with.