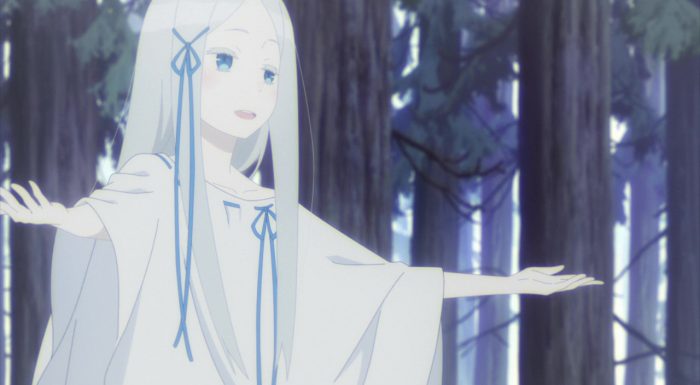 Not gonna lie, this is starting to drag a bit. Parallel flashbacks? Long backstories that don’t seem to mean much of anything? Long drawn out melodramatic scenes for characters that we were introduced nearly an episode ago? I can’t hardly believe it, but… In the last episode or so, the storytelling for Re:Zero has taken a bit of a nose dive in terms of quality. In a show that had been killing it nearly episode, and a show whose production staff is putting in SO MUCH love, its hard to stomach what’s happening in this series now.

Now… Before we got into all of that, funny story. I actually wrote a big chunk of this post the day this episode came out, and just couldn’t finish it. It was negative, intensely so, to the point where I decided to give myself some space to process the episode as a whole. As anyone who follows my Anime episode blogging will tell you, that’s a break from tradition, as I generally write about episodes soon after I’ve watched them.

In this case, however, I think I made the correct decision to wait. I can be a bit more measure in my response, and tone down some of the outrage that honestly, is a bit unwarranted. Having said that though… Look, I can’t mince words here; I didn’t like this episode. There was too much crying, too many melodramatic moments that felt unearned, and a story that ultimately felt meaningless and a waste of time. This is a first for Re:Zero as a whole, because as we went through Emilia’s entire childhood, I couldn’t help but just feel bored and uninterested. 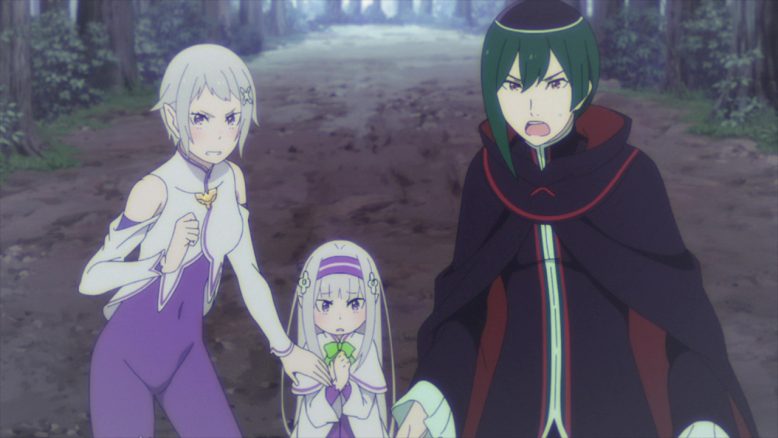 I get that Fortuna is really important to Emilia, and Betelguese is too. I get that we’re supposed to feel sad when Emilia, a young girl, was pushed away from everyone she loved. I get we’re supposed to feel chilled at the reveal of a new witch (Pandora), who may very well end up becoming the franchise antagonist. I get that, but I have to say, the show massively failed at making me feel anything.

And generally speaking, that’s not a deal breaker for me. The whole Subaru x Emilia moment from a few episodes also didn’t work, but it didn’t prevent me from just rolling along and ignoring that one moment as a bit of a misstep. The problem here, of course, is just how important the story wants to make Emilia’s childhood, and how the events we view in this episode, connect all our characters and various plot threads together.

While characters like Fortuna and Betelguese definitely form the backbone of Emilia as a character, its her run-in with the Witch Pandora and Corneus that ultimately tie everything into what Subaru and co are facing in the present. Emilia’s tragic past, her losing her parental figures, its meant to setup Pandora and Corneus as the franchise antagonists. The villains that ultimately created monsters like Betelguese. 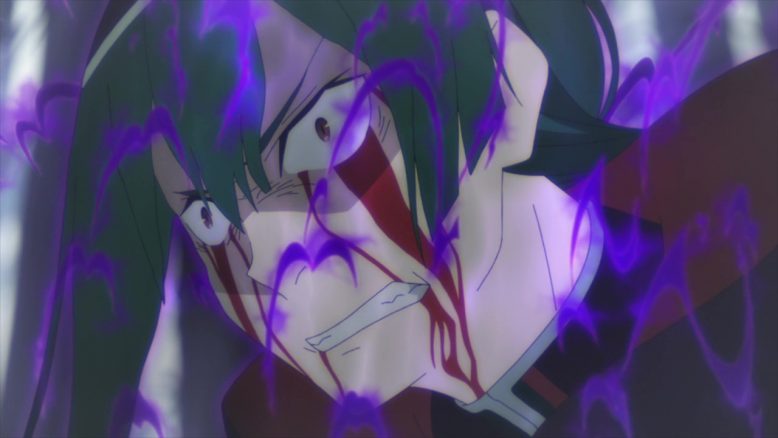 Speaking of Betelguese, well… While his story was tragic, there was nothing altogether too impressive here. Some astute people in the comments pointed out that Betelguese was already part of the Witch Cult, and it seems like that was very much the case. What made Betelguese transform into the psycho we saw in Season 1, however, was simply him sacrificing his sanity by taking in the Witch Factor of Sloth.

Sad, tragic as an idea, but it just emotionally didn’t hit for me because of how quickly it happened. I really do think that the reason that characters like Fortuna and Betelguese fell a bit flat for me, was because of how little they were focused on. They were, by design, supporting characters to Emilia. And Emilia, while a cute kid, really doesn’t have much going for her as a kid. Yes, she loves her mother (Fortuna apparently is her mom alongside her brother and sister? Weird Elf incest?) and is obviously torn apart by her separation from her, but this is all standard stuff.

The crying, the wailing, the promises, something about it just felt… Fake? Maybe it was the seiyuu who played Emilia, maybe it was how cliche and cringeworthy the actual dialogue itself was, or maybe I was just not too interested in this particular aspect of the story but… Whatever the case, I just found the whole scene of Emilia resisting what clearly needed to happen, to be longer than they needed to be. 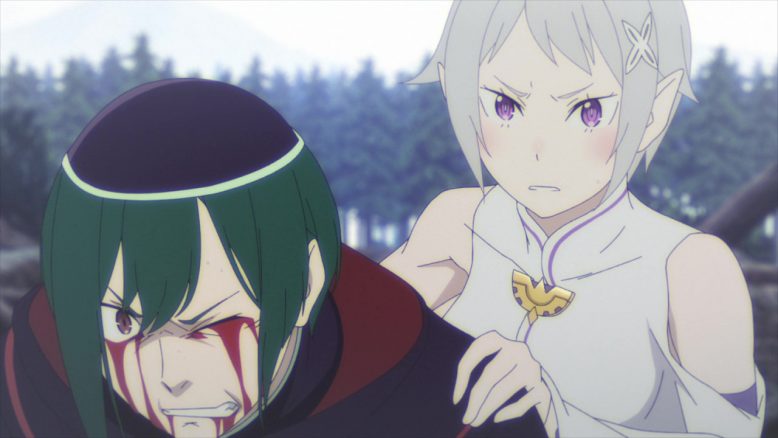 It would’ve made more interesting to me, if these flashbacks focused more on Betelguese and Fortuna, and perhaps even Pandora. Pandora, for her part, is yet another weird loli witch that just goes according to her own whims. We’ve seen enough of those, at this point, that I honestly didn’t find her that interesting. I almost thought, for a second, that the show was referencing one of the witches we had already seen, only to realize that that hadn’t been the case.

No Pandora, is yet another witch with a crazy amount of power, that can just do whatever she wants. She can’t die either, unlike the other witches, so whenever Subaru and Emilia end up facing against her… Well, things will certainly get interesting.

The world building questions that arise, which are almost cursory to all the Emilia centered stuff, are I think the little nuggets of brilliance hidden in between a ton of disappointing mediocrity. Why was Betelguese in the Witch Cult? Why was the Witch Cult protecting Emilia? What are the rules of the cult and how can Pandora supercede them? Why was Betelguese, alongside Fortuna, trying to hide Emilia (who is obviously the key) and the seal? What is the Seal? 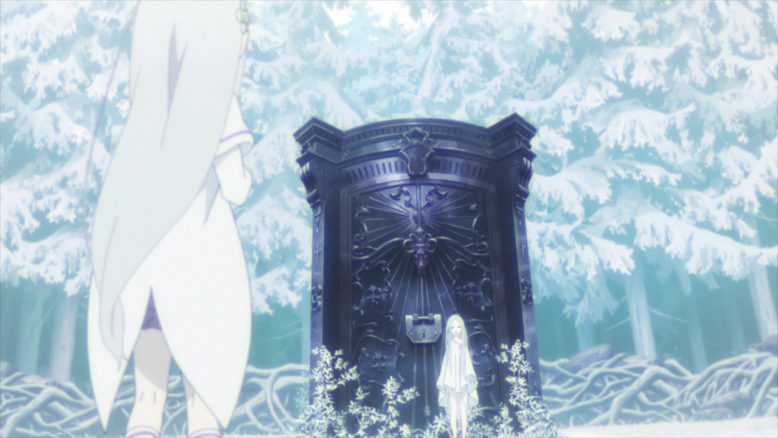 That last question, is obviously going to get answered next week. My problem, and this is something I mentioned in some of my posts for Shingeki no Kyojin this season as well, is that I don’t think we needed a lot of stuff we got this episode. A lot of the key scenes could’ve been revealed during some event, like how Otto’s whole backstory came about. I get the importance of Emilia to the story, but the story itself just hasn’t shown to me what the importance actually is, just that well… She’s important.

Which, ultimately, is why, despite the few interesting nuggets here and there, this was by far the weakest episode of Re:Zero, period. I’m hopeful that this is the low point, and that we’re done with Emilia’s past, because I’m about ready to go back to Subaru and the rest (who we briefly see). The stuff with him, Betty and Ryuze was brief, but man is that a lot more interesting than the Emilia stuff.

And to be clear, I came into these last two episodes, WANTING to like Emilia and her backstory. I was biased for her, and to see the show just so royally screw that up, was well… a disappointment. 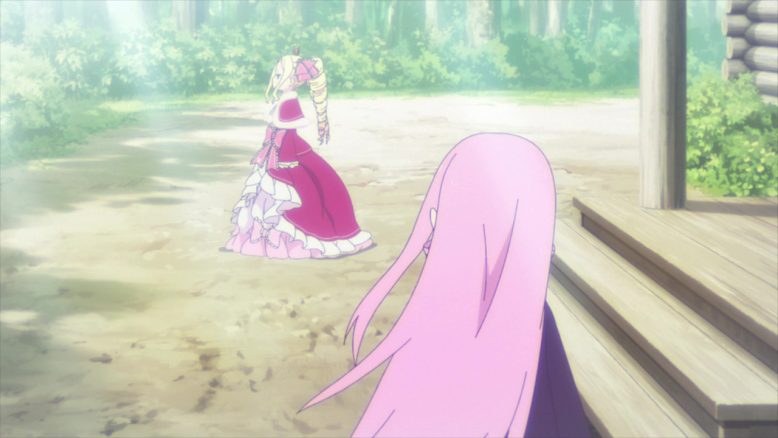 Is this the death sentence for Re:Zero 2? No not really. If the damage is limited to just these two episodes or so, then I think there’s still a lot of potential for this show to be one of the best of the year, if not the decade. Nagatsuki-sensei just can’t seem to write Emilia as well as he can say Subaru or Rem, so I think that is what is ultimately showing here. No amount of animation, awesome production values, or even pacing can cover an ultimately weak story.

That said, I’ll close by saying that while I didn’t like this stuff, I get why it needed to happen, from a narrative perspective. There’s a lot of connection and setup happening here, and while these episodes and Emilia’s backstory as a whole may not work for me, I can see some serious potential payoff in the future. Lets just hope next week is the start of the transition away from the first misstep of this season, and perhaps the franchise as a whole.