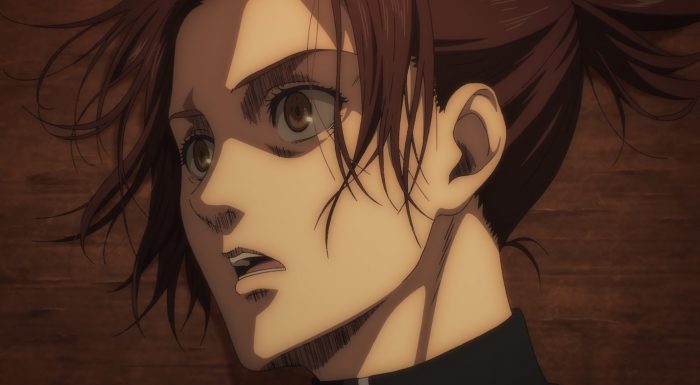 This episode, as late as it was, was so… important. It was the episode that this show, this franchise and this final season needed. While the last two or so episodes brought back the dramatic, action based flair that this franchise has become known for, it was this episode that brought back the mystery and the intrigue. When Shingeki no Kyojin was at its peak, it was a show that married fast paced jaw dropping action with an unpredictable and mysterious story. Both elements are a necessary part of the winning formula for this franchise, and while it took much longer than it arguably should have, its reassuring to see it all still come together, even this late in the game.

Make no mistake, at 16 episodes for this final season, we’re at the half way point now. If you had told me that a Shingeki no Kyojin season would get good only after half of its episodes were done, I would’ve laughed you out of the room. Yet, reality is what it is. So… Rather than dwell on that, I’d like to focus on the large of amount of good stuff we got this week.

I’ll start, by stating that this week had the first episode, in a long while, that made me feel genuinely intrigued, involved and excited for what was going on. Shockingly, these positive feelings had less to do with the complex themes of war, or even the action, and had everything to do with just the overall plot itself. 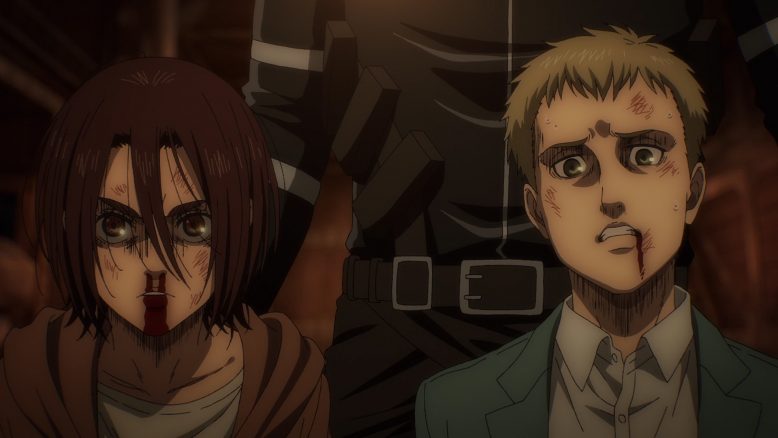 There were a few good twists thrown in this week, that dramatically changed and most certainly improved the overall story. The first of those, was obviously having Gabi and Falco infiltrate the blimp, killing two Paradisio soldiers in the process. One of those people? It was none other than series (former) mainstay Sasha. Sasha dying at this very moment, in such a sudden and brutal way, from a child soldier? There really wasn’t anything that could’ve been more tragic, sad and emotionally powerful.

And maybe… Perhaps…? That was the point that Isayama-sensei’s was attempting to make here. In this episode, we’re shown, quite intentionally, that human nature has a selfish side to it when it comes to conflict. Gabi and Falco are hurt, and they’ve lost so much, so Gabi can’t really see the “devils of Paradisio” as people. To her, from her perspective, they’re not. It doesn’t matter if Falco tells her about the fact that her side may have been in the wrong. To her, she’s only seen them hurt her friends and family. So what does that lead to? Gabi, a child, killing one of the characters that the audience actually cares about. 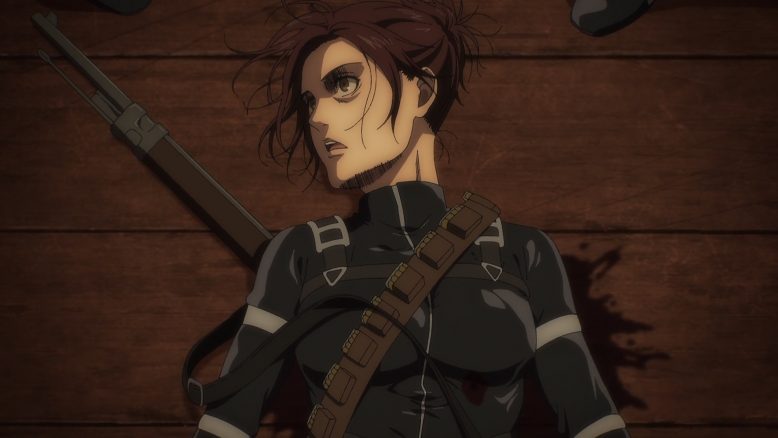 For those of us who were unfazed by the death of the Marley Eldians in the last episode (like me), this one hurts. I certainly didn’t want Sasha to die, or for Connie, Jean, Armin and Mikasa to suffer. So yes, Sasha’s death works. And if the point of the whole Eren surprise attack on innocents was to get the audience to examine their own bias on the ideas of casualties and loss? Well then, the point has been made.

It was done, however, in a rather awkward way. That becomes especially true when you look at some of the other, less than elegant stuff that gets presented in this episode. Gabi talking about how the internment camp is like home to her, and how she was trying to show the world that Eldians were good people? That drivel definitely felt hollow and a little disturbing to me. It felt like the Marley Eldians were so far gone, that they actually LIKED being in an internment zone. That said, Gabi is a kid, and she is going to get a first hand look at how the other side is, so this may very well be just setup for Gabi’s eventual change in perspective.

I sincerely hope that is what we’re driving toward here. Falco’s own thoughts that we see in the episode, definitely give some credence to the idea. That said, Isamaya-sensei and Shingeki no Kyojin have a lot to prove before I can truly believe in them nailing something nuanced like that. For now, I’ll say that ultimately, Shingeki no Kyojin is making me think about the very themes that I was uninterested in. While it certainly manipulated me and tricked me into it without any good faith, the story still achieved what it set out to do, and I can’t exactly deny that. 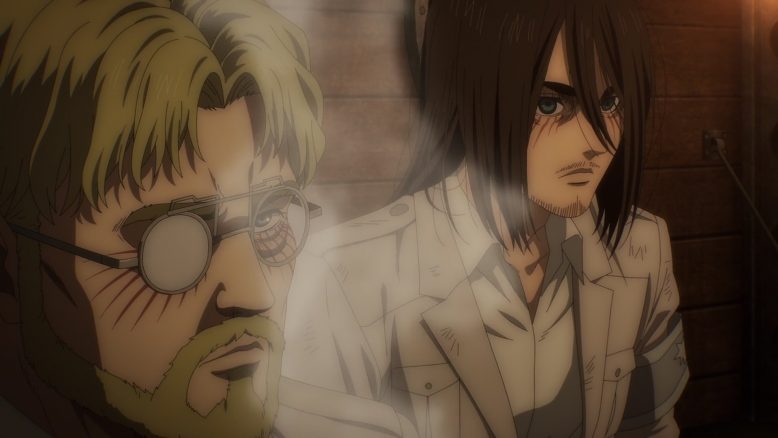 The two half-brothers together, not trying to kill one another? Who would’ve thought.

Whether this ends up working or not, for me, will depend on where we end up going with this. Now… Thankfully, Gabi and Falco coming over to the other side, in such painful fashion, isn’t all this episode had to offer. Perhaps most intriguing of all, was the reveal that Zeke was not only still alive, but that he was actually a double agent working with Paradisio in some fashion.  This reveal, is what really started to dive deep into an aspect of the story that I think the entire audience has been hungering for; the state of Paradisio.

There’s a few nice curve balls thrown in once the Zeke stuff takes center stage. One, its clear that Zeke and Paradisio have been working together since the first scouts were sent from Marley, four years ago. Pieck from the Marley side more or less confirms this by identifying the soldier that I mistook for Armin a few weeks ago.

Two, it’s very clear that Eren and his comrades are not on the same page anymore. Eren’s little stunt of getting captured and enacting a big, bold plan? Apparently he’s done it a few times now, causing heavy losses each time. Its clear that characters like Levi and Hange have grown quite tired of Eren’s behavior, but what’s worse is that it seems like Eren more or less has given up trying to win people over. 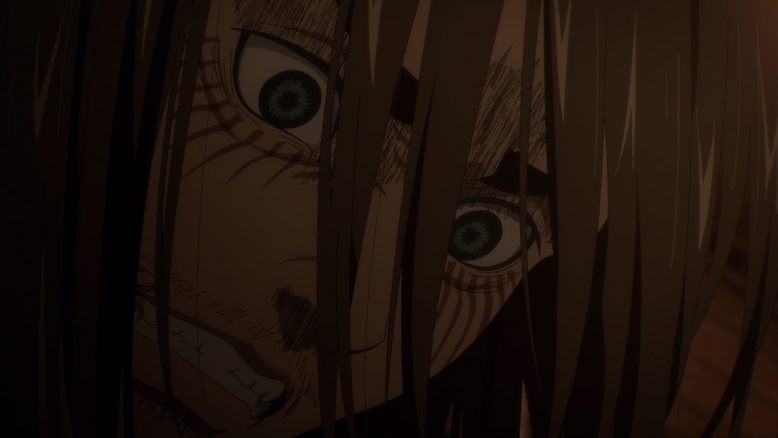 The pain of Eren continues…

What’s clear is that Eren has insight that everyone else doesn’t. We’ve seen him view the memories of the other Founding Titan holders, but I suspect that his powers extend beyond that. The key to the mystery of Eren’s big personality change may lie in those powers, and in perhaps being able to see the future as well. There’s little hints to that idea, particularly in the fact that Eren asks Connie for Sasha’s final words, and then is hardly surprised when he hears them.

If Eren can see the future in some way, then his actions and behavior makes a lot more sense. Eren has, in some way, already seen these events and to him, they are a reality that he’s had to deal with and accept. Knowing the future may seem like a powerful gift, but it can certainly be a curse.

Now, the big question is, how much actual control does Eren have over the outcomes of things? Does Eren get to choose a particular course of action, knowing full well what it may result? If that’s the case, then boy is Eren in a horrible situation. A situation where a character like Eren gets to choose who lives and who dies, all in service of the best possible outcome? Well… Its the kind of hell that would break someone as naive and hopeful as the guy we’ve seen in the previous seasons. 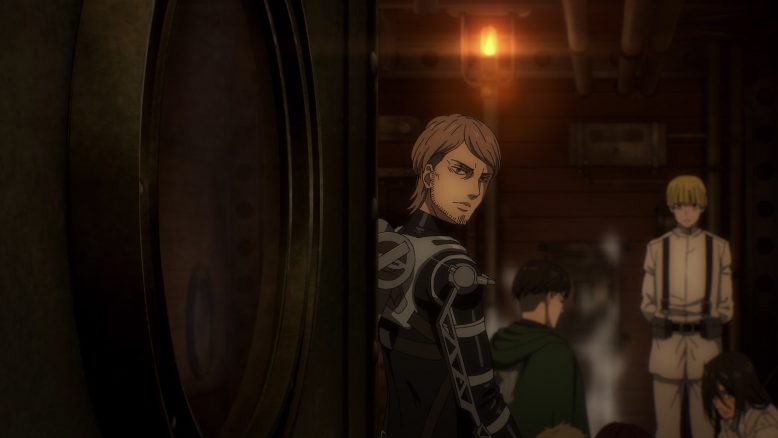 The door to characters moving the plot forward has been opened!

Again, I sincerely hope this is the case, and I hope that the way I’m reading things is correct. But hey, lets say I’m wrong, and completely off base. At the very least, this is all genuinely interesting. I’m excited to see what Shingeki no Kyojin is driving at here, and I can say for a fact that I did not anticipate anything that this episode threw at me.

The story has become unpredictable, there’s many tantalizing threads, there’s powerful character moments, and the actions of characters matter. Eren’s actions have given Paradisio a serious advantage in that he’s gotten a hold of the War Hammer Titan, and therefore the ability to full use his powers via the Royal Blood. Said Royal Blood is OUTSIDE of Paradisio, so whatever limits the King of Paraidisio implanted in his descendants, they don’t apply anymore.

That’s a huge advantage, and its one that may very well end up being the deciding factor in Paradisio’s fight for survival. At the same time, however, Eren’s actions have had a huge cost, and have painted a huge target on Paradisio’s back (AND more personally, gotten Sasha killed). That kind of weight to one’s actions? That’s something that I don’t think I’ve seen from this series yet. 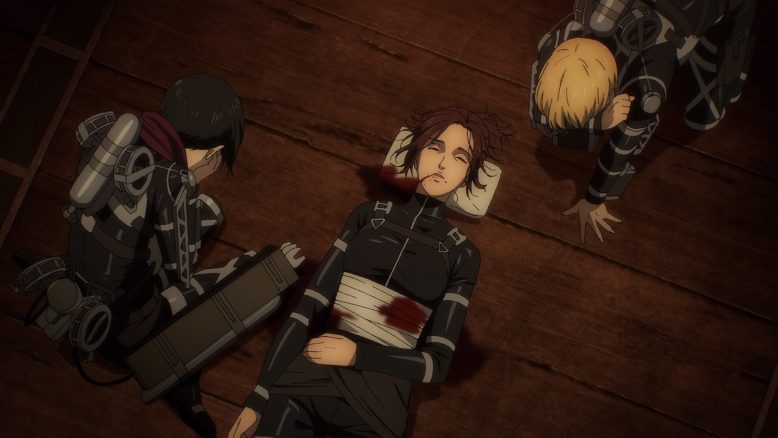 All the characters in this story have, in the past, been reacting to events happening to them. Now, for the first time, we’re seeing a character drive the story forward with their actions, and seeing that all play out. Actions have consequences, and I’m glad that Shingeki is actually incorporating that truth into its storytelling now.

So all of that said, where does this leave us? Well… Paradisio has gained quite a bit of an advantage here, with this operation being more or less a success. As Eren points out, they’ve gutted the Marley military, and gotten control of the founding Titan. They also have Zeke, which severely limits the other side’s ability to do much of anything. And while the downsides are pretty darn big here, its hard to argue that those downsides weren’t already coming.

Marley was going to turn the entire world against Paradisio, but unfortunately, its perhaps only Eren and the people behind the scenes in Marley, that would know that for sure. There’s still a question of whether Eren knew that, or whether he went ahead regardless. My money is on him knowing, if only because he waited for Willy’s speech BEFORE he acted. In any case, what’s clear is that Eren isn’t sharing everything with even his own allies. Which, in the end, puts us into a rather interesting sort of 4D chess game. 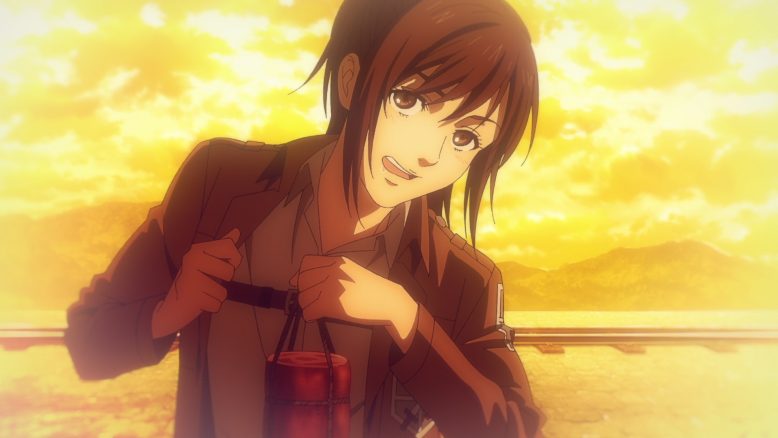 Good bye Sasha… You will be missed in this story.

A week ago, I was about ready to give up on Shingeki no Kyojin. A week ago, I was more or less convinced that this show was going to be another disappointment in a long string of disappointments that I’ve seen from Final Seasons lately. Thankfully, if this week did anything, it gave me a renewed sense of hope and enthusiasm for this show. Its not perfect, its not pretty, and its certainly different, but I can’t say its bad. I just hope that we continue to get more episodes like this one, and less of the stuff we saw in the last 7 or so weeks.