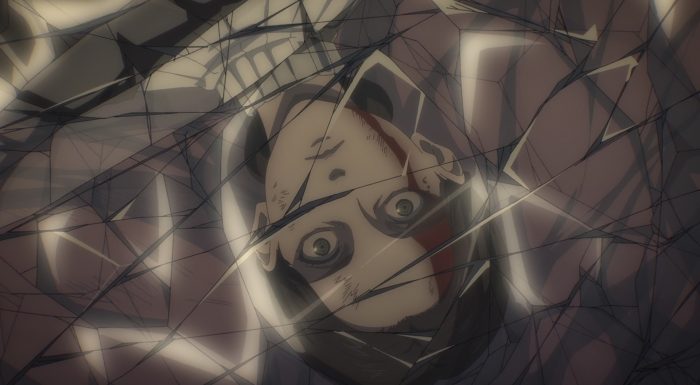 As we delve deeper into whatever Shingeki no Kyojin’s endgame is, I feel myself growing more and more detached and disappointed. There’s a clear and marked step down in terms of quality, not only in the animation but also in the storytelling and characterization. Its odd how much this show has changed in the last leg of its run, almost as if its become something else entirely. The themes and the ideas presented here might be grander, and Shingeki may actually be trying to SAY something rather than simply entertain, but I don’t think its a better show for it.

A part of me now wonders if its Isayama-sensei’s story that’s lost its way, rather than the execution in animated form. In my posts on the last few episodes, I’ve more or less laid the blame squarely on things like pacing, order of events and the animation. And to be quite frank, those issues still exist, but there’s also a larger issue of the story now feeling rather sub par and even silly.

Look, I get that Shingeki was never particularly smart, and had its own share of head turning ass pulls. Those less than graceful moments seemed few and far between though, and the show always seemed to have more good than bad in it. That said, this week, I just felt like Shingeki really lost itself, and it has mostly to do with how it treated its characters. 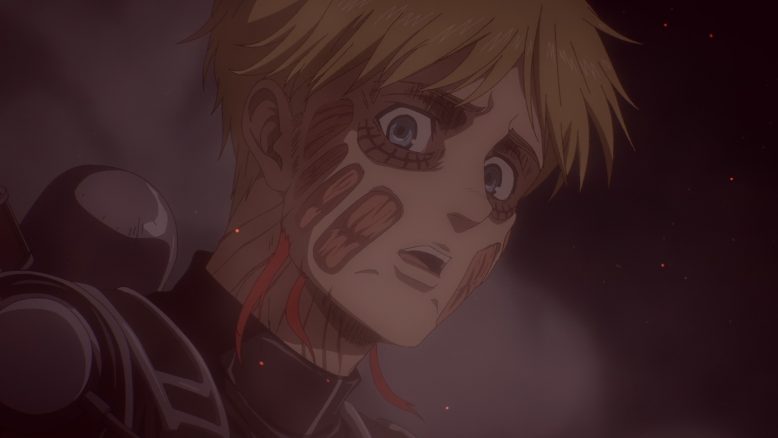 What have you become, Armin?

Mikasa, Armin and Eren have all made almost complete 180s in terms of who and what they respresent. Mikasa has grown a conscience and seems to feel the weight of her actions, while Armin and Eren seem to feel nothing. Both are willing to do whatever it takes and are fine with going completely against who they were before. Eren was always the naive idealist, and Armin was the realist with a level of intelligence and general goodness that was absent from nearly everyone around him.

Transforming Eren into Reiner’s analogous foe and transforming Armin into an Erwin clone, is just really killing what made these characters so great. Eren refused to stoop down to “whatever it takes” to save the day, while Armin was almost the polar opposite to the reckless and self indulgent Erwin. Taking a character like Armin, and transforming him into Erwin, feels like such a power move from the writer of the story, in the worst way possible. Its making the character fit a particular mold, to push a particular part of the story in a particular way that feels jarring and forced.

And well… If that were all there was, I’d be upset but not devastated. But that’s the thing… There is more, a lot more, that the show does this week amidst the bombastic action sequences that its become known for. Essentially, what Isayama has done with this story, it seems, is flipped who the heroes and the villains are, at least for now. 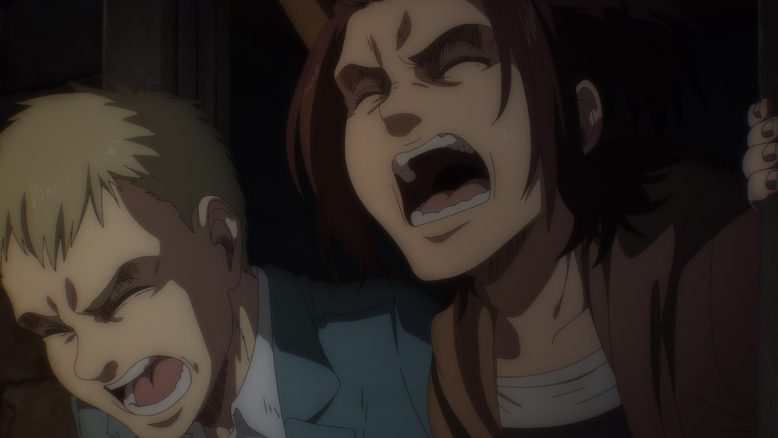 The ones in need of saving sure are… Annoying?

Paradisio is clearly the antagonizing force here, and Marley, the victim. Sure, Marley was intending to go and enact a genocide on Paradisio, but the Paradisio side just mounted a surprise attack on innocent civilians! If this is an attempt at showing that both sides are wrong, and no side is good in war, then it feels like its coming at a huge cost.

The cost, the huge cost, is the characterization in this show. Robing characters like Eren and Armin of their personalities, switching them suddenly and abruptly into villains by circumstance? It just isn’t great storytelling. Eren systematically taking down the hammer titan, and all of Paradisio basically taking down the entire Marley Titan squad is cool, but it feels hollow when you start to see who the bad guys are here.

Its all intentionally done too. Paradisio is shown as cold, almost inhuman, while the Marley side is shown to have people banding together, trying desperately to survive and protect their loved ones. This literal monster controlling military is shown suffering and being eradicated, with fear in their hearts, as they get offed by a much smaller force. The same force, that the show clearly wants you to forget, was going to be attacked by these very “vulnerable” Marlians. 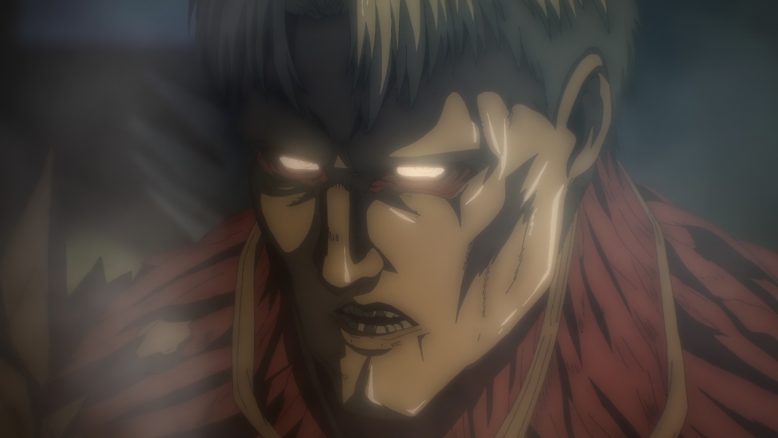 The face of the new hero!

Now… all of that certainly feels foul, but what comes next is far, far worse. Not only are the characters that we’ve followed and loved for so long suddenly twisted in unrecognizable ways, but characters who have been primarily antagonists in this show, are now being shown to be heroes. The whole scene with Gabi and Falco screaming for Reiner, was not only stupid, but felt horribly unearned.

Reiner isn’t some war hero who’s seen a ton of stuff and is tired of it all. We just saw Reiner’s entire backstory, where his own ego led to the destruction and killing of so many people. Reiner suddenly getting this role as the hero that’s going to save his side from the very people whose lives he ruined, is some utterly grotesque logic gymnastics on display.

I’m sorry, I just can’t get behind whatever it is that Isayama is pushing here. Whether its “there are no heroes in war” or whether its “both sides are human”, I just can’t find any of this endearing. Maybe if Eren’s descent to the dark side had been slowly built up, then well, this arc could have worked as a tragedy. A tragedy where war ends up perverting and destroying a good man and turning him into a cold sociopath. 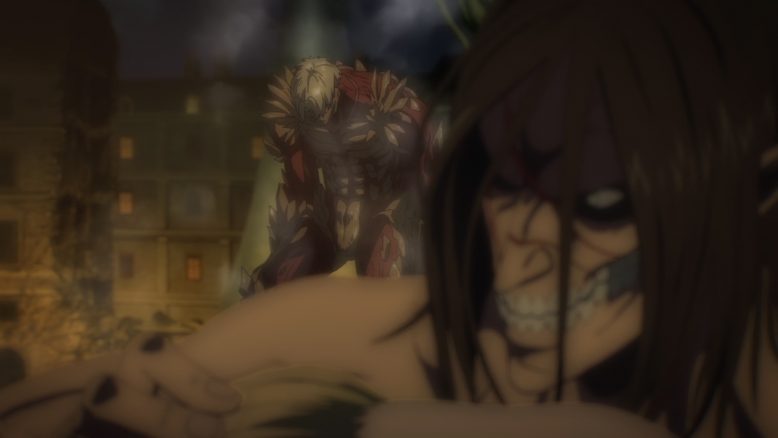 Oh look, how the positions have changed!

That idea, as a story, could work. The problem is, that’s not the story that we’re seeing here. We’ve skipped past the slow and methodical deconstruction of a character, and gone straight to that character being an entirely different person who has no qualms committing atrocious actions and being evil.

The fact that this episode, which featured some decently well done animation sequences (still cheaper looking than Wit, but decent none the less), still disappointed me, says a lot. I had mentioned  last week that I wanted to just enjoy Shingeki on a surface level, but… The show is making it quite difficult to do even that. Its one thing to throw in symbolism that’s easily missed, its another thing entirely to TELL the audience what they should feel and who they should root for at any given moment.

Which, ultimately, is the big problem here. Shingeki wants me to believe certain things, certain things it seems to hold as fact, but it refuses to actually sell me on those very things. And by ripping apart my only connections to the story (the characters), its actively pushing me further and further away, as a viewer. 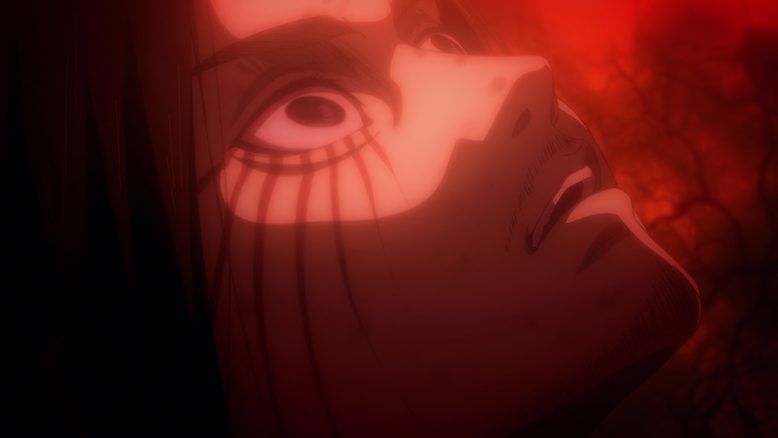 Which, ultimately, is a sad state of affairs, isn’t it? The animation of this show is at best, serviceable, where it used to be great. The storytelling is at best, muddled and at worst extremely sub par. And the characters? They seem to be unrecognizable from the entities that we had seen previously. What that leaves, is a show that just feels like it doesn’t care about anything. It doesn’t care about what its done before, it doesn’t care about its own story, themes or characters, and it also doesn’t seem to care about the audience that has followed it and loved it for such a long time.