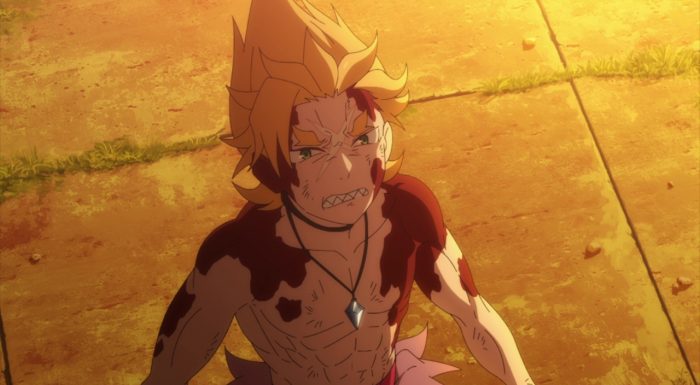 Even a relatively weaker episode from Re:Zero 2, is still leagues ahead of everything else. That really is the position that this show is in (for me), where I end up comparing it to itself more so than anything else. Heck, I call this week’s episode weaker, but that has less to do with the actual quality of the episode, and more to do with my own personal tastes and preferences. Re:Zero 2 has quite a few plates spinning at this point, and it was about time for one of them to be deal with. Was this particular plate the one I cared about? No. Was it important and a solid plate in its own right? Definitely, yes.

Ultimately, when you boil it all down, this week’s episode was about the resolution of the whole Garfiel plot line. Garfiel, as a character, has been a bit of a wild card in the story thus far, and his motivations and perspective have been an ongoing mystery. Not only that, but it served as one of the key challenges that Subaru has had to contend with in this arc. Resolving Garfiel’s issues and making him an ally, is most certainly the first step towards potentially getting out of the sanctuary, and then dealing with the Great Rabbit.

To that end, I think this episode did a solid job of finishing up Garfiel’s story. I don’t care much for Garfiel personally, so him getting the Rem level treatment this week felt like a bit of wasted time for me, If I’m being honest. I get that its important, and I get that it actually speaks highly of the story as a whole that it focuses on developing most of its characters. And who knows? Maybe Garfiel has a much larger story to play in the future. That said, I myself can’t really see him as anything other than a side character at the moment. 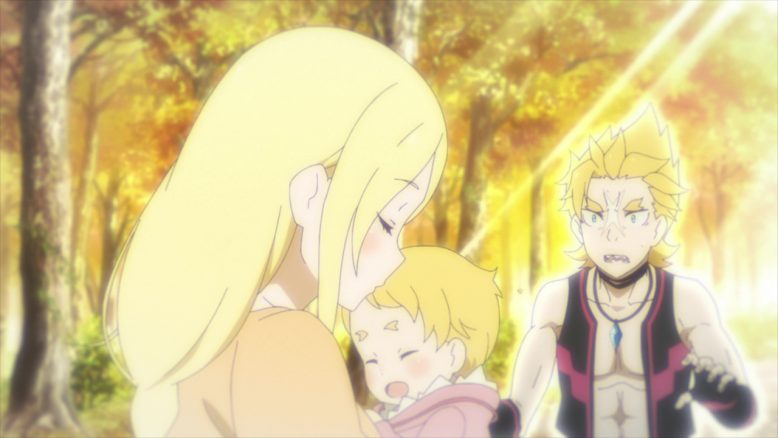 Every Monster cat dude starts off as a cute kid with a loving Mommy!

Comparing last week’s Otto focused episode to this week’s Garf focused one, I know which one I like more. A lot of that certainly has to do which character was in focus, and less so to do with the episode itself. If we’re talking strictly on episode quality, then I have to say that this week’s episode was an overall better one. No cheesy romance, and the emotional beats hit the way they were supposed to.

Garf’s story isn’t anything special, but it worked fine for me. Garf’s story, was a story of an abandoned kid who ended up misconstruing facts to cope with the loss of his mother. The only problem, of course, is that Garf isn’t your average 8th grader. He’s a 14 year old who can transform into a massive cat monster version of Garfield (the lasagna eating cat) and has super strength. So when Garf throws a tantrum, people die. Really easily.

As to how we got to Garfiel growing up a  bit, well… I will say this, I loved how Emilia and Subaru managed that whole problem. Both of them really could empathize with Garf, having gone through similar growing pains themselves recently. Subaru, well, he’s gone through some tough ordeals throughout the series, while Emilia just recently made her own journey towards self improvement. While I’m not entirely sold on the journey, I am liking this more mature Emilia. 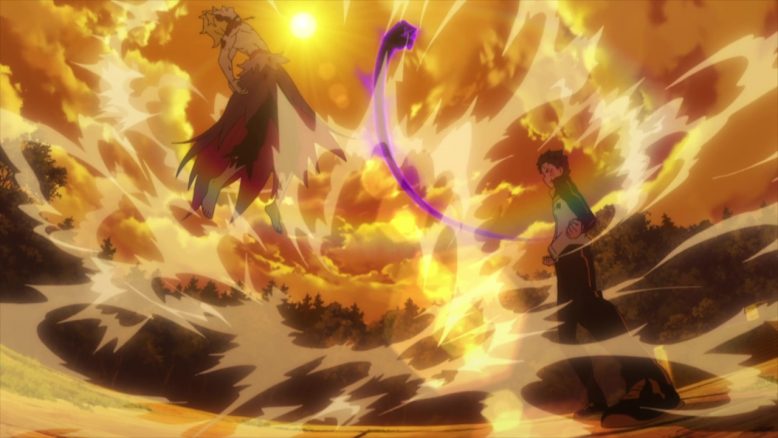 Before we move onto Emilia though, I do want to talk a bit more about Subaru. First of all, I loved the callback to Rem, as fan servicey as it was. Rem IS the reason Subaru got out of his despair cycle, and its the lessons that he got from her, that he’s now able to pass on to both Emilia and Garf. On thate note, I must say… I really do miss Rem, and its comforting to see that Subaru hasn’t forgotten about her. She’s still very much a core character in this story, even if her role in this particular arc is nothing more than cursory.

Callbacks to Rem aside, the big thing that Subaru did this week was finally use the Sloth Witch factor, which… Honestly was pretty darn badass. While I did always like that Subaru was relatively human when compared to everyone else in the cast, I think we’re past the point where Re:Zero is a simple Isekai and we’ve moved into the realm of general fantasy. Having a protagonist who can actually do SOMETHING fantastical, helps the story more so than hurts it, I think.

It was getting old, seeing Subaru constantly getting himself killed and relying on his allies more so than himself. Granted, Subaru’s little use of the sloth factor doesn’t make him truly independent, but he can at least contribute to the battles he’ll fight, a bit more directly now. With both his earlier Shalmac ability, Puck (who seems to still be around?) and now his Witch factor, Subaru’s steadily gaining some solid power now. And of course, lest we forget, he’s still got Revival from Death, which is ultimately pretty darn powerful by itself. 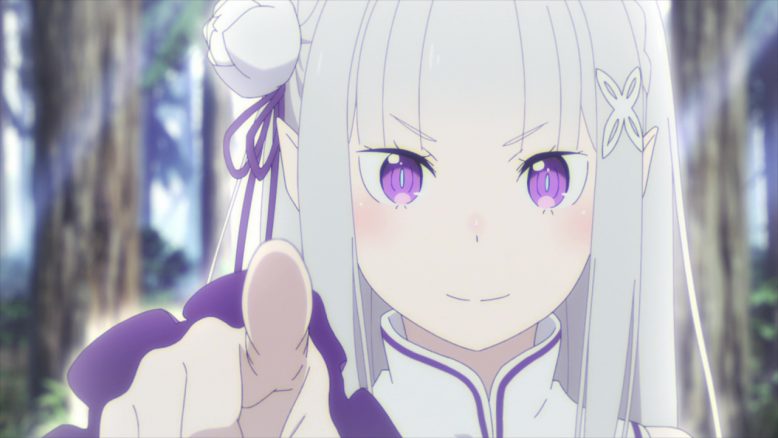 Now, while Subaru’s growth has been interesting to see, its Emilia that I find myself marveling at the most this week. There were some big bombshells dropped at the end of the episode, which makes the excitement for next week all the more intense.

One, Emilia is both the daughter of a witch, and a witch herself. Two, she’s not Satella nor does she seem to have Satella’s powers, rather she calls herself “The Frozen Witch”. Three, it seems like Emilia was “born” inside the very forest that we saw little glimpses of in her flashbacks. Four, Emilia’s trial is NOT her confronting her past, its her going toe to toe with Echidna.

All of these things, they raise so many questions and tantalizing possibilities. Is Emilia a descendant of THE Satella? The original one? Or is Emilia ultimately someone who becomes Satella? Are Satella and Emilia actually perhaps actually two separate entities? Sisters perhaps? Was it really Emilia as Satella that appeared in the Witch’s Tea Party?

Just when I thought I understood the Emilia/Satella connection, these new facts definitely cloud everything right back up. To compound things, there’s still the question of what Emilia’s past is, what she is exactly. And of course, then there’s Echidna. Judging by the last scene of the episode, Echidna is none too happy about how Emilia has changed, and potentially taken Subaru away from her. 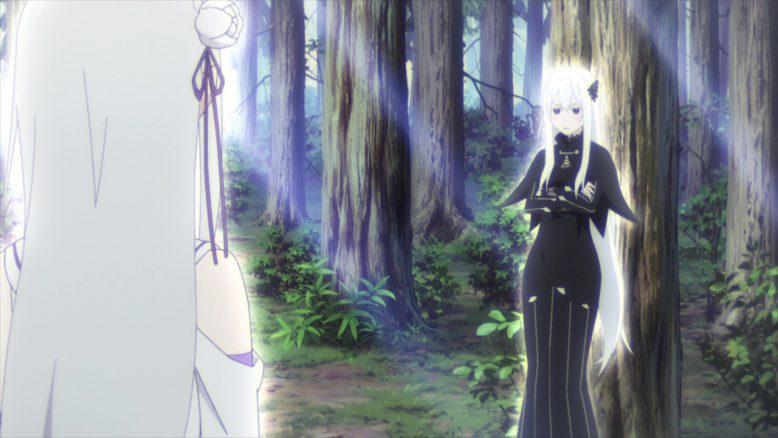 There can only be one grey haired witch in this show!

Where the story goes from here, is what I care about more so than what we got this week. I care about Echidna vs Emilia, and I care about Emilia if only because her story will lead to larger answers to the mysteries of the larger story. And of course, we’ve still got a good chunk of the season left, with both the Great Rabbit and The mansion still waiting in the wings. The big question then, is how much of the story will see resolved by the end of this season. Is Re:Zero Season 2 Part 2 going to end with Subaru and company just making it out of the sanctuary? Or is this whole part of the story going to properly resolve, with Season 3 being more of an open ended question?

My hope is that, whatever we get, its just told with the same quality and skill that the show and those behind have displayed thus far. Re:Zero 2 has absolutely driven its franchise forward with this season, and its as we approach the end, that the stakes for both the characters and the show as whole, grow larger and more important.