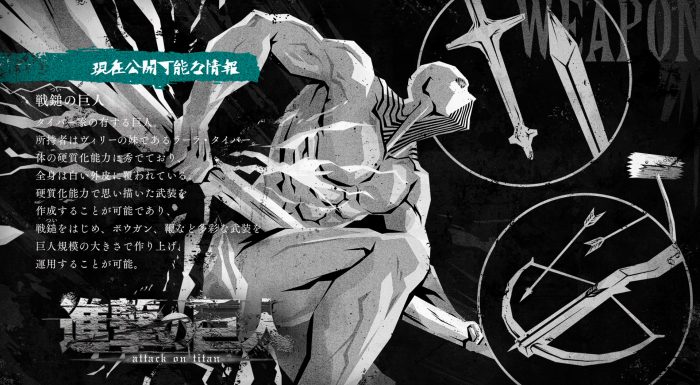 Now this is more like it. This week’s episode, the sixth episode in the final season, is what fans like myself were expecting to see seven weeks ago. Bombastic action, interesting political implications, motivations shrouded in mystery and of course, seeing a ton of the cast that we’ve grown to love over the past few seasons return. Shingeki no Kyojin finally put its foot on the gas this week, after five episodes of just barely inching along.

The question then, that I had going into this episode, was most definitely: Why? Why spend four weeks basically developing Marley’s Eldian internment area only to destroy it this week. Why spend the time building up a character like Willy, who was going to die pretty early in the story any way? Why dedicate all that time? Why?

Why indeed. While I think I got the answer this week, I don’t exactly think the effort and time was worth what we got, at the end of it all. I realize what the intent was now, sure. Develop Marley, make its Eldian people sympathetic, make Willy and the military the propaganda pushing villains, and make Eren’s monstrous actions feel “horrible” to the audience. Eren is killing innocents! Eren is ruining the lives of all these normal people that have done literally nothing! Remember these warrior candidate kids? Look, Eren just killed two of them without even blinking! 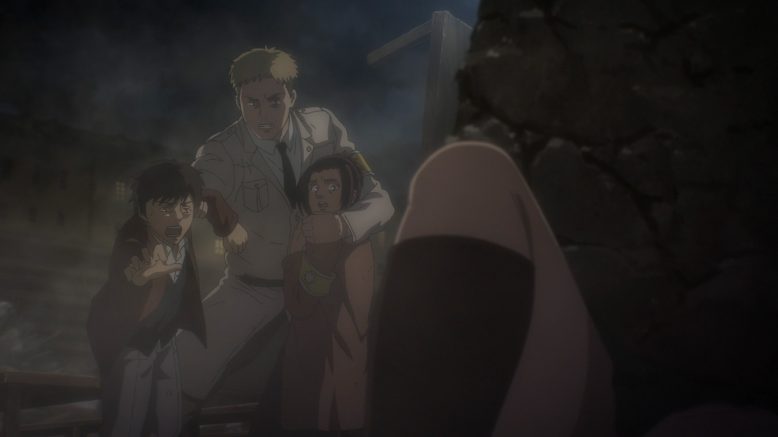 It had to be the megane girl who died of screen eh?

Incidentally, When Eren basically wrecked havoc on Willy’s little announcement, and then proceeded to battle the War Hammer Titan, I found myself rooting for him. Not him killing civilians of course, but him just taking the fight to Marley. Seeing Eren’s growth as he basically took on the War Hammer Titan AND the military, was just fun and exciting. Seeing Mikasa come in, in the nick of time? That was badass.

And let me just say, man has Eren matured into something impressive, from a fighting and tactics stand point. The Eren, who rushed into things before, is now a warrior that coldly and calmly handles every situation that comes at him. The way Eren quickly formulates a plan and incapacitates the Hammer Titan? That was something that just spoke a thousand words about how far he’s come. 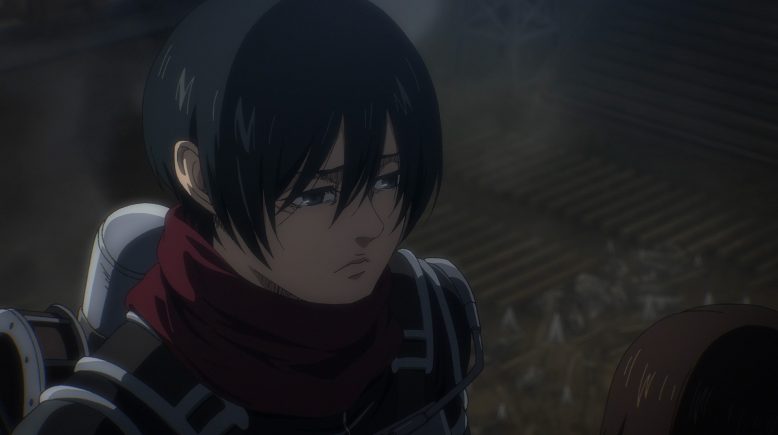 And Mikasa? Man has she changed a well. Mikasa, the woman who had tunnel vision around Eren and her friends, who didn’t care who she hurt in order to protect her own, Mikasa…Condemns Eren’s actions! She tells him that he’s killed innocents, including children and tells him that these are unforgivable things. While Eren’s transformation into a sociopath is certainly intense, its the more human side of Mikasa that I find really really intriguing.

The truly remarkable thing, however, is the fact that it’s all done with such minimalism. Some pointed dialogue, a few key scenes and the same break neck pacing that Shingeki no Kyojin is known for. At times, in this episode, I felt like I was watching a different show entirely. A familiar show, a better show than what we’ve seen thus far. Then, of course, we’d jump back to the Marley side of things, and things would slow down for a second or two, before the show wisely kicked it back up a few notches.

The focus was, ultimately kept exactly where it needed to be; he ongoing battle between Eren and the Hammer Titan. The entire fate of Paradisio and more than likely this entire world, now hangs in the balance. Eren’s attempts to both attack Marley’s leader and eat the Hammer Titan being vital to giving his side the advantage it needs. 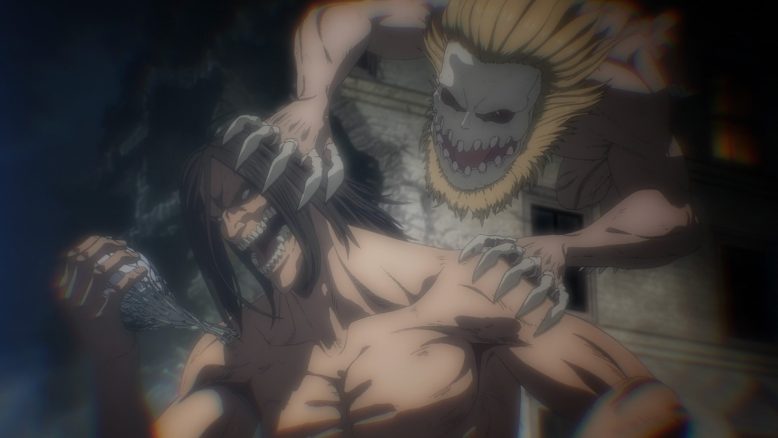 Surprisingly, Eren actually seems like he’s ready to come out on top as the battle progresses. Yet, in classic Shingeki fashion, however, things are rarely that simple and just as Eren starts to get the upper hand, we get the Jaw titan emerge with a surprise attack. That surprise attack, of course, is then followed up by yet another “in the nick of time” save by none other than the biggest badass of them all, Levi Ackerman. Simply fantastic entertainment.

Now, as this scene’s conclusion played out, I couldn’t help but find a sort of dissonance between what the story wanted me to feel, and what I WAS feeling. As the Jaw Titan dude himself starts screaming about how scary these humans coming to kill him were, I couldn’t help but get excited by how awesome it was to see the Paradisio crowd go to work.

Maybe the show is trying to make me feel like I’m the monster for being so excited and enthralled by all this violence, but I don’t really think its succeeding at that either. Its certainly trying, but in order to pull something like that off, the show had to really nail down Marley and its characters from the get go. Isayama spent most of his story developing Eren’s side of this conflict, and then spent a much smaller amount of time trying to humanize Marley. 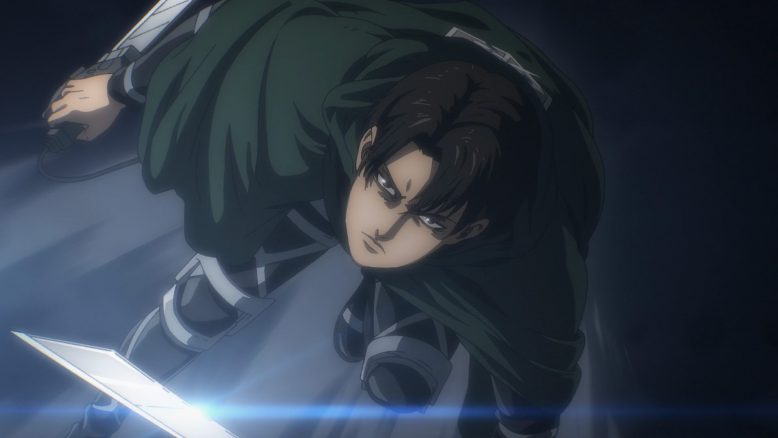 Levi, not ready to yield his badass throne to anyone.

Which ultimately, leads me to believe that the switch over to this whole “horrors of war” idea is a pivot in the story, rather than anything that was truly planned from the beginning. Seeing it that way, I think I can ultimately forgive both Isayama and Shingeki for TRYING to say something more than they had before. It may not have been successful, and it may not be the reason I’m enjoying this show, but I can at least appreciate the attempt.

Thankfully, if we continue to get episodes like this, with awesome battles that have huge consequences for the overall status quo of Shingeki no Kyojin’s world, then the whole “war is bad” theme can stay hidden underneath the surface for me. I enjoy what I get from this show on the surface, a popcorn thriller with a ton of interesting characters that are fun to follow, in a rather bizarre world.

If Shingeki can just focus on nailing the surface level stuff, then I think the deeper meanings of the show can exist for those who really want that stuff. Shingeki started as intense, horror story about humans trying to battle huge hulking titans that were eating them, and Eren now becoming a monster against a world that’s always spat in his face, can still work as an idea. 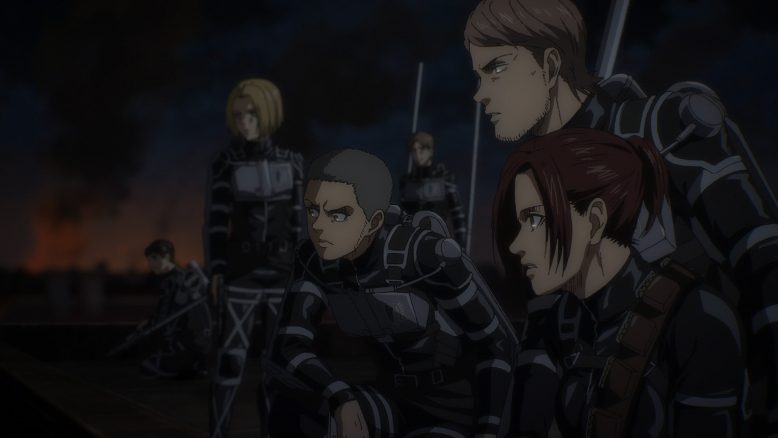 How can you not support the badass cool ninjas in black?

What will ultimately make or break this story and Isayama-sensei’s ambitions, is how he handles Eren’s motivations and overall plan at the end. Once all the carnage and pain is over with, and once this story is done, what meaning this final leg of the story has, will ultimately depend on who the villain of the story is. Will Eren emerge a troubled anti-hero, or a villain that just went too far? To that very idea, I will say this; I’m definitely curious to find out.