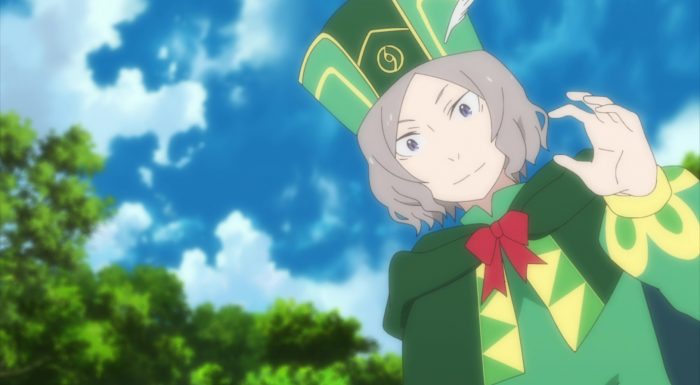 I’m honestly kind of shocked. Shocked, by the fact that this week’s episode of Re:Zero 2 is anything less than stellar. For the first time in what seems like forever, we have an episode of Re:Zero that doesn’t hit it out of the park. There are good parts, there are bad parts, and while the story isn’t super worse for wear, there’s definitely a pivotal scene that just doesn’t land as well as everyone behind this show would want it to. No show is perfect, and I think, this week, we found out what Re:Zero’s Achilles heel really is.

Surprising no one that’s been reading my thoughts on this series, the big issue I had with this episode had to do with Emilia. Not her specifically though, as I think Emilia is actually getting some solid development that’s building her into a rather interesting character. No, the issue with this episode, is that it just couldn’t sell me on the Subaru/Emilia romance, one that the show, its story and its writer seem hell bent on pushing forward.

Here’s the thing, I should love this. Too often in anime, romance is either never addressed  at all (in fear of freaking out the fans), or it just isn’t the focus of the story. Re:Zero is already a brave franchise in that its at least trying to push certain pairings into cannon. The issue then, is less to do with what the pairing is, and everything to do with how its been executed and developed. 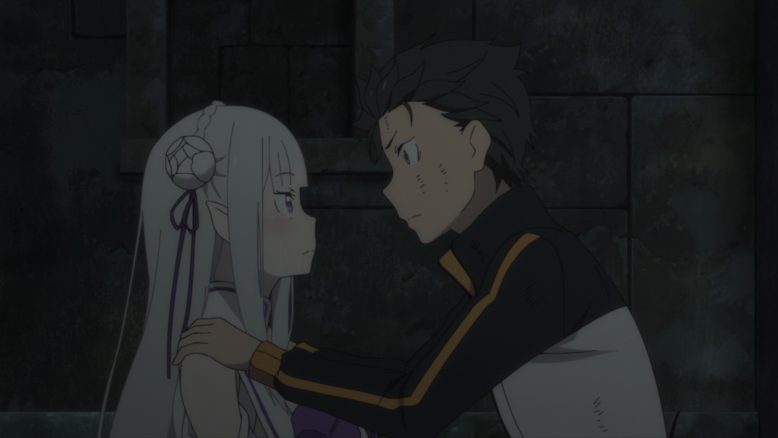 “Emilia, its a meme at this point. You should know that I love you…”

Simply put, I just don’t see Emilia and Subaru’s relationship in the same way that the show and story does. Its not even close to the point where the two of them would share an intimate moment, let alone after a shout filled argument. It also didn’t help that the speech that Subaru gave Emilia was a complete plagiarism of Rem’s much more heartfelt one. This show has convinced us of how much a character can love and adore another character, romantically, and comparing Subaru and Emilia’s moment to that, well, it just doesn’t hold up.

And Let me be clear, I have no issues with Emilia and Subaru being a couple. That’s fine, even if I prefer Rem for Subaru. Sometimes the heart wants what it wants, and no amount of logic can really change that. And of course, there are a lot of reasons why Subaru HAS to love Emilia, as the entire backbone of the story and its plot hinges on that. Emilia being Satella, the one who’s given Subaru his powers, and then Subaru trying to save her and all of that? It can’t work if Subaru isn’t totally in love with Emilia.

Incidentally, its actually because of that fact, that the execution failing on this particular point, is such a big deal. Emilia and Subaru’s romantic moment needs to be earned, by solid storytelling and moments that actually sell the audience on the idea. There’s a genuine attempt at that sure, what with Subaru actually FINALLY mentioning Emilia’s faults and not seeing her as this perfect ideal woman that has no flaws. 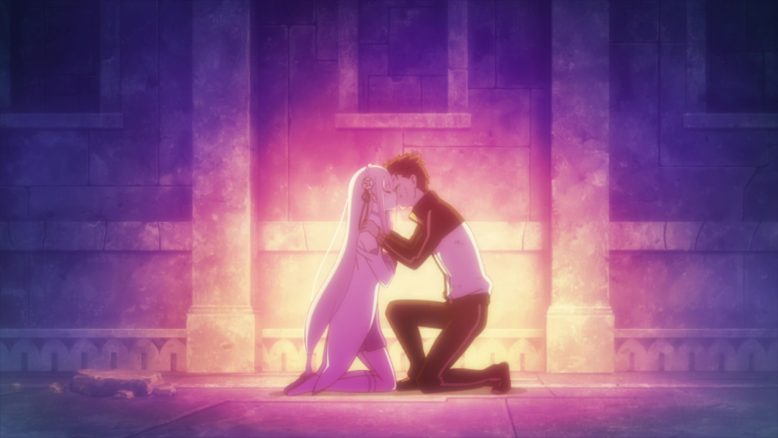 “Emilia and Subaru sitting in a….”

But I have to say, much like Emilia, I was just not convinced by Subaru’s whole speech. I love you because I love you is as dumb as it sounds. In a show that’s shown Subaru to think really deeply about things, and articulate himself in rather impressive ways, its just sad that the big gambit that he plays here is just repeating that he loves her, and that’s that.

And its this grand scene, that leads to a kiss between Subaru and Emilia, that then pushes Emilia to move forward? Err….?

Now, you could argue that Emilia was emotionally weak and Subaru took advantage of her (a reasonable interpretation), but I personally don’t think that’s the intent of the scene. Its supposed to show that both people have let everything out and then finally connect, but I still keep thinking back to Rem’s big confession and how much that landed without any kiss scenes. 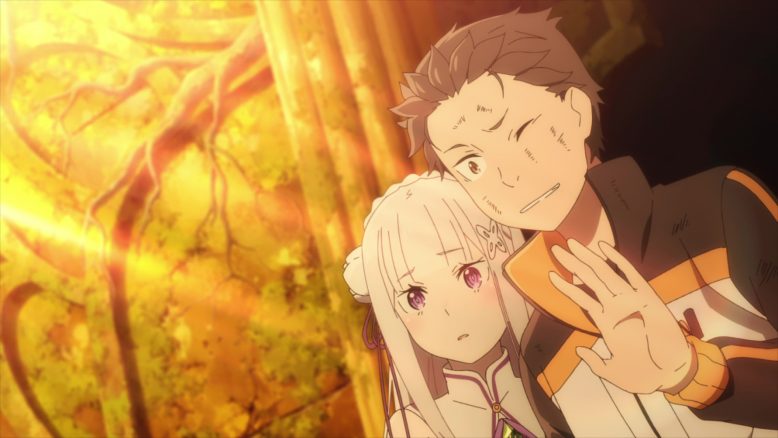 Was it worth it Subaru? WAS IT WORTH THE DAMAGE to the overall story??!?!?

A kiss just feels like it needs to follow a really strong moment, after a ton of stuff has happened between Emilia and Subaru. In terms of the canon timeline of the show (non-reset based), Emilia and Subaru have been around each other a lot less than literally any other character. I just don’t see the chemistry here, as I think nearly every other character has better chemistry with Subaru at this point.

Speaking of which, lets talk about the highlight of the episode; Otto’s backstory and power reveal. It says something, when a show can make a flashback be the best thing about an episode. And this flashback? It really elevated Otto as a character, and did it all in the middle of an intense chase scene. Digressions like this one often frustrate me more than not, but I have to say, this is one of those rare occurrences where I felt engaged and excited.

A big part of keeping a viewer engaged during a flashback, is the pacing. The episode beautifully balanced the thin line between backstory scenes and drip feeding as resolutions to the little battle between Otto and Garfiel. Ultimately, despite the detour, the story kept moving forward which is what is most important in situations like this. 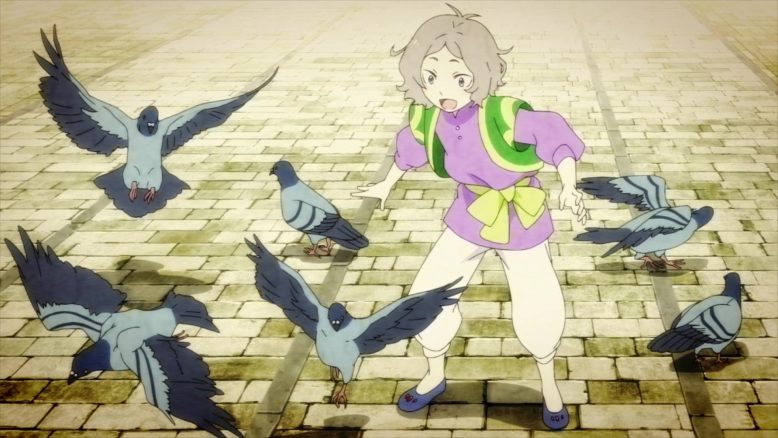 Otto looking awesome even as a kid!

As for the backstory itself? Well, it was just the thing that Otto needed. First of all, its worth pointing out that everything about this backstory, MADE sense and felt organic. Little things the show did earlier,like having Otto tell Subaru about Patresche (the ground dragon that Subaru rides), made this backstory just really feel like it was always there, and we (the audience) just didn’t know about all of the pieces. Otto talking to animals and being able to understand them is surprising, but it doesn’t feel cheap in any way.

Not only that, its a power that honestly doesn’t add too much to the story, but rather adds a lot to the character. Giving Otto this power doesn’t magically make him  win against Garfiel, because honestly, Otto is still Otto, even with this power. Instead, what it does is explain a lot more about why Otto  is the way he is, giving flavor rather than a power up out of nowhere. And this? This is character development and storytelling at its best. Elements that service a character rather than the larger over arching story, are perhaps one of the hardest things to do right in long form storytelling. Yet, Re:Zero and Nagatsuki-sensei just made it look effortless here. Its just sad that this awesome moment is paired with a scene later on in the episode, that just isn’t as good.

Let me end by saying that I still love Re:Zero 2, and I still think its probably going to be one of the best anime of the year(if not the best). That said, I’m not so biased as to not critique something I love when I see it stumble. Especially since its a show like Re:Zero. When a show as good as Re:Zero stumbles a bit, its a lot more noticeable. The rarity of something not landing makes Its news. But at the same time, it speaks to the overall strength of the show and this episode even, that the stumble doesn’t cause Re:Zero 2 to fall flat on its face. 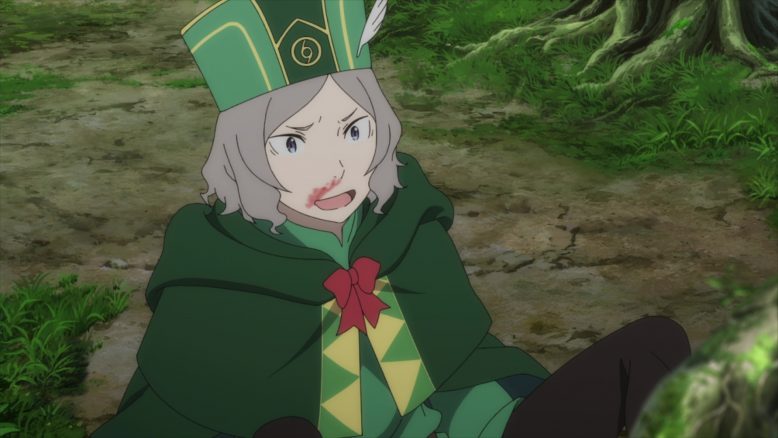 There’s still a ton of momentum in this story after all. What secrets lie inside Emilia’s memories? Why did Subaru suddenly leave in the middle of the night? And then there’s of course, Garfiel to deal with still. With a healthy chunk of episodes left, I imagine this little stumble will be forgotten in the grand scheme of things.

At the end of it all, I really do love this show. I love it, not just because “I love” it, but because of the fact that its been so good to me thus far. I’m willing to give it a pass for the occasional misstep, as long as there aren’t too many of them. And of course, the fact that Re:Zero 2 feels like such a labor of love from those involved, well? That helps a lot.

This is a show that continues to just deliver extremely long episodes, WITHOUT an opening or ending sequence, week in and week out. That in itself is amazing to see as a fan, and this week, as uneven as it was, has not dampened my expectations or belief that this show will continue to deliver. That’s a rare thing indeed, in today’s anime industry landscape.