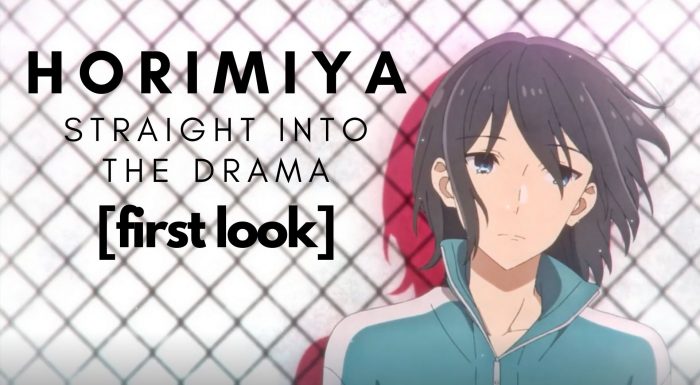 Many high school students portray a certain image their peers are sure to build assumptions around. Hori dresses and talks like a popular girl at school. She’s beautiful and often the center of attention for many guys.

Her friends seem to always assume her daily rushes home translate to seeing a boy, or spending time with other friends outside of school. Nothing could be further from the truth. 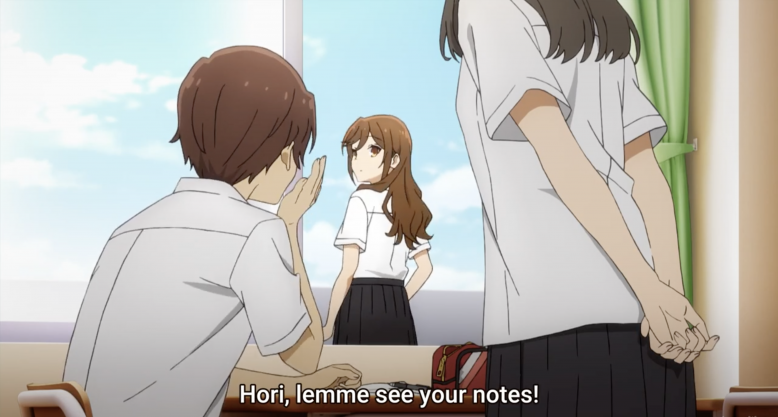 As a straight-A student who serves on the student council, Hori’s dedication to academic success often gets overlooked. Although it only happens once, her classmates’ request for her notes and her compliance to share them conveys their dismissive attitude toward her academic diligence and their seeming inability to recognize how much they rely on it in one stroke. 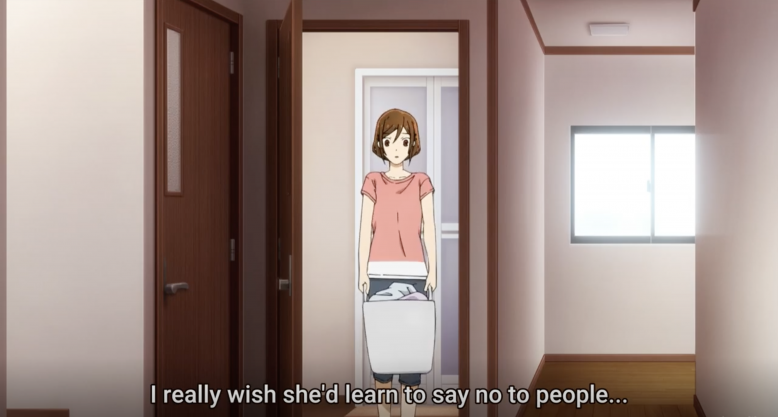 Hori drops her phone in the first few minutes of the episode. Class has been dismissed for the day and everyone is on their way out. A reticent boy named Miyamura picks it up and hands it to her.

As he leaves, some classmates crowd around Hori gossiping about whether he’s a lazy and gloomy otaku. Nevertheless, Hori quickly rushes home to take care of her little brother and common household chores but not before picking him up from school and passing the karaoke place her classmates invited her to.

Yet, she doesn’t seem to mind all that much. She receives a call from her mother who’s putting in overtime at work. Hori dismisses it as a normal occurrence to be expected. 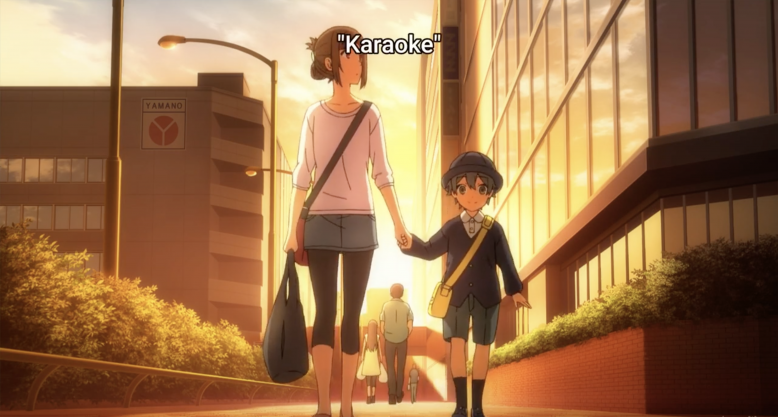 This interaction provides our first look into Hori’s character. She’s filling the role of a parental figure for her little brother. She’s responsible, has little time to think about school gossip, or hanging out with friends. It also leaves the question, where is the father?

The story provides no clear indication. Is he not in the picture? Is he dead? Regardless, the absence of an answer builds a clearer picture of Hori as someone who’s had to grow up faster than her peers. 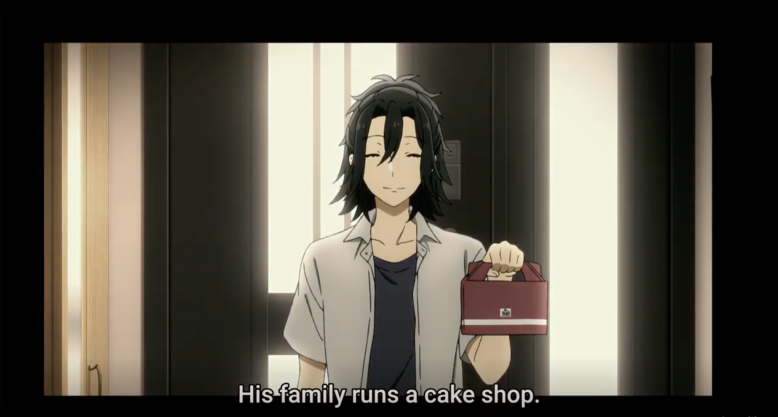 One day, that reticent Miyamura shows up to her house with her brother. He’s bleeding from a run-in with a scary dog. Hori doesn’t recognize Miyamura though. He’s rocking his hair back along with several piercings. It’s the last thing she expects and completely destroys the preconceived image she had of him.

Everyone at school assumes he’s smart and likes keeping to himself. Nothing could be further from the truth. He’s cheery, ditzy, and quite bad at homework. He’s impulsive, but has a kind and soft soul. Her brother also likes him a lot. She takes a liking to Miyamura and invites him back over the next day.

STRAIGHT INTO THE DRAMA 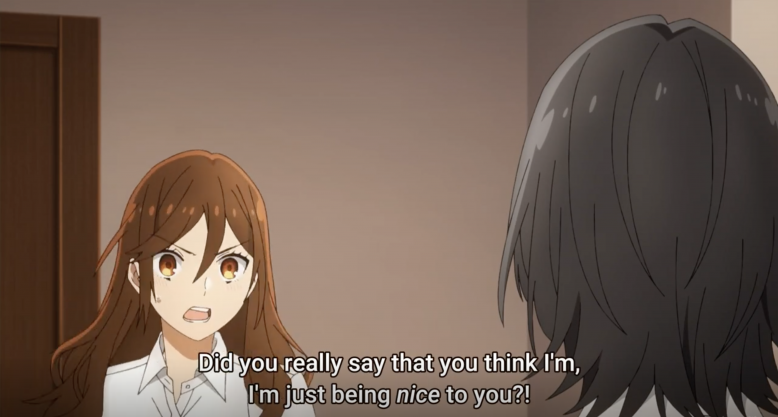 This is roughly where the show transitions from slowly introducing characters to blazing a trail into love triangle territory. Classmates take notice of the two hanging out. One boy confronts Miyamura about it. He wants to ask out Hori. Miyamura helps him out and takes Hori’s brother back home for her while she confronts the love confession.

In the next scene, Hori storms through the front door. She’s livid with Miymura. She confronts him, asking if he really thinks they wouldn’t make a compatible couple to which he confesses his misgivings. He had thought he was more of a bother, that he was tarnishing her reputation by being around her. As we’ve covered, Hori could care less. She expresses that she wants him around. 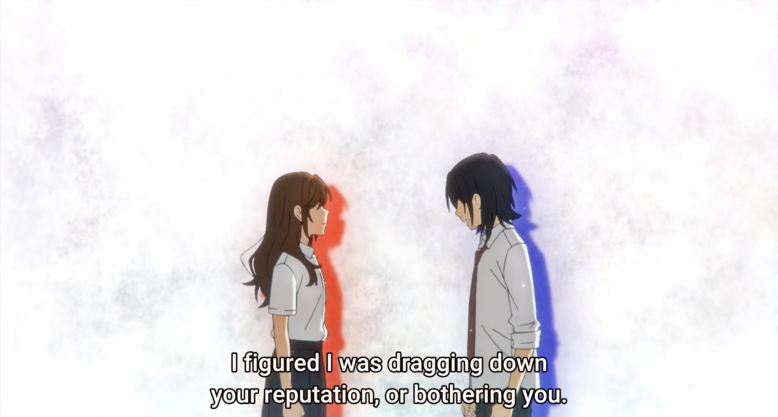 The episode ends around here but has overall provided some very heavy insights.

Firstly, because Hori’s mom is rarely home, Hori must lead the household. That’s tough to do alone, especially for someone who’s still a child herself.

Secondly, Miyamura’s involvement provides her with a pillar of stability. Her mother relies on her to take care of little brother. Her friends rely on her for her notes. All the while, she has no one.

Thirdly, and intriguingly, audiences can gleam Miyamura may be in a similar situation.

He seems to talk to no one at school so probably has little to no meaningful social involvement with others, and the only information we get about his homelife is that his mother says he has too many piercings, most of which he gave himself with a pin needle in middle school. 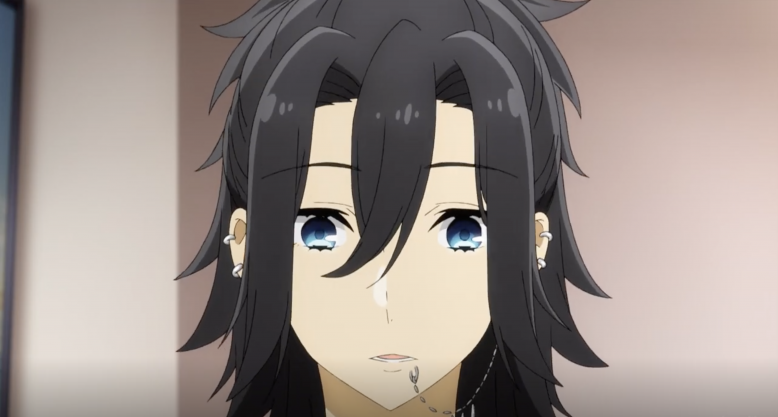 His parents also run a cake shop. Even more intriguing is his extremely apologetic nature. He himself admits to being gloomy and it being best for everyone if he stays out of the way. Why? This curiously causes us to wonder how he wound up so in-evasive his first reaction to any situation is to stay out of the way.

These responses could result from Japan’s strict culture censuring self expression through body modification and overall aesthetic differentiation. Hori accepts him for him though. 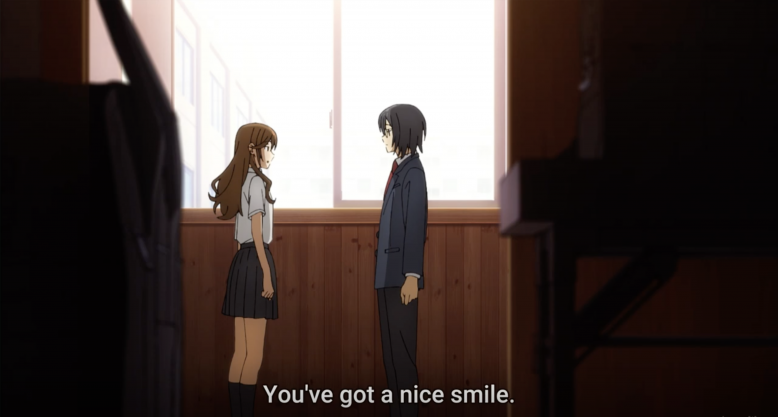 She’s not happy with her life either. The way she looks downtrodden about missing out on adolescent fun at karaoke, with friends after school, blankets the first episode with a tinge of loneliness but at its end, with a hope of adding excitement to life. How do we know so far? At least one thing makes both characters happy. They’re glad they’re the only ones who get to see each other’s true sides outside of school. Now we’ll have to wait and see what the next episode brings. We need answers. 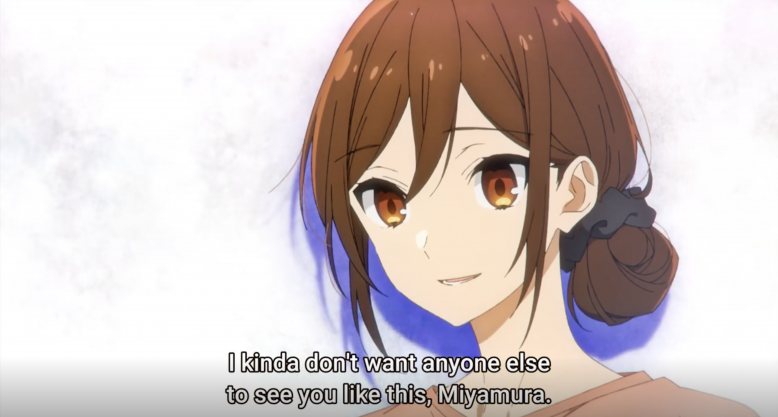 Horimiya doesn’t play coy when it comes to demonstrating its ability to build romantic tension between its characters Hori and Miyamura.  It shows promising signs that it’s capable of developing robust characters with layered depth and meaningful interactions and be just as much about love as finding oneself as the characters grow past high school and into adulthood.

There’s a sense that dealing with personal traumas and sensitivities will come into play. We can only hope those don’t cause a damaging interference as Hori and Miyamura build a stronger and closer bond.