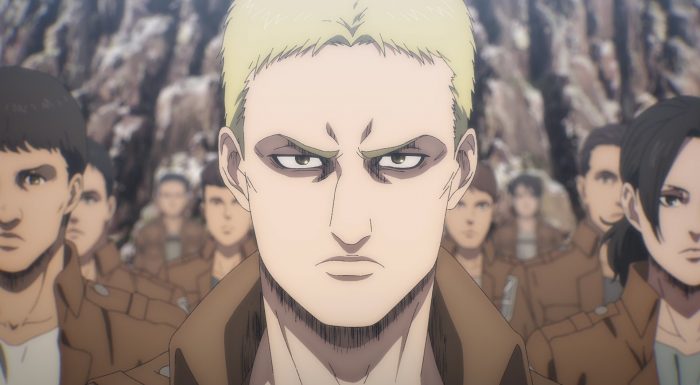 And with that, we have the last few pieces of one of the many puzzles that Shingeki no Kyojin has setup, and with it, some clues as to what the overall story is here. Its a strange thing, really, to find out that, at the end of the day, despite how complex and intricate this show has become, the core idea behind it is rather simple; War is terrible, and its humans that seem to be their own worst enemy.

In some ways, it seems like this has always been the underlying backbone of Isayama-sensei’s storytelling, no matter what people may label his decisions as. Its hard to look at it any other way, at least for me. Shingeki is screaming at the top of its lungs, with its bombastic action, its call-outs to some of the worst crimes in human history, and in how it seems to show the contradiction of heroism in the context of war. 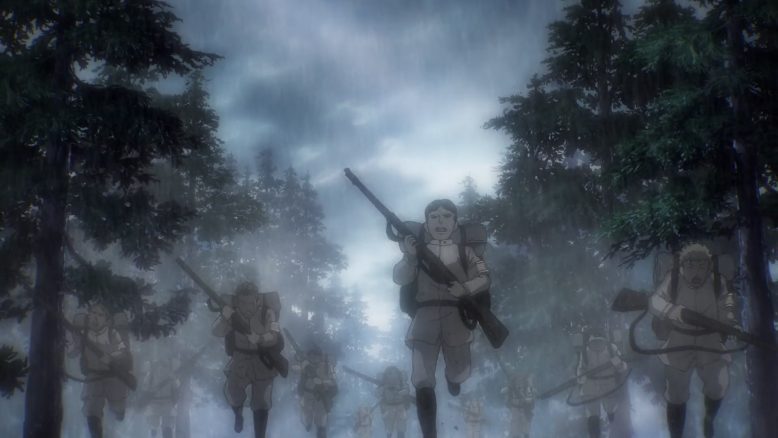 And this isn’t exactly something new. Shingeki did this before, by showing just how messed up characters like Praxis and Erwin were, in the previous seasons. How these so called “heroes” basically didn’t amount to much at all, beyond causing a ton of death. Sure, you could look at the praise that Erwin got from those around him as an endorsement of hs actions, but I honestly never saw it that way. And now with Reiner, and his whole backstory, I’d say its unmistakable that the slant on war and humans that Shingeki has is anything but a positive one.

Reiner’s entire life is one of tragedy, where he’s been forced by his circumstances and society to really just dehumanize himself in order to survive. In much the same way that Eren had to become a literal monster in order to survive in a world of monsters, Reiner too had to do so, on a more psychological level. Its interesting how Reiner and Eren are mirror images of one another, two sides to the same coin. 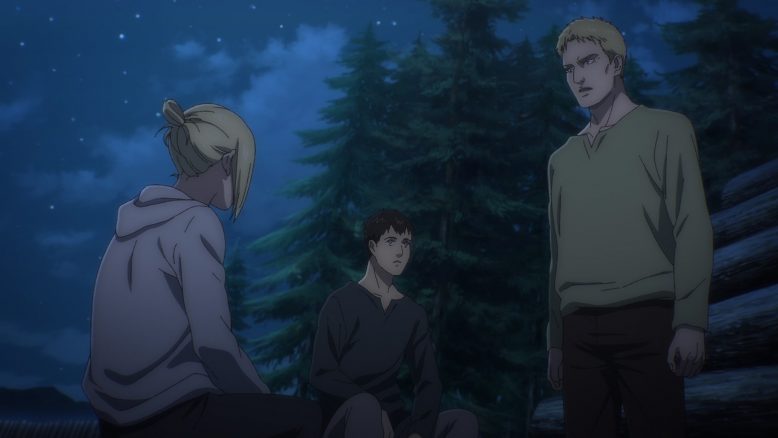 The growing transformation of Reiner

Both were weak, both wanted to do great things, and both wanted to see those that they cared about be happy. While Eren’s motivations were more selfless, Reiner, in his desperation, has clearly deceived, hurt and betrayed others. Its clear who the antagonist is in all of this, as tragic as it may be.

Also worth noting, is the fact that both characters also had to adopt rather extreme measures to do what they needed. And in the end, both also found someone that they could relate to and thus took pity on. In Reiner’s case, he met Eren and helped him through some of the difficult training in their cadet days. 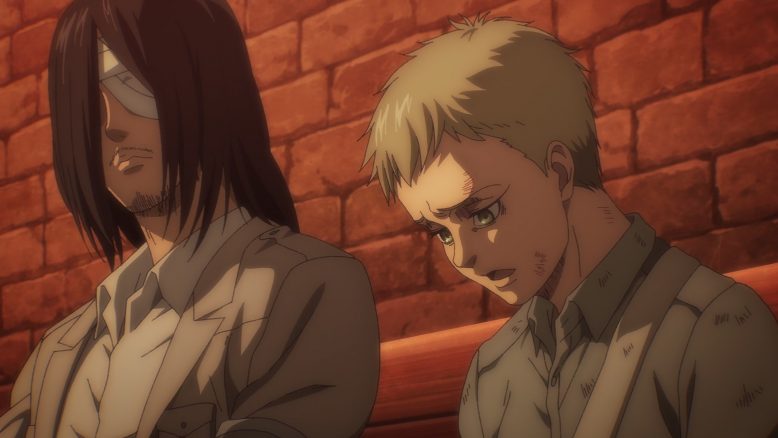 Now, what’s fascinating is that Eren, is seeing that same situation play out with regards to Falco. Falco’s situation is similar enough to Misaka’s and Eren’s, so its no surprise that Eren is empathizing with the kid.

What IS surprising, however, is the fact that Eren’s been in the thick of it all, and has infiltrated Marley already. When did Eren make it inside? Was it during the last war? or Have the Paradisio people been in Marley for a couple of years now? Gathering information and planning the big counter attack. 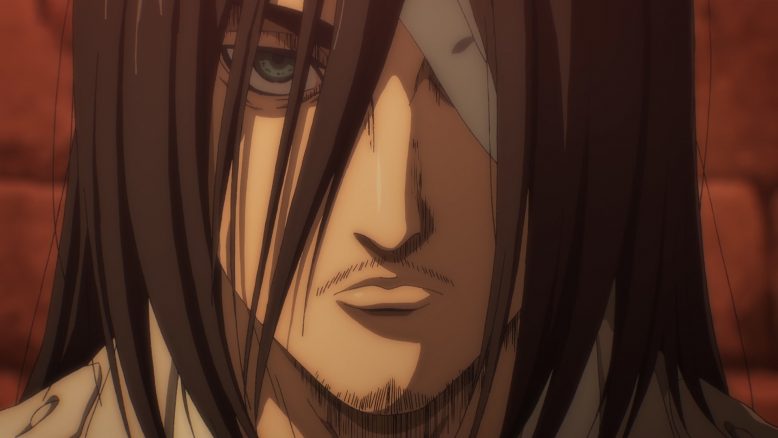 Hobo Eren is definitely a thing.

In any case, with what Eren’s seen thus far, its clear that his brethren inside Marley have it pretty rough as well. The side that Eren grew to hate, that ruined his life? Well, its clear that they aren’t doing too well themselves. So then, what kind of conclusion does Eren draw from all of this, how does he react to the fact that human society, no matter where it is, is pretty messed up.

That’s the one open question now, as everything else seems pretty much set in stone. Paradisio and Marley are going to war, and its quite clear that Marley is underestimating just how far Paradisio has come. They’ve managed to keep a complete lock on information about themselves AND have already infiltrated the enemy. Despite the fact that Marley has more titans, this war may not be as one-sided as they may think. 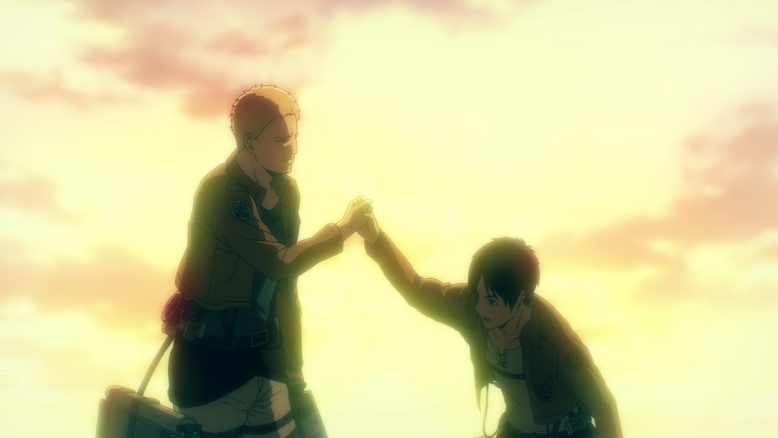 Where it all began? Perhaps?

And, with that said, Its finally time for Shingeki to leave behind all the world building, and now jump into the central conflict. All our characters have been setup, their conflicts and reasons laid bare, and the stalemate established. So now, its clear that Eren’s side is going to make the first move, and when that happens seems pretty obvious too.

The big question, for me, is where the battle is going to take place. Is it really going to happen on Paradisio? Or is Marley going to be the next big battle ground, and the main location for the final leg of the story. Big question indeed, and one that I think we’re going to get an answer to, soon. 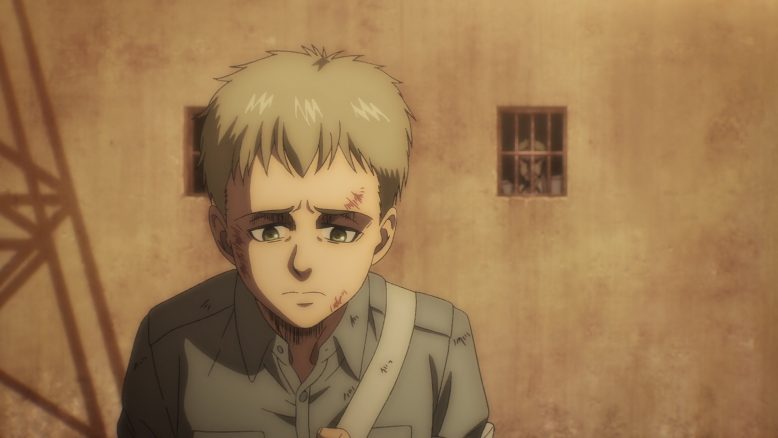 Reiner creeping on the kids as he contemplates Suicide? O_o

In any case, when everything is said and done, I suspect that these three episodes will be remembered as foundational ones. Episodes that felt slow, and perhaps, even a bit weak, but ones that will ultimately serve as the backbone for what we’ll get in the rest of the season. I can’t wait to see where this all goes.