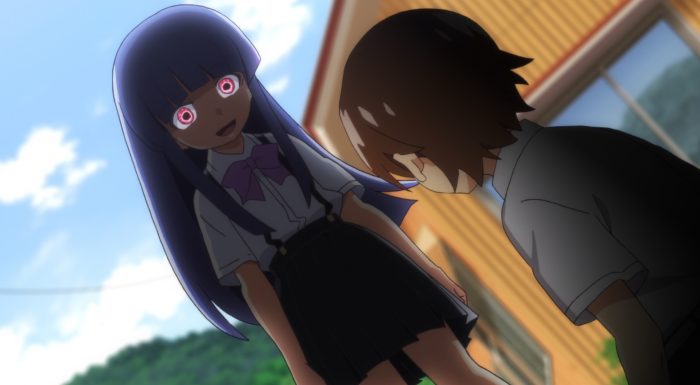 If nothing else this was another impactful episode. I’m personally not sure where we are going, but clearly it is going to be a ride. One again Keiichi is in the middle of things and honestly I’m not able to predict a happy ending here. While I don’t think checking out a religious storehouse is a big deal, apparently that’s enough to doom Keiichi. At the very least everyone seems to be gunning for him when it comes to seeking answers. Though in part I’m sure it relates to Tomitake and Takano booking it out of there in a stolen van. I’m not 100% sure they stole that van because they were afraid. Part of me could see Takano just pushing Tomitake to do it as a young-ish couple thing. Probably isn’t that, but it would be amusing. 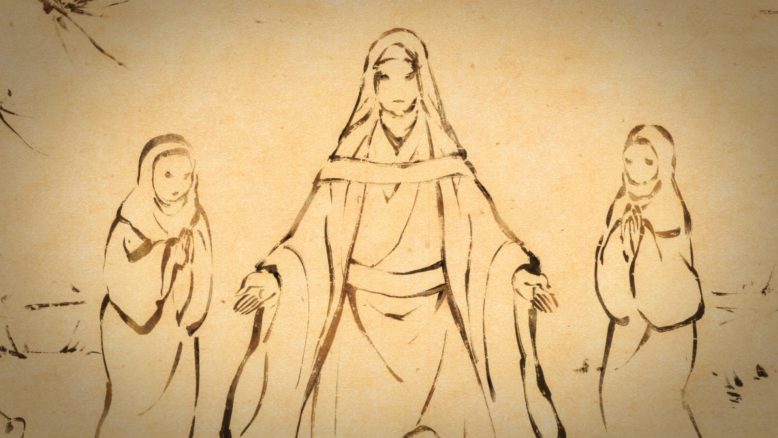 Nothing like being doomed by a trip you weren’t even interested in taking in the first place. Keiichi gets dragged off to check out this creepy place, gets freaked out with a scary story, and basically told he’s potentially marked himself for death by attending. Then things continue to get more unsettling as time goes on. All of it wrapping up with one of his friends acting incredibly weird and likely not helping his mental state in the slightest. It is a rough situation since he naturally doesn’t have a clue what is going on here. What he does know is that something bad has happened. And he is pretty confident that something bad will happen to him.

The stories about the town’s history are certainly unnerving. Of course they could either mean something or absolutely nothing. There could be truth to what Takano has dug up or it might honestly just be made up. The option of the truth being a mixture is there as well, but no way to know for sure. Obviously if the village has literal human-eating demon blood in their veins that could be an issue. That would certainly explain some weird behaviors. But it could be something else entirely. All we know for sure is that it didn’t help calm Keiichi down. And really things continued to get so stressful that he just lost it at Shion over the phone. 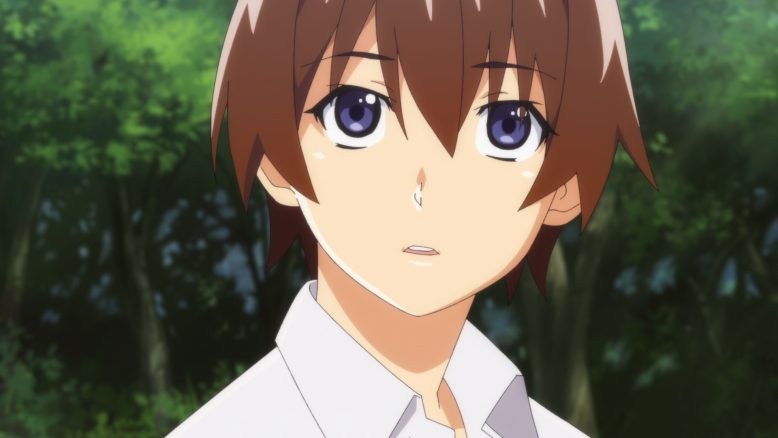 The situation with Rika was also pretty darn out there. She just lost it on Keiichi after he started on his ‘cat talk’ discussion. Definitely a pretty shocking scene. Certainly it just makes everything else just feel more dire. Although the meaning of her words is up to interpretation. At the very least glowing red eyes is concerning no matter the topic of discussion. Just a very unsettling moment for Keiichi and one that reveals to him that there is even more going on than he suspected. What is clear is that Rika is a mixture of upset, frustrated, and exasperated. She just doesn’t have any time for Keiichi’s story and seems rather angry. And it probably isn’t because she really wanted him to see her performance. 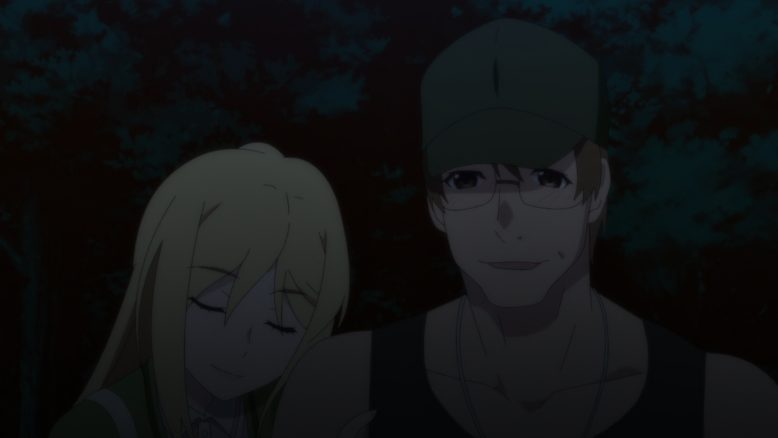 This was another impactful episode. The danger levels aren’t quite through the roof for Keiichi himself, but clearly bad things are happening. Takano and Tomitake are at the very least on the run, the mayor is missing, and Keiichi is stressed out badly. As usual I’ll discuss this a bit more from an original anime viewer’s perspective, but thanks as always for reading this far. 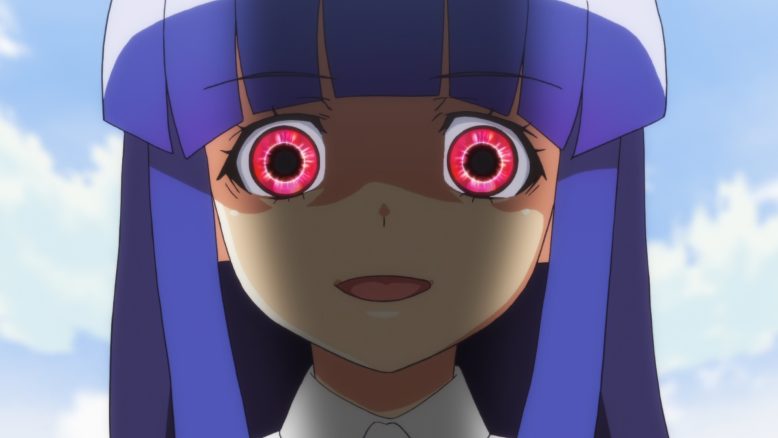 At this point I’m going to admit that I have no idea where we’re going with all this. What was up with that outburst by Rika at the end of the episode? Now it isn’t completely out of character for her to throw up her hands and give up out of despair at her situation. But that’s the kind of thing you’d expect from Rika back in S1 and early S2. It doesn’t make sense for a Rika that has cleared this unfair game to start acting like that. Not when she knows what it really takes to defeat a cruel fate and to achieve her goals.

It’s also bizarre to have Rika talking about Takano being dead when she should know that she isn’t. Rika was talking about knowing the truth of things with Hanyuu, but her actions here reflect her not having a clue. Takano is straight up her main enemy here. I’m not sure why Rika would focus on Keiichi not having seen her dance either. Going into the storehouse is not the key element here. Takano’s plot is going on regardless of whether he goes in there or not. Shion’s downward spiral was going on before that point anyways. Even if we count a possible twist with Shion not being the crazy one here, Rika should know what’s up. Not sticking with her friends is going against everything she should have learned. 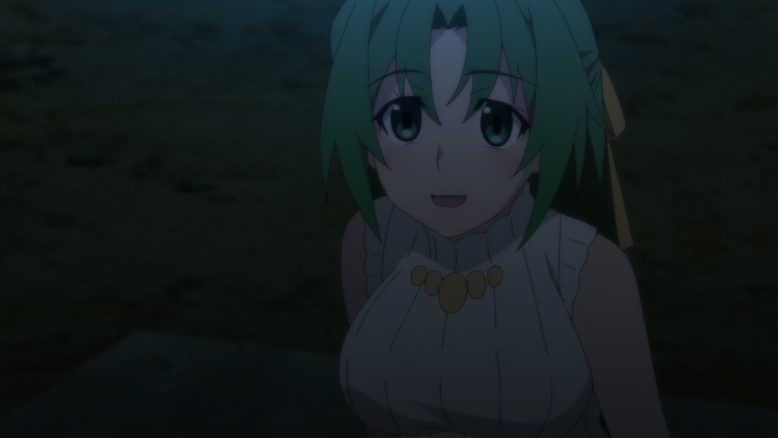 The swapping of Mion and Shion is up in the air. Things are uncertain to be sure with the mayor going missing a full day earlier than usual. Not sure what to think. It’s too fast for Shion to be acting like she normally is in this arc. And even counting the possibilities with Mion I’m not sure what is going on. Why would she go after the mayor? Is it neither of them and the truth is something like Oryou losing it and going on a purging spree? No idea. At this point I’ll just take Shion as Shion and Mion as Mion until the truth reveals itself. Trying to guess too hard or presuming based on the original likely isn’t going to work out too well. Heck, we could see Keiichi do something utterly crazy to put a true spin on this arc. 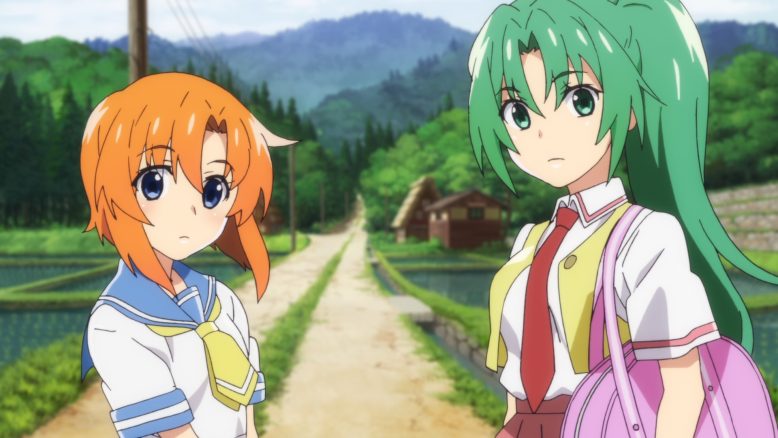