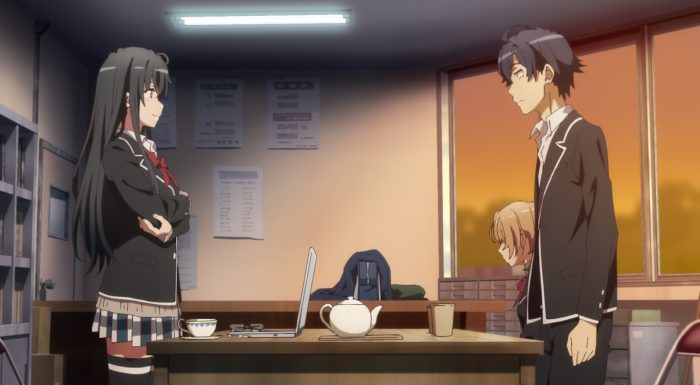 It says a lot about a show when it can basically be a bunch of one on one conversations, and still be extremely engaging. Yahari finally inched a little bit forward this week, and it seems like the pieces are slowly starting to come together for a rather difficult ending. The show doesn’t look like its going to end on a feel good note, and its these episodes that run toward that inevitable conclusion, that truly matter.

To really nail a tragic or even unfulfilling ending, a show really needs to build up to it in a spectacular way. And while I don’t think Yahari has been flawless at that, its certainly setting up things in a way that will make that inevitable end a bit more palatable. 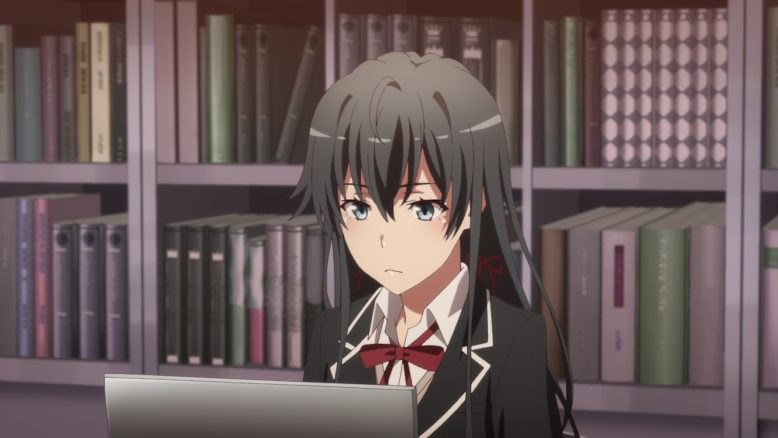 On that note, I think it needs to be stated; The most likely ending is all three of our main characters going their own separate ways. We already have seen Yui’s thoughts on that particular aspect throughout this final season, and now, with episode 5, we also have Yukino’s side of the story.

Its actually really sad, but both girls seem to believe that the best course of action for them, is to end things with the other two. And really, what else could three friends stuck in a love triangle really do? If the choice is between getting hurt yourself or letting someone you care about get hurt, then more often than not, the noble person will choose self sacrifice. 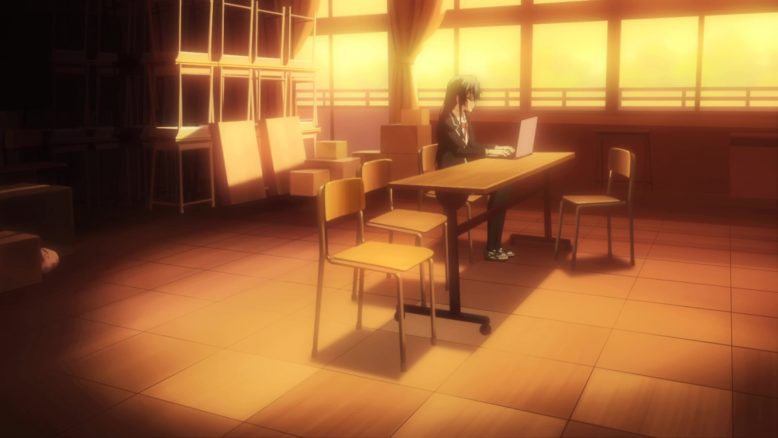 Its clear that both Yui and Yukino are trying to come to terms with the fact that they need to distance themselves from Hachiman. Move out of the way, and let the other girl take him. To that end, both girls are basically feeling their way towards that conclusion.

For Yui, that’s basically spending as much time with Hachiman as she can, before it all ends. As for Yukino? She wants to prove that she’s fully independent in order to finally push herself to move on as well. The issue, of course, is that they BOTH believe they need to do that. And if they both succeed? Well, then that sure leaves Hachiman all alone, and without the “REAL” relationship that he asked to have. 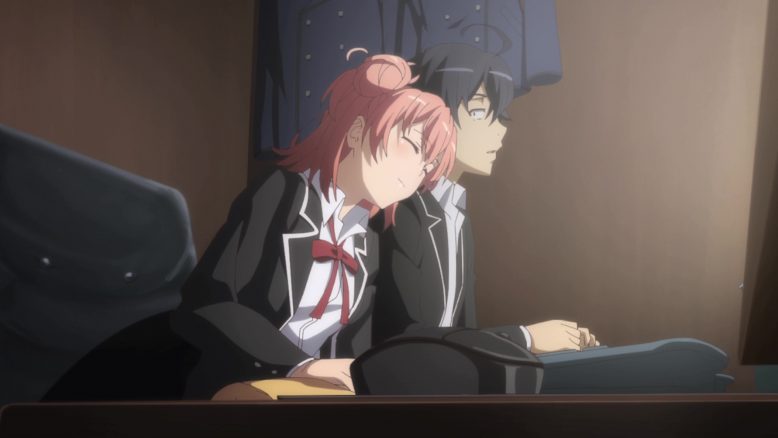 Of course, while both girls assume that he means a “relationship” what Hachiman may have wanted is a true friendship. We don’t really know, and its super complicated. Complicating things further, of course, is Yukino’s whole issue with her mother.

We skirt around it this week, but its clear that the person actually blocking the prom is none other than Yukino’s mother. Which, man, you have to be messed up to come in and try and sabotage something your own daughter is doing, but there’s definitely moms like that out there. To that end, Yukino’s whole thing at the beginning of the series was that she wanted to face her family issues first, before she jumped into resolving the weird love triangle situation with her two friends. 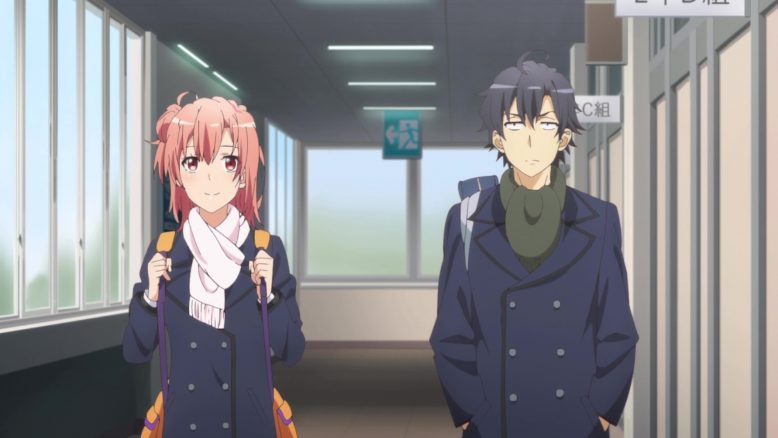 Yukino is difficult, and this episode is basically Hachiman working around her weird personality to try and get everyone past this. Yukino needs to solve her issues before she can deal with her friends, but she refuses to ask help from them. Hachiman? Well, he can’t just sit idly by and watch her self destruct. If she does, then well, there’s no hope to continue forward, is there?

Its complicated for sure, and I sympathize with the “not really a bystander” in all of this, Iroha. Its clear, as well, that Iroha has feelings for Hachiman, and its also clear that she realizes that she can’t actually carve a space for herself when there’s two other girls that are closer to him. Yet, the pain and frustration that she feels at seeing Hachiman try so DARN hard for these two girls that she knows? Well, its tough man. 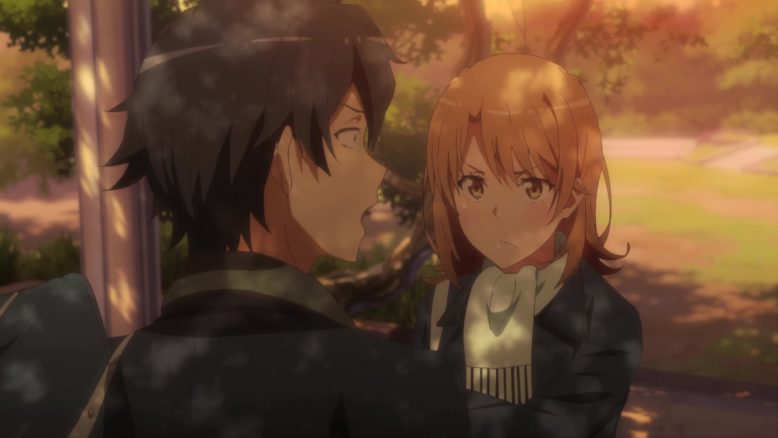 I’ll end by saying that the whole reason this situation is being dragged out as long as it is, is because of Yukino. Yukino is just taking her sweet time to get mentally ready for settling things with her two friends, and its honestly both exceedingly selfish and just plain unfair. As Yukino procrastinates on dealing with her larger issues by tackling her smaller ones, Yui and Hachiman continue to suffer on the side.

So its nice, to actually see Hachiman refuse to let that go on and jump into the fray. He obviously doesn’t want to hurt either girl  and so he’s trying his best to keep them all sane by the end of it. Unfortunately, none of the tree people involved in this situation are communicating openly and honestly. Everyone wants this happy situation to emerge, and yet no one save for Hachiman is actually doing anything. 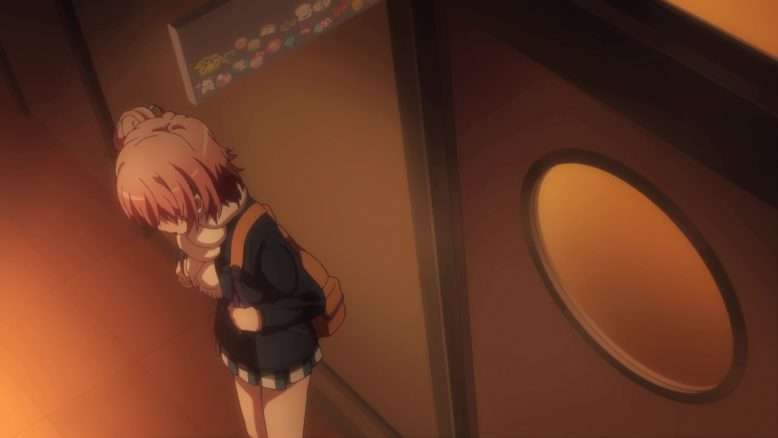 At the end, its funny, but Yui and Yukino are both doing the very thing they hate; they’re silently and maybe subconciously hoping for Hachiman to come up with some weird solution to this problem. The problem is, however, that no clean solution exists. Thus, the most likely scenario is a bad breakup of this friend group, as they transition into adulthood and the next stage of their lives.

Maybe Yahari and Watari-sensei have some other twist prepared, but if this is being prepared and played straight, then we’re slowly trucking towards a rather bitter ending.