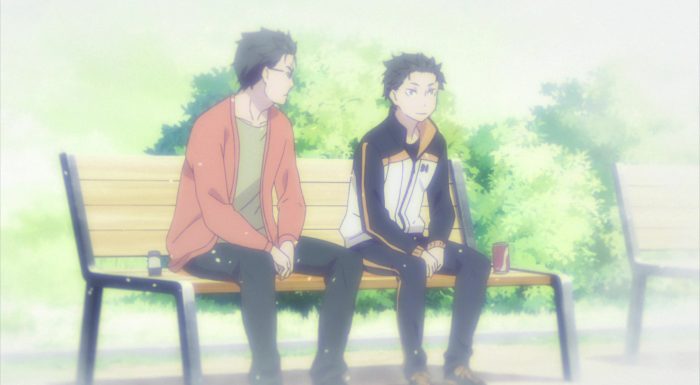 Some of the best stories that exist today will often have a dose of reality mixed in with the fiction and the fantasy. This week? Re:Zero got real, and tackled a real world issue in a way that, I think, both developed its protagonist, and also gave some insight into one of the core issues facing the society in Japan today. Its always a huge risk for entertainment to try and tackle issues that are real world problems, especially ones that don’t have very clear solutions. The risk of course, is in either sounding condescending, judgemental or simply seeming ignorant.

Yet, what makes this week’s episode so strong is the fact that it actually takes a very nuanced look at the issue of the Hikikomori in Japan. The reasons for why someone would decide to become a recluse are never simple, and at the end of the day, the underlying issues responsible are unique to each individual. By showing us Natsuki Subaru’s unique situation, Nagatsuki-sensei has probably highlighted the issue in the best way that a light novel can. 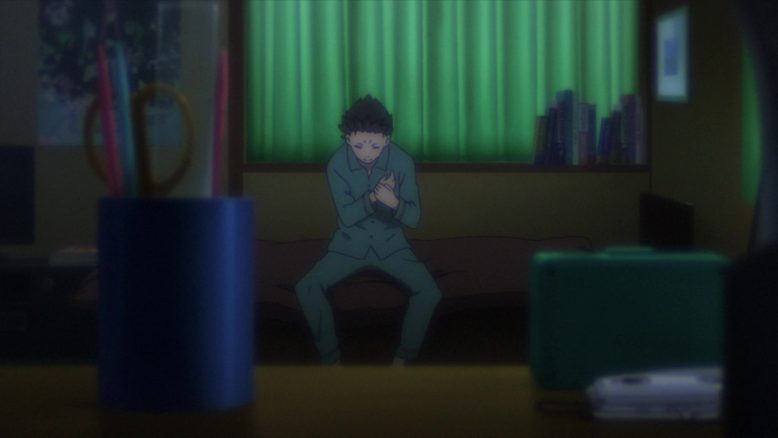 When people go through psychological or mental issues, the underlying reasons and how to fix them are rarely clear. As someone who himself battled depression in his teenage years, Subaru’s story really resonated with me, on a personal level. My issues weren’t exactly familial, like his, but the slow drop into depression and reclusiveness, is something I understand really well.

What’s interesting here, is the fact that Subaru actually worked through his issues this week. Subaru recovered from his depression, and it happened not because of the people in his “real” life but because of external factors (i.e his experiences in Re:Zero’s world). Some people really do just need either a change in environment, or some kind of shift that forces them to change. In Subaru’s case, that was ultimately dying and heading over to the world of Re:Zero. 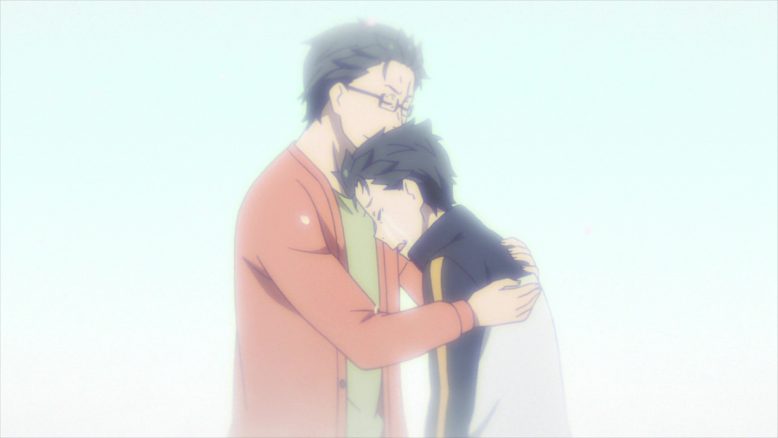 And while that’s a solid and great moment for Subaru, there was also a real undercurrent of tragedy here. No matter what Subaru does, or how much he comes to term with himself and his family, he can NEVER go back to his parents. Parents, that ultimately, were really awesome and supportive I might add. Sadly, the fact of the matter is that Subaru is dead in his world, and his parents are probably grieving over the loss of their son.

That moment at the end, when Subaru finally realizes how he left off things as he ultimately died? That’s harsh stuff, and it shows that despite it all, Subaru really does understand what happened. The tears and the crying with each of his parents, is genuine because of how real the situation is. Subaru knows he isn’t going back, and that he has nothing more to do at this point, except LEARN from his past. 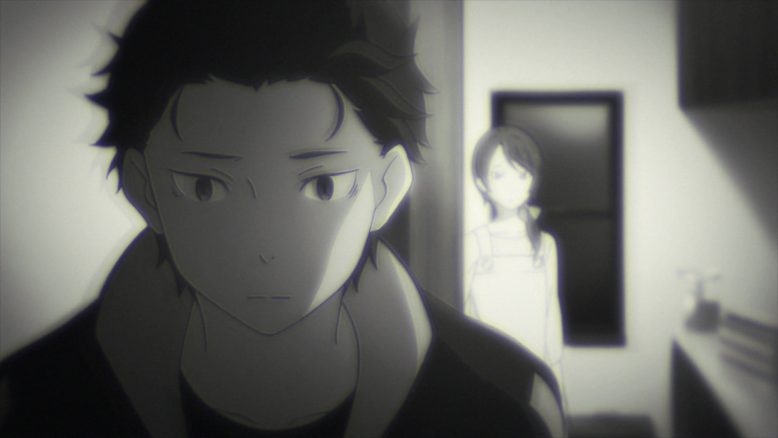 For a character that’s already gone through so much, this is an extra dose of pain, albeit pain that helps in his personal growth. And the fact that this sad undercurrent, isn’t openly touted to the audience, is where I think this story tends to respect both itself and its audience. There is, I’m sure, a segment of the audience that’s never going to get just how monumental and impressive Subaru’s realizations in this episode are. Accepting that you died, and that you will never see your parents again, especially after how badly you left things? That’s hard man, and I’m not sure many of us could ever handle that.

But that’s what makes Subaru such a likeable protagonist of course. And with this one episode trip into his origins, his family and his issues as a Hikikomori done with, I think the show has left us with a much more wholesome character in turn. 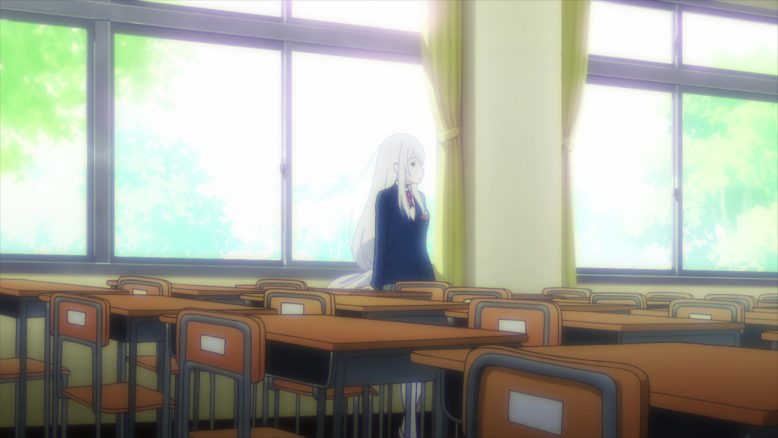 Now, the bigger question is around Echidna. Why exactly, did she send Subaru through this journey of self growth. Why help Subaru confront his past? I’m not entirely sure. I guess… I’m just waiting for the other shoe to drop and for Echidna to really bring out whatever her plan is. Echidna scares me, and she gives off a vibe that I think is indicative of some of the scariest wild card characters I’ve seen in media.

I don’t get Echidna’s angle, and yet I can tell that she’s really not Subaru’s friend here. Conveying that? That’s really solid character writing AND voice acting. Maaya Sakamoto is just really bring her A-Game to what is already an exceptional cast. 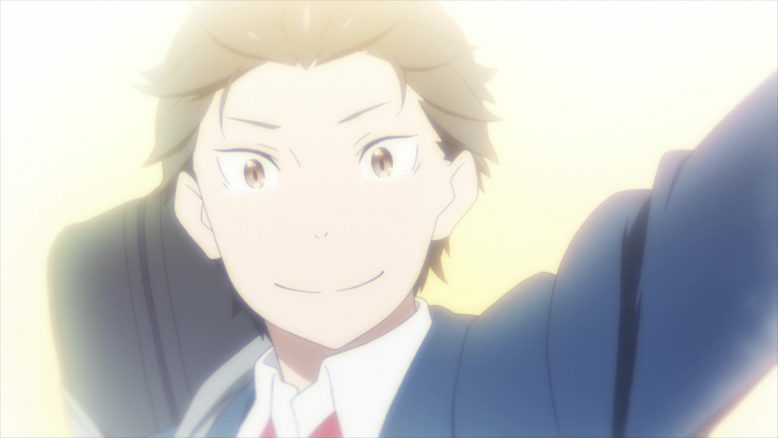 And so, I suppose that’s where we’ll end it this week. Subaru has some real added depth to his character now, and the exploration of his Hikikomori problem and how it influences him, is a welcome one. I’m curious to see where Re:Zero takes this, because it really INVESTED time into building Subaru up for whatever is coming his way next. I honestly love episodes like the one this week, and my praise, excitement and appreciation for Re:Zero continues to grow.

We’re only 4 episodes in, but this is already starting to look like a series that may surpass the original. I certainly expect this groundwork laid down over the course of the last few episodes to really yield dividends in the future. And now the wait begins again, for next week’s episode.