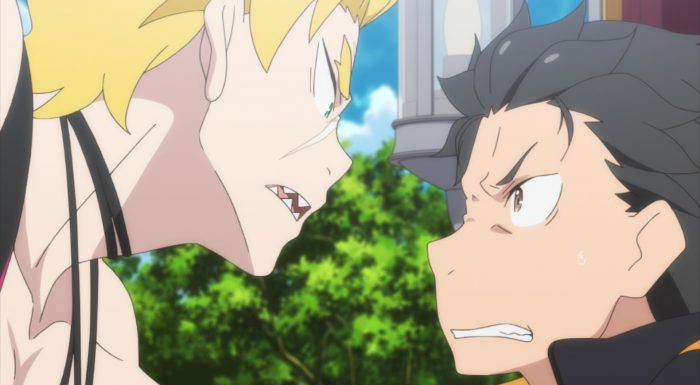 Sometimes, a real sense of delight can be found in the unexpected. Re:Zero has already both met and exceeded the expectations of its audience and fanbase with its first two episodes, so the next step for it is clear and simple; Subvert expectations cleverly. 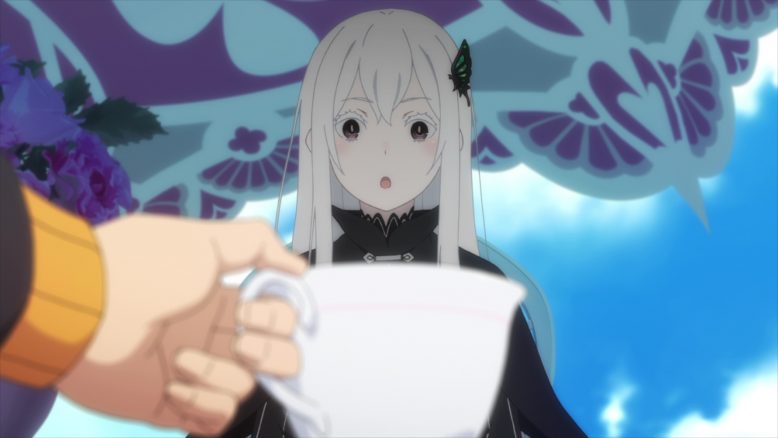 With the way the show threw us right into the thick of things, and even gave protagonist Subaru a decent dose of despair, one would expect that more of the same would have followed. That’s what the first series did after all. And of course, Re:Zero 2 with its return, felt like it was picking up right where the previous season left off. Yet, in episode 3 this week, we find ourselves in a very different place than I think any of us expected.

This week’s episode? It was first surprising, then relaxing and then finally threw a major curve ball at the end, one that signals a drastic change in direction, at least temporarily. Its kind of beautiful really, giving the audience a breather and a lore building episode when we’re least expecting it. The show and franchise has trained us to expect things going from bad to worse, and its after all that hard work, that it can do episodes like this.

And make no mistake, this week’s episode is both important and really foundational to what will be coming forth later. Last week, I mentioned that Echidna (The Witch of Greed) was actually Satella or the Witch of Envy. Yet, as was both pointed out in the comments by Miro, and by the events of this week’s episode, that was a pretty huge misconception. You’d think I’d pay a bit more attention, but its clear now that there are multiple Witches in the world of Re:Zero, and each seems to be associated with a particular sin. Each Witch, also has a “Witch factor” that’s being used by potentially an arch Bishop, somewhere in this world of magic and fantasy. 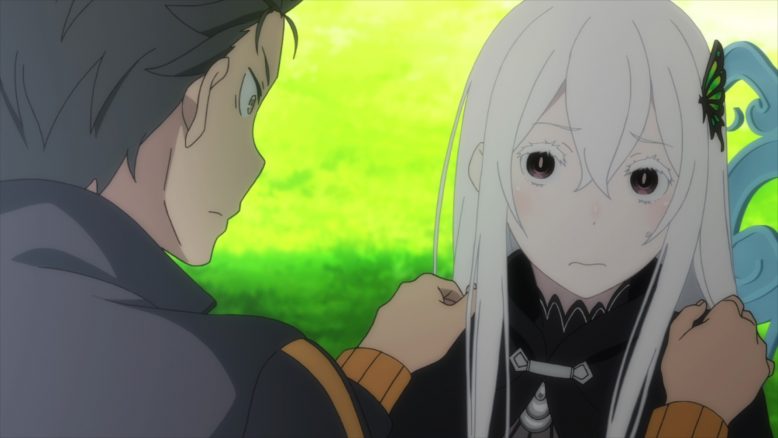 And Echidna? Well, while I still largely suspect that she’ll be serving an antagonist role eventually, she didn’t seem all that threatening this week. In fact, her conversation with Subaru was funny, interesting and informative. More so for us the audience, and less so for Subaru since he completely forgot the conversation and its details, as soon as he left “The Witch Graveyard”.

Which, color me surprised, that Echidna is actually dead, and only communicates with Subaru through a sort of spiritual realm. Its clear that she’s trapped in this zone, which seems to be related to both the Sanctuary that Subaru and Emilia are heading towards, but also in some way, to Satella The Witch of Envy as well.

Speaking of “Witch”(pun totally intended), the big reveal this week, is that Satella actually killed all the other Witches, and then “used” them for her empowerment and sustenance. It seems like, in the mythology of Re:Zero’s world, Witches are actually the beings that granted humans various things like emotions, lust, knowledge e.t.c. And then, after all that was done, Satella came in and basically eradicated all her counter parts, before finally somehow connecting to or residing in Subaru himself. 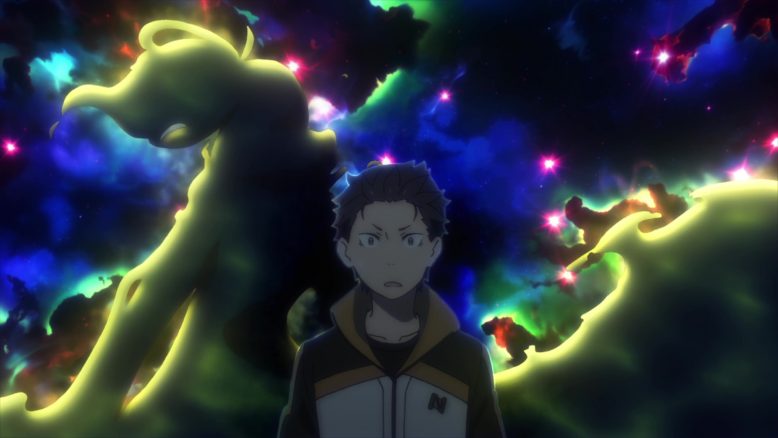 Its an interesting concept, Subaru being connected to Satella, because it actually puts Subaru at the center of the larger foundations of this fantasy world that he’s in. The fact that he has Satella’s power is a huge deal, in some ways. It also means that Subaru as an entity, has a role to play that’s perhaps complimentary to the role that Emilia wants to play (i.e ruler). Both are central figures in the dynamics of this world, and its interesting that Subaru is now shifting from the typical Isekai protagonist that’s just a visitor, to someone who directly impacts the world. And all of that? It was true before we even found out about Subaru having the Witch factor of Sloth (After killing Beltogese).

And with regards to Re:Zero, I don’t think I’ve commented too much on the Isekai (Stories where people from our world find themselves in a fantasy world) aspect of the series. Isekai, as a term, has almost become somewhat of a slur, as shows in that particular genre are typically, pretty generic. Re:Zero though, is one of the originals that made the genre so popular to begin with. As such, it isn’t stuck in convention like a lot of the shows that it has since inspired. So for me, Re:Zero is not your typical Isekai story, and therefore not really viewable from that kind of lens.

Its stuff like the world building and dynamics of this show, that make it so darn interesting and a cut above the general “Isekai trash” that people have come to loathe. I mentioned the unexpected earlier, and the fact that Subaru not only doesn’t get destroyed by Echidna, but actually leaves her without any issues, was certainly…. Surprising. Even more surprising, however, was how easily Subaru was able to reach his goal with Emilia in tow, after he returned to “the physical realm”. 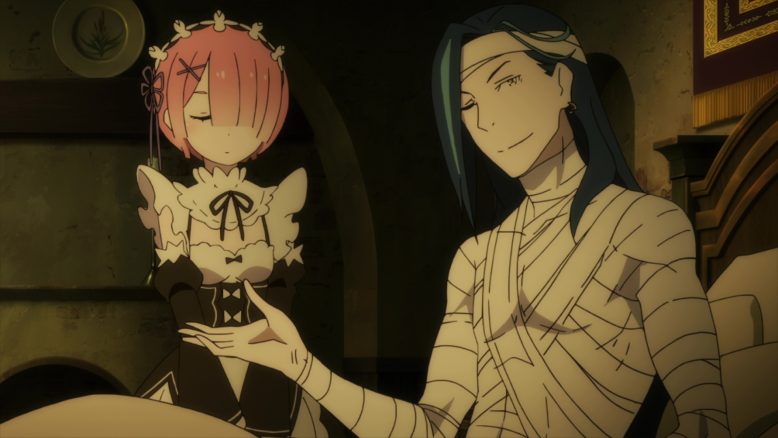 Again, the plot idea here isn’t altogether too dire or drastic. Subaru and Emilia get “trapped” in the Sanctuary, where Demi-humans are unable to leave once they enter. The Sanctuary, or so its called, is actually the area where Echidna actually originally died, creating a barrier that prevents any demi-human from ever leaving. Which, essentially, is why we find both Ram and Roswaal stuck there, unable to leave.

The idea of Emilia needing to clear a trial to open up the barrier, makes a lot of sense, from a generic storytelling stand point. Of course, what we know from Subaru’s previous conversation with Echidna, is that he too received the right to be able to face that trial from her. And the trial? Well, that’s when Re:Zero really throws the final twist at us.

And the twist? Well, its Subaru seemingly returning to the “real” world. See, one of the big hallmarks of the “Isekai” genre these days, is that the protagonist almost never actually goes back to or interacts with their “normal” mundane life. Yet, the trial, as it were, actually sends Subaru back, seemingly, to his world. A world, where his bare chested dad immediately tackles his then sleeping son. Its clear that Subaru’s eccentric nature, comes from how darn weird his dad is, but what other secrets are in store for us here?

Where does this lead? I’m not entirely sure. Is this a “flashback” arc so Subaru can confront his past like the voice tells him to in the Sanctuary trial? Or is this him going temporarily back, and coming to terms with just how much his life has changed? Time will tell, but I honestly didn’t expect this little excursion into Subaru’s past life. You’d think a story telling idea like this would be common sense in this kind of story, but we’ve rarely if ever seen this before. 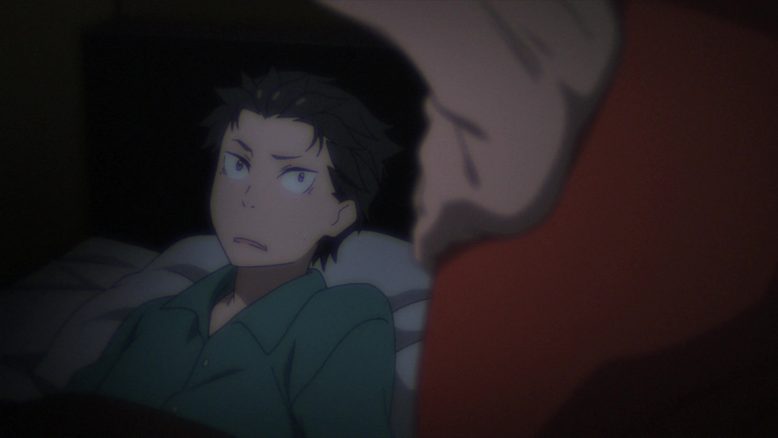 Which, in essence, shows us just how little Re:Zero is confined by a particular genre, and is actually just a really solid story that explores interesting ideas and concepts. I’m curious to see what we learn about Subaru from his past life, and whether the show is going to go on a massive detour, or if this week was just a small pause before things get serious and dire again. Either way, what we’re getting from Re:Zero is interesting and unpredictable. Its GOOD storytelling, which is something that I will continue to commend and laud, given how little we see it these days.