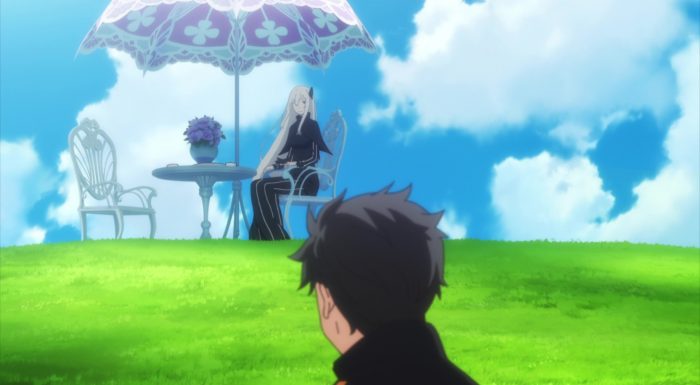 If you thought that Re:Zero would slow down even a bit after its amazing season opener, then this week’s episode has some things to say to you. Great things, good things, interesting things and exciting things. Among all those things, the “thing” that strikes me the most as we go through the second week of Re:Zero II is just how little momentum is being lost here. This is anime at its peak, where each week, each episode feels both plentiful and yet not nearly long enough. We’re only two episodes in, and this may be a bit premature, but I’m feeling a level of excitement each week that I’ve only felt with some of the best shows I’ve ever watched throughout the years. 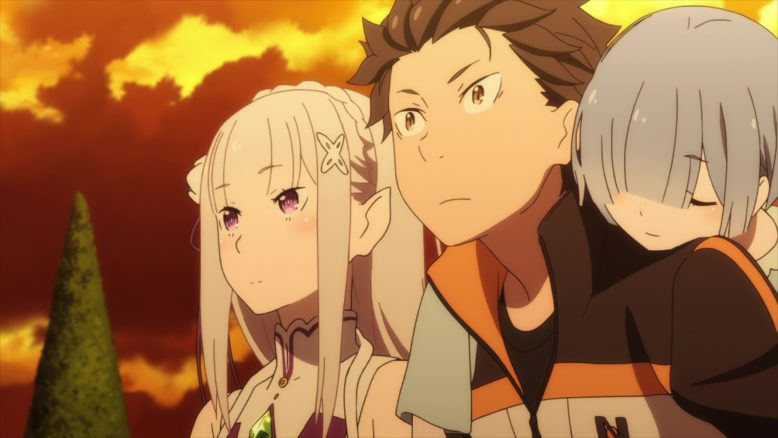 With shows like Re:Zero, each week is an event. The day an episode comes out is the highlight of the week, a moment where life and its all challenges and worries kind of go to the way side. Indeed, while Re:Zero may be a tough show to watch in certain instances, its honestly entertainment at its best. Even in some of its quieter moments, it will keep you on the edge of your seat, and then proceed to knock straight off of it.

Following up from last week, we actually seemingly went into the traditional “calm” period that we see at the beginning of a new Re:Zero story arc, this week. The interesting thing, is that even when the show is “taking it easy”, there’s still a sense of extreme mystery and dread that permeates every scene. As Subaru and Emilia return to the village and Mansion that Roswaal owns, things definitely feel “off” to say the least.

Maybe its because we’ve seen Subaru come back to this place before to very disastrous results, but I felt a sense of real unease as we got closer and closer to the mansion. I half expected some crisis to befall our characters right there and then, but I appreciate the control exerted by the story, of letting things breath a bit. Of course, while things are quiet, they are eerily so, with almost the entire area around the mansion abandoned. Where exactly is Roswaal? I mean, Roswaal has now been gone for a majority of the story at this point, and I’m honestly wondering if we’ll even see him or Ram by the end of this first cour. 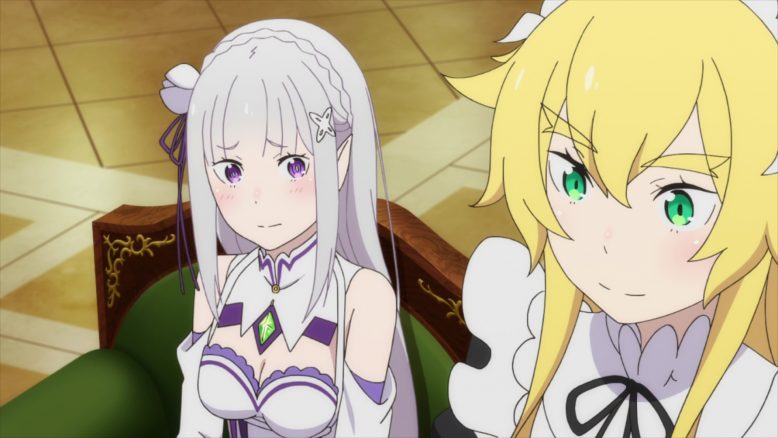 The new Maid in Fredrica is the only person besides Beatrice that’s still at the mansion. I’m honestly a bit surprised that Subaru trusts her enough to leave Rem with her, as we’ve seen in the past that Roswaal’s associates can be pretty darn scary and have their own agendas. Speaking of which, I was not prepared to see the whole exchange between Subaru and Beatrice (Betty) that followed soon after his return.

Betty was a huge ally to Subaru in the first series, but it seems like Subaru’s actions have kind of hurt his relationship with her. Betty definitely has a connection to the Witch Cult, and even mentions Betelguese as “Guese” when she hears that Subaru killed him and took his gospel. All the talk of the Witch factor and the Sanctuary, plus Betty’s own sadness at it all, was definitely excellent at building up the mystery here. It was also, kind of heart breaking.

The audience (I wager),  assumed that Betty had no connection to Satella/The Witch of Greed and her side of this world. Yet, its quite clear that not only is Betty pretty closely linked to the Witch Cult, but that she knew some of them in the past. As Subaru continues to unintentionally go against them, Betty may become either an enemy, or at the very least someone that can’t really support him. Given that Betty’s actually pretty old, it seems that her allegiance to Subaru might have something to do with his “smell” of the Witch, that we heard about in season 1. 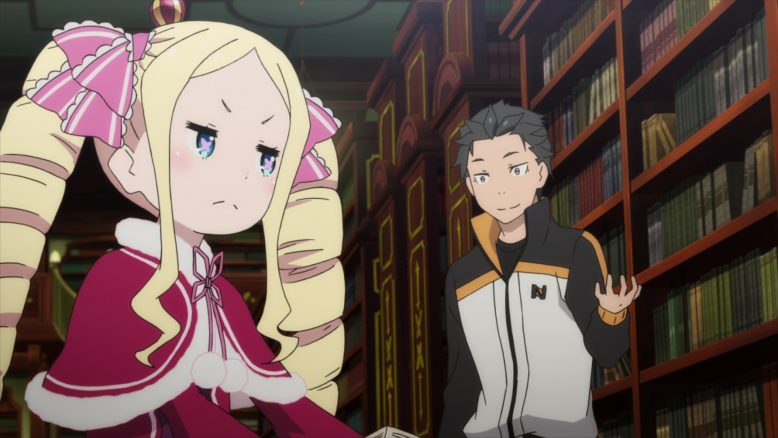 We know that Subaru’s particular Revival power is something related to the Witch of Greed, and its great to see the show start to hint at addressing that larger connection. While the conversation with Beatrice goes quite poorly, she does at least give Subaru the path to get his answers. The Sanctuary, where Ram and Roswaal both are, is the location where all the answers seem to lie. And so, Subaru and Emilia, with Otto in tow, head towards the Sanctuary after some cryptic warnings from Fredrica.

Fredrica, is also the one who gives Emilia the blue gemstone necklace, that is supposed to protect her, but ends up knocking her out and ultimately sending Subaru alone, into what we can presume is the Sanctuary. I’m not entirely sure what Fredrica and Roswaal’s angle is here, but its clear that the sanctuary is some kind of a test. Of course, rather than Emilia getting said test, its actually Subaru who is now primed to undergo whatever weird trial Roswaal has planned.

And boy, do things just ratchet up from here. If you’ve been unfortunate enough to see some of trailers for this second season, then you know what the big deal of this season is. Oh yeah, Subaru gets to go face to face with the one that potentially gave him his powers, Satella/The Witch of Greed. Now… The fact that we get THAT meeting in episode 2, means that Re:Zero II is getting serious. Dead, serious. 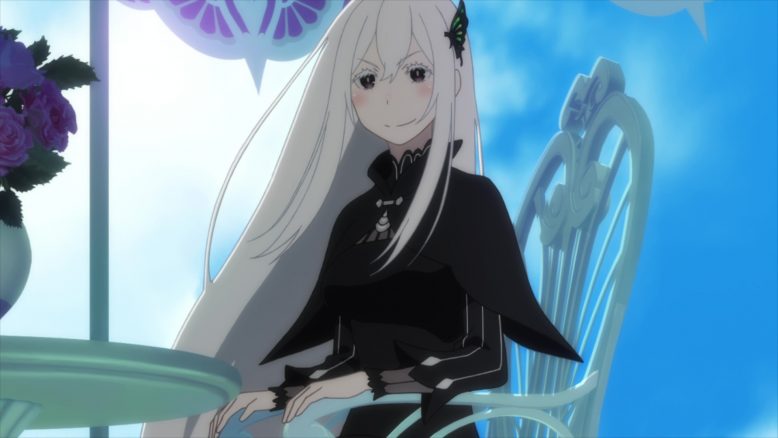 Satella, or Echidna as she reveals herself to be, is going to be the focus of this season. Which, is honestly, awesome for a bunch of reasons. Giving the audience what they crave the most, and getting right into it? Only a brave few stories will just dispense with the distractions and the misdirection, and just get right into it.

I honestly never expected Re:Zero to show us Echidna until the very end. And yet, both we and the Subaru see her near the end of the second friggin episode. The theories and the questions are pilling up with this show, and while I don’t expect the show to reveal it all next week, its at least possible that we’re getting SOME of it sooner than previously expected.

And if the Opening credits (that get revealed at the END of this episode) are any indication, it seems like The Witch Cult is going to be front and center this season. I won’t comment on the stuff we see the Opening, but I will say that I’m really worried for Subaru. 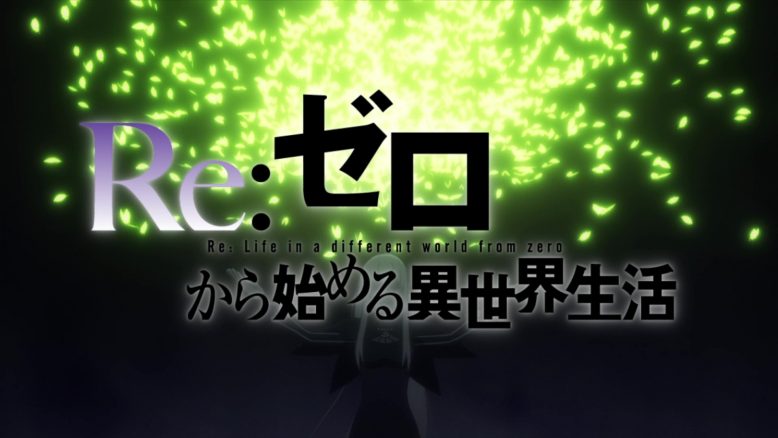 This season seems like its going to have him face off against the Witch Cult, and the odds are definitely not in his favor. Betty has more or less washed her hands of him, Puck is nowhere to be seen, Roswaal is gone, Rem is in the state that she’s in, and as of right now, Subaru’s also been separated from Emilia as well. Calling Subaru vulnerable and alone, is the understatement of the century. How exactly, is Subaru supposed to overcome all of this, at arguably his weakest? Well… If the tone of the opening is anything to go by, then there’s a lot of misery that’s about to hit our protagonist.