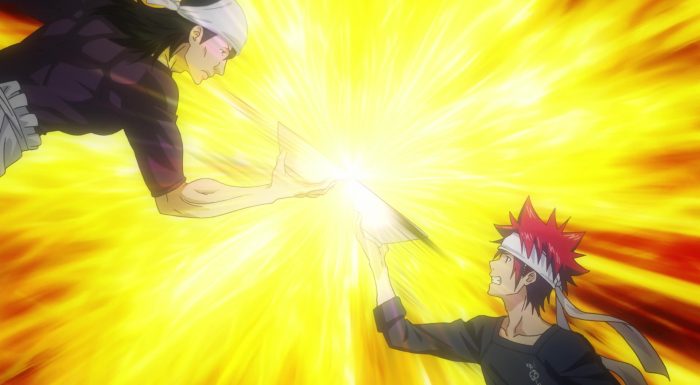 So we’re back once again, for the fourth time even, with Shokugeki no Soma. While jumping into this season definitely felt like not even a second was wasted, unfortunately the speed issue that the franchise has been struggling with since its second season is back and in full force. Calling this latest episode fast paced or even rushed is an understatement; this show feels like its adapting the story with the fast forward button pressed down, HARD. 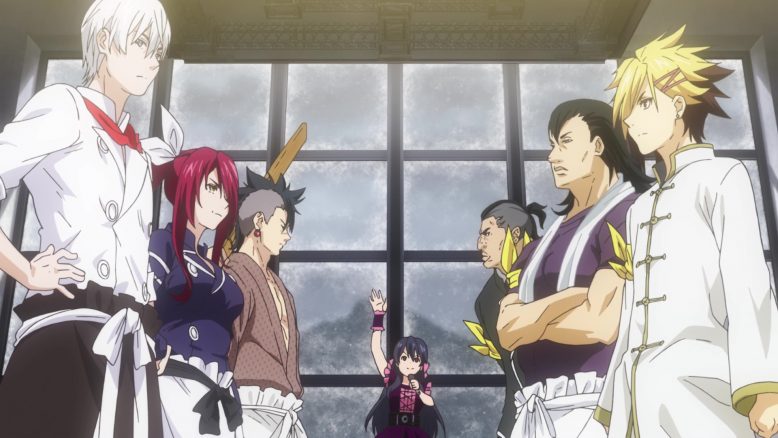 And once again, as is more of a pattern with me at this point, I’m seeing another series and franchise I enjoy, tumble towards its finish and drop significantly in quality. The focus here is more or less on getting the show’s story adapted as quickly as possible, using as few episodes as possible. I’m not entirely sure what the business logic is behind such a thing, but darn if I don’t want to know.

Shokugeki may be the worst offender of a fast paced adaptation in recent memory, but its not the only one. The emphasis and care required to properly tell a story is more or less being lost with the anime medium as a whole, and in particular with the franchises that have become popular. Its baffling to see shows like Shokugeki no Soma be treated this way, and honestly, I’m not sure to what end. 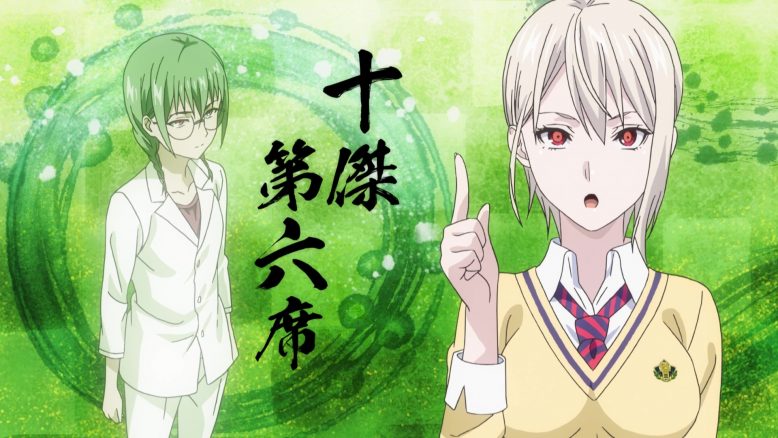 If this is for fans of the franchise, then you can’t help but piss them off. If its for general audiences, then I’m not entirely sure any of them care since we’re in a fourth season now. And of course, the manga itself ended a little while ago, so there’s nothing to push or promote here either. So, as is often the question, with J.C Staff adaptations in particular, I’m not exactly sure why this fourth season exists at all.

I used to really hate the trend a decade or so ago, where Anime series would just adapt a part of the story, and then kind of vanish from existence. For those fans who had grown attached to the voice work, the music and animation, it was always a bit of shame to have to transition to a source manga (if it existed at all, was translated). 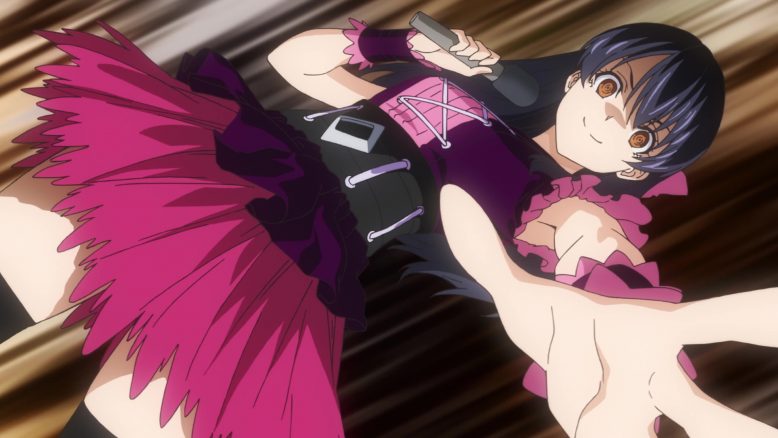 But now that we’re in an Anime industry were sequels are common place, I have to say, I’d almost prefer to not get a sequel if its going to squander all the hard work of its preceding seasons.

This week’s Shokugeki no Soma? It made a strong case for me to just read the manga and forget about watching or covering the anime. I’ve heard that the manga’s conclusion itself is pretty divisive, but that in itself didn’t bother me going into this fourth season. The Azami arc is hated by a lot of people, but there are parts of it that I really enjoyed last season. 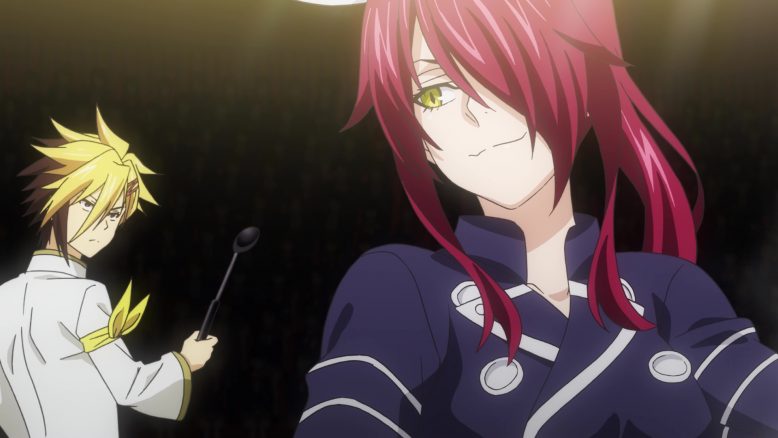 Some of those parts, were really glossed over, and much like then, we got another series of glimpses into story beats that needed an episode or two dedicated to them. This week’s tragedy? It was undoubtedly the whole situation with Soma and the third seat Megishima.

And Look, I get that the story here is a simple one, and that at the end of the day, it probably might’ve “seemed” fine to gloss over it. All Soma did was basically keep persisting until he collapsed, and got Megishima to join him as a result. I get that, but at the same time, the loss here is pretty monumental. 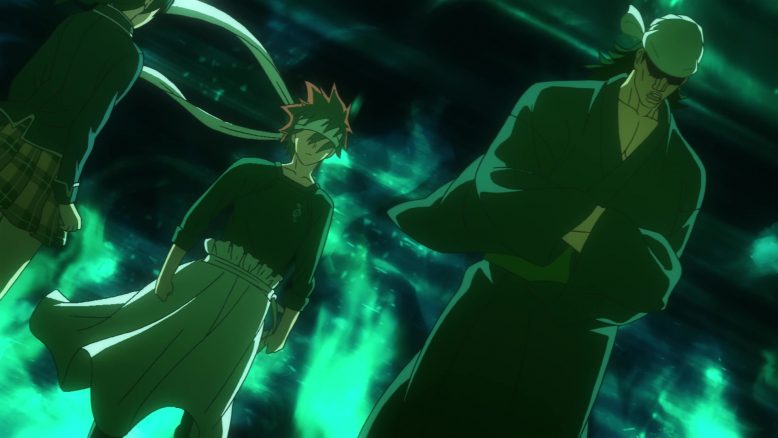 Its worth noting that we haven’t seen Megishima before this point all too much, so this part of the story serves as his introduction. Given that Megishima is part of our team of hero rebels, its important that we care about the guy if we are expected to watch and care about his performance in the Shokugeki that takes place this week.

Since he’s glossed over though, I felt absolutely no attachment to what was happening on screen. Megishima could be a boring as heck character, or he could have some nuance to him, but I as a member of the audience will never know. I will never know, because I was never given a chance to know, and instead was thrust right into the thick of things with the second bout of the Team Shokugeki against Central. 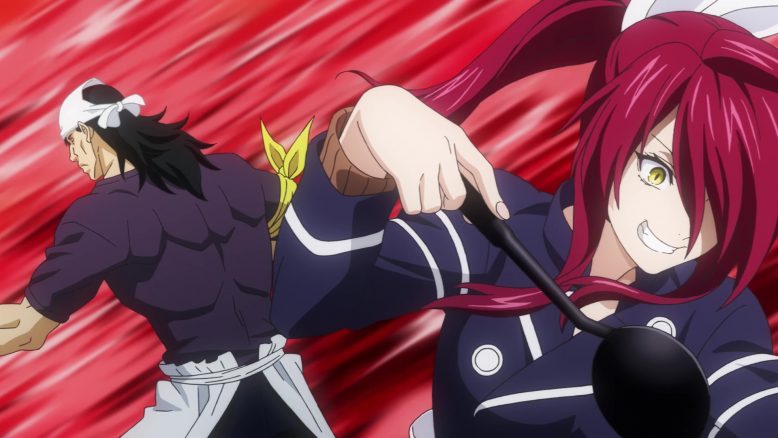 And the result? Well, this entire second bout feels pretty boring and uninteresting. Its obvious that both Rindo (second seat) and Tsukasa (First seat) are going to win, and so really, all that’s left now is to move foward and see what the show throws at us after this.

That’s a sad state of affairs to be in, if only because the tension, buildup and suspense of who will win is a huge part of this show and franchise’s appeal. Yet, the people in charge of this adaptation just aren’t caring enough to really focus on what makes this show successful and are just going through the motions. 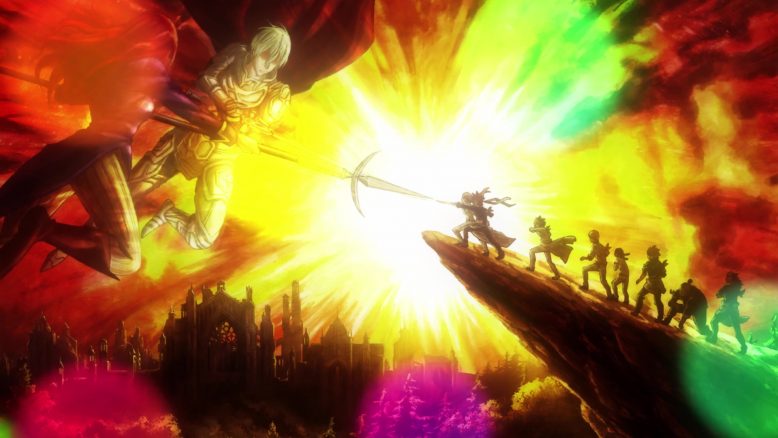 It clear that once again, J.C Staff is being given a pretty small budget, and they’re just willing to work within it and produce the best they can. The very basic opening and the excessive use of static imagery in the episode, kind of points to that. Its nowhere near as bad as To Aru Majutsu no Index III, buts its noticeable enough to where it feels painful.

A part of me wishes that J.C Staff or director Yonetani Yoshitomo would take ownership of their work and push back a bit on whatever production commitee decision is having them stream roll through all the content as fast as possible. A love of the property that you helped create is something that should be valued, both for the fans of that work and for the work itself. The fact that J.C Staff is content with putting forward, rushed, shoddy stuff, points to the fact that the studio has really fallen far from where it used to be. 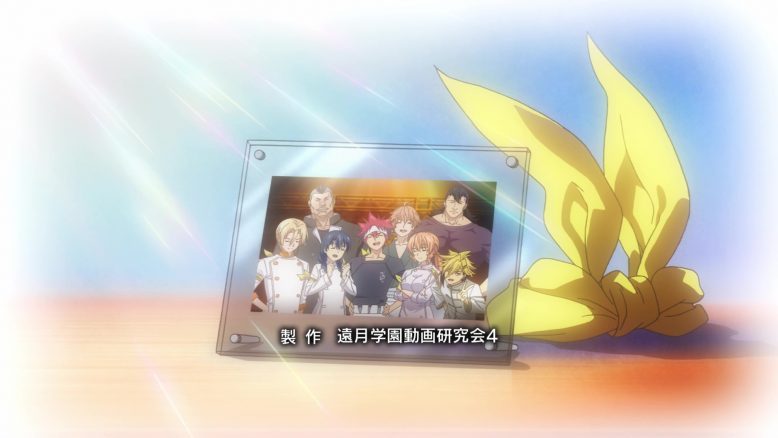 As for me? I guess I’m going to give this show a few more episodes. I feel obligated to cover this show till the end, since I’ve covered it since season 1. If this series continues to just gloss over stuff, however, then I’m going to go ahead and just read the manga. Then I suppose the remaining episodes posts will be very much like this one, except probably even more harsher and nitpickier since I’ll be comparing a lesser product to its source.