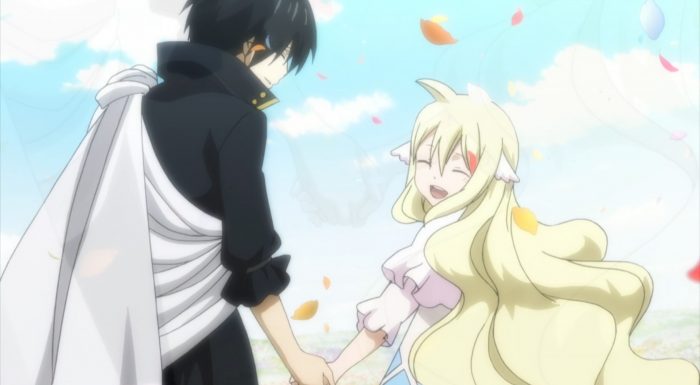 After all this time, its almost unfathomable to behold that Fairy Tail’s Final Season has an episode that’s actually entertaining, enthralling and moving. What’s weird about this week’s episode of Fairy Tail is that it comes off of a string of bad decisions and weird moments. The story leading up to this week’s rather interesting conclusion to a bunch of plot threads, is pretty mediocre and disappointing at vest. And yet… Leave it to both the Fairy Tail production team and Mashima-sensei to provide SOMETHING that actually feels worth watching and experiencing. 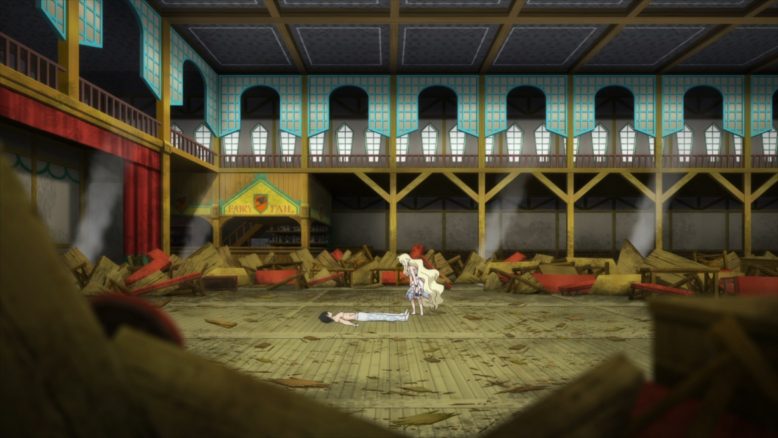 There’s a part of me that just wants to find faults with this week’s episode, and to not really give it the sort of praise that I am indeed going to give it. The reason for that, quite honestly, is because whatever payoff or emotional moments we got this week, they were most certainly unearned. And as far as I know, a story just shouldn’t be able to do this…

A story, in theory, can’t just bungle all its build up, even its climax, and then kind off just completely make you feel emotional and moved in the epilogue bit of the story. I’ve seen a lot of media over my time, particularly and most recently here in the west, with Avengers Endgame kind of try this. Not spoiling anything in that particular movie, I really did feel like that the film was more of an epilogue and a season closer, than an actual solid movie or story. Thus, the so called emotional impact that hit many fans of that franchise? I myself, felt nothing there. 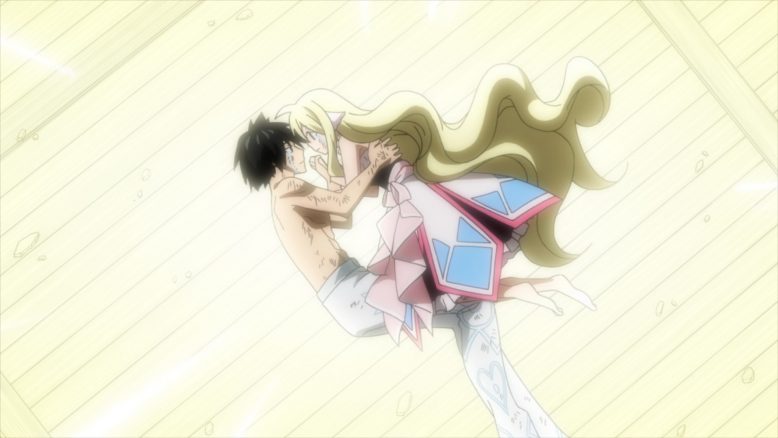 Fairy Tail though? I’ll be honest, this episode… Moved me. I definitely felt something here, and there was genuine sadness, excitement, happiness and a slew of other emotions as the various scenes in this episode played out. There’s three major things that happen this week, and while some certainly work better than the others, they all do hit the notes that I believe they were intended to hit.

The first of those, is most certainly the Mavis/Zeref death scene. This moment, is also the one part of episode, that I’m the most conflicted on. On the one hand, its definitely a sort of lovers double suicide, and the kind of fetishization of death that’s on display here, really bothers me. All this star crossed lovers dying together stuff is just not my cup of tea, and its not something I appreciate. Its honestly just a really unhealthy and unstable way of looking at things. 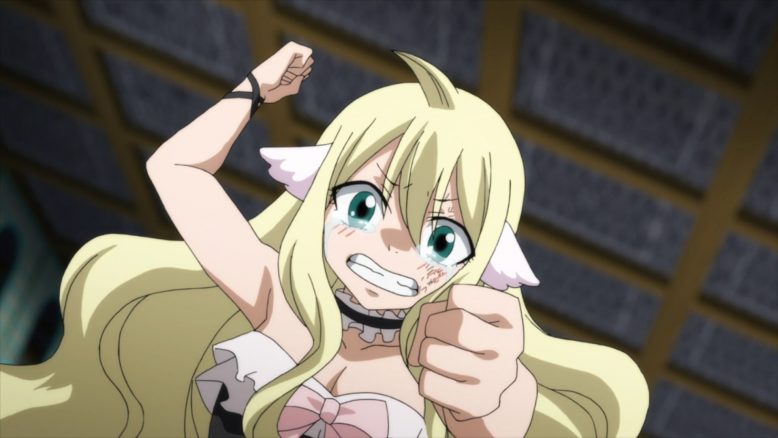 On the other hand, while there’s definitely undertones of that lovers suicide stuff, its quite clear that the situation isn’t exactly the same. Both Mavis and Zeref have been living for a long time, as immortals, and its quite obvious that both of them not only don’t belong in the current timeline, but actively cause problems by just being there.

And heck, I wish I could say otherwise, but Mavis’s little outburst about Zeref was pretty darn beautiful. The conflict that that character has had, her complex relationship with Zeref, its all quite well done and I give serious props to voice actress Mamika Noto for delivering such a stellar performance here. Mavis really does struggle here, as giving Zeref what he wants is killing him, and unlike that depressed idiot, she actually values life and being together. The pain, the conflict here between him being her enemy and the guy she loves, its all just sold really well. 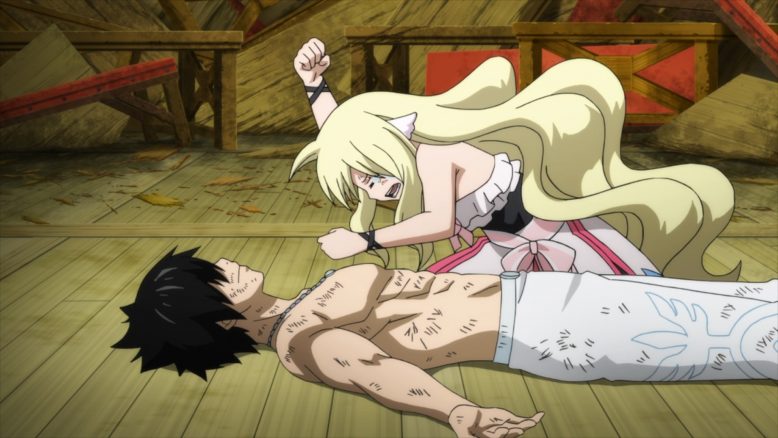 On the flip side, of course, there’s Zeref…. Now Zeref, I can confidently say now, was a real mess of a character. I think Mashima-sensei himself never really got a handle on this character, and he’s just oscillated between so many different personalities and personas, that I don’t think Zeref actually even ever became a true character in this story. Zeref definitely drove the plot quite a bit, and his actions created many things, Fairy Tail the Guild chief among them, but… I just can’t get behind what we saw with Zeref’s character arc.

The guy was depressed and tortured for the entire span of the story, and his end goal was just to kill himself and be done with the world. That kind of thinking, and how happy the dude is when he does die, honestly disturbs me quite a bit. I’ve long held the view that Mashima-sensei has a pretty interesting and positive world view about most things, but the Zeref ending here really makes me question that now. 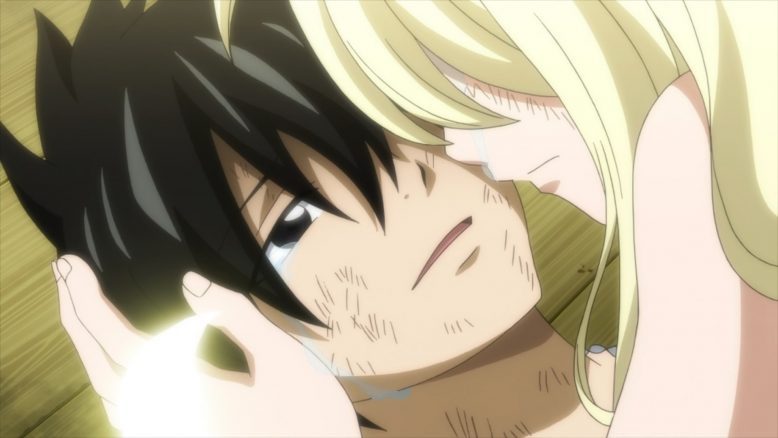 I mean, all Zeref did in the end was cause problems, revive his dead brother, throw him off to Igneel, and then basically wreck havoc on the world until his former lover went and put him out his misery. I don’t feel like Zeref was ever really redeemed, or corrected. He got what he wanted, and while that was ultimately an ending to his life, the fact that everyone from Mavis to Mashima-sensei himself, validate Zeref’s destructive behavior in the end…. Well, it definitely doesn’t feel satisfying, great or fitting.

Which I think, is the weird part here, because despite all the ugliness of the suicidal undertones here, I still felt a tinge of emotion when Makarov came back via the combined power of Mavis and Zeref (at peace and in love). 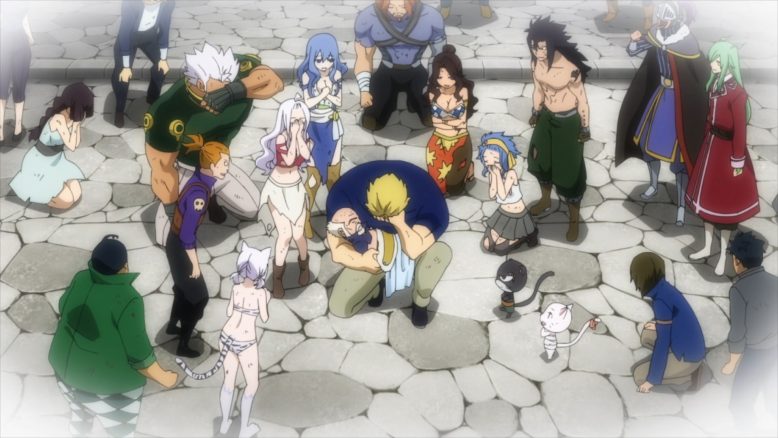 Which brings us to the second string of events, namely, the epilogue following the Zeref battle. I have to say, Makarov coming back actually kind of worked for me here. The price here felt appropriate, as did the way it all happened. Makarov being saved by two immortal lives going out, well, it kind of feels fair and right, in the context of Fairy Tail and its world. It isn’t a dues ex machina like what we got with Gajeel before. There’s a pretty heavy cost associated with this particular revival and that is what makes all the difference.

But of course, while the Makarov thing is a nice little moment that works, its the Natsu stuff that really is superb. If the Zeref stuff from earlier hadn’t been as dicey as it was, I’d have given this episode an A+ grade, or perhaps even an S grade, just for how well done the Natsu stuff really is. 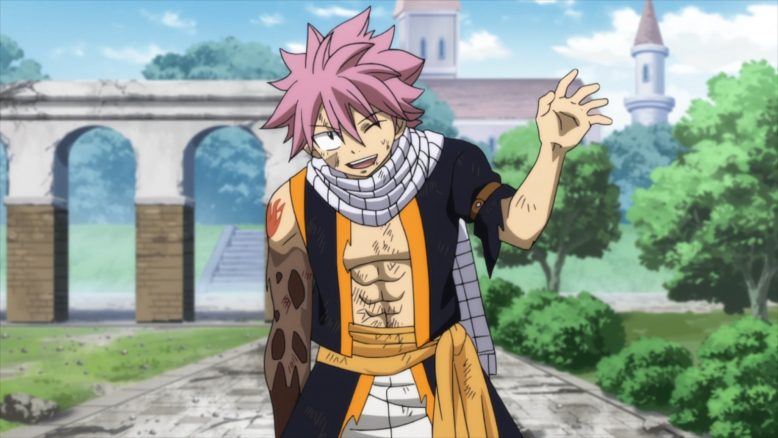 The way the show just goes through with Natsu’s fate is just, storytelling at its best. We see Lucy, Gray and Happy really struggle to rewrite Natsu’s END book, and there’s a sense of real danger for Lucy throughout it all. We also know from the last episode, that Lucy rewriting Natsu’s END book, DOES work. Natsu beats Zeref because of that, after all. The book then disappears, and there’s a sense of anticipation for Natsu’s fate, Then of course, Natsu shows up following the book itself disappearing, and the scenes that follow are just, something else.

Natsu and Gray going back to their old dynamic, the hugs and tears of relief, its all really nice. And what follows is a scene that feels like its right out of an older chapter or episode of this very story and franchise. Natsu and the rest have just taken care of the latest crisis, and they’re all kind of taking it easy and looking forward to what life offers next. Lucy talks about her goal of getting Aquarious, Gray mentions Juvia, and Happy makes his usual bad fish jokes. Even the music in the background is a lighter, relaxed track that really normalizes everything. 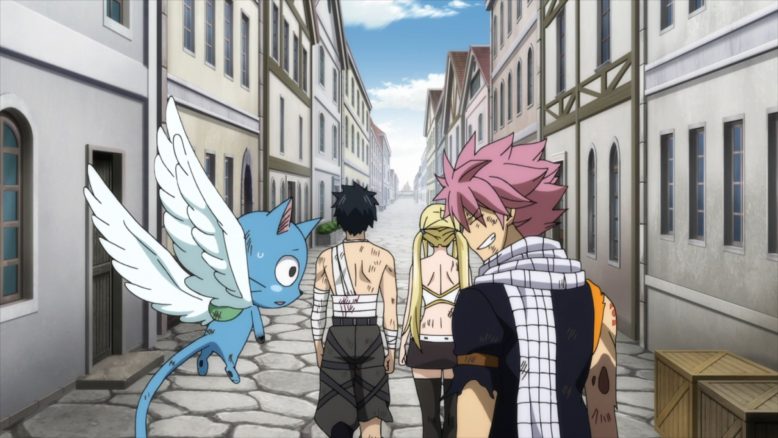 But then, after a few moments of levity, everyone realizes that Natsu hasn’t been speaking for a while. The silent, almost sudden way in which Natsu disappears, is just chilling. Its a certain brand of psychological horror that just works really well here. The silence, followed by the panic and then the despair, it all just hits, and it hits hard.

Beyond the tragedy of the moment itself, its worth noting that this all feels kind of fair. Natsu not surviving after Zeref’s disappearance is something we’ve been told about since the beginning and despite us probably not wanting that to happen, when it does, it feels almost like it was inevitable. 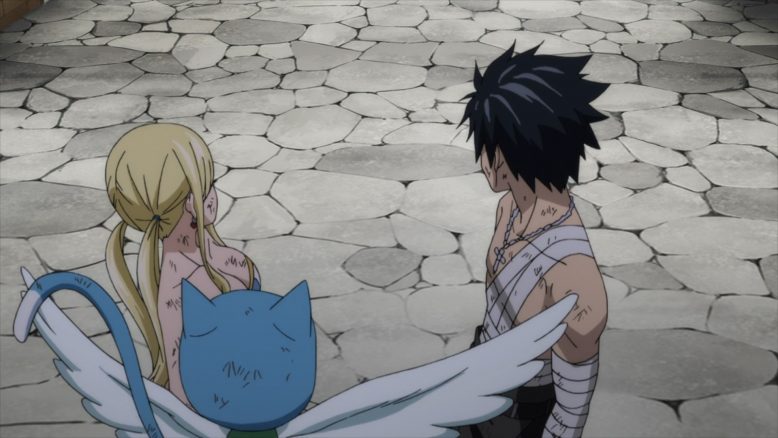 Giving the audience an almost believable moment of respite and happiness, and then taking Natsu away from us? Man, that is just powerful, powerful stuff. I was beyond shocked that it happened, and that both the anime and Mashima-sensei in the story itself, pulled it off.

And the icing on the cake here, is the final moment of the episode, where we see the a crack in the sky above where Erza, Jelllal, Wendy and the rest are. There’s again, that sense of dark horror, of things really going to hell, that just feels really exciting and powerful. 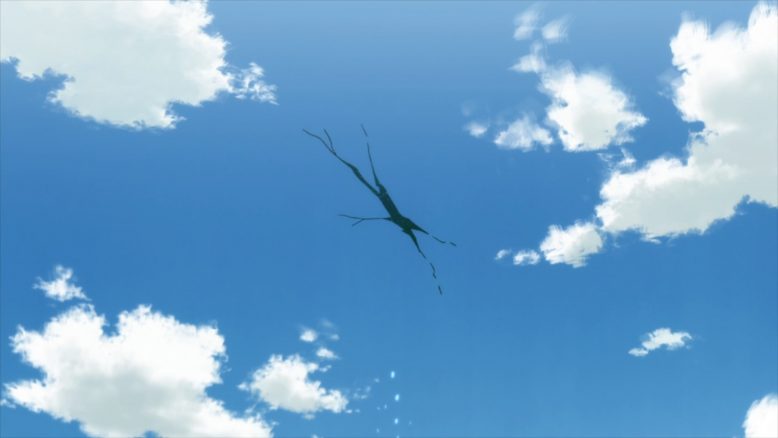 Not only is Natsu gone, but Acnologia is very much not. Anna and the rest most certainly failed here, and now Fairy Tail has to deal with the most powerful being of all, without Zeref, Mavis or Natsu around to basically take care of it. Heck even stronger characters like August and Irene aren’t around either, so it just means that the situation is extremely dire.

All of this, really amounts to a rather exciting turn of events. How exactly are Fairy Tail going to deal with this? How is Natsu going to be brought back, if at all? Is it going to be enough to defeat Acnologia? There are really exciting questions that I’m really craving some answers to. 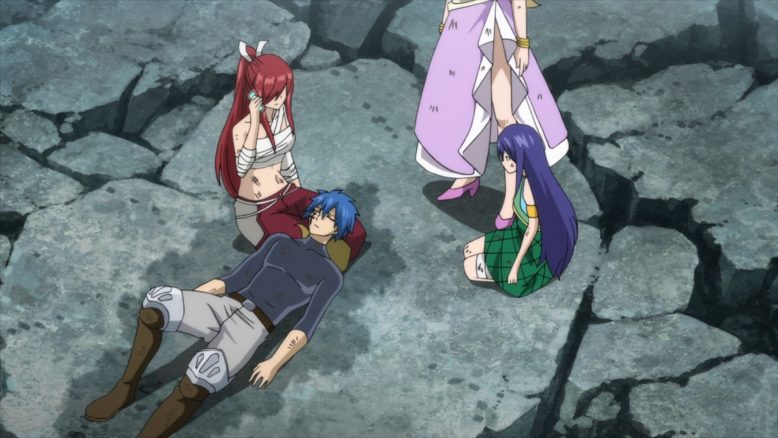 Now granted, I fully expect the answers themselves to not be too impressive, especially given that we’re 3 episodes away from the series ending. Whatever is going to happen here, its going to be quick and rushed, and I doubt it’ll feel satisfying. I know that because of the episode count and because of what this show has done thus far.

But, a part of me, just wants to really enjoy the moment. Fairy Tail made me feel everything I used to feel for the show, one last time, before it goes away for good. I didn’t think I’d get that, so I guess a part of me is really glad that I did, in whatever form I got it in. Do I wish the entire season was like this episode? Heck yes. Do I know that Mashima-sensei had the ability to do it? Sure. And I think those very facts are why this 47th episode of the show is both so enjoyable and vexing at the same time. 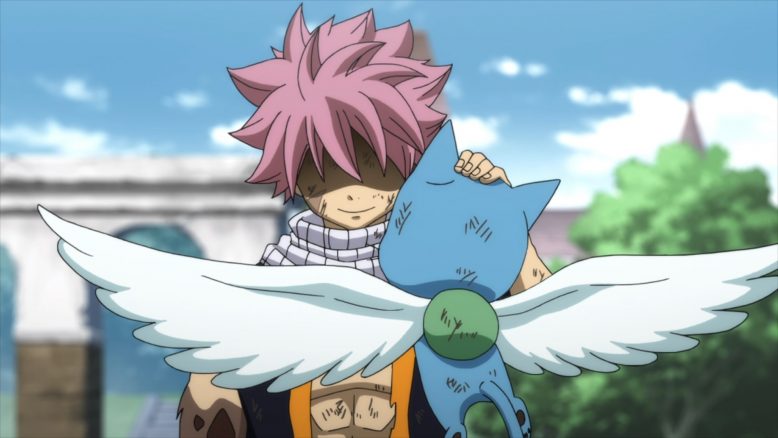 This episodes gives fans of the series what they’ve been craving for, since the Tartaros Arc ended, but only very briefly and with some muck bundled in there. Does that save this Final Season and the story overall? Definitely not. Definitely not, but I guess it was good to watch a solid episode of Fairy Tail again, one more time, before the franchise finally wraps it all up.